Once again with some help from my friend, Ron Brown , today I am going to delve into the world of lighters and provide you with what you need to know about lighters and lighter fuel for survival. 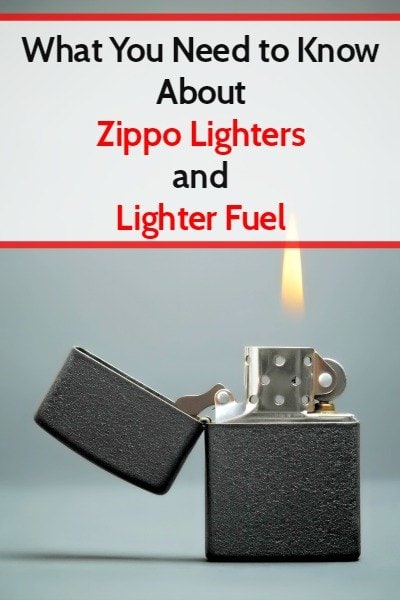 The Mystique of Zippo Lighters

What I am going to say in this article was inspired by this honest to goodness dialogue I had online:

“I’ve inherited an old Zippo cigarette lighter from my grandfather. Can I use charcoal lighter fluid in it?” 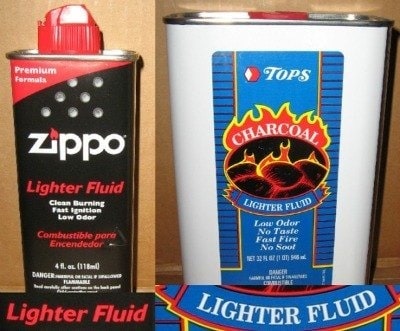 It’s like a discussion with my wife about cheese balls. To me, a cheese ball is made from semi-soft cheese, is the size of a baseball, and is rolled in crushed nutmeats.  To her, cheese balls are the size of marbles, made of puffy cheese-curl stuff, and contain orange dye that sticks to your teeth. Both are popular at parties.

The Internet question “Can I use charcoal lighter fluid in my Zippo?”  received an Internet answer (but not from me):

“If you fill a Zippo with charcoal lighter fluid, you can kiss your eyebrows and nose hairs goodbye. And any other part of your anatomy that’s close to the explosion when it occurs.”

That answer is 100% wrong. It was followed immediately by a second 100% wrong answer: “Charcoal lighter fluid in a Zippo? No way. You must use butane.”

And a response: “Well, I finally got my Zippo apart but I still can’t figure out how to put in the butane.”

My take?  As Albert Einstein said, “The difference between stupidity and genius is that genius has its limits.”

Zippo lighters were patented in 1936 and saw their heyday with the GI’s of World War II. Zippos used liquid fuel (white gas). The tiny fuel tank was stuffed with cotton fluff so that the liquid didn’t spill into your pocket. A wick brought the fuel to the flame by capillary action.

Zippo’s reign as king of the lighters ended in 1973 when Bic introduced disposable butane lighters that could provide 3,000 lights before wearing out. How do you spell, “Goodbye Zippo”? Answer. “Flick my Bic.”

Judging by the Internet, people born after 1970 may have never seen a Zippo-style lighter. They sincerely believe that butane is the one and only fuel ever used in cigarette lighters.

So we need to understand butane a little better . . . 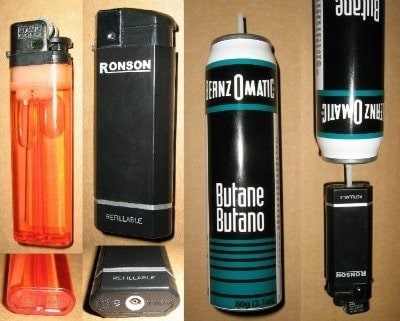 You can get the butane out of its canister by:

The butane comes out as a liquid but you can actually see it bubbling as it boils away. It will volatilize into the atmosphere far too quickly to be of any use in your Zippo. And you won’t like the way it smells either.

And Then There Is Charcoal Lighter Fluid

WRONG! But where does the idea come from that charcoal lighter fluid is explosive?

IT STARTS HERE: In an effort to hurry things along, charcoal lighter fluid is sometimes sprayed on a charcoal grill that is already burning.

Note: Let us be clear here. We’re talking about a CHARCOAL grill, not a GAS grill!

The lighter fluid doesn’t break into open flame because the burning charcoal itself only glows; no FLAME exists to ignite the fluid. (And ignition does require a flame or a spark. Don’t you remember dowsing your cigarette in a cup of gasoline to impress the girls?)

But, although no ignition takes place, the fluid gets hot. It begins to vaporize and smoke. It goes above its “flash point” but there’s still no flame to set it off. When it reaches its “auto-ignition temperature” (i.e. 473 degrees F where a flame is no longer required) – POOF! 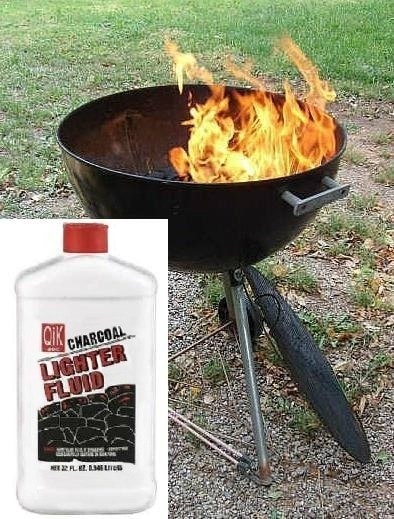 This is Ninth Grade science.

Side note: To those not familiar with the term, “mineral spirits”, it sounds like it’s plural. It’s not. Mineral spirits is singular. It does take some getting used to.

Zippo lighter fuel is highly volatile. Technically it is flammable. It readily evaporates. At room temperature, vapors are always present that can be ignited with a flame or even a spark.

For all practical purposes, charcoal lighter fluid does not evaporate at room temperature and is termed combustible. Vapors are too few and far between to catch fire. Like candle wax, it must be preheated to the point of forming a vapor before ignition can take place. A match performs the preheating function as well as the ignition-of-vapors function.

As fuel in a Zippo, charcoal lighter fluid, like motor oil, will not work. Spinning the striker wheel will create a shower of sparks but the sparks won’t produce enough heat to vaporize the fuel. The lighter will not light, much less explode. Your nose hairs are safe.

How To Fill A Zippo Lighter

But this brings up an interesting possibility. Although we can’t use combustible liquids (diesel fuel, kerosene, mineral spirits) in a Zippo, can we substitute other flammable liquids (gasoline, Coleman fuel, acetone)? Will they work?

“Flash point” is the lowest temperature at which a liquid can form an ignitable mixture in air.  OSHA defines a combustible liquid as “any liquid having a flash point at or above 100° F.”  Kerosene and diesel fuel are both “combustible.”

A flammable liquid has a flash point below 100° F. Coleman fuel (a.k.a. white gas) and gasoline are both “flammable.”

· Let’s start at ground zero. Zippo and/or Ronsonol lighter fluid. Do they work in a Zippo-style cigarette lighter?

· Coleman fuel. Does it work in a Zippo lighter?

No. At least not the way I’d hoped.

The problem is the Zippo wick.

Perhaps it is too small in diameter. Or too big. Or too dense. Or too fluffy. Or the wrong material (Zippo wicks are asbestos). After all, it was engineered to lift one specific fuel, white gas, from the fuel tank to the flame. Acetone was not a consideration.

BUT if you put two drops of acetone (or other flammable liquid) directly on the wick of a Zippo and spin the striker wheel, the acetone will ignite and burn for 30 seconds. And thirty seconds of live flame is not bad. Plenty of time to light a twist of paper or splinter of wood which can then be used to light your candle or your campfire.

· Gasoline (petrol to the Brits).

· Denatured alcohol (used as shellac thinner and as fuel in marine stoves).

There’s an English chap on eBay selling IMCO lighters. Developed in the 1930’s, they’re made in Austria and appear to be Europe’s answer to the Zippo. From the eBay sales pitch:

“These lighters are a great piece of kit, they are more user friendly than a Zippo, cheaper and double up as a candle . . . Runs on Lighter fluid or Petrol . . . IMCO has produced and sold over HALF A BILLION (yes half a billion!!) lighters . . .” 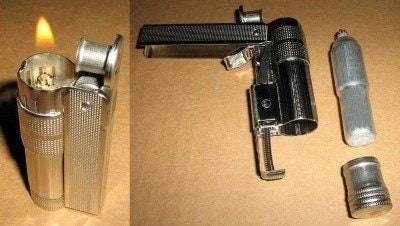 In the interest of article completeness, I bought one. What intrigued me was the possibility of multi-fuel use. And, indeed, with its cotton wick, it operates on gasoline very nicely.

Unfortunately, someone might believe that “These lighters . . . double up as a candle.”

ABOVE Left: The set-up. I inserted the IMCO “candle” in a 5/8s diameter hole so it wouldn’t get knocked over. Center: All is well. Right: This happened suddenly at 15 minutes. Sorry the focus is poor; it caught me off guard.

So there you have it, everything you, as a prepper, needs to know about fuel for your Zippo lighters!

I have been working with Ron for a long time. We first became acquainted when he introduced his Lanterns, Lamps & Candles CD (still available from his website). Later, recognizing that books on CD were not as popular as eBooks, Ron converted all of his material to both print and eBook format. This became his Non-Electric Lighting Series, currently being sold.

And the part about lighters? According to Ron, “Lighters” was left on the cutting room floor along with “Matches” (which I shared a few weeks ago here ).

In a shameless pitch, if you enjoy Ron’s work, I suggest you pick up one of his books. They are reasonably priced and make a useful addition to your survival library. It does not hurt that they are highly readable and written with a good deal of wit and humor.

Here is a link to Ron’s Non-Electric Lighting Series of books on Amazon.

When it comes to lighters, I personally own a dozen genuine BICs, as well as a tray of 100 BIC knockoffs.  The later are stored in my gear closet for use or barter down the road; I don’t trust them enough to carry them in my pack.

I also have a Zippo, plus a dozen or so of those butane BBQ wands.  Yes, I can start a fire with my Swedish Fire Steel, but, as they say, it is a lot simpler to flick my BIC.

Zippo Street Chrome Pocket Lighter:  Zippo has been creating virtually indestructible, windproof refillable lighters for more than 75 years. The Zippo Street Chrome pocket lighter is no exception. This windproof lighter features a classic textured chrome finish and carries the same lifetime guarantee–to either work or be fixed by Zippo free of charge–for life.  All wearable parts including flints and wicks are replaceable.  Every prepper should own at least one Zippo!

100 BIC-style Lighters Disposable Classic Lighter:  These are great to have on hand for both survival and barter use.

10 Pack Refillable Wand Lighters: These wand-style lighters are typically sold for use with BBQs and fire pits.  Me?  I use then to light my gas stove and gas fireplace when the power goes out.  I like that they are refillable.

The New 2000-Hour Flashlight:  With a few simple tools and a lantern-type flashlight, you can easily build a flashlight that will give off useable light for 2000 hours.

Zippo 6 Value Pack of Wicks and Flints: Like the components of Coleman Lanterns, the bits and pieces of a Zippo lighter are replaceable.  If you have a premium Zippo lighter, be sure to stock up on wicks and flints.

A Guide to Building the Perfect Bug Out Bag

Surviving Flooding During and After Hurricane Florence