How much do your really know about matches?  Chances are you know more about a magnesium fire starter or BIC lighter than you do about matches.  It is just that they are so ubiquitous.  Everyone knows about wooden kitchen matches, right?  And heck, back in the day folks used to collect books of matches from fancy dining establishments and keep them displayed in decorative jars.

I know I am dating myself with that last statement but seriously, how much to you really know about matches?  One thing for sure is that I can not purchase strike anywhere matches locally.  Our grocery store refuses to stock them for fear that they will spontaneously combust.  That is a true statement; they actually told me that. 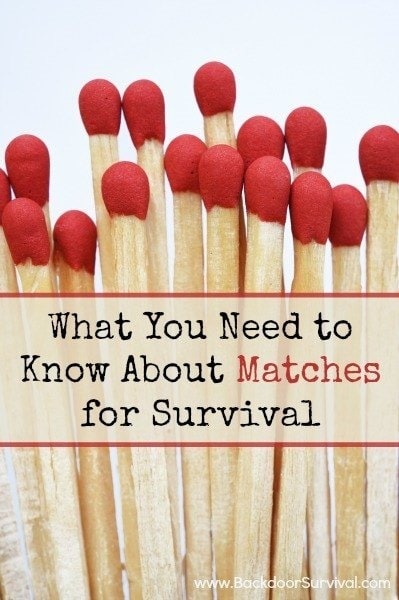 But is it true?  With some help from my friend, Ron Brown, today I am going to delve into the world of matches and provide you with what you need to know about matches for survival.

More than you ever wanted to know about match chemistry . . .

The very tip of a strike anywhere match contains potassium chlorate plus phosphorus sesquisulfide (a.k.a. tetraphosphorus trisulfide, trisulfurated phosphorus, and phosphorus sulfide). It’s is a primary explosive, sensitive to friction, impact, and heat.

If you cut off the tiny white tip of a strike anywhere match, place it on an anvil, and rap it with a hammer, it will sound like a .22 rimfire rifle cartridge (almost).

It was once a test of manhood for teenage boys to light their cigarettes from strike anywhere matches . . . matches that they lit one-handed, using their thumbnail as the striker. If a chunk of burning match head got lodged under one’s thumbnail, of course, it could ruin an otherwise pleasant afternoon. Trust me on this.

Safety matches (strike-on-box) contain potassium chlorate plus sulfur in the match head and red phosphorus in the gritty striking surface printed on the matchbook or matchbox.

The act of striking produces friction and heat. The heat converts a tiny amount of red phosphorous into white phosphorous vapor which ignites spontaneously. This heat decomposes the potassium chlorate, liberating oxygen, and causes the sulfur to burn. This in turn ignites the wood or paper body of the match. 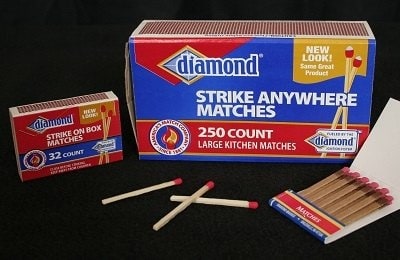 Where can I buy strike anywhere matches?

The only place I knew for sure was Canada. The Redbird brand, manufactured by the Eddy Match Co., was (and still is) sold by No Frills (a large grocery chain) and Canadian Tire (in the camping section). 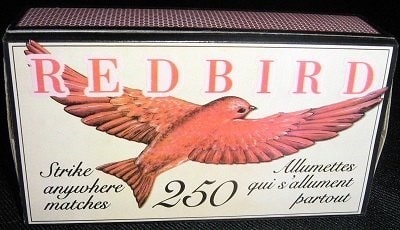 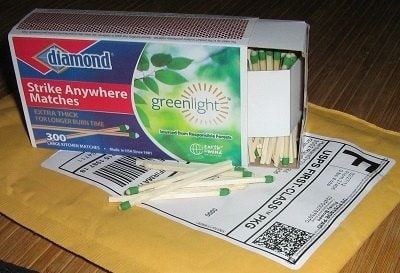 I still haven’t seen them face-to-face in the big-box stores (e.g. Walmart, Target) so I was slightly amazed to find them just the other day in my local Mom-and-Pop grocery store. One U.S. dollar per box of 300. Strike anywhere matches are once again appearing on store shelves.

While they were on hiatus, one story had it that strike anywhere matches were classified as HazMat (hazardous material) and incurred excessive transportation costs. Consumers were not willing to pay the higher price and, for that reason, retailers didn’t stock them. But, as far as I know, safety matches were also classified HazMat.

Another story had it that chemicals in the strike anywhere tip were used in homebrew crystal meth recipes. Wrong again. If anything, it was the red phosphorous in the striker panel that was of interest, nothing in the match head.

Above (L to R): Coghlan’s, Stansport, Coleman’s, and UCO Stormproof.

I decided to test some homegrown methods of waterproofing against commercial matches. The tests consisted of “waterproofing” ordinary strike anywhere matches (dipping in paraffin wax, painting with shellac, etc. . . . whatever recipes I could find), letting them dry 24 hours, then soaking them side-by-side with commercial waterproof matches in a bucket of water overnight.

I was astonished to find that the commercial waterproof matches didn’t work. The heads were all mushy and crumbled when striking. They might have been water resistant but none of them were waterproof. Ditto for the homegrown methods.

Nail polish came the closest of anything to working but the matches were no longer “strike anywhere.” Strike some places would be a better description. Matchbox, yes. Side of carborundum grinding wheel, yes. Sandpaper and rocks, maybe. 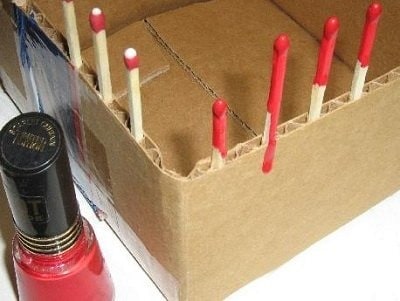 And the entire match had to be painted with nail polish. If only the head-end were coated, water penetrated the exposed wood, traveled the length of the stick, and turned the match head mushy.

Conclusion:  A mechanical container remains the only for-sure way I know to have a dry match when you need it. One buck. Cheap. 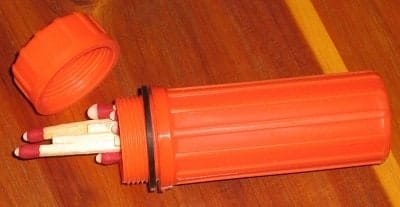 5 Tricks and Tips for Using Matches

Over the years, I have learned these tricks and tips for using matches.

1.  One trick to increase your supply of paper matches is to split them in half. Granted, lighting requires nimble fingers and some of the halves will fail. Nevertheless, splitting the matches will increase your effective match count by 75% or so. I recommend that you split just a few and experiment before you split everything. 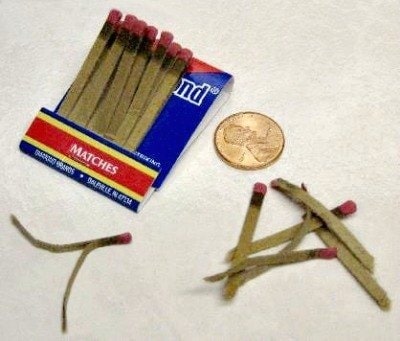 4.  Long-term storage. Humidity is the enemy. The FoodSaver of Rival Seal-a-Meal (brand) vacuum system is one way to solve the problem. Other solutions include fruit canning jars, Tupperware, and recycled plastic containers of all kinds (think coffee, pretzels, whey protein powder). Seal the lid with silicone calking.

5.  For a desiccant (to soak up humidity inside the container), you can use silica gel (found in the craft section of Walmart) or powdered non-dairy creamer in an envelope made from a coffee filter. How to form the seams of the envelope? Fold over the filter edges a couple of times and staple them. 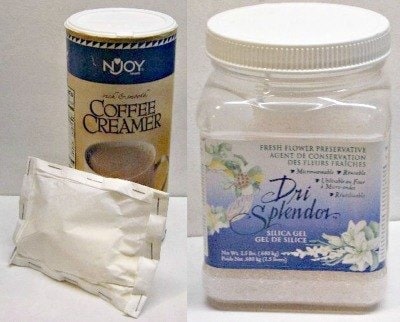 I have been working with Ron for a long time.  We first became acquainted when he introduced his Lanterns, Lamps & Candles CD (still available from his website).  Later, recognizing that books on CD were not as popular as eBooks, Ron converted all of his material to both print and eBook format.  This became his Non-Electric Lighting Series.

And the part about matches?  According to Ron, “Matches” was left on the cutting room floor along with “Lighters” (which I will be sharing with you down the road).

In a shameless pitch, if you enjoy Ron’s work, I suggest you pick up one of his books.  They are reasonably priced and make a useful addition to your survival library.  It does not hurt that they are highly readable and written with a good deal of wit and humor.

Although I tend to favor those butane wand devices that are used to light barbeques, I know that when the fuel runs out, they are useless.  As a backup, I use BIC lighters, and as a backup to that I use matches.  Last on the list, but still a skill I practice, is using a fire steel.

Having the means to light a fire, weather for cooking, warmth, signaling or some other purpose, is basic to our preparedness efforts.  I would like to thank Ron for sharing his research and knowledge on matches.  Coming up next?  Lighters!

UST Marine Waterproof Match Case: I have tested these cases by first trying to drown them in salt water then later using the matches inside.  This case is truly waterproof.

Diamond Strike Anywhere Matches – 3 Pack:  These strike-anywhere matches are the #1 best seller.  Why they sell them and my local grocery does not is beyond me.

Diamond Strike on Box Matches:  Most likely you will find these a lot cheaper locally.  That said, for me it is far more convenient to order online.

Coghlans Waterproof Matches 10-pack: There are 10 boxes of 40 matches.  That is a good deal for 400 waterproof matches.

Ron Brown’s Non-Electric Lighting Series:  Here they are, with eBooks starting as low as 99 cents each.  All of these books are also available in print.

The New 2000-Hour Flashlight:  With a few simple tools and a lantern-type flashlight you can purchase, you can easily build a flashlight that will give off useable light for 2000 hours.

Preferred by Backdoor Survival.  This is the Emergency Food I buy for my own use. It is non-GMO and MSG-free plus there are 100% Gluten-Free options.  Shipping is always free.  CLICK HERE TO ORDER.

Surviving Flooding During and After Hurricane Florence

The Go Boot: Exploring Options For Easy To Get On Footwear For Emergencies

The Importance Of Cats For Prepping and SHTF: Here come the survival kitties!