Today I share the next author interview and giveaway in the current Backdoor Survival Spring 2014 Book Festival.  Kyle Pratt, the author of Through Many Fires: Strengthen What Remains, is joining us for an interview and is also providing ten lucky readers with a free copy of his book. 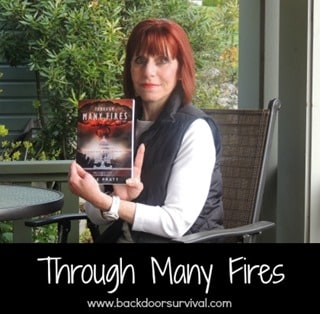 An Interview with Kyle Pratt

1. Tell me about your book, Through Many Fires. What is it about?

Through Many Fires, is a post-apocalyptic survival novel. The book was released in August of this year in both paperback and on Kindle and currently has 102 Amazon reviews with 90 being either four or five star.

In the book, terrorists smuggle a nuclear bomb into Washington D.C. and detonate it during the State of the Union Address. The protagonist, army veteran and congressional staffer Caden Westmore, is in nearby Bethesda and watches as a mushroom cloud grows over the capital. The next day, as he drives away from the still burning city, he learns that another city has been destroyed and then another. Everyone is realizing that America is under siege. Panic ensues and society starts to unravel. The book follows Caden as he struggles to reach his family in Washington state.

There is now an audiobook version of Through Many Fires and the novel will soon be available on Barnes & Noble, Nook, and iTunes.

2. What type of research did you have to do while writing Through Many Fires?

I spent 20 years in the navy and my youngest son served in the Army so, we had the military culture, lingo and equipment pretty well covered. I did read several eyewitness accounts of nuclear explosions for that part of the book. I don’t dwell on technical details like some survival novels do, but if I mention a radio, gun or some piece of equipment the details were either known to me or my son personally or I researched it to ensure it was correct.

I added a glossary to the back of the book so those unfamiliar with weapons and military terms would have easy access to the information.

Well over a year, but I can’t say exactly how long it took because I don’t remember precisely when I started.

4. Every book, fiction and non-fiction, includes a message. What message do you hope my readers will take with them after reading Through Many Fires?

I’m interested in the post-apocalyptic survival genre because I am a prepper. In the book many people go hungry or die, but the people who are prepared (at least to some extent) and are proactive do the best.

5. Can you tell us a little bit more about yourself?

I grew up in the mountains of Colorado before the Internet and out of the range of television and most radio stations. Before moving there I had never read a book, but one day during junior high in a moment of desperation I picked up a science fiction novel by Robert Heinlein. Before I graduated from high school I had read every novel Heinlein had written at that time and many other books by Isaac Asimov, Arthur C. Clarke and others.

Since that first day I have been a constant reader of both fiction and non-fiction. I developed a keen interest in apocalyptic fiction and have read all the classics in the genre including, Alas Babylon, Earth Abides, On the Beach, I Am Legend and Lucifer’s Hammer.

I earned an Associate in Arts degree from Mesa State College in Grand Junction. When money for college ran low I joined the United States Navy as a Cryptologic Technician. I thought I would do four years and then go back to college. Sometimes life doesn’t work out the way we plan.

My first assignment was with a U.S. Navy unit at the Royal Air Force base in Edzell, Scotland. While on leave in Israel I met Lorraine Best from Plymouth, Devon, England and married her in her hometown the next year. Our first son was born while we were living in Scotland. Together we spent the remainder of my twenty year naval career traveling around the world to Guam, Japan, Hawaii and other places.

Even before I retired from the service I was writing short stories. I released my debut novel, Titan Encounter, in July of 2012. My second book, Final Duty – The Speculative Fiction Anthology, was released in January of 2013. Both have been on Amazon bestseller lists.

Today, during the school year, I live and work in the Yup’ik Eskimo village of Eek, Alaska and during the rest of the year I live on a small farm in Western Washington State. Yes, it’s a really long commute.

6. As an author in the survival, prepping and/or homesteading niche, what are you personally preparing for?

I am a prepper, but unlike some preppers I’m not preparing for a particular event. I don’t know the future, but what I do know is that bad things happen. Preparedness and taking care of your family is both a Biblical principle and common sense.

I seek to have multiple means of providing necessities for my family. We store food and have a garden, orchard and greenhouse. We have a well with an electric pump, but we also have a hand pump, just like you see in the old west movies. Everyone should have candles and flashlights, but I’ve taken it a step further with an electric generator that can be plugged directly to the house electrical system.

These and other measures have been done over a period of years as time and resources allowed.

7. Do you have plans for another book?

Yes, I’m currently writing a sequel to Through Many Fires titled A Time to Endure. That novel will be released later this year, but I don’t yet have a release date. I’m planning a three or four book series. I don’t know what I’ll write after that, but I will be writing.

I wrote Through Many Fires because of my interest in preparedness and the post-apocalyptic genre. Partly because of that, I wanted to keep it realistic. There are no zombies, vampires or aliens; the enemy is very human and quite possible. I believe it is just the kind of book that someone involved in survival and preparedness would find a thought-provoking read.

Ten copies of Through Many Fires: Strengthen What Remains have been reserved for lucky readers.  Not only that, the winners will have their choice of a paperback, eBook, or audiobook (you know how I love audiobooks!)

Here is the giveaway question:

What event or series events spurred you to begin prepping or to begin showing an interest in family preparedness?

For this weeks giveaway, you need to answer this question by sending an email that includes your response. The deadline is 6:00 PM Pacific next Wednesday with the winner notified by email and announced in the Sunday Survival Buzz.  You will have 48 hours to claim the winning book.

Note:  Here is the deal.  I will be making some changes to my hosting servers starting this weekend.  Rather than lose your entry comments during the migration process, I will be accepting entries by email this one time only.  Thank you in advance for your patience during this important transition.

I have read (actually part read and part listened to) Through Many Fires.  The first part sets the scenario where a apocalyptic disaster has occurred and the country is in chaos.  There is a lot of discussion of basic prepping and survival techniques at the beginning of the book.

Things really start to get interesting later on, when the new PTB takes over and the ethics and motivations of the country’s new leadership gives you pause for concern.  This is page turner you will not want to put down!

I hope you will enter the giveaway to win your own copy of this fabulous new book.  Remember, there are ten copies waiting to be claimed!

New:  Click Here To Vote For Me at Top Prepper Websites!

If you have not done so already, please be sure to like Facebook which is updated every time there is an awesome new article, news byte, or link to a free survival, prepping or homesteading book on Amazon.  You can also follow Backdoor Survival on Twitter, Pinterest, and Google+ and purchase my book, The Prepper’s Guide to Food Storage from Amazon.

Spotlight Item:  Through Many Fires: Strengthen What Remains

Terrorists smuggle a nuclear bomb into Washington D.C. and detonate it during the State of the Union Address. Army veteran and congressional staffer Caden Westmore is in nearby Bethesda and watches as a mushroom cloud grows over the capital. The next day, as he drives away from the still burning city, he learns that another city has been destroyed and then another. America is under siege. Panic ensues and society starts to unravel. 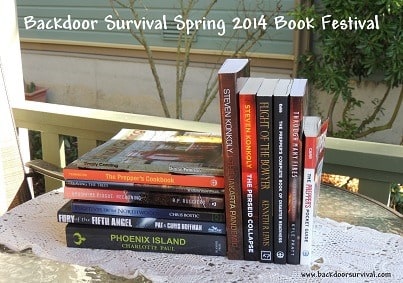 And if not, at the very least pick up the free Kindle app so that you can read Kindle books on your PC or favorite electronic device.

Spring 2014 Book Festival #5 – Fiction
Brushfire Plague: Reckoning
Through Many Fires: Strengthen What Remains
Flight of the Bowyer
The Jakarta Pandemic
The Perseid Collapse
Leaving The Trees
Fury of the Fifth Angel
Fugitives from Northwoods
Phoenix Island: A Tale of Disaster, Survival, and Rebirth

Spring 2014 Book Festival #5 – Non-Fiction
The Prepper’s Complete Book of Disaster Readiness: Life-Saving Skills, Supplies, Tactics and Plans
Simply Canning: Survival Guide to Safe Home Canning
The Prepper’s Pocket Guide: 101 Easy Things You Can Do to Ready Your Home for a Disaster
The Prepper’s Cookbook: 365 Recipes to Turn Your Emergency Food into Nutritious, Delicious, Life-Saving Meals
Jake and Miller’s Big Adventure: A Prepper’s Book for Kids
The Pantry Primer: How to Build a One Year Food Supply in Three Months as well.  For the best deal, purchase a dozen at a time to get a discounted price.  Be sure to also check out the Clear Globe attachment.

No list of books would be complete without my own e-book, The Prepper’s Guide to Food Storage.