Matt and I did not have cats until we moved out to the country on our 11 acres and realized that something had to be done to take on the rodent problem.

Fact: If you move to a place that is overgrown or near the woods, rodents will try to find a way to be part of your life. It happens to everyone. Living close to fields and forests means you have the perfect corridor for them to travel to you.

How to help out your cats

Here are some things you can do to reduce the temptation for rodents to take up residence at your property.

Picking out a great cat or two

Consider finding someone that has an unwanted litter nearby.

Matt and I know someone that used to raise Bengal and Sphynx cats. Sometimes she had some kittens that didn’t carry the hairless gene or in the case of our fabulous current kitties, Ginny and Scout, their mother Gretchen, a full-blooded Bangel, had a rendezvous with a big solid black barn cat.

When the rain and snow start they still like to sleep on the couch together but not as close as they did as kittens! 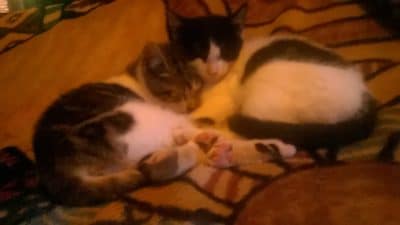 Bengals are excellent mousers. In fact, our friend had to put Gretchen up because people in their suburban neighborhood were mad because she was killing all the squirrels. According to our friend, Gretchen was averaging one squirrel per day. 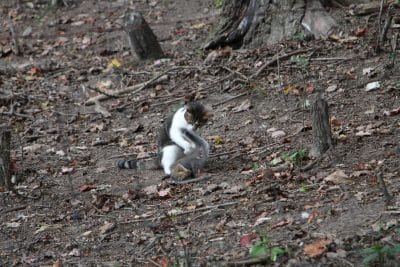 Scout out in the woods squirreling, Fall 2018.

While that may not be ok in some suburbs, out here in the country, it is excellent to have a cat that likes to hunt that much! Well, at least one does. Ginny has decided to be a house cat since we don’t really have a rodent problem on our property like we did when it was overgrown.

Scout takes after her mother and often brings in a squirrel. We have way too many of them, in fact, because it has been such a hard year for animals due to lack of mast in the forest, we have squirrels damaging our shiitake mushrooms for the first time. 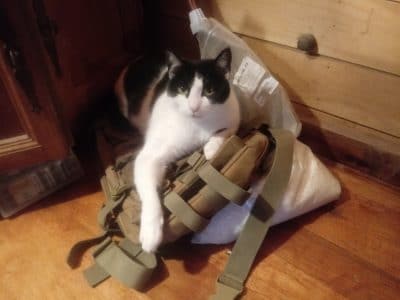 Ginny sleeps in the bed a lot of nights. She used to get kicked out for purring too loud, but she has it under control. She is an odd cat because she really likes her belly being rubbed. At night she falls asleep with my hand between her front legs, over her heart.

I have a hard time sleeping (see article on PTSD for more details), and she helps.

Despite all that sweetness, she acts weird outside the house if Matt or I want to pet her. She is two Ginnys, indoor Ginny, and barn cat Ginny.

There are some shelters and nonprofits that have programs where people in the community can bring in feral or community cats for spaying and neutering, shots, etc. and then they can be released back into the community or adopted out as a barn cat to a farm. This is a way for shelters to find jobs and homes for cats that are not suitable for house pets. It helps keep rodents and vermin down and means that fewer cats are put down.

This is a great service for farms that need a lot of cats. Also, I really love how these cats get some basic care and are spayed or neutered so that the population doesn’t get too out of hand. It really saves a lot of suffering due to too many unwanted kittens.

Adopting an adult cat can be nice, but there is something to be said for getting kittens if you are new to cats and want them to be very attached to you and your home.

My Dad needed a few cats at his house since his cat has grown very old and doesn’t really hunt anymore. 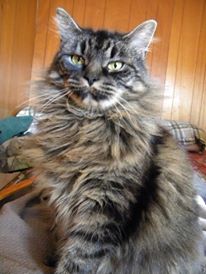 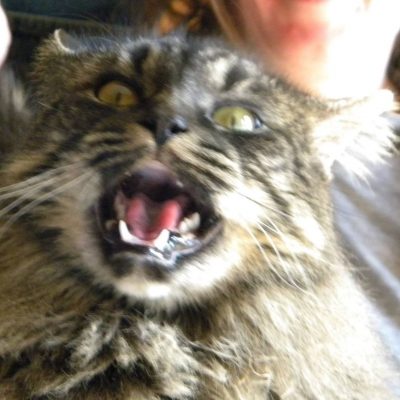 This is my Dad’s old cat. She is a Norwegian Forest Cat. He named her Keisha, but we refer to her as Keisha the Terrible because she likes to swat and is very huge and grumpy!

We went to get a single cat, but due to a very fruitful kitten season, the shelter was overrun with cats! There were several cell blocks of kitties. One particular cell was contained a very outgoing male kitten named “Star.” He kept reaching his paw out to batt at Matt. He really wanted to go home with us. Well, he had a cellmate, a solid black female kitten close to the same age. We brought them both home because at $11 a kitty why not? 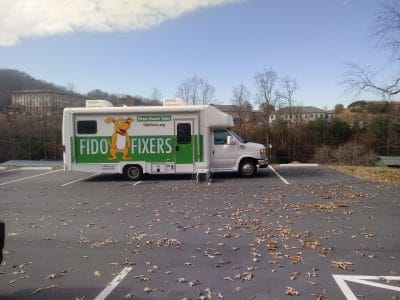 Where I live, there is a mobile spay-neuter clinic that comes to the shelters. It is painted with a very excited looking dog with bandaids where he has been “fixed.”

This brings us to an important point about cats.

Getting two kittens that get along is less nerve-wracking than getting a single kitten. With two, they can keep each other company.

Cats can be a great companion for those that are largely housebound.

It has been really good for my Dad to have these kittens. It can be hard for me to get him to exercise as much as possible. The cats make him get up and move around more, especially Jules. The kitten that was named Starr looked and acted so much like that crazy lemur King Julian from the Penguins of Madagascar cartoon. He decided that riding on my Dad’s walker as he went around his house doing things, is the best thing ever. The big plus is that it makes my dad walk around the house more because he is “walking his cat”. 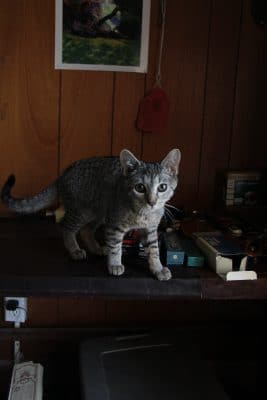 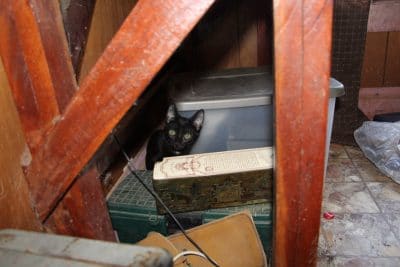 Poisons are awful and dangerous.

Matt and I got desperate when we were living in the camper and had just a small outbuilding. We put some poison out, and the mice took it alright, but they stashed it in our rabbit pellets! We were lucky that Matt noticed it before feeding any tainted food. We immediately threw away all the poison we could find. We searched well and thought it was all gone….then Ruby Pearl, our Great Pyrenees who was just a little puppy at the time, somehow found some under the building where the mice had buried it. We had no idea that was what had happened until several scary bleeding incidents. Rat poison causes hemorrhages and makes blood, not clot. A big dose of Vitamin K, and some Vitamin K pills brought her out of it, and she is still going strong today. I was young and stupid and thought when she first started showing mild symptoms that her teeth were just giving her trouble and then things got worse.

So don’t put out poison because it can stick around for years even after you think you have it all cleaned up.

Nature is full of niches. It is up to you how to handle that

If you don’t have enough rodent predators, then you will have then trying to get whatever they can from you. Cats are a great way to have a sweet pet and take care of the issue. Eventually, it will get to the point where your cats have it under control, and just them patrolling sometimes will be enough to make rodents think twice before spending any time around your place.

Some of you may have read my post on having to clean up some big messes on our place where people had dumped; It is important that you do this too over time. It can be a huge job but getting started is a big deal, and over time you can reduce the habitat for rodents

What to feed cats

There are hundreds of cat food formulas out there. The brands we prefer to feed our cats are Purina products or Diamond Naturals. Both brands are affordable and have not been subject to any recalls that I know of.

While it may be tempting to buy ration style or less expensive cat food, I can tell you that you usually don’t save much overall and your cat has a worse diet. Cats don’t do as well on a diet that is very heavy with corn and soy. They tend to eat a higher quantity of less expensive corn heavy cat food than if you feed them something predominately quality meat based. 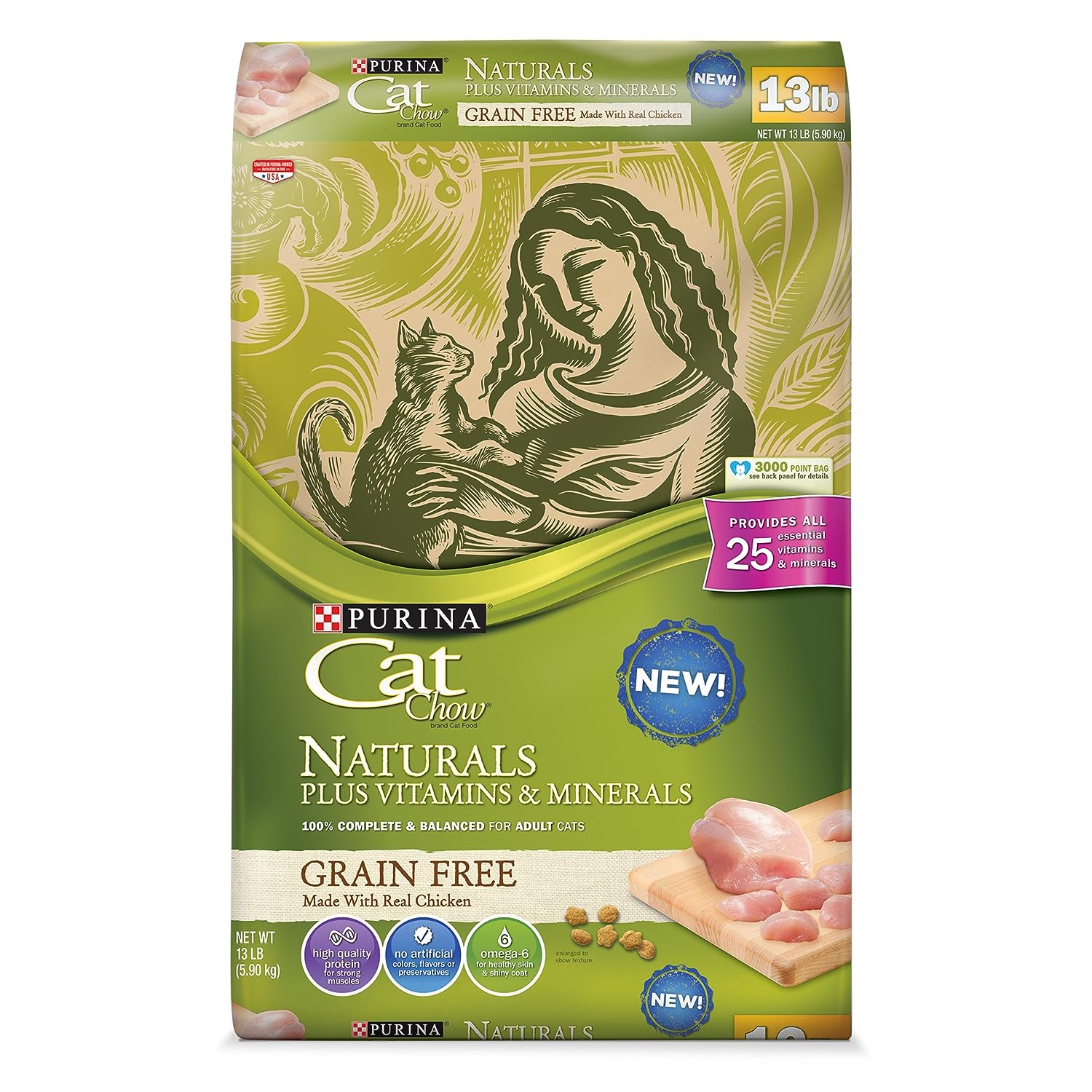 Diet cat food may be needed at some point

Since Ginny decided to be a house cat most of the time, she started to have weight gain. This can be a problem in spayed cats. We were forced to start feeding her a weight management cat food. Purina One Healthy Metabolism seems to have stopped the weight gain. On the other hand, her sister, Scout gets some extra meat because she is a lot more active. We have two very different cats regardless of them being in the same litter. 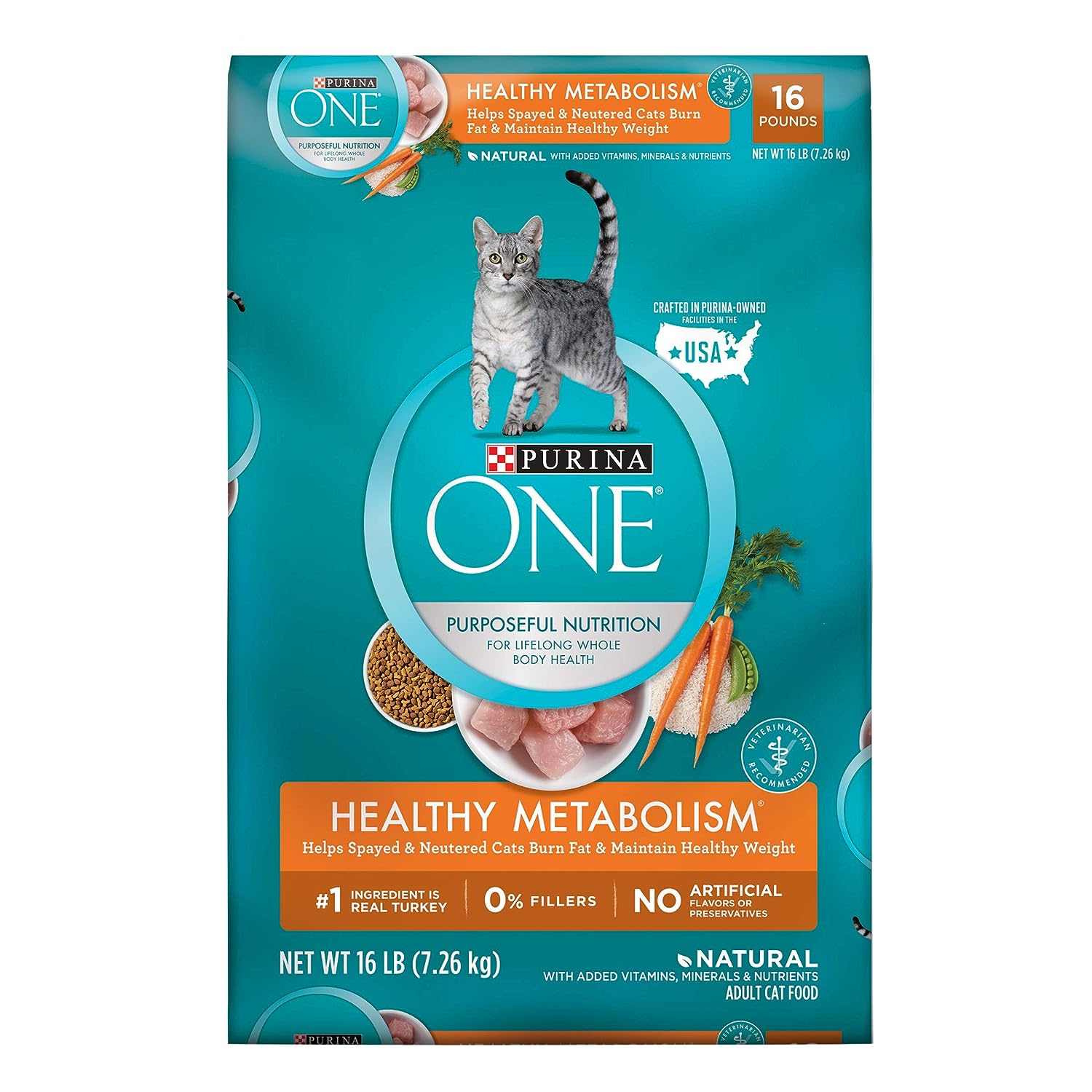 Cats that have food in front of them all the time may not hunt as well as those that are fed at regular times and measured amounts. I am not suggesting you don’t feed your cat sometimes but do be careful how much you let them have. It may take a little time to figure out what works best at your house and for your cats!

Transition your cats slowly if you are making a big move

All too many people release their cats at their new place too soon. If you are moving to a totally different property or house, take steps to gradually introduce your cat. It may take a few weeks before they get their full freedom, but that is better than them running off. There have been cases of cats finding their way back to their old home only to find new people there.

Remember to put back some food and wormer for them in your preps.

Cat food can be put in sealed plastic containers like a small barrel. Diatomaceous Earth added to the food can prevent bugs and help keep your cats wormed during an SHTF scenario. It is not a bad idea to include a few moisture absorbers too just to prevent spoilage. If you want to take the time you could vacuum seal some cat food with moisture absorbers and put that back in totes.

Remember that cats that are now allowed to get really overweight really don’t eat that much. Four bags of cat food at 13-16 lbs each can get you through for quite a while. 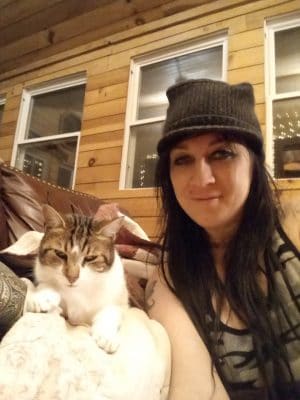 Samantha Biggers can be reached at samantha@backdoorsurvival.com.

Define the Prepper Movement With A Call Action

The Adhesives and Glues Every Prepper Needs

7 Responses to “The Importance Of Cats For Prepping and SHTF: Here come the survival kitties!”