In terms of innovation, I assumed that camping lanterns had already reached their peak. Some lanterns might have better features, burn brighter, use batteries instead of gas, weigh less, or be more durable, but they’d all essentially be different versions of the same product.

Packlite Max: Out of the Box

Or so I thought. Originally designed for use in disaster zones, the LuminAID PackLite Max doesn’t look or feel like any lantern you’ve ever seen. That’s because it has a genuinely pioneering design, proving that even with camping lanterns, you can still invent a better wheel.

When you first take it out of the box, the PackLite Max isn’t recognizable as a lantern in any conventional way. It’s a pair of 5 ¾” x 5 ¾” square panels sandwiching a layer of non-PVC rubber that, while compressed, gives the lantern a total thickness of a little under an inch. The top layer consists of a solar panel, USB charging port, and some lights and buttons, and the back panel has an air valve similar to what you’d find on a yoga ball or inflatable pool toy. There’s also an orange rubber strap keeping everything tucked compactly together. Unbuckle the strap, and the rubber in the middle unfurls into an inflatable housing that connects the top and bottom panels. 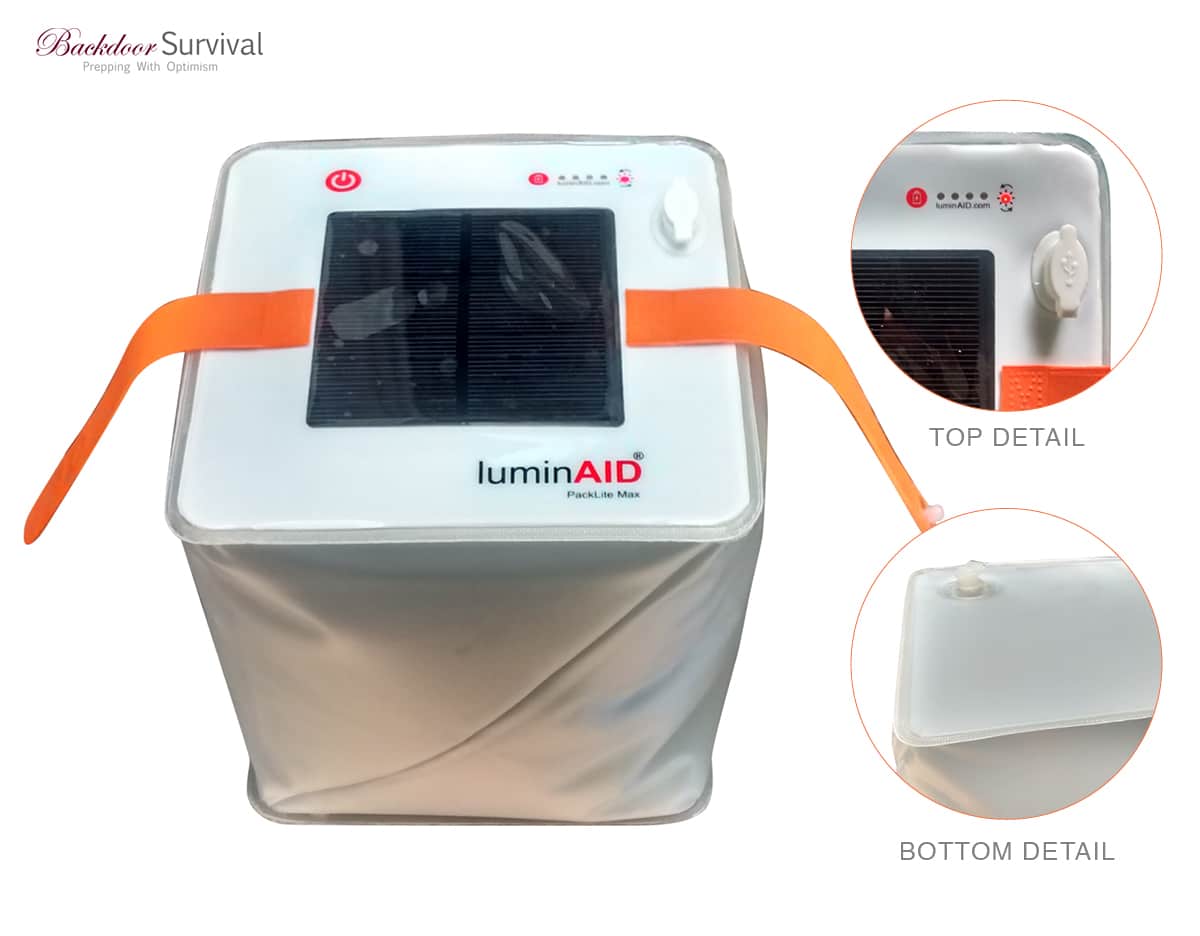 Inflate the housing by blowing into the valve on the back, and the lantern turns into a translucent cube six inches tall. And even though it’s ready to use at this point, it still looks nothing like a lantern.

Here’s how it works: The solar panel on top uses sunlight to charge an ultra-thin battery. You can also charge it in any USB-based power source. A battery indicator button tells you approximately how much juice you have left. Press the power button, and an array of LED lights hidden on the inside of the top panel illuminate the translucent cube. Suddenly, you have a futuristic-looking 150-lumen lantern that you can carry, hang, or even float.

The PackLite Max’s extremely unique design comes with some huge advantages over conventional lanterns. First off, it’s ultra-light. At only 6.8 ounces in product category where a normal range is anywhere from eight ounces to over a pound, it lets you easily shave some extra weight. In a severe disaster or even just a backpacking trip where ounces count, that makes a big difference. 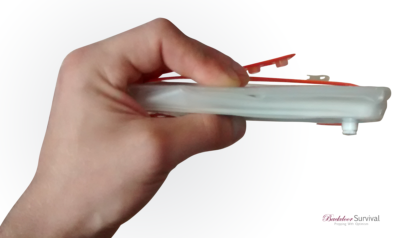 In addition to being lightweight, LuminAID’s design also makes the PackLite Max incredibly compact. Lanterns tend to be somewhat bulky due to the need for batteries and other components, but by ingeniously finding a way to make theirs inflatable, LuminAID has created a lantern that can fit where no other lantern possibly could. It could easily slide into a small bug-out bag, a car’s glove box, or even that seat-back sleeve where everyone used to keep their road maps before they started relying on GPS.

The PackLite’s translucent rubber housing diffuses light quite well. It creates a softer glow that’s more pleasant and less blinding than other LED lanterns. As for water resistance, rain is no problem – as long as the valve and USB port are closed securely, it both floats on top of water and is waterproof up to a meter. After some aggressive testing in the yard blasting it with my garden hose, the lantern held up well to water and abuse.

The entire lantern is also recyclable, so when it finally dies, you can dispose of it anywhere that recycles cell phones. This unique detail makes it an eco-friendly product for its entire life cycle.

If used carelessly around other tools, I could see the inflatable rubber housing being pierced by a knife, ember, or sharp stick, but the rubber material feels thick and well-built. A larger concern is wear and tear on the valve. For a piece of equipment that will be subject to rough conditions, it feels as though this piece will be the first wear down and, at some point, I’ll no longer be able to inflate the lantern.

I imagine the lifespan of most PackLites depends on how quickly the valve deteriorates. As with other inflatables, the valve can be pushed in so that it’s flush with the rest of the surface, but mine pops back out quite easily. With more use I’ll see just how durable the PackLite Max is, but hopefully the valve lasts the test of time.

I also found the valve slightly difficult to pinch between my teeth as I inflated the lantern, but not so much that it was a struggle. For their part, LuminAID says this is normal, and the valve becomes less stiff once the lantern has had more use.

The only other drawback is that, while 150 lumens is still great for most uses, the PackLite Max doesn’t get as bright as bigger, heavier lanterns will. The ultra-compact design and use of solar energy puts practical limits how much light it can put out. But what it lacks in lumens it makes up for in its low weight and small size.

There’s probably an overall durability trade-off over the long run when compared with heavier lanterns, but to me, it’s well worth it. Beyond that, and limits on the maximum brightness, there don’t seem to be major disadvantages to the inflatable design.

Despite not being capable of more than 150 lumens, the solar charging capability has obvious advantages. I’ve often thought about how great a lantern with a solar panel would be, but always assumed there was no practical way to incorporate a solar panel onto a lantern without making it enormous. LuminAID’s inflatable design has taken that assumption and crushed it into oblivion.

If attached to the outside of a pack, the sun will charge it while you hike. Leave the lantern out in full sun at your campsite, and it will be charged by evening. It’s truly turn-key, allowing you to have light without worrying about batteries, gas, or other power sources running out. 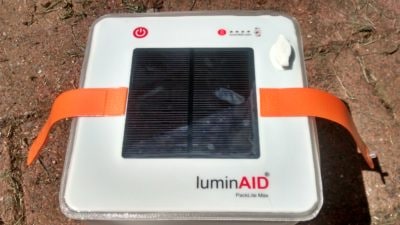 Of course, solar isn’t foolproof. While the technology has improved dramatically in recent years, cloudiness and shadows have a drastic effect on how efficiently solar panels can capture solar energy. That being said, I was surprised at how well the PackLite Max seemed to work, even in overcast conditions. While there was no way to tell the wattage input at any given time, a small “solar indicator” light indicates when the solar panel has detected a light source.

As LuminAID states, however, this doesn’t necessarily mean it is receiving enough energy to charge the battery. It only means that the panel is detecting some level of sunlight. You can even point the panel toward certain lights indoors, and the solar indicator will illuminate.

Still, I was able to get it from ¾ charge to a full charge, in mostly cloudy skies, in a few hours. Other testing showed results that were consistent with LuminAid’s claim that full sun will completely charge the lantern in 12-14 hours. If you have a way to charge it via USB port, it takes much less time –  close to two hours. 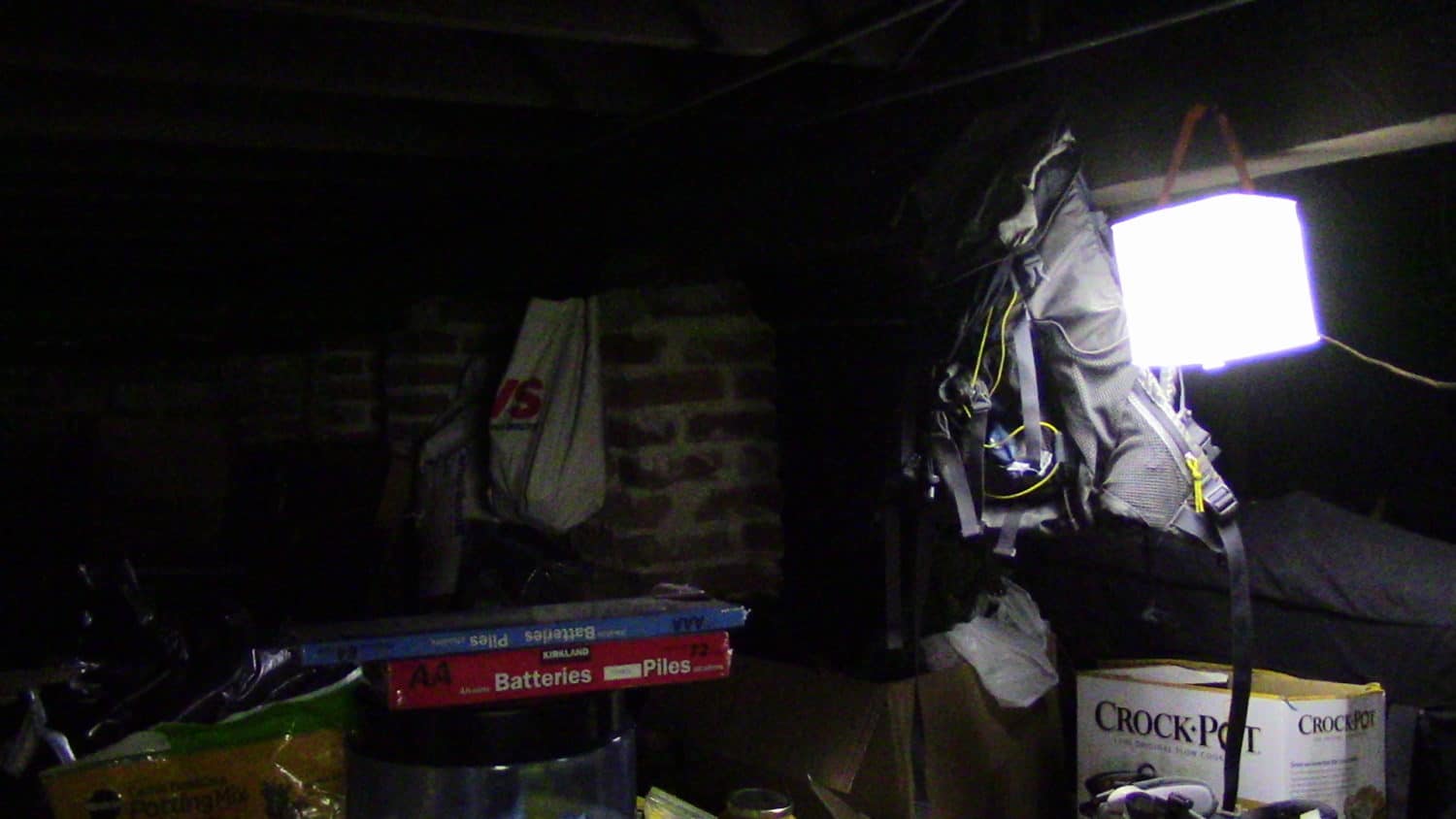 On the low mode, perfect for illuminating a tent, I confirmed LuminAid’s claim that the lantern stays lit for close to 50 hours. The 150-lumen “Turbo” mode only lasts for about four hours, but the “High” and “Medium” settings last for 6-8 and about 18 hours, respectively – plenty of time to shine extra light in a campsite from sundown until bedtime.

According to LuminAid, the PackLite Max lasts for 10,000 hours or more of use. I didn’t have 10,000 hours to test it, but at about retail, it’s already more affordable than many battery-powered LED camping lanterns.

Final Word – is the PackLite Max Worth it?

While not as bright as my other battery-powered lantern, the PackLite Max pulls its weight – and then some. Between its use of solar power and the reduction in the weight and volume it takes up in my pack, it’s my new primary lantern for camping and backpacking trips.

Whether you need a renewable light source for bug-out bags, roadside emergencies, power outage and disaster readiness, or just enjoying the great outdoors, the PackLite Max is a prepper’s dream come true.

Interested in Buying? You can pick one up here at our special offer page.

Eric is a nature-loving writer, experience junkie, and former Boy Scout who never forgot the Scout Motto: Be prepared. Aside from camping and survival, he loves writing about travel, history, and anything he finds strange and unique!

10 Reasons to Add Glow Sticks to Your Survival Kit

Exploring The Bowie Knife: 12 Examples Of The World’s Most Famous Knife