I have a habit of suggesting this piece of gear or that, especially when it is value priced. This is not to say that a bargain priced piece of equipment is going to perform the same as something more expensive but that sometimes, for the task at hand, inexpensive or even cheap will do just fine.

Over the years I have suggested bargain-priced deals on whistles, knives, fire-starters, and flashlights. That being said, my primary bug-out-bag and survival kit includes higher quality items that I know will stand up to the rigors of a SHTF world – if it ever gets to that, of course. 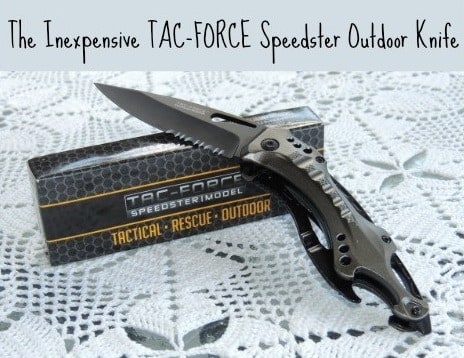 Today I would like to share some thoughts on one of those items that I consider an inexpensive favorite: the Tac-Force Speedster Outdoor Knife. I have recruited Shelly, known around here as the Survival Husband, to help out since he is never without a knife on his person.

Review of the Tac-Force TF-705 Tactical, Rescue and Outdoor Knife

Before I start, let me first say I love my Kershaw “Oh So Sweet” knife. It goes everywhere with me 24/7 and the only time it is not on my person is when I am on an airplane of sleeping. When Gaye asked me to evaluate the Tac-Force Speedster, I felt it would be no contest.

Here are the basic features along with my observations.

The knife has an anodized stainless steel blade that is approximately 3.5 inches long. A nice feature is that the back half of the blade is serrated. It is a little heavier than the Kershaw plus it is a bit larger and bulkier.

The knife has an industrial look that is not surprising since it is marketed as a tactical knife. On the other hand, while the one we have is black, it can be purchased in various colors, everything from red, to green to pink, to cammo. There is nothing industrial about the color pink!

I found the variable open notch in upper back of blade handy for all sorts of things and most particularly removing nails. On the negative side, I found the belt clip to be a bit large and the knife itself a little too bulky and heavy to carry around in a pants pocket. (I always carry my “oh so sweet” in my pants pocket – always.)

The blade is extremely sharp out of the box, and the serrated part of blade is much more usable than most other knives with a similar serrated edge. This would be very useful if I ever needed to cut myself or someone else out of their seat belt following a moving vehicle accident.

The Tac-Force has a flip, swing-out blade similar to the”oh so sweet”. You can manually release the blade lock to open the blade to bypass the flip function. The flip function is a little bit more difficult than the Kershaw but may loosen after a bit of use.

I am very impressed with this knife – so much so I’m having Gaye order one for each of our cars, each of our secondary bug-out bags, and one for her purse, maybe in pink.

One last thing: the Tac-Force Speedster is advertised as a tactical style knife and I would agree. I personally consider the Kershaw OSO Sweet to be more utilitarian, but then again, it is more than double the price although still an excellent value.

Not to disagree, but I find the blade on the Tac-Force much easier to open and close than the Kershaw. Perhaps it is just me but I get a bit intimated by the spring mechanism on the OSO Sweet. My guess, however, is that I do not use it enough to be comfortable with it. Also, Shelly is always around to do the heavy lifting so I rely on him to do most of the blade work.

I actually weighed the two knives and as a reference point, the Kershaw OSO Sweet weighed in at 3.2 ounces and the Tac-Force at 4.4 ounces. That is a significant difference and something to keep in mind if you plan to carry this knife in your pocket.

If you enjoyed this article, consider voting for me daily at Top Prepper Websites! In addition, SUBSCRIBE to email updates and receive a free, downloadable copy of my e-book The Emergency Food Buyer’s Guide.

Bargain Bin: Here are links to three of my favorite knives as well as some other bargain priced items.

Tac Force TF-705BK Tactical Assisted Opening Folding Knife 4.5-Inch Closed: Not only that, it is ranked as the #1 best seller at Amazon in both the camping and hunting knives categories. The reviews raved about this knife so I bought one, used it, and and can recommend it.

Kershaw OSO Sweet Knife: You can’t beat a Kershaw knife for quality at a reasonable price point. This knife will become your favorite for every day carry. And that includes the ladies, too.

Morakniv Craftline Q Allround Fixed Blade Utility Knife: FAVORITE! Also known as the Mora 511, this is now my favorite knife. It is made of Swedish steel and is super sharp. Many Backdoor Survival have emailed me indicating this is now their favorite knife too.

Striker Hand Tools Magnetic Hands-Free Task Light: I just ordered this so I can’t endorse it from first hand experience BUT the concept seems solid, the reviews are good. You know how I love a bargain!

Smith’s PP1 Pocket Pal Multifunction Sharpener: I wrote about this is in the article The Easy Way to Sharpen a Knife Without Spending a Lot of Money. It sharpens everything from pocket knives to kitchen blades.

The Prepper’s Guide to Food Storage will provide you with everything you need to create an affordable food storage plan, including what to buy and how to store it. Nothing scary and nothing overwhelming – you really can do this!

15 Uses For the SportsTek Survival Shovel

The Best Whittling Knives For Beginners and Beyond

The Best Hunting Bow for Survival: Traditional VS Compound