Unlike amateur radio, there is no license requirement to send Morse code.  With a bit of practice, anyone can send Morse Code and big brother will not stop you.  That being said, it would be extremely rude, impolite, and dangerous to send out irrelevant Morse Code, especially while in the midst of a disruptive event.

Why Morse code?  Morse code transmits text information as a series of on-off tones, lights, or clicks.  By interpreting these signals, a skilled listener (or observer in the case of lights), will understand the message without the need to have specialized equipment. 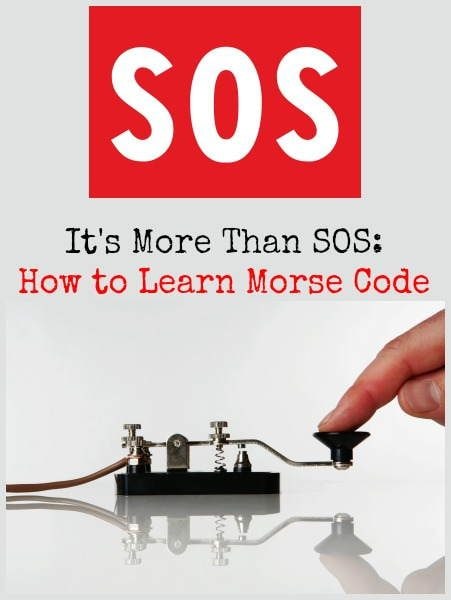 At the very least, everyone, and not just preppers, should know how to both recognize and transmit and the basic SOS distress signal: three dots, three dashes and three dots.

A few weeks back, my BFF and amateur radio expert, George Ure, provided us with some practical reasons to learn Morse code for survival and prepping purposes.  He is back today with a second installment, aptly titled “How to Learn Morse Code”.

How to Learn Morse Code

A few weeks back, we discussed some of the advantages of learning simple Morse Code. While not widely used today, Morse is still used in amateur (ham) radio, although it is not a license requirement.

The main uses from a prepping standpoint are being able to communicate via signals other than sound. Slowly pulsed lights, for example, have been used between naval vessels for more than a century.  The other reason is in event of physical incapacitation. Even a person with serious mobility and speech limitations can still be enabled to use Morse code to get messages out of their brain and to doctors and care-givers.

That is a subject of much debate and several schools of thought.

The conventional approach has been to attend a Morse class. Many amateur radio clubs around the country hold free training sessions. A visit to the American Radio Relay League can point you in the direction of a local club.

The conventional process involves attending a class one or two nights per week.  At the first class, things will begin slowly. You will see a code practice oscillator and a “key.”  An instructor will begin by training your ear to recognize a short “dot” (usually called a “dit”). This may be followed by a “learning to count” exercise. The instructor will send one dit, then two, then three, and so on.

With a few minutes of practice, anyone can learn at least a few Morse letters because a single dit (dot) is an ‘E’ while two dits (dots) are an ‘I’ and three makes an ‘S’. Four gives us the letter ‘H’ and five dits (dots) is the numeral 5.  You will probably learn only five, or so, dit (dot) combinations in the first part of a typical session.

A curiosity of the code: There is no regular (American Morse) combination of four dahs/dashes. This is because at low speed, dahs take a long time to send. Speed is everything and radio operators prize call signs that are very short.   With a few “dit” letters and “dah” letters, the instructor will then create some simple words. TOT, MEME, and so forth.

Not all instructors work this way. My first sessions with Morse were the letters A (dit-dah), C (dah-dit-dah-dit), M (dah-dah), E (dit) and T (dah).  Because I didn’t practice sending as well at receiving code, it took me a month, or so to learn it and then it was the breakneck speed of five words per minute.

For in-person classes, Gordon West has been an old hand in ham radio and offshore sailing circles for years and he has a series of products to consider. His Morse Code Teacher is a classic if classes aren’t conveniently available.

You don’t necessarily need to spend money to learn Morse, though. One website says you can learn Morse in one minute – check out www.learnmorsecode.com/. The idea here is to train yourself to follow a logical path to the correct letters.

The more “Do It Yourselfer” will find this WikiHow entry very good. But, as with any new skill, the more you practice the better you get. So don’t just start one or two days per week and expect to advance very quickly. 15-minutes a day is a much better pace.

Everyone’s brain has a “different learning speed.”  When I was learning to fly airplanes, I wanted to fly an hour a day. But my instructor talked me out of it.  “The idea,” he explained, “Is to build long-term memory. Sure, daily practice of several hours will build short-term memory, but depending on skill, there is a point of diminishing returns for everyone.”

Still, there is one major divide to think about: What do you want your ultimate code speed to be?

For some, especially preppers who are building the skill as a “back-up” learning in a slow-speed mode at 5 words per minute may be just the thing.

On the other hand, there are other methods of code-learning that begin at 12-15 words per minute.  More recently, the www.morsefusion.com site has been teaching 30 words per minute from Day One on. (Neither Gaye or I have any affiliation with this site.)

Every instructor will offer his or her personal favorite tips. Mine are really simple: Set an objective and train to that. If you don’t find a Morse code coin here you may be able to pick one up on eBay.

Learning Morse code isn’t particularly hard. Like any other brain-centered activity, it may be yet another way to keep neurons firing and thus hold back mental aging. Anyone over 40 may wish to read the summary of how “Cognitive training can reduce the rate of cognitive aging: a neuroimaging cohort study.”

We’re not claiming learning a new brain skill, like Morse code, can slow aging. But it probably won’t hurt.

There is another reason to learn the basics of Morse code.  In times of distress, the sight-impaired will need and want some way to both transmit and understand emergency communications.  Please do not dismiss this as irrelevant.  Two close friends, including George himself, have recently had problems with their eyes. causing temporary vision impairment.  And, as I write this, I am recovering from eye surgery myself.

Vision and sight problems are caused by many factors and are a subject for another time.  Still, it is important to be aware that if the SHTF, having the ability to communicate without being able to read may save your life.

SunJack Waterproof LightStick: Many emergency light sources have the ability to product an SOS signal.  This lightstick is one of my favorites. The versatile SunJack Lightstick is impressive for its compact form factor and extremely durable, waterproof casing.  In addition to providing portable lighting, it will charge 3 USB devices on a single charge. Learn more by reading: Gear Review: SunJack Waterproof LightStick 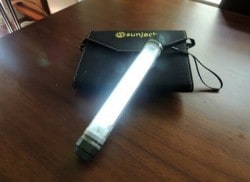 Deluxe Morse Code Practice Oscillator: This is a great tool for learning and then practicing your Morse code.  Runs on AC or a 9V battery.

ARRL Repeater Directory 2014/2015 Pocket Size: The best directory of frequencies for the 21,800+ repeaters around the country! Includes D-Star and APCO-25, references for operating practices, tips for handling interference, emergency message handling, guidelines for severe weather reporting to SKYWARN and the

The Best Tactical Pens For The Practical Prepper

15 Responses to “It’s More Than SOS: How to Learn Morse Code”