There’s something otherworldly and mysterious about the world of fungi, which is part of the reason taking the dive into wild mushroom hunting can be so intimidating. Even after becoming an avid plant forager myself, I held off from expanding into mycophagy, or wild mushroom foraging, assuming it to be more “advanced” than plant foraging, and more likely to result in mistakes.

Stories of toxic mushrooms, psychedelic delirium, and names like “Death Cap” and “Destroying Angel” made me feel like I was better off just sticking with wild plants.

How silly I was! The truth is, while there are mushrooms with toxic lookalikes that are hard to differentiate, the same basic foraging rules apply to mushrooms that apply to plants:

Other details, like not carrying different mushroom species in the same bag, are easily learned.

A careful, toe-in-the-water-first approach to mycophagy reveals that mushroom foraging is inherently no more dangerous than plant foraging. Now I feel silly for my participation in modern culture’s irrational fear of eating delicious, nutritious wild mushrooms.

Knowing just a few varieties massively expands your chances in a survival situation. But it also makes you less dependent on the industrial food system, which uses massive quantities of fuel and water to grow and transport nutritionally-inferior produce to supermarket shelves.

Mushrooms sprout suddenly and grow rapidly; many will be rotten or inedible just hours or days after you find them. The window for a successful harvest is open for only a tantalizingly brief time period. Meanwhile, you’re in competition with millions of hungry insects for your nibble of the delicious prize, making a successful mushroom forage even more rewarding.

Another very exciting aspect of mycophagy is the potential heft of your harvest – with many species, it’s common to net five, ten, or even twenty pounds of mushrooms. When you’re foraging plants, it’s nearly impossible to get that kind of weight in a single swoop.

To help you get started, below are my picks for the five easiest-to-identify edible mushroom species. In addition to being beginner-friendly, each species on my list comes in potentially enormous harvests of ten pounds or more!

See if you start to notice them in local yards, parks, and hiking trails in your area:

1. Chicken of the Woods (Laetiporus sulphureus) 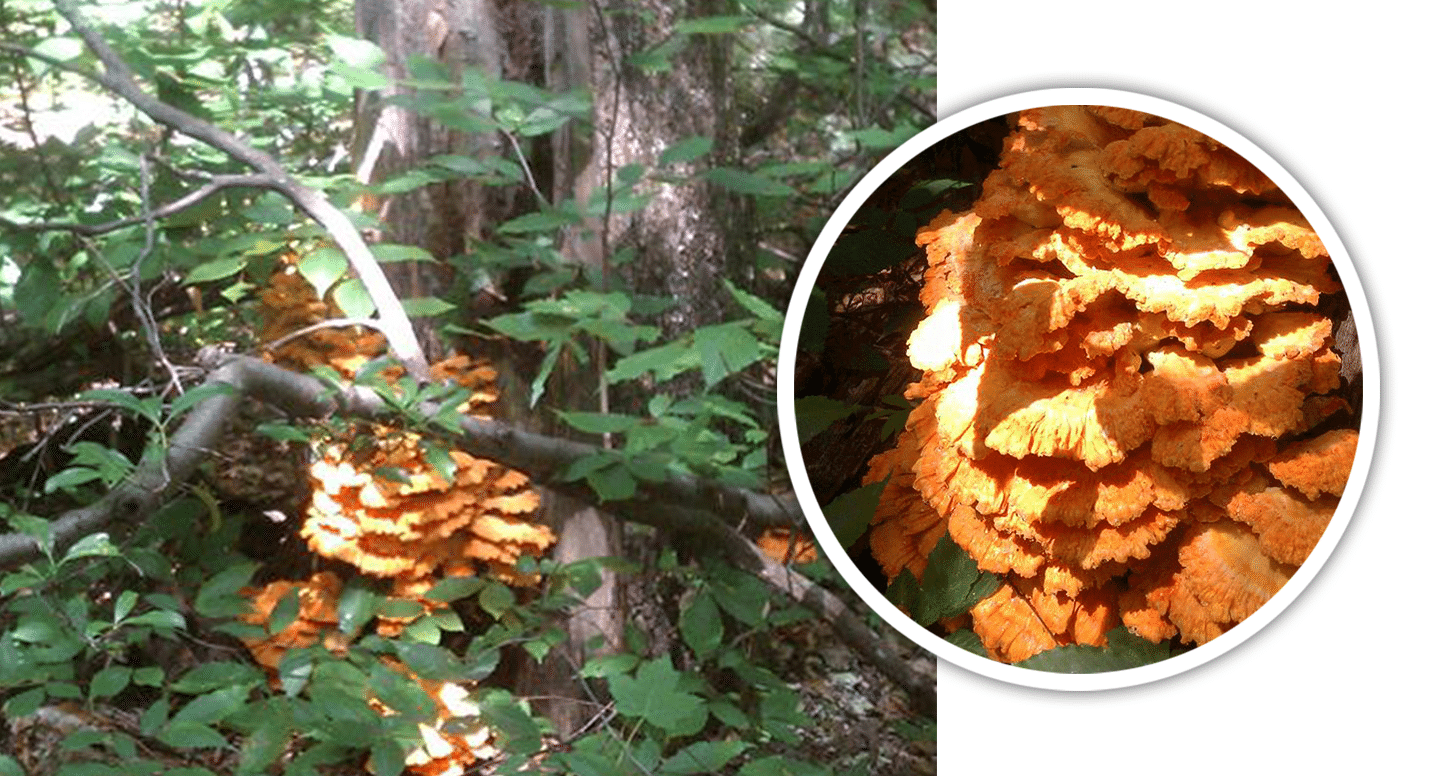 Also known as the sulphur shelf mushroom, “Chicken of the Woods” is named for its mild, versatile flavor (like chicken), and is easily identified by its dramatic yellow and orange shelves. From Brooklyn to India, nothing else on the trail quite sticks out like a bright, fire-colored Chicken of the Woods hanging off the side of a dead tree or stump.

Chicken of the Woods can fruit on a variety of trees, but most commonly grows on oaks. Autumn is its favorite season in most areas. Its surface is rubbery and flesh often juicy, but becomes woodier and more brittle as it ages. The shelves also become flatter, thinner, and less brightly-colored in older specimens.

The smooth, yellow undersides of each cap contain many tiny pores, or tubes, numbering about three pores per millimeter of surface area. Occasionally the Chicken mushroom can grow in rosettes instead of distinct shelves.

The younger it is when you harvest it, the more tender and delicious it will be. A similar and also-edible species has nearly identical characteristics, but is paler, with a white pore surface instead of the distinctive orange. Other than that, the only potential lookalike is really the Berkeley’s Polypore, which is also edible.

Many chicken mushroom hauls can have you walking away with ten or twenty pounds of mushrooms, while still leaving some behind for other critters. 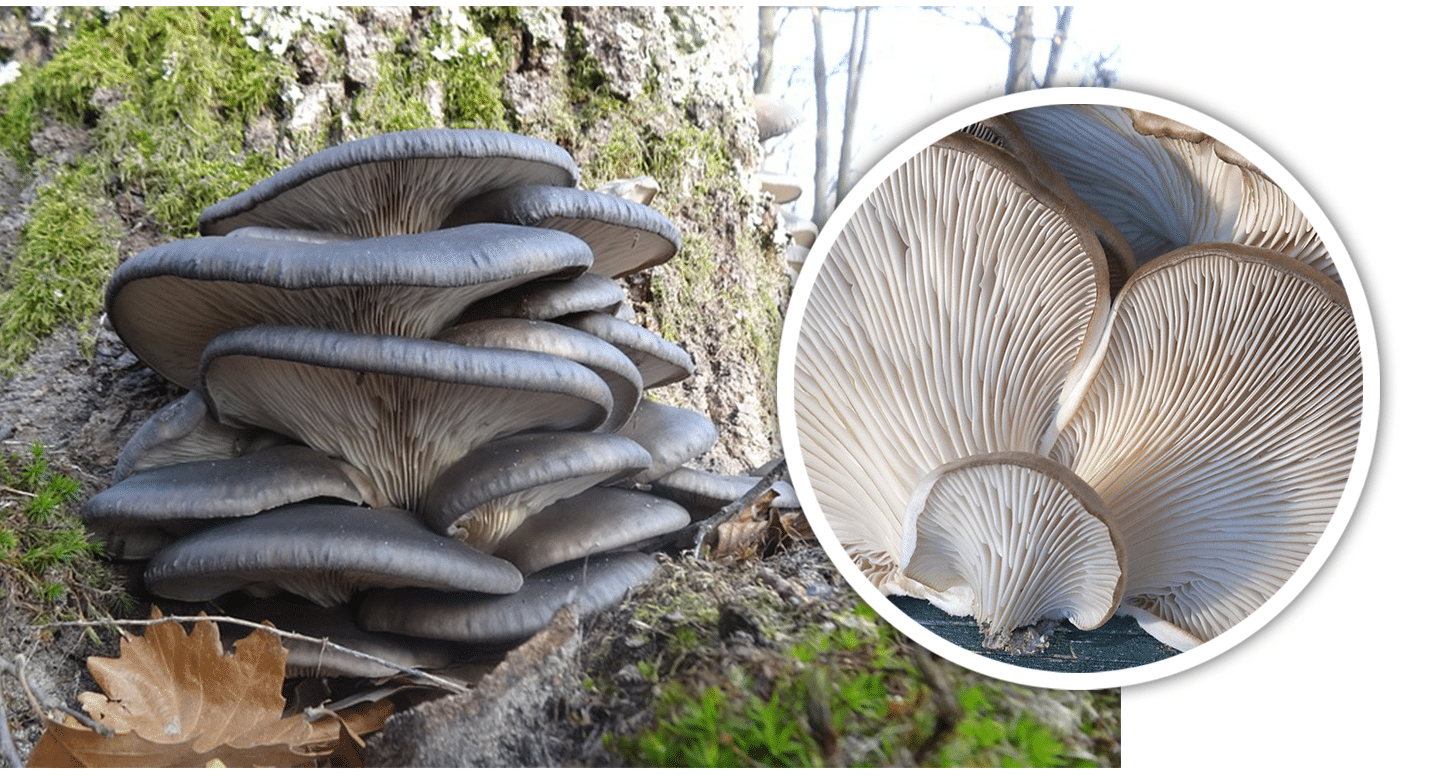 A common sight both in grocery store produce sections and on trees, the oyster mushroom is a delicious, nutritious, and easy-to-identify wild treat. It can grow from winter through summer – it all depends on the oyster sub-species, tree type, and foraging region.

Look for overlapping, tiered oyster or fan-shaped caps growing on deciduous trees and stumps. Caps can be colored anywhere from creamy off-white to gray or brown. The mushroom’s structure is always a tiered arrangement of fan-shaped caps, and the gills are always creamy off-white to brownish. Caps are smooth, often moist, and sometimes have wavy edges. Younger specimens have a more rounded cap shape.

Stems are short and tend to fuse into a single stalk, connecting several of the caps into one stem. The gills will run nearly all the way down the stem. Make sure you see no sign of a “veil,” which is a skirt-like covering between the stem and the edges of the cap.

By the time gills are brown, the oysters are too old to consume, as the texture will be dry and unappealing, so look for the fan-shaped caps and lighter-colored gills while hunting. 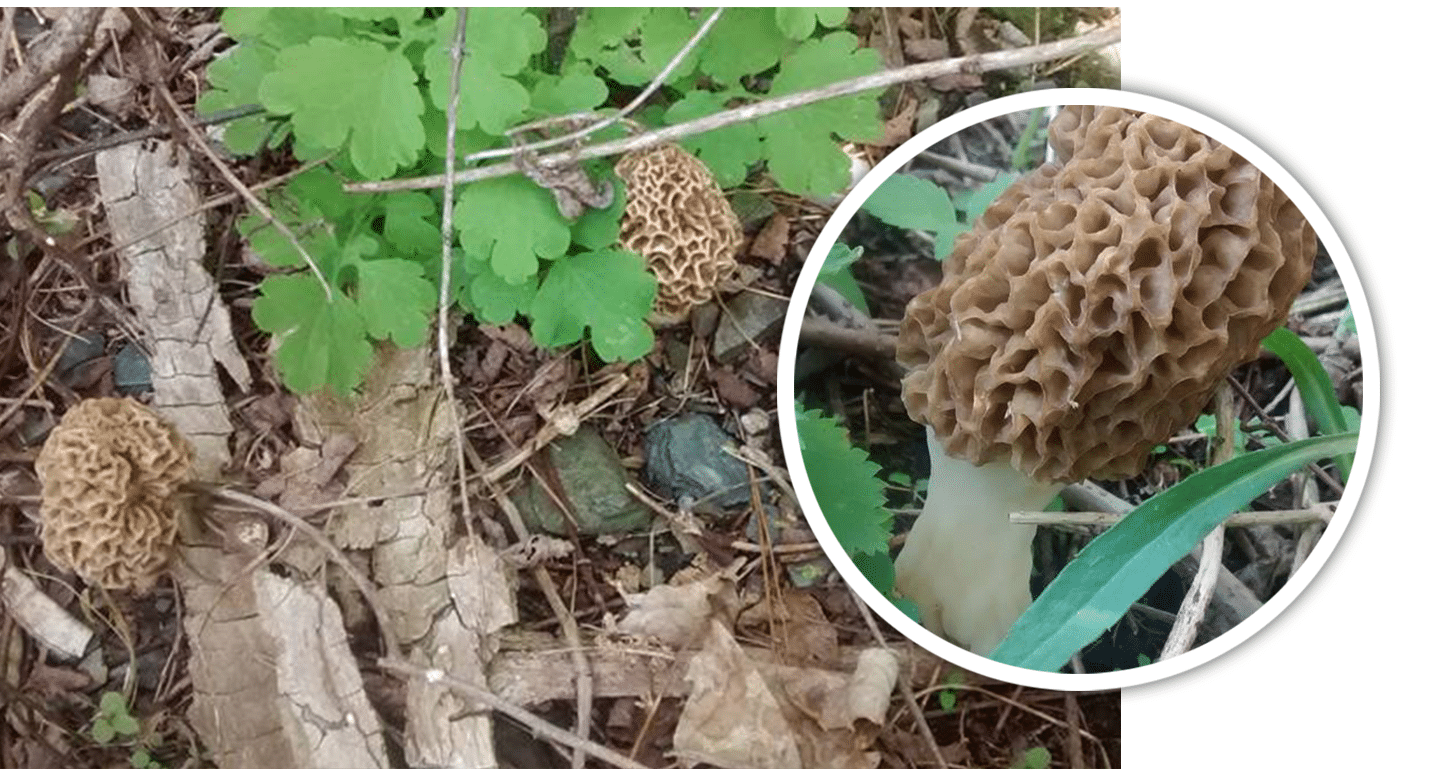 One of the most prized edible mushrooms in the world, morels can fetch upwards of $40 per pound on the open market. They’re also incredibly easy to identify! Look out for the signature deep pits and sharp ridges of the morel’s yellowish to black or brown caps.

The superficially-similar “false morel” has only ridges or waves, rather than the deep pits of true morels. Another way to distinguish true morels from false morels is cut one open, and make sure the mushroom is hollow and from the tip of the cap all the way through the stem. True morel caps also tend to be longer and narrower, while false morels often have wider, stubbier, chunkier caps.

Morels have an extremely rich and meaty taste. They appear in late spring through early summer, and like to grow on south-facing hills on the edges of woods. They also pop up around dead ash, elm, and other trees. Like many species, remember where you found them and check at the same time next year, as they often return each season.

Just be careful who you tell about your discovery, or the word may spread and there will be none left for you — according to Alexander Schwab, author of the excellent book Mushrooming With Confidence, morels “are so prized that details of the sites where they are found are left in wills or passed on from the deathbed.”

4. Hen of the Woods (Grifola frondosa) 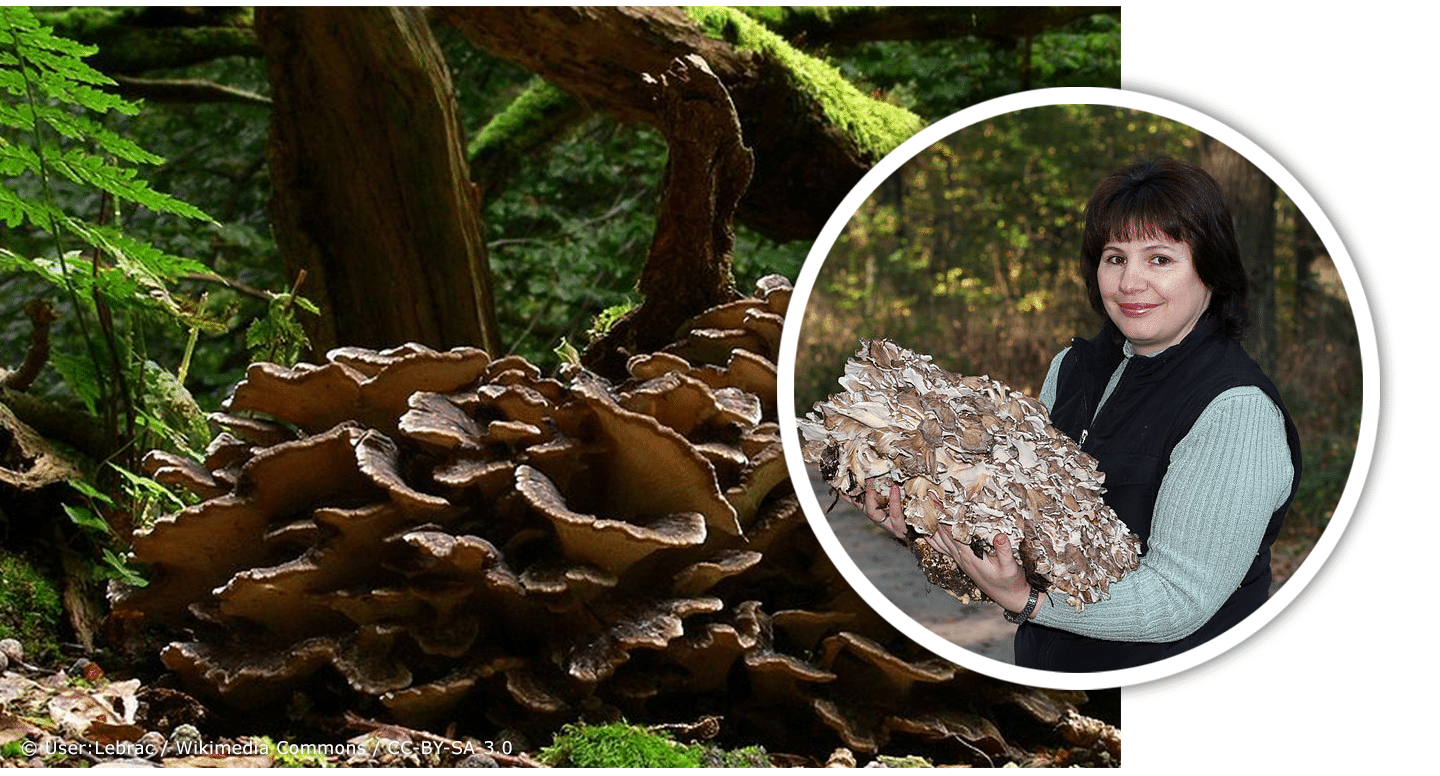 Hen of the Woods is often discovered when hunters recognize its large, distinctive brownish clumps at the bases of oak trees and stumps. This prized edible mushroom consists of overlapping fan-shaped grayish to brownish caps that, when a specimen is cut in half, are revealed to descend into a single, thick base stem. Interior flesh is whitish, sometimes with a tinge of yellow.

Inspect the bottom of the caps, and you’ll see a network of spore tubes. Hen of the Woods doesn’t really have poisonous lookalikes…in fact, superficially-similar looking species like the Cauliflower Mushroom and Umbrella Polypore are delicious edibles as well. 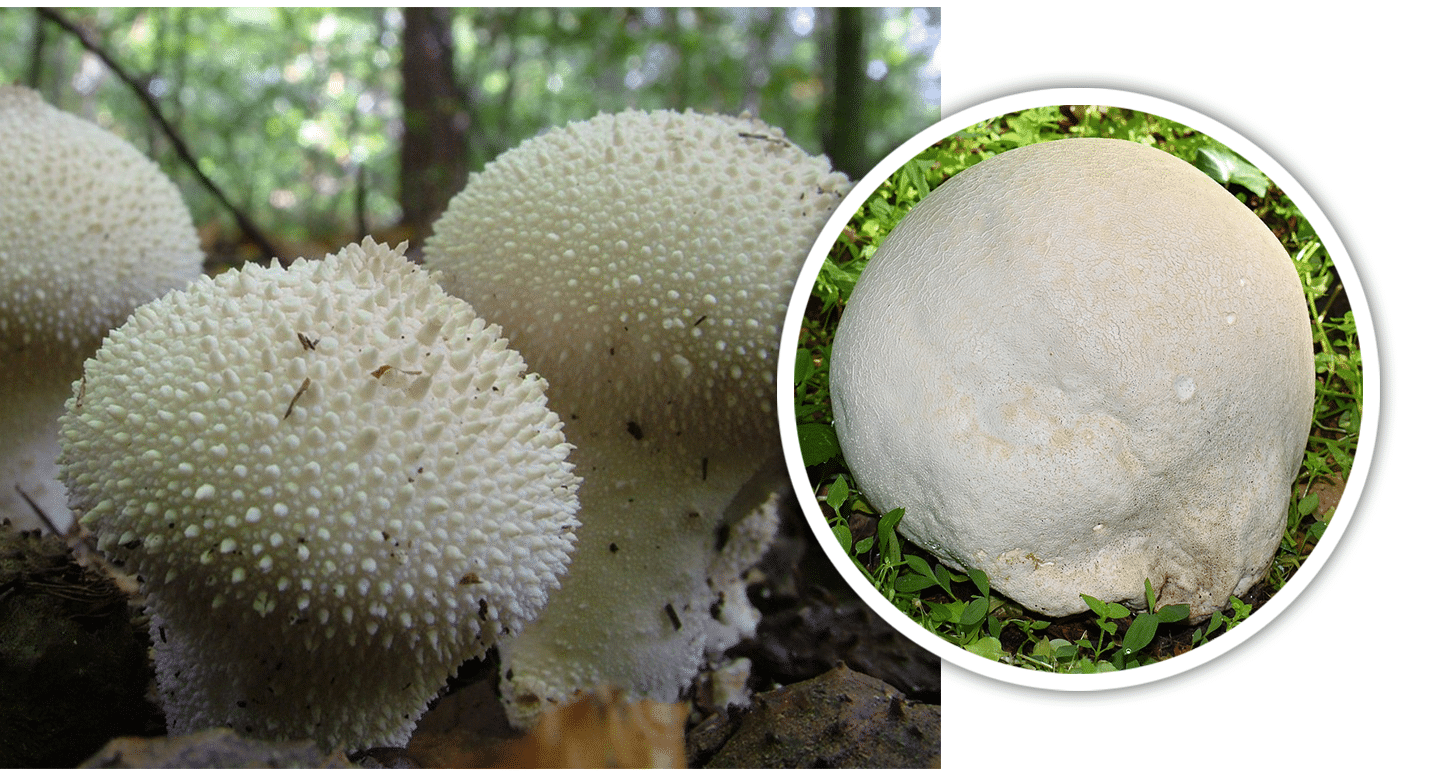 Puffballs, a scourge for lawn owners everywhere, are a mushroom hunter’s treasure. They have a delightful, marshmallow-like texture, and large puffball species can easily become as large as volleyballs. 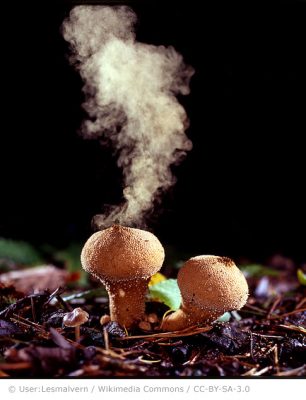 Some are smooth, some are spiny, some are warty, and some develop crusty mosaic patterns on their skin as they age, but a few common characteristics can be used to ensure your puffball is of the edible variety.

First, the inner flesh should be uniformly white and marshmallow-firm. The exterior skin can be slightly off-white. If there is a discernible stem, the inner flesh should continue uniformly throughout. In other words, puffballs don’t have a true, separate “stem” structure…just a narrower base section with nothing separating it from the top part of the mushroom. Puffballs never have a strong smell. Beware of baby amanitas, which look similar but lack the true puffball’s pure, completely uniform white inner flesh when sliced in half.

As puffballs age, they darken and release dramatic clouds when poked or kicked. By this point, they are far beyond the point where they can be eaten. Playing with aging puffballs can help spread the spores, just be careful not to breathe them in!

Basics of Cooking and Storing Mushrooms

For most wild mushrooms, sautéing in butter with salt and pepper is a great way to test the flavor for the first time. Dehydrating and grinding them up is usually effective for starting a rich soup and cooking stock that will have a long shelf life. Giant Puffballs are a bit more unique-tasting, but make for excellent “Puffball Parmesan.” 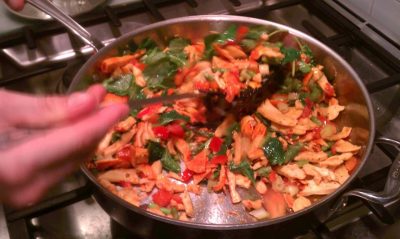 Chicken of the Woods you can slice up, season, and use in stir fries, tacos, and anything else that’d use chicken strips. The earthy flavor of Hen of the Woods, known as “Maitake” in Japan, has lent itself well to many Japanese dishes.

Morels are fantastic with eggs or steak, or chopped and tossed into vegetables. Just use caution if you’re a drinker, as some people report stomach upset when combining come morels, especially black morels, with alcohol. Oyster mushrooms are versatile.

An easy way to figure out what to do with most wild mushrooms is to just look at recipes that call for store-bought varieties. Chances are, using wild mushrooms in the same recipes will take those dishes to the next level in terms of both tastiness and nutrition.

Some varieties freeze better than others, and some rot extremely quickly. Transport and store in paper bags only, and for the best results possible, you can’t go wrong cooking and eating them the same day you find them!

Mushrooms Piqued Your Interest? Here are a few excellent resources worth checking out:

For region-specific guides, check out:

A Review Of The Ark 390 Food Bucket