These two massive storms might be the most expensive to recover from in American history. Hurricane Katrina saw damage worth roughly $100 billion and she holds the top spot of all Atlantic hurricanes in cost– at least until Hurricane Harvey is tabulated.

The main differences between Hurricane Harvey vs Hurricane Katrina are:

Some estimates suggest Hurricane Harvey “could require up to $180 billion.”

But, thankfully, Hurricane Harvey has cost far fewer lives than Hurricane Katrina. A final tally for Katrina has never been made, but estimates are at roughly 1,306. The latest estimates from Harvey put the death count at 80.

Have we gotten better at surviving hurricanes?

Some argue the populace was more prepared for Harvey than for Katrina, that federal response was swifter, and that social media has allowed for great volunteer coordination. To some degree, all of this is true.

But there are key issues that both of these storms had in common, which are certain to plague the country the next time the costliest storm in history hits.

Perfect Hurricane Prediction is Not Possible (Yet?)

Katrina first hit Florida as a category one hurricane. Over warm waters, it restrengthened. NOAA, operating with the best prediction methods available at the time, knew that the now category five hurricane was going to cause serious damage.

On the 26th, NOAA predicted that New Orleans would be hit by Katrina. The mandatory evacuation of New Orleans was called two days later on August 28th. That day, NOAA did warn that levees could be overpowered. Then, the storm hit and the first levy was breached on the 29th.

Chris Velden, a hurricane researcher from the University of Wisconsin, argues that the public needs to be confident in scientists’ predictions. “The public has to have confidence that the forecast won’t only be good in one case but will be good all the time.”

“In Katrina I think, in 2005, there was still enough uncertainty in the forecast, even though it was a good one, that they weren’t ready to pull the trigger on an evacuation two days in advance. Had they done that, it would have saved a lot of lives.”

Twenty-four hours is just not enough time to get everyone out of the way. But, that’s the standard timeline NOAA still operates on. They give 36 and 24-hour warnings, and, to be fair, the closer the storm is to arriving the more accurate the organization’s predictions are.

Before Hurricane Harvey, on August 24th NOAA told Texans that “preparations along the middle Texas coast should be rushed to completion.” Harvey hit on the 25th. I’ve always found this wording a little perplexing.

It reminds me of when government authorities ask citizens to be prepared for 72 hours without government assistance.

Perhaps it is not NOAA that needs to change their outlook, but we who need to change our ideas of which preparations can be left until NOAA’s last warning, and which cannot.

To counter my point, Chris Velden, a hurricane researcher from the University of Wisconsin, argues that the public needs to be confident in scientists’ predictions. “The public has to have confidence that the forecast won’t only be good in one case but will be good all the time.”

Velden connects this to Katrina: “In Katrina I think, in 2005, there was still enough uncertainty in the forecast, even though it was a good one, that they weren’t ready to pull the trigger on an evacuation two days in advance. Had they done that, it would have saved a lot of lives.”

That makes sense, but perhaps its also the feeling of security in scientists’ knowledge may be what prevents people from being as prepared as early as they should be.

Which side do you lean towards? I have a feeling most preppers are with me.

Yes, NOAA has improved prediction in many ways, including with polar-based satellites. Yes, surge forecast maps have now been invented, which could have helped show New Orleans residents just how vulnerable they were next to levys.

Don’t let advancements in scientific knowledge lull you into a false sense of security. These are only pieces of the hurricane puzzle. Experts are now pondering why Hurricane Harvey slowed down once it hit land, loading Texas up with Biblical rains.

When we get better prediction models for hurricanes you’ll know– because NOAA will start giving more precise timelines for storms. Considering the level of complexity they are dealing with, scientists are doing great. But, you don’t need to wait for final warnings to be prepared.

During Hurricane Harvey, it became clear that public opinion is divided on the matter of evacuation. Some decried that Houston was not under mandatory evacuation, and others praised the decision.

Politicians just do not have working scientific knowledge of hurricanes and, like all humans, they are not solely motivated by the facts sitting in front of them. Mayor Ray Nagin only called for the evacuation of New Orleans because the National Hurricane Center Director, Max Mayfield, called him personally. Mayor Nagin said the call, “scared the hell out of him.”

But, Katrina scared the hell out of everyone. A month later, politicians in Texas were looking at the aftermath of Hurricane Katrina when they called for evacuations in light of incoming Hurricane Rita.

The predictions weren’t as accurate for Rita and the evacuation was poorly executed. 102 people died just trying to escape. Since then, we’ve incorporated a lot of lessons learned in that evacuation. But the core question remains every time a hurricane rolls in.

Representative Garnet Coleman asked it, during the aftermath of Rita, “Is the chance of dying greater in the movement than in the storm? That’s the question we need to consider.”

Before Hurricane Harvey, Mayor Sylvester Turner thought the risk of evacuation was greater than the risk of remaining in the storm. “You literally cannot put 6.5 million people on the road,” Mayor Turner argued. “If you think the situation right now is bad, you give an order to evacuate, you are creating a nightmare.”

The solution is simple: take responsibility for your own choices.

What politicians say is a key factor, especially if they are telling you emergency services isn’t going to be available. But they are not the only factor.

The levee broke during Katrina. The reservoir which keeps Houston from flooding was overwhelmed during Houston.

To their credit, Texas authorities were not blind the danger of the reservoir failing, and took action to mitigate damage. They let off the reservoir, and put a mandatory evacuation in place for those who would be affected.

So, no one should be under the impression that infrastructure meant to hold back the natural state of their town will hold under all circumstances. Many of these reservoirs, dams, levys, etc. were designed to meet challenges posed by usual storms, not from the once-a-century disasters.

Why doesn’t this lesson seem to sink in?

Leah Boustan, an economist at Princeton told The Atlantic that its puzzling to economists that people don’t prepare for storms, but they usually don’t (as we all know).

As a possible answer she suggested, “You can observe another city going through it but then it may not be salient until it actually happens to you. ”

One CNN meteorologist said much the same sentiment, “I think people were used to flooding in Houston when they get two to three inches of rain, but nobody comprehended what two to three feet of rain could do. This is truly historic, so people were caught off guard.” 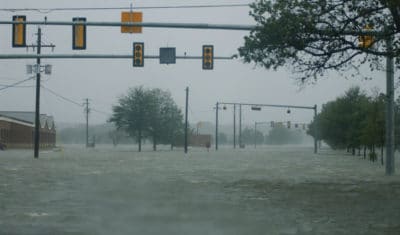 Surely, part of this is just human nature. As preppers, much of what we do challenges this nearsightedness of humanity. It can be overcome, you can learn from another city’s disaster experiences, and apply that to your own situation.

Challenge yourself to consider if you rely on governmental infrastructure to protect you from flooding, or other natural phenomena, and what you would do if it failed.

The Costliest Storm in History

Katrina was the costliest storm in American history, but many wore the dark crown before her. In 1965, Hurricane Betsy set the record for the costliest Atlantic hurricane to hit America at $1.45 billion.

Is anyone surprised Harvey will cost more?

The financial toll of hurricanes doesn’t necessarily reflect their strength as much as it reflects how much wealth stands in their way. America is not growing in wealth as quickly as it once was, so record-breaking storms are actually further apart than they were in the late 20th century.

But, we are still growing in wealth and inflation, of course. We can invest our wealth in ways that protect it from disaster, or we can keep doing this expensive song and dance.

David Samuhel, a meteorologist at Accuweather, argues people “want to live near the water.” Combine the draw of the swimming shorelines with population growth and you have a big problem.

Perhaps it would be different if people better recognized the potential for disaster. Only 20 percent of homes in the Greater Houston Area had flood insurance. In an area where floods are common, that just doesn’t make sense.

I’m not arguing, as so many will (including FEMA) that in light of disasters we should raise our building codes, make better insurance mandatory, and tighten bureaucracy. Certainly, such a suggestion would be bitter in many a Texan’s mouth. Instead, I’m simply calling for reflection, honesty, and grabbing your fate with your own hands.

Hopefully we can keep building on the progress we’ve made in dealing with hurricanes since Katrina. Better science, more informed citizens, earlier preparation, and serious consideration of the worst-case scenario, are our best tools moving forward.

The Best Chicken Feed For Your Flock