Guardline sent me their long-range wireless driveway alarm to review. It consists of a sensor unit and a receiver unit with built-in speakers, along with some mounting gear. 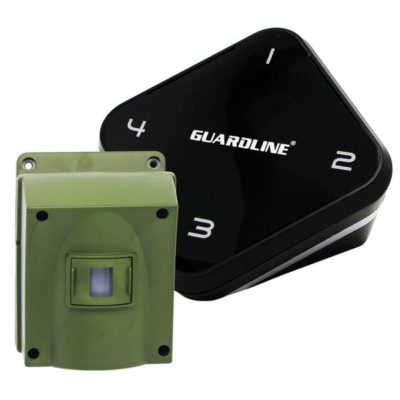 The sensor unit can be mounted at the edge of a driveway, walkway, porch, or other area, and then when something breaks the infrared beam, the receiver emits one of your choice of one of dozens of chimes, sound effects, and melodies, alerting you that something has entered your property. 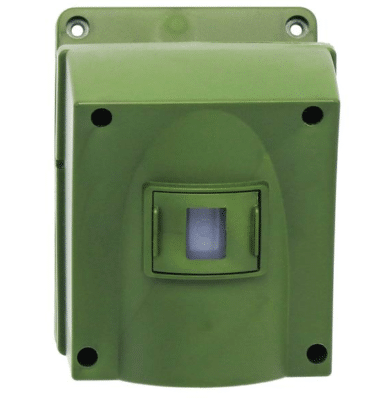 This receiver unit is their long-range model capable of being placed up to a quarter mile away from its sensors, depending on interference like walls, trees and hills. 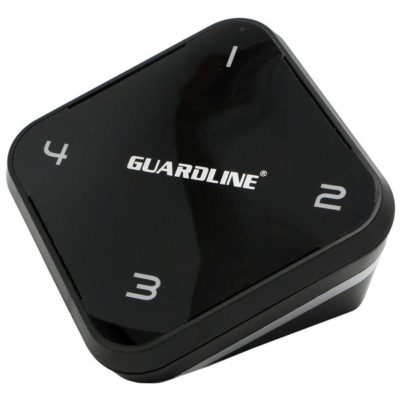 This driveway alarm is a great little piece of added security for any home. If you buy additional sensor units, each receiver can pair with up to sixteen sensors, allowing you total coverage by placing them at strategic locations across your driveway, house, or property.

They only sent one sensor, so I couldn’t try pairing multiple units, but pairing the one they provided was easy. The different zones on the receiver also can be linked with other aspects of your security set-up. More on this later.

Special Guardline Discount Promo Code: For a limited time, BDS readers can take 10% off by clicking here and using code “backdoorsurvival” at checkout!

Out of the box, my batteries were easy to install into the sensor and receiver units with the included screwdriver. 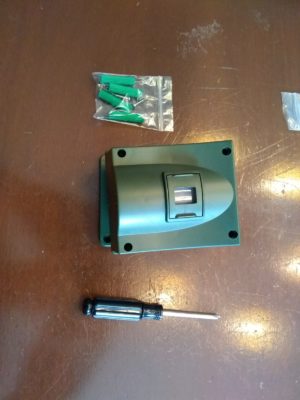 You need four AA and four AAAA, though the batteries for the sensor unit are just for backup when your power goes out. 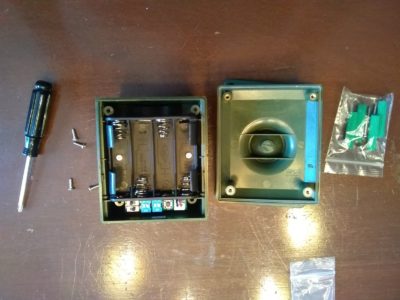 I thought the plastic housing on the sensor felt a just little bit cheap, and the one on the receiver unit doesn’t seem to attach as securely as it should to the back of the unit. However, with Guardline’s lifetime warranty, my slight concern regarding the long-term robustness of the unit was assuaged.

Using the instructions, it was easy to pair the sensor with the receiver and set my preferred tone from the dozens of varieties.

It seemed like it would be equally easy to pair additional sensors. I mounted my sensor on my front porch, using the guide provided. 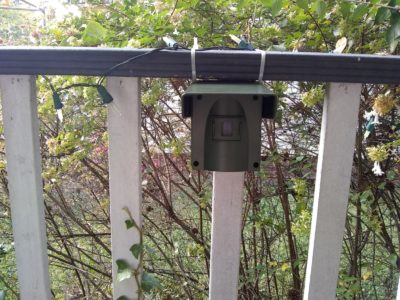 Then I plugged in the receiver in my bedroom, setting it to the squawking seagull sound effect I had set. 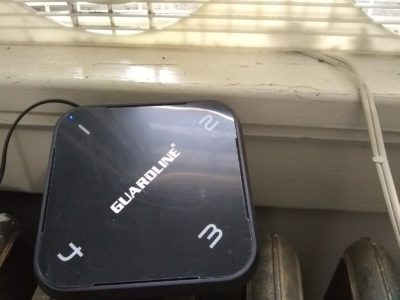 After some adjusting of the sensor using the tips in the instruction booklet, the sensor worked flawlessly. Any time someone walked onto the porch, I would hear those seagulls.

A flowering plant right behind where I mounted the sensor does attract very large bees, and one of them buzzing past the sensor did set it off.

There are bound to be occasional animals and other things that will make the sensor go off, but then again, detecting objects is exactly what the sensor supposed to do.

However, you can minimize the likelihood of false positives by adjusting the position and angle of the sensor.

The batteries give you a good option for power in case of a SHTF situation where electricity becomes unreliable—as long as you have solar-friendly rechargeables. 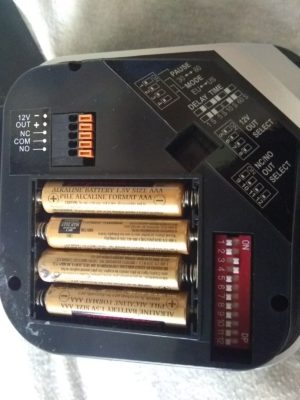 To be truly prepared, and ensure electronic security devices could keep running long-term without the grid, a solar panel that can recharge batteries or have appliances plugged directly into it would be an ideal source of back-up power for this product.

As solar technology gets better and cheaper, I dream of a day when Guardline develops a system with a built-in solar panel to keep the sensors charged from the sun!

One really cool thing about this gizmo is the amount of customizability it offers. When you unpack it, it will have its factory settings which are ideal for most uses and situations.

However, a small switchboard in the battery compartment allows you to adjust an impressive array of settings. For example, you can change the sensitivity of the sensor to pick up faster or slower-moving objects.

You can add a delay, or activate a mode that will allow the sensor to work at night while keeping it from detecting objects during the light of day.

You can also change the sensor’s effective distance, which can help prevent the sensor from things up that you don’t need to be detected—for example, if you want the driveway to be the detection zone, and don’t want animals that aren’t on your driveway to set the alarm off.

I tried out some different configurations, mounting the sensor at various distances and with various objects providing interference mentioned on the box, such as cars and trees.

The results were excellent.

First, I tried placing the sensor on the far end of the yard, outside our tall fence, meaning the signal had to be detected through both the fence and multiple walls of the house.

I didn’t notice much difference at all in the sensor’s ability to pick things up despite the additional barriers between the sensor and the receiver.

I tried placing the sensor in a new location even further away through some trees, but still well within the advertised ¼ mile range. The receiver still went off when I walked past the sensor.

This is huge, as with the ¼ mile range promised on the box, few major obstacles between sensor and receiver will be unavoidable. It’s good to know that a reasonable number of walls, trees, and other objects won’t render the system ineffective.

At night, the sensor seemed to work just as effectively as it did during the day. I tried adjusting the switch in the battery compartment to play with the light setting, changing it so that the sensor would only be effective at night, in low light.

It worked as expected, and the variety of options that can be adjusted with the internal switches is indeed impressive.

But one of the best features of the Guardline driveway alarm is its ability to be paired with other security devices. We’ll get into this next.

One of the internal switches can be used to pair one of the sensor’s four zones with other 12V security devices.

For example, if you had a motion-detecting floodlight outside your house, you could link the Guardline motion sensor with the light, turning it on when the sensor detect a disturbance.

You could conceivably also do this with a separate alarm system, or anything else that uses a compatible 12V power source. Unfortunately, I didn’t have an alternative security device to plug into the Guardline to test this function.

However, I had no problem having success with any of the other many functions and customization options this device offers, all of which worked effectively.

The Guardline driveway alarm system is a fantastic option for nice layer of extra security for driveways, patios, walkways, and more.

Whether you just want an alarm to go off in your absence to scare intruders away, or want a subtle tone to wake you up to prowlers without them ever knowing they’d been detected, the Guardline is an excellent option. 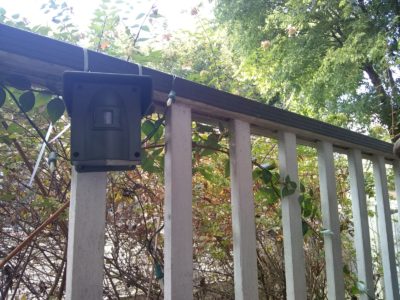 Hook it up to multiple sensors for expanded coverage, or link it up with floodlights and other gear to round out your security system.

For preppers and homesteaders, the only real concern is being able to recharge batteries via solar power, or some other renewable source, so that the system can continue running even in absence of grid power.

This is probably on the only prepper-specific concern with this system.

Other than that and the slightly flimsy feel to the battery compartment on the receiver, the Guardline 1/4 Mile Long Range Wireless Driveway Alarm is a fantastic security set-up whether you’re looking to protect a 15-acre homestead or just a rented apartment.

Where to Buy: If you are interested in learning about purchasing this system, be sure to check this listing directly at the Guardline site. Remember to use code “backdoorsurvival” at checkout to save 10%.

Eric Raue is a nature-loving writer, experience junkie, and former Boy Scout who never forgot that time-honored Scout Motto: Be prepared. Aside from camping and survival, he loves writing about travel, history, and anything he finds strange and unique!

4 Tools to Cut and Chop Wood for Survival

A Review Of The Go Ruck GR1 Rucksack

Six Tips for Dealing With the New Prepper