Editor’s Note: This resource has been revised and updated for 2020.

Every level of prep needs a pepper spray. It can provide simple protection from everyday assailants, or it can even be an effective and non-lethal option to defend yourself without rule of law.

The immediate burning pepper spray inflicts leaves most attackers temporarily blinded and struggling in pain. However, the more someone is exposed to pepper spray the better they can handle and recover from its effects. If you have to use pepper spray, you should be running away and alerting the police to the incident, if the police are still around that is.

But the market for pepper spray is over-saturated. There are plenty of brands, strengths, and formulas, so which is best to carry on your person, or to put in your bug-out-bag? We’ve figured out which works best, and we’ll talk about the pros and cons of a few other notable brands too. But first, let’s talk about the legal issues, as pepper spray is very restricted in some states.

Be sure to look into your local laws surrounding pepper spray at the county and state level. New York has huge restrictions on the use, shipping, and sale of the spray. Other states have limits on the size and potency of the spray you can carry. Most brands won’t ship outside the continental U.S.–you’ll have to buy your spray in a local store.

You’ll see that some sprays are intended for use against dogs. These are low potency and short-term sprays developed to prevent inflicting long-term damage on dogs. Dog sprays may not be very effective against humans, although they will be better than nothing. On the other hand, if you use a human pepper spray on a dog you may, in some states, be breaking the law. Remember, dogs have very sensitive noses, it does not take much to scare them off.

Other kinds of pepper spray are intended for use against bears, and these are extremely potent, but create mists, not direct sprays, because you’ll be very hurt by the time you get close enough to a bear to hit it in the eyes.

I would also be remiss not to warn you that pepper spray has contributed to death before, either because another individual who has sprayed had asthma, breathing conditions, or some other health issues, according to the U.S. Department of Justice.  Don’t use it on someone unless you have to.

How is Pepper Spray Measured?

In order to compare the effectiveness of pepper sprays, you have to understand how it’s measured and what it’s made of. Pepper spray is made from the active, burning ingredient in peppers, capsicum. The ingredient is turned into an oil named oleoresin capsicum, or OC. Police and military people may call all pepper spray OC, but some have other ingredients. The percentage of OC in a spray can range from less than 1 to 20 percent. 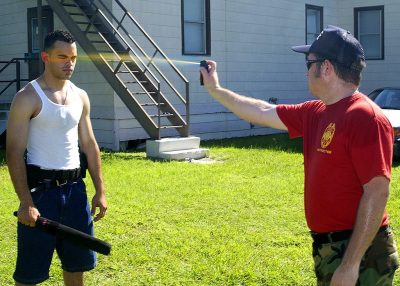 Sabre Red, a top brand, uses another measurement method, called major capsaicinoids. It measures the percentage of the hottest capsaicinoids in the product. Sabre Red argues this is a superior method of measuring actual hotness.

As US Concealed Carry points out, Sabre Red did commission studies which found other brands weren’t as hot as they claimed. That doesn’t mean that their measurement method is superior, though. US Concealed Carry also found that Fox Mean Green solution was the hottest, with Fox’s other formula and Sabre Red’s formulas closely behind. We cover these formulas below.

Sabre 3-in-1 Pepper Spray with Clip

30 FEET: Maximum range and protection, traveling up to 10 Feet (3M) further than other bear spray repellents
Rapidly deploys a heavy fog of 1.58 oz (45 grams) per 1-second burst
Incapacitates a bear’s ability to see or smell while causing no permanent injuries
Check Prices & Reviews

What about mace? Mace is essentially tear gas. This chemical is not inflammatory, only an irritant, and is, by itself, inferior to pepper spray made from OC. But, it is often combined with OC, and that can make for a more effective spray.

Sabre is a very reputable brand in the pepper spray industry. Their products are used by police forces.

This version is on a key ring, which makes it hard to forget and always in your hand in parking lots. For preppers who are worried about crime, or who are looking to outfit a family member who drives home at night alone, this is a reliable and cheap option.

The canister has finger grips, which makes it easier to aim. It has a quick release button that will detach it from the key ring at a moment’s notice and a locking top that prevents accidental discharge. Despite all of these features, which make the product easy to use, you still need to practice with it. If it’s too simple to use, it would fire accidentally, so the spray mechanism and the release button require a surprising amount of force. Your safety depends on your speed, so practice! 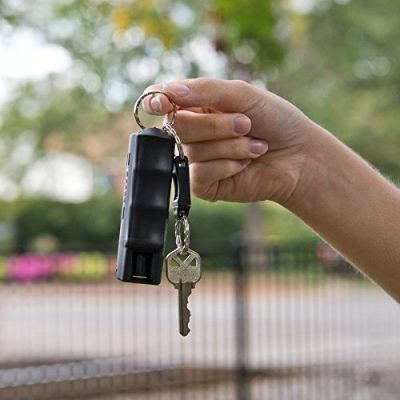 The canister has a 10 ft range, which is all you need for the parking lot defense this product is intended for. It’s a stream delivery, which is ideal for a single attacker situation. If you use it, you’ll want to spray your attacker from ear to ear. It, on average, gives 25 short bursts. It’s a small canister, but that’s the point, it has to be simple enough to carry with your keys.

Our second choice is also from Sabre, because they have consistently rave reviews for reliability, and that’s what matters most when you’re defending yourself. The 3-in-1 pepper spray formulation is more potent and painful than their key case pepper spray, but not as powerful as Fox Lab’s spray.

This formula also has a UV component, which is intended to help police identify who you sprayed. This is a larger container, delivering 35 short bursts so that you can use it a few times during a SHTF scenario.

But, this is our top recommendation for a general purpose defense and everyday carry.

Our third choice is Fox Lab’s Flip top pepper spray. It has more power in SHU than any other pepper spray at 5.3 million SHU. It’s also the lightest, though not the smallest, formulation, which makes it easy to carry. It also has a longer range than Sabre red products, at 12 to 20 feet.

It has a “heavy” stream but will only deliver 12-15 half second sprays. That’s more than enough for a single use but may not last as long as Sabre Red’s 3-in-1 product. If you’re not looking for a WROL option, but just for protection from an assailant, you may be interested in Fox Lab’s green pepper spray, that marks attackers in green dye. Plus, that formula is significantly hotter.

This product has a flip top for safety, which comes with pros and cons. Some have said that it slips off easily, increasing the probability of accidental firing. On the other hand, that means it’ll be quite easy to spray quickly when you’re being attacked. Personally, I would rather a pepper spray be available when I need it and be a risk for misfire than be hard to use. But, that’s a decision you’ll have to make for yourself.

It is our top choice to store in your bug out bag because it is so light.

Wildfire’s pepper spray is very comparable to the others, with 18 percent OC or 3 million SHU. It sprays 15 to 18 feet, beating out Sabre Red but not Fox Labs.

It’s larger than the others at 4 ounces and is also a heavy stream pattern. The company claims that the spray is the fastest working, but all pepper spray works fairly quickly, I don’t think there are many situations where the faster speed would be too significant.

Wildfire pepper spray is the most expensive (for humans) that made our list, at 13.35. This is our top choice if you’re concerned about how quickly the pepper spray takes effect.

Bear spray is a whole other animal than pepper spray intended to stop humans. Bear spray requires a huge range and a powerful shot that creates a fog, not a spray. While intended for use against bears, it would work against other wildlife in a pinch too. Using it against dogs will get you in legal trouble in some states—its certainly overkill for dogs so don’t be cruel.

We recommend the Frontiersman bear spray with its chest or belt holster because speed is even more important in deploying the spray against a bear. You probably won’t see a bear attack coming and they will probably be hitting you from the side or the back. You have very, very, little time to deploy this, so practice with it.

This canister is the largest at 7.9 oz, and it has to be to deliver the density of fog needed to fend off a bear. The spray works from 30 feet and was tested on real bears (brown, black, and polar). 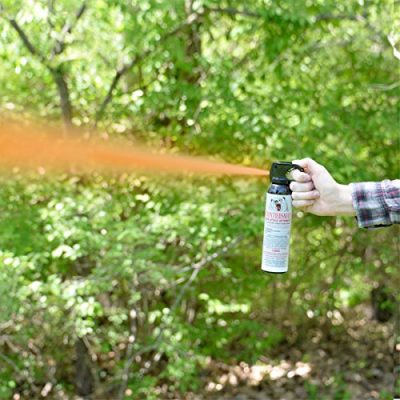 It’s the most expensive option, but well worth it if you need bear protection.

Whichever pepper spray works best for your circumstances, the most important factor is practice. If you don’t know how to quickly and properly deploy the spray it can’t help you.

How to Homestead When You Rent: Part One

How To Make Your Own Lip Balm

What’s Coming To The Prepper World In 2019

4 Responses to “The Best Pepper Spray to Keep With You”