How much do you know about long-term storage for household batteries?  Until I started prepping, I did not have a clue.  Even after I started to prep, I was unsure, although it did make sense to store batteries at room temperature, not too hot and not too cold.  Still, when the topic came up while out with friends, some wise guy mentioned keeping batteries in the freezer and I was lost.

Shortly after that, I check snopes.com and learned no, batteries should not be refrigerated or frozen.  Snopes is not always correct so I decided to ask my pal Ron Brown for his opinion.  Ron is a retired industrial engineer and my go-to person when it comes to this kind of thing. 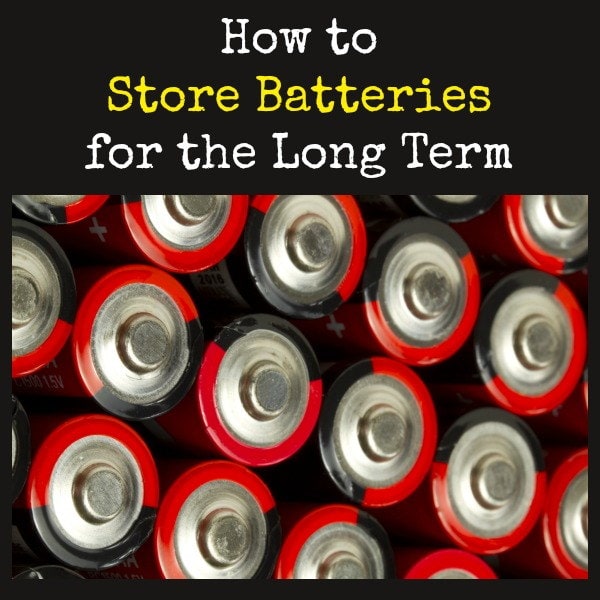 Rather coincidentally, he told me he had already performed a battery test using standard run of the mill flashlights and run-of-the-mill carbon zinc batteries.  Here are the results of his testing.  You might be surprised.  Or not.

How to Store Batteries for the Long Term

I had a childhood friend that, when he needed flashlight batteries, got them from his mother who stored them in the refrigerator. Later, when I mentioned this to a college roommate, I was informed that HIS grandmother went a step further. She used the freezer for battery storage.

As preppers, we should probably all know the answer to this question: Can we extend the shelf life of a flashlight by storing batteries in the refrigerator or freezer? What do you think?

One thing is certain. If you freeze or refrigerate batteries, you must let them thaw for a couple of days and come up to room temperature before using them. Your car battery, for example, might crank on your hard-starting car for 15 minutes in the summer before dying but only two or three minutes in the winter. Cold saps battery life dramatically.

As a child, comparing the performance of my flashlight to my friend’s flashlight (equipped with refrigerated batteries), I never saw much of a difference. But what if I conducted a controlled experiment? Would refrigeration make a measurable difference?

So, a while back I went to the store and bought six “D” batteries. They were neither dollar-store cheapies nor expensive alkaline batteries. They were Eveready-brand carbon-zinc batteries. I marked the date on the packages and put two in the freezer, two in the refrigerator, and two in the cupboard over the kitchen stove. Because of cooking heat, the last two were slightly above room temperature, both summer and winter, for the duration. 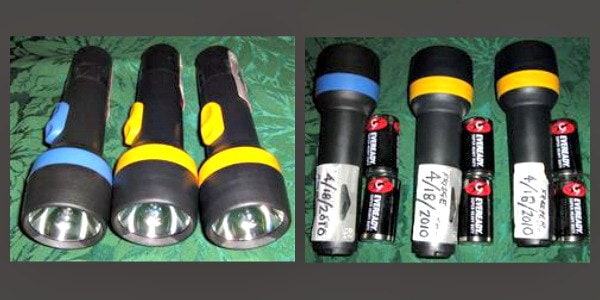 After two years, eight months and three days, I decided it was testing time. So I laid all the batteries on the dining room table for two days to thaw out and equalize in temperature. In regards to the batteries stored above the kitchen stove, I really thought that they would die after just a couple of hours.

I tested them all simultaneously, side by side. I used three Rayovac-brand flashlights, all purchased at the same time, all equipped with standard bulbs (not LED, not Krypton). The flashlights were carefully labeled as to which batteries they contained.

The first thing that impressed me – amazed me, really – was how long the batteries lasted. When first started, they all appeared to give off the same amount of light; they were of equivalent brightness. After SIX HOURS they had all dimmed and needed replacement. SIX HOURS of continuous burning after 2.5 years of storage! I had expected two or three hours.

At the end of six hours they were all burning with equivalent brightness but had all dimmed. I would have been somewhat reluctant to have gone to the mailbox or out to the barn with any of them.

At the end of eight hours, they were all down to glowworm status. At this point the room-temperature batteries gave only a pinpoint of light and the refrigerated/frozen batteries a brighter glow.

BUT, as a practical matter, they all reached the end of their useful life at the same time (six hours) at which point they had equivalent brightness. You could have switched the labels around on the flashlights and no-one would have been the wiser.

I concluded that attempting to extend battery shelf-life by refrigeration was, and is, a waste of time. And that’s worth knowing, is it not? This was not, and is not, armchair theory. This was a real test with real batteries. If you repeat the test, you can expect the same results. Call it the “scientific method” in action.

Checking This Out Further

One thing that surprised me about this test was that refrigerated batteries lasted just as long in real use as the room temperature (or better) batteries.  I am still wrapping my head around that since doesn’t an automobile battery discharge itself more quickly in the dead of winter than the heat of summer.  Perhaps it is my imagination, perhaps it has to do with chemical reactions in a sealed-lead acid battery. (Sealed-lead acid is what you find in a car battery).

Also, the idea of condensation and chemical reactions would seem to be a detrimental factor when it comes to cold storage.  Here is what Energizer has to say:

“Storage in a refrigerator or freezer is not required or recommended for batteries produced today. Cold temperature storage can in fact harm batteries if condensation results in corroded contacts or label or seal damage due to extreme temperature storage. To maximize performance and shelf life, store batteries at normal room temperatures (68°F to 78°F or 20°C to 25°C) with moderated humidity levels (35 to 65% RH).”

When stored at room temperature (i.e. 70°F/ 21°C), cylindrical alkaline batteries have a shelf life of 5 to 10 years and cylindrical carbon zinc 3 to 5 years. Lithium Cylindrical types can be stored from 10 to 15 years. Prolonged storage at elevated temperatures will shorten storage life.

A battery tester (loaded voltmeter) is a simple and effective way to determine if a battery is “good” or “bad”. Most testers place an appropriate load on the batteries and then read the voltage.  A voltmeter without a load can give very misleading information and is not recommended for this purpose. Note that testers are typically not capable of providing reliable run time estimates.

At the end of the day, I do concur with Ron.  Refrigerating household batteries is a waste of both time and refrigerator space.

On a similar note, as much as it makes sense to store household batteries for emergency preparedness purposes, nothing beats using rechargeables.

What I like about these batteries is they can remain fully charged and ready for an extended period of time without discharging themselves.

Because I tend to forget to charge up my drawer full of batteries, this is a huge plus.  I can plug in my charger and have a marathon charging session and I am good to go for a long, long time.

What About The Other Battery Types?

It’s worth noting that the experiment could be repeated with different types of batteries. For example:

If you test them, let me know!

It was fun to get all of the benefits of the battery storage test with none of the work. I know I’ll be reserving my fridge space for distilled water and provisions. My thanks go to Ron for his willingness to share his work with my readers.  He seems to have this intuitive sense of knowing the answers to my questions before I even ask.  Pretty cool.

Of course, those of you that have been around for awhile are familiar with Ron and his 5-part Propane for Preppers Series as well as his series of books on Non-Electric Lighting.  He really knows his stuff!

Amprobe BAT-250 Battery Tester:  I do not know anyone that is sorry they purchased or gifted an inexpensive battery tester.  Mine sits in my desk drawer and is used 3 or 4 times a week.  This newer version is an upgrade from the BAT-200 and well worth the additional dollar in cost.  I  especially like the redesigned side cradle that holds batteries securely in place during testing – no more erratic battery readings from movement off contacts.

Panasonic Eneloop AA Pre-Charged Rechargeable Batteries:  These days, I use Eneloops as much as possible.  They hold a charge forever, or so it seems, and work well in flashlights and small electronics.

Ultra Bright LED Lantern – Collapsible:  I admit to now owning 3 of these collapsible lanterns. It uses 30 different LEDS and is powered by 3 AA batteries, including rechargeables.  Instead of a switch, you turn it on by extending the lantern from its collapsed condition.  With a lifetime warranty and over 8,000 close to perfect ratings, I can see why this is popular.

BYBLight TML-T6: This flashlight is extremely bright, casts wide angle and, when zoomed, a very focused beam.  I swear that if there were a rattlesnake out in the desert outside my back yard this flashlight would find it.  It’s a sturdy thing with an aluminum casing that is not at all heavy.  It has 5 built-in modes including the standard high, medium, low plus a strobe and SOS mode. It includes a rechargeable battery and a charger plus an adapter to hold AAA batteries.

Just to see it stacks up with my other favorites, here is a photo showing the differences in size and form factor. 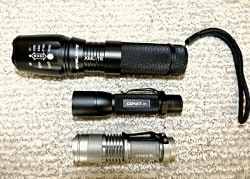 Cyalume SnapLight Green Light Sticks: These are fantastic.  Each lightweight stick glows for 12 hours. They are well priced and hold up well, even when packed around in a pocket or handbag.  For more information about glow sticks and chemical lighting, read 10 Reasons to Add Glow Sticks to Your Survival Kit.

MPOWERD Luci EMRG Inflatable Solar Lantern:  This is the original Luci EMRG Solar lantern. I have put mine through its paces and it is one tough cookie.  It has weathered both a wind storm and rain storm while hanging outdoors for a month.  Lightweight, waterproof and shatterproof, Luci EMRG provides ultra-bright, reliable light to guide your way indoors and out, through blackouts or extreme weather conditions. Plus, solar batteries and solar panels are a renewable energy source, so you can’t go wrong there. 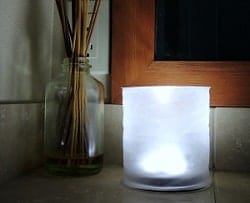 The Winter Warmer: The Best of BDS Winter Preparedness Posts

Dealing with Poo After a Disaster

24 Responses to “How to Store Batteries for the Long Term”