If you’re bugging out to the wilderness, or if you’re bugging in near the wilderness, trapping can be a great source of food. The major benefits are that once you’re set up, trapping doesn’t take up much time. If you intend to patrol your property anyway, checking the traps takes even less time. And if you lack the skills (or the ammunition) to hunt, bringing in protein through trapping can be very important.

Trapping might be successful for a short period of time in an urban area, assuming most humans have died of the disaster and therefore competition for this meat is low, but you’ll soon find you have to move to a more plentiful area.

Mostly, learning to trap benefits preppers in the wilderness. Even while you’re on the move, trapping in a wild enough area can bring in breakfast.

The Knowledge You Need to Start Trapping

To be a successful trapper, you need to have knowledge about the animal you are trying to trap. For this article, we’ll use rabbit or hare as our example. 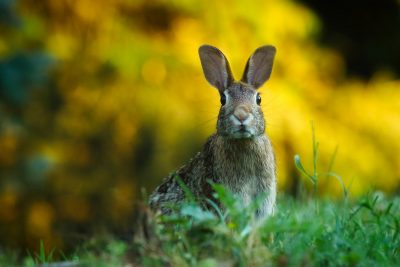 It’s a plentiful animal that you’re likely to have wherever you’re trapping, and you can bait it with greens and veggies, a good trade for the potential of meat. Plus, skinning a rabbit is fairly easy for the beginner.

As for terrain, rabbits like partly open fields full of clover, grasses and their other favorite foods. They tend to eat where shelter, in the form of bushes or logs, is nearby.

Rabbits are very habitual, which makes them a great target animal for the beginner. In fact, if you bug-in on your own property you’ll have a big advantage, because you’ll probably know where the rabbits like to hang out.

A rabbit burrow is often a small hole (10-15 cm in diameter) dug into a slope. While it can be useful to identify a rabbit burrow, trapping right outside of it is often not a great idea.

Rabbits can take the time to really survey their environment from the burrow, and can easily retreat when they sense something is wrong. Plus, there will often be multiple exits, so a rabbit can avoid your trap. 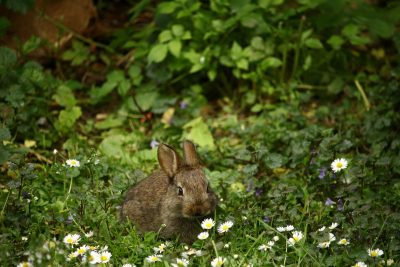 Rabbits do not keep their babies in their burrows. Instead, they make separate shallow nests covered with their own hair and grasses. Mom will return once or twice a day to feed them. Don’t trap babies, or nursing moms, you won’t get much meat and you’re cutting into your own supply.

For legal reasons, you are likely going to want to start out using purchased traps. Primitive, hand-made traps can be illegal, in part because they are usually less humane, and, could be a danger to humans if made large enough. But, you likely won’t have access to purchased traps while you’re bugging out. Knowing how to make a trap can get you a meal anywhere.

To make a survival trap you need a knife, cord, wood, and, optionally, bait. I suggest you start with the simplest traps, aiming for plentiful small or medium-sized animals.

Try to disturb the environment as minimally as possible so there’s nothing to indicate to the animal that you were there. Remember that animals will be using smell too, so make the trap off-sites, try to match materials to the trap location, and use gloves.

A snare is simply a noose. As an animal moves through it, it pulls the noose tight. The more the animal struggles, the more firmly it is trapped.

You can make a snare out of any string, wire, paracord, or natural cordage. However, remember that snare material needs to be strong. Even small animals will put up a fight, especially if they get caught a while before you show up.

My suggestions are to make simple snares ahead of time and place them in your bug-out-bag.

To make a more successful trap, you can add a spring element to the snare. Young, small saplings can be harnessed to pull the small game up into the air after it is caught. This increases the chances the animal will die a quick death, and can help keep other animals from stealing your prey.

The idea behind this trap is that the animal is first caught in the snare. When it struggles, it dislodges the top trigger piece from the bottom. This releases the sapling, pulling the snare and the animal up into the air. If you caught its throat, it should be strangled to death.

There are many other modifications to snare traps, but this is easiest to start with. Also, be warned, you may find that your snare traps catch the leg of larger animals, especially if you’ve made them strong, so always be prepared to deal with them.

Deadfall traps drop heavy objects on the animals in order to kill them. You have to be smart about setting these, so that you don’t hurt yourself and don’t endanger other humans. For starters, don’t stand under the weight.

The idea behind this trap is that the animal moves under the logs to get to the bait. As it nibbles on the bait it pushes the “Y” bar, which moves easily because it’s only resting on a point. When the “Y” wood falls down, so does the crossbar and the heavy logs. These should knock out the animal.

There are plenty of other kinds of traps you can make by hand, including net traps and spear traps (which can easily maim you and aren’t for the beginner so we won’t cover them here).

Keep in mind that none of these traps are likely to be humane and give you a quick kill. Instead, you need to check your traps regularly and be ready to dispatch a struggling animal when you find it.

While you might be subject to a limit by your game laws, in a SHTF situation, it’s always better to have more traps to up your chances of success. Even if the game you’re bringing in is small, a few small animals can make a meal. With a little practice, trapping can be an even more viable method of getting calories.

The Truth About Privacy Online and Beyond In The Modern Age

2 Responses to “Guide to Trapping for Beginners”