Let’s face reality.  As much as we believe in family preparedness and prepping, the majority of our peers think we are nuts.  Although we would never tell them that they are the one’s that are nuts, we might possibly put up a good argument in favor of prepping.

Prepping is insurance, right?  You know it and I know it but the rest of the world?  Not so much.

When it comes to discussing prepping with non-preppers, the conversation can get quite heated.  Been there, done that. 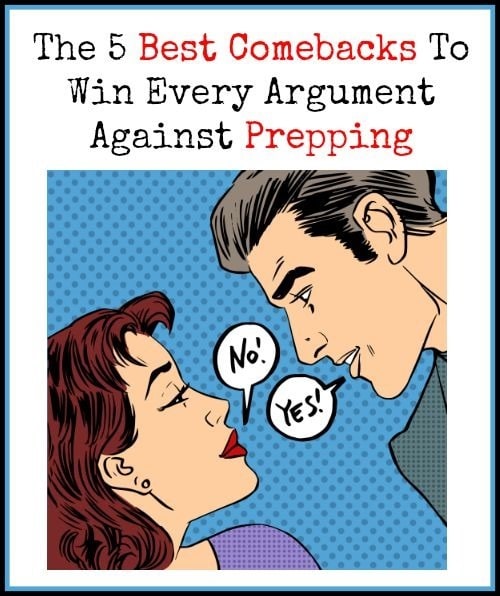 I have recently had the pleasure to of discussing this topic with blogging colleague, Dan Sullivan.  For those of you that are not familiar with Dan, his website is Survival Sullivan and even though it is fairly new, it is one I believe you will enjoy.

Next time, instead of getting upset, angry, and irate, consider these five comebacks that Dan is sharing exclusively with Backdoor Survival.  They just might help you win every argument against prepping.

These 5 Comebacks Will Win You Every Argument against Non-Preppers

The fights, arguments, and mockery between us, preppers, and the rest of the world are never-ending. Every once in a while I read an article that makes us look bad for doing something to protect ourselves and our families… and I find that a little bit offensive.

In a world where people kill each-other, steal from each-other and are just cruel to each other every single day, I find it somewhat annoying that those who choose to prepare are considered crazy. Of course, the fact that some survivalists make the news by doing something stupid every now and then, that propagates the wrong ideas about preppers (who are often mistaken for survivalists) and… it’s annoying to say the least running into people who have no idea what they’re talking about.

Still, if you’re going to prepare, you’re gonna run into these types of conversations whether you like it or not so… the comebacks below might help. Just don’t be afraid to use them.

#1. Tell them about small-scale disasters and emergencies

Ask anyone what they think about prepping and words like “Doomsday” and “zombies” immediately come up. Obviously, this couldn’t be further from the truth as there’s a huge number of smaller-scale disasters for which everyone should prep. Just by enumerating some of them and you can win the argument:

If we do the math (which I haven’t, not yet, at least), we can safely assume hundreds of Americans die every single day from these things! 50,000 U.S. citizens die in car crashes every year, that’s 136 souls a day. 1 in 36 Americans end up in the ER each year. These two stats alone show us just how many people put their own lives in danger and it is staggering.

In some cases, you can ask them the same thing about their house. Why do they pay insurance? Is it because they have to or do they really expect their house to catch fire and their car to crash? Even if they do say they’re paying because they have to, ask them how come they don’t think it’s crazy that literally everyone is paying car insurance and have no problem with it.

You can then go ahead and tell them that prepping is also a kind of insurance, one that you get because you know you have to, without anyone forcing you to do so by law. To really nail it, you can finish off by telling them that you shouldn’t take precaution measures just because the authorities tell you to, you have to be responsible and assess your own risks, then prepare accordingly.

#3. Dig up old stories in your town or neighborhood

Do you know some of your online local news websites? Great. Here’s what I want you to do… Go to Google (or your favorite search engine) and type the following:

…where MyLocalNewsWebsite.com is the address of your chosen website. You can perform several searches for each of these news websites.

You’re gonna find a huge number of stories of accidents that happened near your home. This just builds on the argument #1 when I suggested you talk with them about small-scale disasters. The difference is you actually dig up those critical events that happened close to you and, if possible, they are also recent. Surely you will find plenty.

For example, during the 12 years I’ve been living at my current location, I’ve seen two house fires (one of them killed a person). Plus, one little old lady across the street from me got robbed in the middle of the afternoon by some guy who simply jumped her fence. To these I might also add the various things that happened to my relatives and friends. Surely you can remember a lot of such stories too, you just need to take your time to think.

The key is to bring the others into your reality and to talk with faith, passion or whatever you want to call it in a way which gets them sucked into your frame of mind.

Well, they are. And they’re spending millions of dollars too. If they don’t believe you, point them to this article, for example (there are lots of others, of course).

Obviously, they’re doing it wrong and paying huge amounts of money to screw up, but the fact that they’re well connected and still scared of what’s to come shows that they know something we don’t and that works in your favor.

Sometimes it’s just better to not engage in any arguments and leave them thinking whatever they want about you. If they prefer to cling to their own beliefs, that’s their problem. Silence is, sometimes, the best argument you can have.

Ok, those were it. I tried my best to bring you my best arguments but, in addition to them, you can still use these:

The bottom line is you have to talk in an assertive manner: confident tone of voice, clarity and self-assurance but without sounding aggressive. Otherwise, you’d just be fitting into their stereotypes.

See, I stopped caring what others think of me a few years back and I couldn’t be happier… because instead of worrying and being in a constant state of frustration, I finally got the peace of mind which allowed me to focus on what’s important to me as opposed to what’s important to others.

About Dan and Survival Sullivan

Growing up in a small 2nd world country, Dan learned from a young age to love nature, animals, to live frugally and to appreciate the little things in life. He started writing about survival when he got tired by the lack of quality information and realized people just need the facts.

Dan has declared war on fluff and is winning battle after battle with each article he writes on SurvivalSullivan.com.  In addition to his website, you can find Dan on Facebook and Twitter.

Before closing, I want to say that I too want to fight the battle against fluff!  I can’t remember if I have said that publicly before or not, but one of my peeves is the proliferation of prepper websites that are either a rehash of government documents or worse, content that has been spun from other sites without attribution.

As I mentioned at the first of the year, I strongly feel that my role as a responsible blogger requires me to share not only my own material, but selected articles from other, lesser-known authors that bring value to our niche.

No one person knows 100% about everything and many so-called experts are not experts at all.  As far as I am concerned, each of you, as readers, brings something of value to the table and are an expert in your own right.

Please do not be shy!  Share your tips in the comments section of each article and know that the world values your input.

Below you will find my favorite preps. They cover a mixed bag and none will break the budget.

UltraFire Mini Cree LED Flashlight:  FAVORITE! At the time of this writing, this one is with free shipping.  It is super mini sized, bright and waterproof.  Plus, it uses a single, standard AA sized battery. 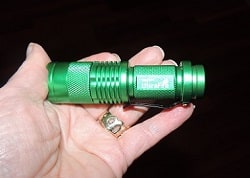 LifeStraw Personal Water Filter:  The LifeStraw is considered the most advanced, compact, ultra light personal water filter available. It contains no chemicals or iodinated resin, no batteries and no moving parts to break or wear out. It weighs only 2 oz.  making it perfect for the prepper. For more information, see my LifeStraw review. 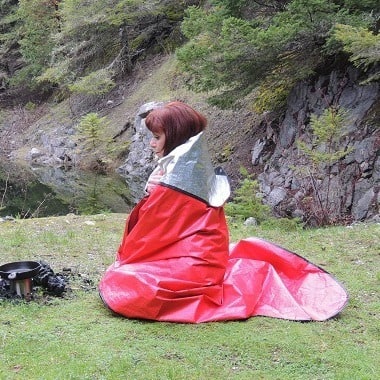 Grabber Outdoors Original Space Brand All Weather Blanket:  I was interested in a re-usable emergency blanket so I purchased one of these based upon the excellent reviews.  This space blanket is definitely “heavy duty” compared to the cheapies (not that they don’t have their place because they do).  A Backdoor Survival reader passed on this tip:

We place one of these blankets silver side up on our mattress underneath the fitted sheet or mattress cover.  It reflects body heat like you wouldn’t believe, instead of the heat being absorbed into the mattress.

Maximal Power FC999 Universal Battery Charger: This nicely built charger will charge charge AA, AAA, C, D, N, 9V, Ni-MH, Ni-CD, and Alkaline batteries. It has an LED display so that when you first put a battery in the charging bay, you know whether it is viable for charging or simply bad and ready to go back to the recycle box.

Yes it really works, even under solar power.  Read about in this article: How to Recharge Alkaline Batteries. Smith’s PP1 Pocket Pal Multifunction Sharpener: I wrote about this is in the article The Easy Way to Sharpen a Knife Without Spending a Lot of Money. It sharpens everything from pocket knives to kitchen blades. Very portable and easy to use. SE BT20 9-Volt Battery Tester: I do not know anyone that is sorry they purchased or gifted an inexpensive battery tester.  Mine sits in my desk drawer and is used 3 or 4 times a week.

Sex, Birth Control, and Beyond For SHTF

Overall Appearance During SHTF: Tips For Not Standing Out