Fall is soup and stew season and soups and stews are a great way to use up the last of the summer harvest vegetables and to begin using the produce from your fall gardens. Traditional beef stew or even pork stew uses a variety of roots – Potatoes, Carrots, Parsnips, Rutabaga, and even cabbage. In the modern kitchen, you don’t have to adhere to traditional recipes and experimentation is a great tool for use in a kitchen with a home garden. In this article, we take on stews and we add in a variation for using canned beef and pork from Wertz Home Grown Beef and Pork because of its quality and its 25-year shelf life. 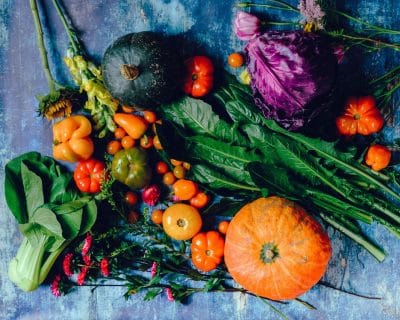 There are three general “tools” used to make great soups and stews. Those are the roux, braising liquid, and the deglazing.

In the pioneering days, great stew started with a roux. A basic roux is two tablespoons of butter with two tablespoons of flour and then you would season this based on the dish. Traditional roux might use animal fats from the cut of meat for the stew instead of butter or might substitute fats such as bacon grease. Roux has two uses –1 – as a thickening agent and 2 – as a base for searing your meat.

The braising liquid becomes the base for your stew and it is something you will have to play around with and adjust to make it your own. It uses the bits of meat and fats along with the remnants of the roux to form a hearty broth. If you were making soup, then this broth would become the liquid in the soup. In a stew; there is not that much liquid which is why stews are thicker than are soups. For a great stew, you only need enough braising broth to soak the meat in as it cooks with the vegetables.

Deglazing is the portion of making the braising liquid where you remove the seared-on bits from the bottom of the pan. In a modern kitchen, the best pot to use for making stew is a well-seasoned dutch oven or a dutch oven that has a ceramic lining. 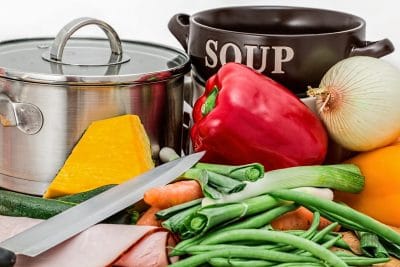 In your dutch oven drizzle in 1-2 tablespoons of olive oil, you can substitute canola oil if you prefer or you can make a ratio of butter to oil also. Heat over medium-high heat. Once the oil is hot, add the floured meat cubes so that you make a single layer. You will need to brown the cubes on all sides which is why you only use make a single layer. This is to hold in the juices from the meat.

Remove the meat once browned on all sides and place on a dish. Add more oil and the next batch of meat if needed. DO NOT clean the pan between browning batches.

Once the meat is all brown turn the heat to high and mix in about 1 cup of wine – red generally goes well with beef – with a few splashes of vinegar – red-wine vinegar works well or you can use white vinegar too. Add the solution to the hot pan and scrape the bottom. Using a wooden turner works best. The goal is to remove all of the cooked-on bits from the bottom and incorporate them into what is essentially the braising liquid.

Once the pan is fairly clean, you add to the wine/vinegar mix 4-5 cups beef broth. For best results, use homemade beef broth or you can use canned. Learning to make your own broth – beef or otherwise – is a good tool for prepping because you may not have access to canned goods. If your dutch oven is shallow, use less broth. If the dutch oven is larger, use more broth. Your goal is to be able to put the meat into the liquid without submerging it.

Add the meat to the liquid, cover the oven and allow the liquid to come to a boil.

Get the Herbs and Vegetables Ready

As the braising liquid comes to a boil cut up 1-2 medium onions. If you love onions use two. You can use a yellow onion, white, onion, or red onion. I encourage you to experiment.

In a small dish add salt and pepper – ½ tsp of pepper and about 1 tsp of salt. You can adjust this later or allow people to add salt at the table.

Once the braising liquid has boiled, add the onion, salt, and pepper to the liquid and reduce the heat. You want to simmer this for about two hours and stir the meat occasionally. 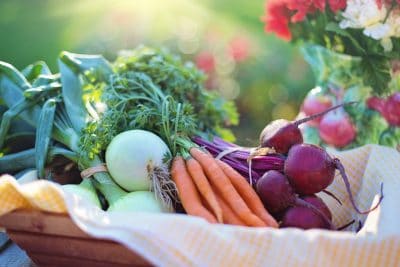 You will need 5-6 medium carrots, 5-medium potatoes – russets work well, 1 rutabaga, 4-5 stalks of celery, 2-3 parsnips, and ½ of a medium cabbage (optional.) Note: root vegetables work really well in stews but you are not limited to roots. You can add in things that you love and try them such as peas, mustards, kale, even squash, and pumpkin. I encourage you to make this your own version.

Herbs – Dried parsley is good. A spring of washed and cleaned rosemary, a single bay leaf can all be added to the mixture when you put in the vegetables. Adjust the herbs to match the meet. So if you are making a seafood stew, maybe tarragon and dill. If you are making a chicken or turkey stew, then sage, oregano, and others can be added.

Chop the celery into bite-sized pieces and add them in the last 15-minutes of cooking. Celery cooks quickly and if you add it too early it turns into a mush. It is also a veg that is full of water so if your stew is thin, add less celery stalk and instead chop up a tablespoon of celery leaves instead.

Stews are chunky and a spoonful should offer easy to chew sizes of foods. So, whatever you are adding to your stew, make it bite-sized.

Add the chopped and cubed vegetables to the meat and braising liquid when the meat is tender. This process usually occurs around the two-hour mark. It may occur earlier or later depending on the heat and the quality of your dutch oven or pot.

Allow the mixture to cook until the vegetables are tender. For a thicker stew, add a roux – 2-tbs of flour mixed with 2 tbsp of butter. You can also add in a boiled potato that is mashed.

Salt and pepper to taste.

You will find a million recipes for traditional beef stew online. I encourage you to experiment with this recipe and fine tune it to make it your own delicious version.

We started this blog with a note about using Wertz Home Grown Canned Beef and Pork and then proceeded to give you a recipe that uses raw meat. The reason for that is simple. Homemade beef stew using raw meat can be canned and preserved. This allows you to take advantage of beef and meat when it is on sale or if you buy it in bulk.

If you are making a beef stew using canned meat, then consider the fine quality meats offered by Wertz. These are GMO-free, grass-fed and sustainably raised beef and hogs.

Adapt the Above Recipe to Canned Meat

When you open a can of Wertz Canned Meat you are getting excellent quality meat. They use the entire cut of meat, not just the chuck which is one of the reasons I love their products. When I spoke to Don Wertz, I learned that most of what he raises goes to the finer restaurants along the Eastern Coast. Those eating establishments require the finest in beef and pork. You are getting that same quality in their canned meat. 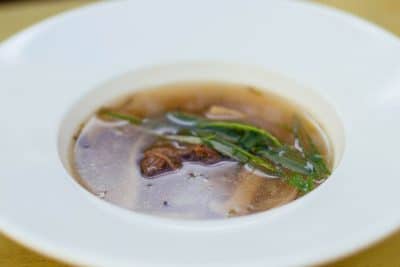 Clearly, you are not going to need to brown the meat or go through that process. So, what you will need to do is create a braising liquid and I have a little trick to dealing with this.

Step 1. Chop all of your vegetables. Keep the potatoes in water to prevent oxidation., open the cans of meat (you will need two 14 oz cans of Wertz Canned Beef

Step 3. Mix a tbsp of flour with 2-3 tablespoons of butter and a dash of salt and pepper.

Step 4. add a tbsp of oil – olive or canola work well – to the dutch oven.

Step 5: Turn the stove on medium and let the oil heat.

Step 6: Dredge the potatoes into the butter, flour mixture and add them to the hot dutch oven. Potatoes like to stick so use your wooden turner to keep them moving. You only want as many potatoes in the pan/pot as you can manage. The goal is to crisp them on one side.

Step 7. Remove the potatoes and set aside.

Step 8: Deglaze – In the pan, add the wine and vinegar and scrape any bits off of the bottom.

Step 9: Use the broth from the canned meat as part of your liquid for your stew and adjust the volume of broth. You will need 4-5 cups of liquid including the wine – Add the liquid to the dutch oven – This is your braising liquid. Note: because of the shorter cooking time less liquid is used. Start with 4-cups total and add more as needed. The reason for this is that there is less evaporation because of the shorter cooking time.

Step 10. Add the carrots, potatoes, and rutabaga to the liquid and bring the mixture to a boil.

Step 11. Reduce the heat to a simmer and allow the roots to cook until they are tender. I prefer that the potatoes break apart when a fork is inserted.

Step 11. Add in the remaining vegetables and the meat. If needed gently cut the canned meat into bite-sized chunks.

Step 12. Cover and cook until all veg are tender.

Step 13. Use a roux to thicken the stew if needed.

How to Grow Herbs in Small Spaces – A Primer

Grinding Wheat with the Incredible WonderMill