There is a poem by Margaret Jang that begins “To know your future, you must know your past”.  And such it is with the events of today and the Great Depression.

The more I learn, the more I want to know because after all, while the PTB and the mainstream media report that the economy is once again growing and things are looking just swell, a walk down Main Street paints a very different picture.  In communities across the country, people are still unemployed (or underemployed), they are still being forced out of their homes, and they are still going hungry.

Books, films, newspaper accounts, and personal journals all contribute to our knowledge of the events that caused the market crash of 1929 and the Great Depression that followed.  I find myself devouring them all so that I can learn and prepare for the hard times ahead.  My favorites, however, are the personal stories from those who lived through it.  To that end, I recently was given permission from Backwoods Home Magazine to share a first-hand recollection of times during the Great Depression. 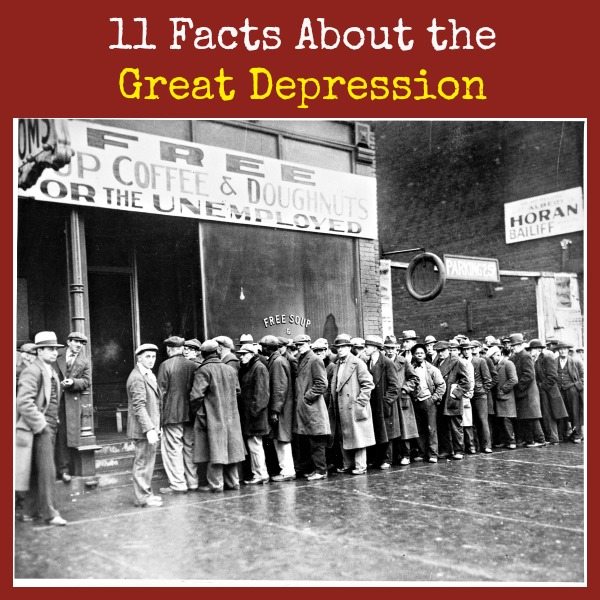 Before I do that, however, here are facts about the Great Depression that we should keep front and center as we move deeper into this next era of economic woes.

11 Facts About the Great Depression

1.  The Great Depression did not happen overnight.

2.  The media created panic and chaos with their sensationalized reports.

4.  Hard work and an enterprising attitude made a bad situation tolerable.

5.  Investing time and energy in gardening and the raising of livestock (chickens and cows) had a huge payback in self-reliance.

6.  Canning and preserving food was important if you wanted food to eat year-round.

7.  The price of everything escalated on an almost daily basis.

8.  Lawlessness was rampant.  In addition to ruthless outlaws, neighbors stole from neighbors everything from food items to livestock to valuables such as jewelry and tools.

9.  In spite of everything, “Robin Hoods” emerged from unexpected places to help feed the people.

10.  Families learned to make do and to enjoy themselves with amusements and hobbies that took little or no money. The following excerpt is from Alice B. Yeager and speaks to a time when things were both tough and good at the same time.

The Great Depression: A Reminiscence

By Alice B. Yeager and James O. Yeager

I was a girl of 8 when the stock market crashed in 1929. It was the Great Depression, and unless you were living during the Depression years, you can’t really understand how tough they were. Our parents knew, however, as they went about trying to raise families under the worst of economic circumstances.

The Great Depression didn’t happen overnight. There is no way you can select a certain day and say that’s when it began. It started coming on sometime during the late 1920s and lasted well into the 1930s. At its peak, approximately 25 percent of American workers were without jobs. Chaos reigned as banks and insurance companies failed. Worst of all, with no bank deposits federally insured, many people lost their savings unless they were among the first to draw their money out of the banks before they closed their doors.

Newspaper headlines didn’t help matters. In New York City and other hard-hit cities, some moneyed and distraught people were jumping from tall buildings and there was an endless list of businesses closing day by day putting more and more people out of work.

Even though my husband, James, and I were children, we were old enough to be aware of The Great Depression and the effect it had on our families and everyone around us. However, let me say from the outset that being in the same boat with many other Americans made it bearable.

We didn’t realize that we were poor as we were all trying to make ends meet and somehow survive.

Click  to read the rest of the article on the Backwoods Home Magazine website. Used with permission.

Part of my responsibility here at Backdoor Survival is to seek out information that will help us prepare and to cope with hard times ahead.  In doing so, I try to keep in mind that all is not doom and gloom.  To quote Alice:

“The Great Depression was not all doom and gloom. There were good times, too. Many of us enjoyed going to our favorite fishing holes not only for the outing, but the fish helped to stretch our food budgets. We had very few concrete swimming pools, so we swam in unpolluted creeks and rivers.

Folks were more inclined to gather and play games like checkers, dominoes, and card games. Churches had better attendance than now. Children weren’t encouraged to grow up so fast. They played hopscotch, jumped rope, twirled tops, and did tricks with yo-yos. Older boys and girls played basketball, baseball, softball, skated, etc. There was more physical activity then than playing computer games today, and obesity was not a nationwide problem.

And, so it went. Ordinary Americans managing to get through tough times.”

Bargain Bin: There are many basic supplies in a survival kit that are inexpensive. Below you will find a list of some of these items. Most are less than $20 and many are less than $10. Take a look – do you have these items set aside for an emergency?

Blocklite Ultra Bright 9V LED Flashlight: One of my readers (James) claims that these work great. So I bought one and it works great!  There is a similar flashlight called the Pak-Lite (which is more expensive) but it does not have a high-low switch like this one.

Emergency Mylar Thermal Blankets (Pack of 10): You will be surprised at how warm these will keep you. Be sure to test one out in advance so that you have the confidence to trust the blanket in an emergency.

Emergency Shelter Tent: The Emergency Tent is a lightweight and compact emergency shelter. It is wind and waterproof and easy to set up and is roomy enough for two people.

Emergency Sleeping Bag: Another low cost item designed to keep you warm in an emergency situation.

Rothco Type III Commercial Paracord: You can get 100 feet of Paracord for very affordably. This is a real bargain but be aware that price can vary substantially depending on the color.  Also, I wrote a very popular article – 44 Really Cool Uses of Paracord for Survival – be sure to check it out.

UCO Stormproof Matches, twin pack (50 matches): This is another one of those items most people forget about. Each match burns for about 15 seconds even if it is windy, rainy, or cold.

Preparedness Tips for the Deaf and Hard of Hearing

26 Responses to “11 Facts About the Great Depression”