I will never forget the look on the COO’s face.

“Lock it down,” was what he said, and I headed to HR to assure the announcement went out. This was our first official lockdown and it was my first at the helm as safety manager. You know, being a safety manager is one of those jobs where you take your day to day very seriously but most of the people wonder what you do and why you are there getting paid.

Still, when we found out there was an active shooter incident nearby, for the safety of our organization and its employees we took action.

The Employee Response to Workplace Preparedness

As I walked the halls of my workplace, coworkers asked a lot of questions. The response from nearly 50 people I saw and spoke to during the lockdown was very interesting. Some were visibly scared and sat in their offices staring off.

We did not initiate a total lockdown that would have forced people to close their doors and cubicle workers to find their “buddy” office. Instead, we stopped all travel between buildings, assured everyone was inside and closed and locked all entryways.

Others were downright rebellious about the situation. They said things like:

“I don’t understand the need for all this.”

I wasn’t sure if this was a denial of their fear or if they just didn’t like the idea of someone forcing them into a lockdown scenario. Didn’t matter to me at the time. I had a warehouse staff to worry about and they were the ones who would be outside driving forklifts with a shooter in the area. 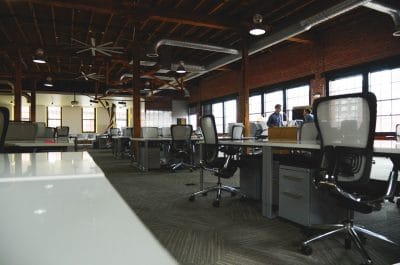 “I can’t believe we are dealing with something like this.”

Before the lockdown, the COO and I sat in his office and watched the breaking news. We watched the events unfold and found out that the shooter was spotted at a local business less than a mile from us. While a shooter venturing into a new business and shooting up more people wasn’t usually the motive, we were both very nervous.

“This is so ridiculous, that we even have to worry about this. This day and age!”

It was sad. There was no way of describing his emotions outside of utter disappointment. He was not scared, he was not nervous, he was disappointed in the world around him. It was as though his child had done something terrible and he was questioning his own actions.

Me, I was terribly nervous and scared. I was scared that I might fall short today and it could get someone hurt.

Do you personally prepare for workplace incidents?

Outside of workplace preparedness, I use the three-tier theory to assure that I could get home under any circumstance. This is a method or theory shared by many and is a very effective way to deal with a disaster at work, on a personal level.

Escape is a powerful word, but it could be the right word depending on the situation at work. In most cases, you want to have an EDC on your person that allows you to address issues brought on by a disaster and to get to your next tier.

If you are dealing with a power outage, it makes sense to have an EDC that involves a flashlight. Its never a bad idea to have a knife and a multitool on hand, as well.

Some people go as far as to carry a trauma kit strapped to their ankle. This could be for themselves or for others. You want to be as effective as possible, in the guidelines of your workplace code of conduct and rules.

From here you find your way to Tier Two

Upon leaving work, safely. You are going to be faced with two options:

the first is to hop in your car and drive home. However, what if something happened to your car in the disaster or happened to the roads? What if there is something perilous, like a massive riot between you and your home.

Things might change drastically, in this situation you reach for option number two, the get home bag. My get home bag only leaves my car to be QA’d for things like foods and additions or removal of certain gear based on need. Now, a get home bag doesn’t have to be a 70L hiking bag. It should be the things you need to get home.

The reality of taking action in a disaster is that you need everyone home first. You are pretty much crippled if you don’t have the family at home or if you have not made it home. Using your Tier one and two to make that happen suddenly puts you in the driver’s seat of your emergency action plan.

There is no place that you are more prepared for the next steps than at home with all your preps.

At the end of our lockdown, we went back to work. The shooter was caught by police and was no longer a threat. I am sure many people lamented or joked about the lockdown at their dinner table that night. It wasn’t my smoothest effort as it was my first.

However, it didn’t come as a surprise, once people understood the threat. They weren’t blindsided by this idea of a lockdown in a potential active shooter situation. This was mainly due to the fact that we had done extensive active shooter training with every employee in the company.

It was our goal to assure that all employees understood the importance and breakdown of:

We felt like this was our duty as an employer because these active shooter situations were just not going away. So, we took groups of about 20 and used FEMA’s interactive training module to touch everyone in the company.

I conducted hour-long training sessions that were mostly interactive and fielded as many questions as possible. I’d like to think that the abhorrent and nightmarish fantasies that we all had, were quelled just a bit by the information provided. Suddenly, our people had the answers to this threat.

Whether you know it or not your workplace has a responsibility to you, in terms of emergency response. There are rules and regulations put in place by OSHA to assure that employees are safe in all types of industry.

A standout is the creation of an ERP (Emergency Response Plan) and the subsequent annual training. Were you trained on emergency response this year? Were you given an ERP at onboarding? These are critical questions to ask.

Now, you have to be careful about this sort of thing because you don’t want to come off condescending, but you should have access to the emergency response plan and all employees should be well aware of things like evacuation routes and shelter in place locations.

If that’s not the case, then you need to have a conversation with HR. A healthy conversation that gives your job the benefit of the doubt. Remember, they are not hiding it from you it could be something that was not prioritized by prior regimes or they may be struggling to get the training done in work hours and may not even have the proper staff on hand to conduct it!

Some Workplace Training to Consider

If you speak with HR and they admit to not having a paid safety employee because of the budget, you can tap your Insurance Provider. Most good insurance providers will be happy to come to administer training on all sorts of things including your ERP. Remember, the fewer injuries and accidents you have on site the better it is for them.

Your Effect on Workplace Preparedness Culture

Modern American culture is so divorced from emergency preparedness that it is almost silly. In fact, to be prepared for disasters puts you in a category of paranoid or worse! We have all felt the piercing eyes of someone who thinks your emphasis on prepping is associated with something much more malignant.

Of course, that couldn’t be further from the truth.

When I took on my role in safety and ownership of emergency response, I had to change. I heard about it from people at work. It was great to hear!

Had I not changed I would have been overwhelmed with the burden of guilt for not taking this responsibility more seriously. When you take the culture of safety and security into your hands it’s not a game. Peoples lives can be affected if you fall short.

However, it’s in that ownership that you begin to affect the culture. You talk about safety and mention the importance of emergency response in all aspects of business planning and before long you have others thinking about it as well.

It might seem impossible, but you can have the people of your workplace talking about active shooter response and debating evacuation routes if you talk about it. That’s called the power of suggestion and its an ancient tactic.

Carry the tools, know the words and engage people on the topics and before long you will affect the culture at work.

Practice Makes Perfect in the Workplace

“When I walked over to building 2 there were two guys outside working during the lockdown.”

The COO was telling me not to reprimand but to make me aware. This was our first official lockdown and we had a lot of growing to do. We had a short meeting with several people to discuss where the lockdown worked and where it fell short.

I cannot emphasize the importance of being open to criticism if you take ownership or champion the safety and emergency planning at your workplace. There are always going to be people who complain. If you can enter into a dialogue and discuss improvements, then have the resources to make those improvements, its about as close to heaven as you can get.

Just know that the safety and security of your workplace is both the responsibility of the people on the ground and those who govern and own the company. It takes everyone and it takes practice.

What I hope to have achieved in this article is a representation of the many levels of workplace preparedness. If you go into work and only blame your employer, you are starting on the wrong foot. Workplace preparedness only really works when employees and employers work in tandem to embrace a culture of preparedness.

What really helps this is having strong leaders on the front line and management level that live a prepared lifestyle inside and outside of work. People can smell the real deal. It’s like Ernest Hemingway said: “The truth has a certain ring to it.”

If you so desire, you can be one of those leaders and trust me, if you are visiting us at Backdoor Survival, you are the right person for the job.

James Walton is the host of the I AM Liberty Show (www.iamlibertyshow.com) a podcast about 21st-century freedom. He is a freelance writer in the prepping and survival niche and likes to keep a healthy balance between prepping and enjoying life.

Finding The Best Cast Iron Cookware For Your Home

Some Tips for Surviving an Economic Meltdown

3 Responses to “Understanding Workplace Preparedness and Your Role”