Injuries are part and parcel of a long-term survival scenario. Many realize that good boots, gloves, and even protective eyewear will prevent many of these injuries, but few will take action to protect against head injuries.

Most head injuries cause superficial damage and are not life-threatening. Indeed, most amount to only a laceration of the scalp, a black eye, or a painful bump. These wounds, however, can hide damage inside the cranium, the part of the skull that contains the brain.

Injuries that affect the brain are called traumatic brain injuries (TBIs). It’s important for the medic to recognize when trauma to the skull has caused damage that is more than superficial. 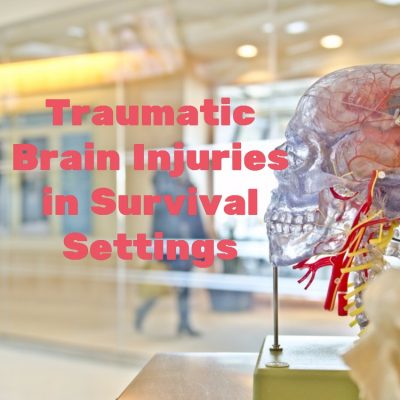 Concussions – The Most Common TBI

Concussions are the most common type of TBI. A concussion is associated with a variety of symptoms that are often immediately apparent. The presentation of a concussion will vary from one individual to the next.

Although you might expect a loss of consciousness, the victim often remains completely alert. As you might imagine, pain at the site of injury or headache is the most commonly seen symptom.

A person with trauma to the head may be knocked unconsciousness for a period of time. In most cases, they will “wake up” in less than 2 minutes, but you can notice them to be “foggy” and behave inappropriately (put me in, coach!). They may not remember the events that led to the injury. This patient will merit close observation for the next 48 hours.

Examine the victim for evidence of superficial injuries and determine that they has normal motor function. This includes making sure they can move all their extremities with full range and strength. Even so, rest is prescribed for the remainder of the day. When your patient goes to bed, it will be appropriate to awaken them every two or three hours to make sure that they are easily aroused. In most cases, a concussion causes no permanent damage unless there are multiple episodes of head trauma over time, as in the case of, say, boxers.

It should be noted that a physical strike to the head is not necessary to suffer a concussion. A particularly jarring football tackle or the violent shaking of an infant can cause a concussion or worse traumatic brain injury. This is because the brain “bounces” against the walls of the cranium. When injury occurs at the site of a blow to the head, it’s called a “coup” injury. Just as often, it can occur on the opposite site of the head, known as a “contrecoup” injury.

In many cases, evidence of direct trauma to the skull is visible. An “open” head injury means that the skull has been penetrated with possible exposure of the brain tissue. If the skull is not fractured, it is referred to as a “closed” injury. An indentation of the skull is clear evidence of a fracture and the outlook may be grim, due to the likelihood of bleeding or swelling in the brain. A closed injury may still become life-threatening for the same reasons.

The brain requires blood and oxygen to function normally. An injury which causes bleeding or swelling inside the skull will increase the intracranial pressure. This causes the heart to work harder to get blood and oxygen into the brain. Blood accumulation (known as a hematoma”) could occur within the brain tissue itself, or between the layers of tissue covering the brain.

Without adequate circulation, brain function ceases. Pressure that is high enough could actually cause a portion of the brain to push downward through the base of the skull. This is known as a “brain herniation” and, without modern medical care, will almost invariably lead to death

Signs and Symptoms of Serious TBI

There are a number of signs and symptoms which might identify those patients that have a serious TBI. Besides an obvious indentation in the skull, they include:

If the period of unconsciousness is over 10 minutes in length, you must suspect the possibility of significant injury. Vital signs such as pulse, respiration rate, and blood pressure should be monitored closely. The patient’s head should be immobilized, and attention should be given to the neck and spine, in case they are also damaged. Verify that the airway is clear and breathing is regular. In a collapse, this person is in a life-threatening situation that will have few curative options if consciousness is not regained.

Other signs of a traumatic brain injury are the appearance of bruising behind the ears (Battle’s sign) or around the eyes (raccoon sign). These signs may occur despite the point of impact being elsewhere. Presence of Raccoon or Battle sign suggests a fracture with internal bleeding. Bleeding from the ear itself or nose without direct trauma to those areas is another indication. The fluid that drains out may be clear, usually representing leakage of spinal fluid.

In addition, intracranial bleeding may cause pressure that compresses nerves that lead to the pupils. In this case, you will notice that your unconscious patient has one pupil more dilated than the other.

Luckily, most head injuries will be minor and the effects temporary. Major traumatic brain injuries will be difficult for the survival medic to effectively treat, just one of the hard realities that face the caregiver in long-term survival.

How to Have a DIY Body Detox at Home