Last year when I read Kyle Pratt’s “Through Many Fires”, I could not put it down.  In that book, nuclear terrorism destroys a number of American cities and chaos prevails.  A familiar story, perhaps, but written in such an engaging and thought-provoking manner that I anxiously awaited the sequel. With that introduction, today I share the next author interview and book giveaway in the Backdoor Survival Prepper Book Festival 8.

Kyle Pratt, the author of A Time to Endure, is back with book #2 in his “Strengthen What Remains” series.  He has some answers to the encore interview questions and is generously offering a copy of his book to ten lucky readers. 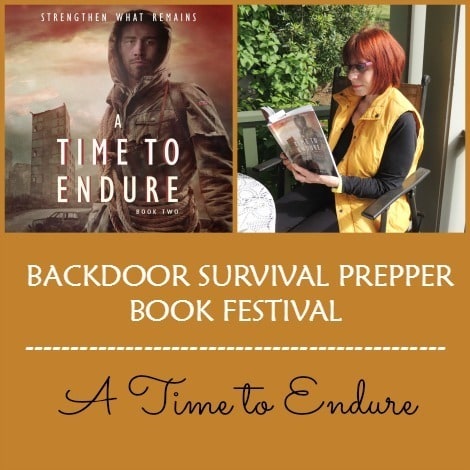 You read that right. This is a mega giveaway for your choice of a print book, eBook, or audiobook.  There will be ten winners! Enjoy the interview then be sure to check in below to learn about the giveaway.

An Interview with Kyle Pratt, Author of A Time to Endure

Given your background, knowledge and experience, what do you feel are the three most important survival or prepping skills?

For the last twelve years my background and experience have been on a small farm so, from that perspective here are my three most important survival skills.

1. Farming: The knowledge and ability to raise your own food. When we moved to the farm we started growing a large garden and planted an orchard. The first year most of the fruit trees died and the garden produced very little. That went on for several years. We learned later that it is not uncommon for it to take several years to learn how to grow food. Years ago small scale farming was a life skills taught to children as they grew. Today it is not. It took us about five years to get good at it. Thankfully, no disasters occurred while we learned. 2. Canning: Harvesting food in the fall is great, but knowing how to preserve it through the long winter is vital to survival. As a child, I can remember my grandmother canning food from her garden. My wife learned this skill only after we moved to the farm. 3. Gun skills: The ability to aim, fire, clean and repair a weapon and reload the ammunition. If you have both one and two above, you are going to need this skill in a survival situation. Of course there are many other skills that are important, first aid, outdoor survival skills, amateur radio, engine repair and more, but you asked for three.

Well, assuming that I had ample food and water, but then was given $500 for preparedness supplies, I would use the money to fill a go-bag. I’ve probably spent more on my go-bag, but $500 dollars would go a long way toward a good one.

I don’t think you can ever be totally prepared. Preparedness is like learning. Hopefully each day we learn more, but you can never arrive at “totally learned.” However, I also feel that preparedness is like insurance. How much is enough? My wife and I store food, we have a well with both an electric and hand pump and an electric generator. We have an orchard, chickens, etc. Is that enough? I don’t know, but I don’t worry about it either. I just try to be prepared. I have two concerns. The first is a virus, either natural or manmade, like the 1918 flu pandemic. We will have another pandemic and there is little that can be done to prepare for it. The other concern is an electromagnetic pulse (EMP) attack. Nations like Russia and China already have the capability to destroy our electric grid with an EMP attack. Rogue states such as North Korea and Iran are close to development of the technology. I fear that one of these nations will strike or give the technology to a terrorist group.

To what extent does your family participate in your personal preparedness efforts?

My wife and two sons (now grown and living on their own) all see the value of, and participate in, prepping in different ways. My wife does the canning, much of the gardening and takes care of the chickens. I take care of the bees and maintain equipment, fences and repairs. One of my sons was an army medic so he helps with first aid supplies and ideas. My sons and I all know how to handle weapons. In an emergency my sons know to gather the supplies they have, get more if possible, and come to the farm.

What is your favorite survival or prepping book? (It can be fiction or non-fiction.)

During my teen years I read, The Earth Abides, by George Stewart. That book has remained one of my favorites. Another is Alas Babylon, by Pat Frank. Later I read On the Beach and Lucifer’s Hammer. More recent favorites include One Second After by William Forstchen and Lights Out by David Crawford.

What about your favorite movie?

I had to ponder this for several minutes. I think my favorite is Deep Impact, about a comet headed toward Earth. Part of it does impact, hence the title. Other favorite movies include Contagion, about a viral pandemic and both Red Dawn films.

If you enjoyed Through Many Fires and A Time to Endure, I’m writing two short stories and a third novel in the series. Visit my website at //www.kylepratt.me and signup for the free newsletter to be among the first to know when they are released.

a Rafflecopter giveaway The deadline is 6:00 PM Pacific next Tuesday with the winner notified by email and announced on the Rafflecopter in the article.  Please note that the winner must claim their book within 48 hours or an alternate will be selected.

At some point you might be scratching your head and thinking, how the heck does Gaye read all of these books?  One a week?  Holy moly! The truth of the matter is that sometimes I read just a few chapters and other times I do a quick skim.  After all, I do need to preview these books to ensure they are suitable to Backdoor Survival readers.  A few, however, I read cover to cover, or if I can, listen via audiobook. Kyle’s books are the cover-to-cover type.  I know you will enjoy both Through Many Fires and A Time to Endure.  Just don’t blame me if you are sleepy the next the day for staying up to all hours reading!  One other thing.  Kyle’s books are some of the most reasonably priced books in the post-apocalyptic genre.  As of this writing, Through Many Fires is for the Kindle version. Something to keep in mind as you are filling up your shopping cart. That said, I encourage you to enter the giveaway.  With ten books up for grabs, you just might be a winner! Enjoy your next adventure through common sense and thoughtful preparation! Gaye If you enjoyed this article, consider voting for Backdoor Survival daily at Top Prepper Websites!  In addition, SUBSCRIBE to email updates  and receive a free, downloadable copy of my e-book The Emergency Food Buyer’s Guide. Spotlight:  A Time to Endure (Strengthen What Remains)

The exciting saga of Major Caden Westmore continues with A Time to Endure.  In the first book Through Many Fires: Strengthen What Remains, nuclear terrorism destroys six American cities. Caden struggles to get home across a stricken, terrified nation.

In the second book, A Time to Endure, the nation’s economy teeters on the verge of collapse. The dollar plunges, inflation runs rampant, and the next civil war threatens to decimate the wounded country. In the face of tyranny, panic, and growing hunger, Caden struggles to keep his family and town together. But how can he save his community when the nation is collapsing around it?

Tools for Survival: What You Need to Survive When You’re on Your Own The Organic Canner The NEW 2000-Hour Flashlight The Garden Pool – Feed Your Family From Your Backyard Ecosystem Survival Savvy Family: How to Be Your Best During the Absolute Worst Doctor Prepper’s Making the Best of Basics Family Preparedness Handbook – Version 12.5 The Prepper’s Financial Guide Saving Jimani: Life and Death in the Haiti Earthquake The Age of Earthquakes: A Guide to the Extreme Present Practical Prepping: No Apocalypse Required: An Everyday Approach to Disaster Preparedness

After the Crumble (Volume 1) A Time to Endure (Strengthen What Remains) Aftermath: A Story of Survival Resurrecting Home: A Novel (The Survivalist Series) Game Changer

Prepper Book Festival 14: Books to Learn, Prepare, and Be Ready for Anything

82 Responses to “Prepper Book Festival 8: A Time to Endure”