During these days of extreme terrorist, crazy politics and uncertainties relative to government control,  it is easy to lose track of some of the threats we initially prepared for.  Case in point is a nuclear threat.  Although it is difficult to separate nuclear threats from terrorism, the recent spate of events has been focused upon shootings and suicide bombs.  That said, threats of nuclear sabotage has been around since WW II, and if anything, it has only gotten worse.

With that introduction, today I present The Winter Fortress: The Epic Mission to Sabotage Hitler’s Atomic Bomb, a piece of non-fiction that is gong to rock you off your chair.  Written by acclaimed author Neal Bascomb, this is a story of spies, commandoes, courage, sacrifice, and ultimately survival. 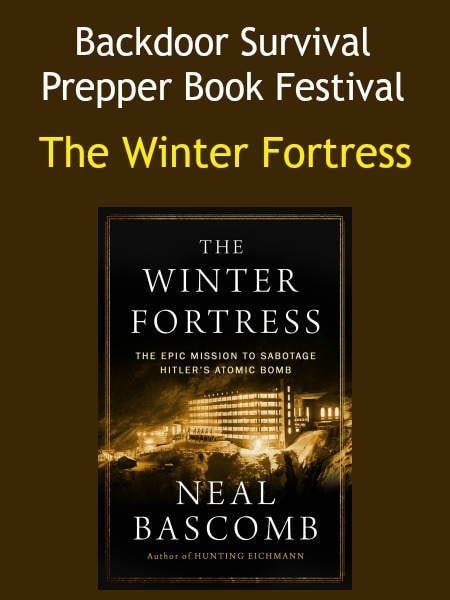 While reading Winter Fortress, you will find the lines between fact and fiction running together, since indeed, as the tale unfolds, there is both . As evidence, to support the story line there are copies of actual photos of the mission to stop Hitler from creating a atomic bomb – even though he had the means and the technology.

What a great read for preppers who are ready to take a break from their normal reading fare!

Neal is here today to respond to a round of book festival questions and is offering five copies of his book to lucky readers,  Enjoy the interview then be sure to check in below to learn about the giveaway.

An Interview with Neal Bascomb, Author of The Winter Fortress.

Tell me about your book. What is it about?

At the height of World War II, a brilliant Norwegian scientist and ten commandos set out to eliminate Hitler’s chance of securing a nuclear bomb. Many call their mission the greatest act of wartime sabotage in history. There’s little doubt it was one of the most daring and inventive, with chest-thumping moments of survival and escape at every turn.

This is a story about heroes, who survived months in one of the most inhospitable places on Earth, scaled 500-foot icy cliffs in the pitch-dark of a wintry night, infiltrated a fortress guarded by scores of Nazis, eluded a countrywide manhunt, risked life and limb and family, and finally gambled one last mission against great odds.

These were not men of steel. Rather, they were flesh-and-blood heroes, who, in truth, were not much older than boys, who had troubling doubts and fears, who made mistakes, who suffered from their failings and loss of faith, yet came through in the end.

I spent months in Norway, both in Oslo and Vemork, combing through archives, conducting interviews, visiting the factory—even learning to cross-country ski and fire World War II weapons.

For several nights, I stayed in the kind of old hunting cabins where the saboteurs lived for months at a time. I hiked the Hardangervidda. I even, dare I say, wore some hand-me-down long underwear of one of the saboteurs on a skiing expedition near Lake Møs.

I uncovered numerous documents that have never before been seen that fill in many of the details of these events. Further, I lived in London for a summer to make my way through the vast papers of the British SOE and War Departments.

Roughly three years. Two were spent researching, then another to write the book.

Every book, fiction and non-fiction, includes a message. What message do you hope my readers will take with them after reading your book?

From the start, I thought this was a story of action: commandos parachuting into enemy-held territory, a perilous attack on a highly-secured compound. In some ways, a historical version of the kind of operation that Navy SEALS are often heralded for executing.

Yes, there are definitely moments of such high drama, but the narrative is much more character focused than I suspected it would be.

This is really a tale about how a ragtag group of soldiers survive together in the wild for months at a time. How do they maintain their cohesion and morale? How do they persist in one of the most inhospitable places on Earth. It’s a fascinating study of character and teamwork. These individuals who stopped Hitler’s bomb had moments of doubt and indecision. Sometimes they didn’t think they were up to the task. They were not unalloyed heroes, but together they managed to pull off the greatest act of sabotage of World War II.

A national award-winning and New York Times bestselling author, I have written a number of books, all non-fiction narratives, all focused on inspiring stories of adventure or achievement. My work has been translated into over 18 languages, featured in several documentaries, and optioned for major film and television projects.

Born in Colorado and raised in St. Louis, I am a product of public school and lots of time playing hockey. I earned a double degree in Economics and English Literature at Miami University (Ohio), lived in Europe for several years as a journalist (London, Dublin, and Paris), and worked as an editor at St. Martin’s Press (New York).

In 2000, I started writing books full time. An avid hiker, skier, and coffee drinker, I am happily settled in Seattle, Washington with my family.

As an author in the survival, prepping, self-sufficiency or homesteading niche, what are you personally preparing for?

My hometown Seattle sits within close proximity to Mount Rainier (still an active volcano) and a major earthquake fault line that could have dramatic consequences for the city. My preparations involve readying my family to survive through a week or two cut off from help (essential food/water/communications).

What would be your first prep-step if you were just getting started?

A plan. Develop a list of steps you would take in case of a disaster or the like. From this generate the supplies and actions you’re family would take.

What movie do you think gives the best portrayal of what could happen?

I thought a great deal about the 80’s hit RED DAWN while writing WINTER FORTRESS.

It’s a story of invasion, but also survival in the wild. Preparing for that, the demands it would take, the kind of expertise one would need, reminded me a great deal of the Norwegian heroes in my book—and provides lessons for all of us.

At the moment, I am writing the GRAND ESCAPE, a non-fiction narrative of WWI pilot imprisoned by enemy lines who escape the “Alcatraz” of Germany by digging a tunnel, then trekking for 200 miles to the Dutch border.

On the surface, my choice of subjects is definitely a grab bag.

Architects in a skyscraper war. Running the first four-minute mile. A Russian mutiny on the Black Sea. High School kids building robots. A hunt for a Nazi war criminal. But, if one looks deeper, each of these stories center on individuals who set an almost impossible goal and defy the odds in achieving it.

A long time ago I read a 1920s book called I DARE YOU by William Danforth. It was a very early rah-rah, you can do anything kind of self-help book. In hindsight, many of its tenets are a bit silly, but the book taught me how much we can be moved by stories. Those I tell inspire me—and I hope they inspire others too.

Neal and his publisher have reserved five copies of The Winter Fortress in this latest Book Festival Giveaway.

The deadline is 6:00 PM Pacific Tuesday with the winner notified by email and announced on the Rafflecopter in the article.  Please note that the winners must claim their book within 48 hours or an alternate will be selected.

Note:  This giveaway is only open to individuals with a mailing address in the United States.

Most preppers feel that something dark and ominous is coming.  We don’t know when or even what.  Heck, nothing may happen.

Still, we all know that there will be some silent heroes who risk everything to help ensure our survival. It is for that reason that books of fiction, such as this one, are important.  Perhaps a bit more serious than some, The Winter Fortress is chock full of adventure coupled with it’s tale of ordinary people who do something extraordinary.

Please do take a few moments to enter the giveaway; this is yet another book you will want to read.

For more information about the books in this latest book festival, visit Prepper Book Festival #12: The Best Books to Help You Prepare, Stay Healthy and Be Happy.

It’s 1942 and the Nazis are racing to be the first to build a weapon unlike any known before. They have the physicists, they have the uranium, and now all their plans depend on amassing a single ingredient: heavy water, which is produced in Norway’s Vemork, the lone plant in all the world that makes this rare substance. Under threat of death, Vemork’s engineers push production into overdrive.

For the Allies, the plant must be destroyed. But how would they reach the castle fortress set on a precipitous gorge in one of the coldest, most inhospitable places on Earth?

Based on a trove of top secret documents and never-before-seen diaries and letters of the saboteurs, The Winter Fortress is an arresting chronicle of a brilliant scientist, a band of spies on skies, perilous survival in the wild, sacrifice for one’s country, Gestapo manhunts, soul-crushing setbacks, and a last-minute operation that would end any chance Hitler could obtain the atomic bomb—and alter the course of the war.

Book Festival and Giveaway: An Interview with Conrad Jaeger