Aquaponics is the combination of two food growing methods to make a more sustainable and independent system that has many benefits for a prepper. Hydroponics, or growing plants without soil and aquaculture, or farming aquatic animals, are combined so that the animal waste feeds the plants.

It’s a little more complicated, but first let’s talk about why preppers should learn about aquaponics in the first place. After, all it seems complicated, right? Is it worth it?

Aquaponics is a great solution for producing food in some circumstances where the traditional method of growing food in the soil starting in spring just isn’t going to work for you.

Urban preppers are already familiar with the high risks that their environment places them in during SHTF events. Aquaponics can make up for the lack of available soil, cramped conditions, and even the need for secrecy in the suburbs or city. 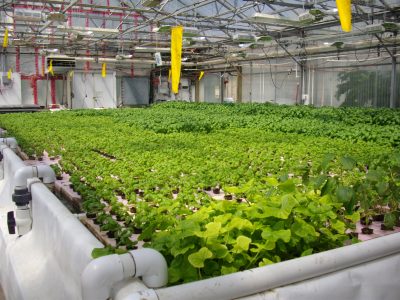 Aquaponics can produce a lot of food per square foot, and protein too which is especially difficult to source in the city. Having your own source of food in your home will prevent you from taking a risk by going outside in volatile times. An aquaponics system can also be easily hidden, keeping dangerous folks from being drawn to your property.

Rural and urban preppers can gain other benefits from an aquaponics system. It doesn’t use soil, so in a situation where the soil is tainted with a chemical or other hazard, you can still produce food with aquaponics.

The soil may also be unusable, or less productive, if pests have developed, perhaps as a result of a SHTF event, or perhaps just out of bad luck. Aquaponics protects you from many pests too.

So, perhaps you’re wondering why anyone would use aquaponics over hydroponics in these situations? Well, with the addition of fish and the bacteria that turn their waste into nutrients for your plants, you don’t need the fertilizer that you’d have to use for hydroponics.

So there’s no stockpiling necessary for this system (although you can stockpile aquaponics specific fertilizer and testing materials to help keep the system running, if you wish). You also don’t need a lot of room to make compost. 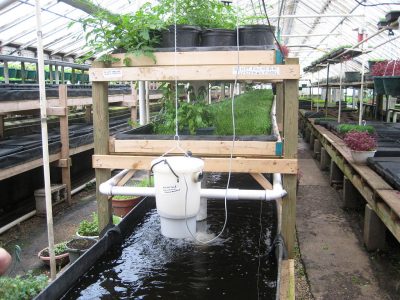 Aquaponics also has the benefit of providing you protein, where the best vegetables for a hydroponics system are not those that give protein. You could grow beans, for example, in a hydroponics system, but they will need more inputs and won’t do as well as the leafy greens that people normally grow in these systems.

The plants still need light to grow, but there are many ways to get them that light. If you have a generator or another source of power you can use lights (specific grow-lights) to sustain your aquaponics system indoors. You can use a skylight or large windows in an urban area. Of course, you can put your system outdoors, but if you do you need to protect the plants and fish from pests and predation.

You’ll be growing the plants in water and keeping the fish in water, of course. You’ll need to have a non-chlorinated method of sterilizing water before you give it to the fish or plants, as the chlorine will harm the bacteria you are relying on to turn the fish waste into plant-ready nutrients.

Aquaponics require a lot of water when you’re starting up, but don’t need to be topped up too often. Research shows that aquaponics uses 90 percent less water than soil gardening.

You need male and female fish in order to keep sustaining your population. 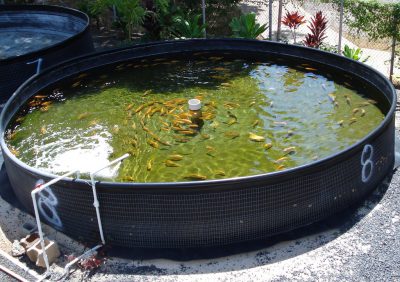 You should also select the breed of fish carefully, some species do better in captivity than others, some are suited for different temperatures (and must have plants which compliment that), and of course, some are more delicious than others.

These fish do exceptionally well in captivity, and many new varieties have been bred to deal with different conditions in various aquaponics systems. 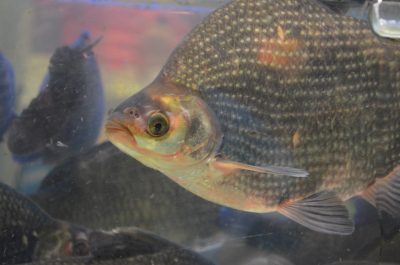 Some can withstand colder water, but if you live in a cold climate you’ll won’t be able to heat the water enough after SHTF to keep these guys alive. Solar power systems have been developed for the pumps though.

Many different varieties of perch ensure that you can find one to suit your projected climate and food source. Most species are very nutritious, grow quickly (not the silver), and are omnivorous. 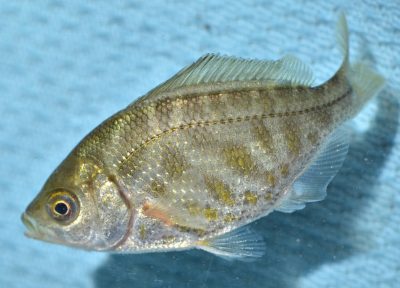 Some, like the silver and yellow, can deal with low temperatures. Perch are good for beginners.

More commercial aquaponics systems use channel catfish than any other fish. This is partly because they grow remarkably quickly and can tolerate heat and cold. 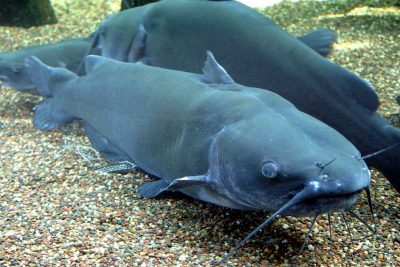 However, channel catfish have no scales so they need to be free from unnecessary handling. When harvesting them, you need to skin them, unlike most other fish.

Trout grow very quickly and prefer cool temperatures. However, they need a very good filtration system and are more sensitive to poor water quality than other fish. 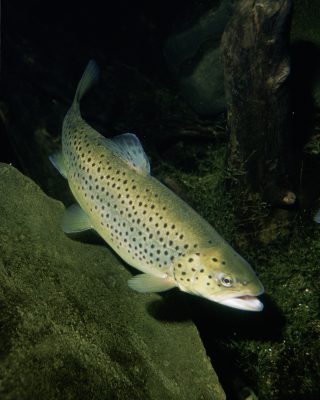 Trout is an ideal for those who already have on aquaponics system up and running.

These fish are not edible, but for those who are only interested in growing vegetables and are not concerned with harvesting fish, these are the easiest and prettiest fish to use. 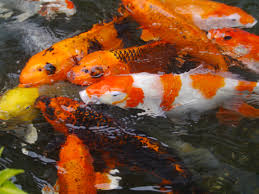 A few tips on choosing your fish:

These bacteria are everywhere, including in the water and air around your aquaponics tanks. Given a small source of ammonia, you could allow the bacteria to naturally develop over a few weeks. Once the bacteria is present you can then add fish.

For speed, and to ensure the right bacteria is cultured, many prefer to buy bacteria starter. You can find it online. When the ammonia is also provided the starter is called cycling material, if not it is just live bacteria. Don’t buy too much– bacteria are living and they will reproduce given time and ammonia. 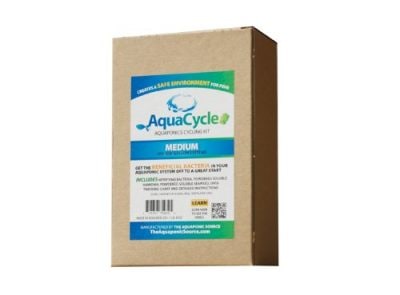 You need plants to grow in your system of course. You should choose plants that need oxygen (ie., aquatic plants won’t work), that you like to eat, and that are suited to your water temperature and target pH. At first, you won’t want plants with large root systems or that have large nutrient requirements, as most systems won’t accommodate either.

Starting with leafy greens is a good idea—they do best. Preppers will also want to consider if their plant can be easily fertilized by hand, because, if indoors, there will be no critters to do it for you. And, getting seed from your own plants will keep the system sustainable in the long term.

6. Containers and other hardware

You’ll also need tanks, pumps, and pipes to keep your system in. You can purchase system from various vendors, or you can find many DIY Hydroponics builds that use relatively simple materials plus an air and water pump.

It’s best to take a look around and see what kind of design would work best for your space. Note that most of the builds use IBCs, or Intermediate Bulk Containers, for tanks.

Shawn Paul has a walk-through of his system here:

I’ve been recommended his e-book on the subject many times, I imagine it would be a great resource for building your system.

I also think Rob Bob’s system is great, he’s a very knowledgeable guy about growing in general. You can see his build here:

One of my other favorite DIY Aquaponics builds is just a garbage can, a simple pump, and a plastic tray for the plants. You can find it at Home Aquaponics System.

You actually need two types of growing mediums in an aquaponics system: one for the plants and another for the bacteria. Neither the bacteria nor the plant roots can just be free floating in water. The bacteria need a material to cling to, like aquarium gravel, sand or even specialized bacteria housing material. 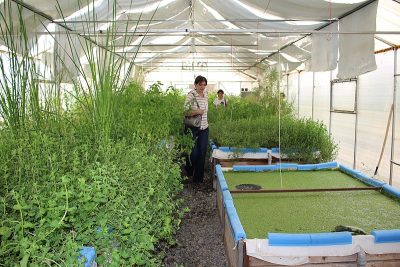 For plant growing medium you can use expanded clay balls (or simply expanded clay), which are very popular but more expensive than other options. Gravel, sphagnum moss, coconut fiber, rockwool are all good options too. Just be careful that your gravel isn’t going to dissolve in the water, and test it to ensure it won’t raise the water’s pH. Technically, you could use dirt with some kind of netting, but it is hard to keep the dirt away from the fish.

Keeping it in Balance

Once you cycled your water, started your seeds and added your fish, what more is there to do to ensure the system works? You need to feed the fish, of course, and watch the water quality to ensure that everything is working in balance together.

At first, you will need to test for pH, ammonia, and hardness. If you’ve selected saltwater fish, you’ll need to test for salinity as well. Generally, you’re going to need to keep checking temperature throughout the system’s life.

As you work out the kinks in your system it will stabilize and things won’t change much unless you make a change—which will keep preppers from relying on purchasing test kits or using up precious energy with electronic testers during SHTF events. 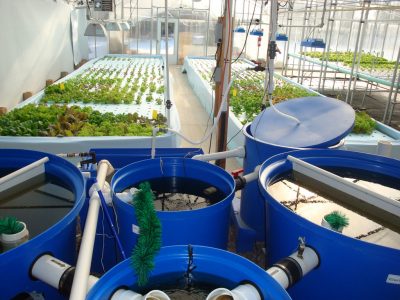 Further, as Urban Aquaponic’s amazing review of testing kits note, the plant’s health will indicate to you if anything is deficient in your system. If you need to add anything, it will probably be iron. Unless, that is, you’re trying to grow nutrient-hungry plants like tomatoes or root veggies.

For more information on testing, check out the CTSA’s analysis here.

Aquaponics is a relatively new field, where new ideas and start-ups are changing the game (or trying to) all the time. It’s definitely something to keep an eye on, even if it doesn’t fit your needs for prepping right now, it may in the future.

How To Deal When Someone Says “If Anything Happens, I’m Coming To Your House”

How To Survive an Ice Storm

The Pros and Cons of Being a Suburban Prepper

2 Responses to “The Prepper’s Guide to Aquaponics: Urban and Soil-less Food for When SHTF”