I am jumping the gun a day early again this week with the next author interview and giveaway in the Backdoor Survival Book Festival 7.

L. Michael Ruskin, the author of Avalon: The Retreat and Avalon: Beyond the Retreat is a here to answer the initial round of Book Festival questions and to award one lucky reader with a copy of his two books. 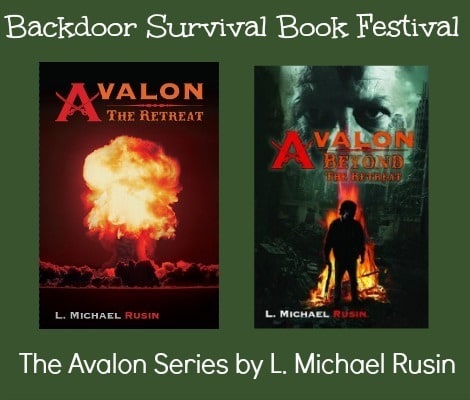 An Interview with L. Michael Rusin, Author of The Avalon Series

1. Tell me about your book, Avalon The Retreat:

Avalon: The Retreat is about a small group of people who have a retreat they relocate to after terrorists detonate nuclear bombs in two major U.S. cities.

As the world tumbles into chaos, they ensure their survival by relying on the skills and supplies they have spent the past six years accumulating.  In the process, biker gangs rise up and are defeated by the group in a all-out war of good versus evil.

My novel Avalon The Retreat was the culmination of a 35 year project. I wrote the book initially more than 35 years ago when I was conducting a class in survival, which I taught to airplane pilots flying in Alaska. During this period, the North Slope airlift was ongoing. Throughout that time there was an airplane in the air coming and going to either point Barrow, Alaska or to Fairbanks, Alaska, 24 hours a day. The airplanes were spaced about 45 minutes apart.

On a weekly basis a plane and crew would go down. Many times, those crewmen were never recovered. It was my intent to impart enough basic information to those people as I could, to enable them to survive the brutal conditions up there. Each time a crew finished a basic survival course, I would give them one of my books. It was a self published book by a company that no longer exist.

My initial book was more about the survival techniques an individual might use to set up a camp site, build a small protective shelter, start a trap line, look for firewood and start a fire with it and finally, to melt snow or to secure a means of having a water supply. It was my thought at the time that most of those pilots could survive if they didn’t panic or give up hope of their rescue. Included in the course was a few simple procedures to signal airplanes passing over them.

Many years later I went through the metal notes in my mind and decided to rewrite my book. This time I wasn’t teaching a survival course per se and I wanted to emphasize the need for a safe place to go in case things changed and required a refuge where people can go to and whether out a storm.

As I wrote the first book, my most important criteria was to write a survival book, wrapped around an interesting story so as not to read like a textbook on survival.

2. What type of research did you have to do while writing your book?

The majority of the research I did was in my mind already. I reached into my storage banks and pulled it out as I was writing the book.

I had to justify certain things such as the state of the economy in the world currently, the saber rattling that is going on presently with the Russians and the Chinese and the mindsets of many current day Americans who think they are ready for a world changing event that might happen at any moment, but in all likelihood, they are not ready for any of it.

In order to make the storyline more plausible, I decided to base it on two events, the possibility of a nuclear attack on the US by terrorists and later, a nuclear war by other countries against the US.

If you look at what is been happening on the world stage lately, my scenario might not be far off in terms of this actually happening.

3. How long did it take to write your book?

I wrote Avalon The Retreat in about 90 days. Of course the editing and other pertinent editorial items was done later, and it took as long to edit the book as it did to write it initially.

4. Every book, fiction and non-fiction, includes a message. What message do you hope my readers will take from Avalon The Retreat?

My message is this: get your house in order and don’t delay in getting it done.

Also, I encourage people to find a place they can stock up with the items that are necessary to survive long-term and also to group up with enough people to make it a viable enterprise. It is where you and your loved ones and friends can survive what might be in the process of happening out there at this very moment.

The world is a very fragile sphere, anything can happen, and it any given moment. A train derails loaded with hazardous chemicals, an earthquake can manifest itself and then followed by this, a monsters Tsunamis.

These things happen daily all over the world, the best any of us can do is be prepared for them if we want to survive and why wouldn’t you want to?

5. Can you tell us a little bit more about yourself?

I’m currently retired and live with my wife in Costa Rica Central America. I’m a veteran and  moved here 15 years ago because I like the weather, and the laid-back lifestyle one enjoys living in a tropical paradise. I enjoy going to the beach with my dogs, love to shoot arrows with my bow, have two greenhouses that I grow food in, and what I can’t eat or sell, I donate to an orphanage.

I have been a practicing survivalist for many years, in fact, for at least 40 years. It is my fervent belief that even if nothing happens we should still have those necessary things available to us to ensure that no matter what happens, we will survive. Surviving with dignity is in my humble opinion where it’s at.

I was once an active airplane pilot, with many thousands of hours as pilot in command behind me, and although I no longer fly, I have great memories of the many years that I was an active pilot. I’ve been married to the same woman for 45 years, and I believe with all my heart that relationship has been one of the cornerstones of my life. I’m an old, grandfather, as well as a father. Although I had a very busy life, the pace is a lot slower and very satisfying.

I also enjoy writing books, which I will continue to do until I am no longer able to.

6. As an author in the survival, prepping and/or home study’s niche, what are you personally preparing for?

My preparations are for any contingency that might occur. It doesn’t matter if the world bombs itself into insensibility, or a plague wipes out mankind.

All any of us can ever do is prepare to be the most skillful we can, and hope for the best. We can spend a lifetime getting prepared for most eventualities, and in spite of our best efforts, we might fall off a ladder to get struck by lightning, and die. But that’s life is in it, we all die sooner or later?

I don’t worry about dying, it’s inevitable. I just concentrate on living life to the fullest while I’m able to.

7. Do you have plans for another book?

I am currently in the process of writing the third book in the Avalon series. It will be called Avalon-Wormwood.

I will do my best to touch on the subject of rebuilding a world almost totally destroyed by the misadventures of mankind. In that third book I would like to paint a picture of what it really could be like to live in a world where peace, tranquility and people working together in harmony with each other and the mother earth. People who live in a world where every life, and every individual is important to everyone.

I would like to take this opportunity to thank everyone who has bought Avalon The Retreat, Beyond Avalon The Retreat, and my latest book California’s Child. I’m gratified and humbled that so many thousands of people have purchased my work and have enjoyed it. There’s no greater feeling than to know people all over the world have accepted what you have written and they tell you how much they enjoyed it.

A copy of Avalon: The Retreat and Avalon: Beyond the Retreat has been reserved for one lucky reader.  To enter the giveaway, you need to utilize the Rafflecopter form below.

If for some reason the Rafflecopter widget is not working, you may also enter here.

You already know that I truly believe that a lot of real-life skills can be gleaned from survival and post-apocalyptic fiction. Having two new books to read and to learn from in the new year with get you off to a good start.

If you enjoyed this article, consider voting for me daily at Top Prepper Websites!

This is a compelling account of how one group of survivalists endures the worst event the world has ever known – a Nuclear World War. It incorporates real survivalist skills to help prepare you for that fateful day when catastrophe strikes.

In the first installment of the Avalon trilogy, there is a great cast of characters recovering from the devastating effects of a nuclear invasion of the United States. Their survival skills and advance preparation demonstrate that there can be survival after holocaust.

In book two of the series, the same great characters move on to the next step, establishing sense and order out of the chaos left behind from two devastating attacks on the United States. While this struggle seems hard enough, there are new and unprecedented challenges. Amoral gangs form. With their mission to rape and pillage the remains of the country and its survivors, incredible acts of human ignominy run rampant.  Add the nightmare of an incurable plague, with all of its consequences, and the going just gets tougher.

Punctuated with poignant personal stories, the Avalon survivors are personalized, and share their fears, hopes, and souls with the readers.

Summer Book Festival and Giveaway: Getting Home by Alex Smith