When you’re out in the wild, there’s always the risk of encountering dangerous animals. Whether it’s a omnivore like a bear, a carnivore like a wolf, or even an herbivore like a moose, wild animal encounters are always a potential threat on the homestead, wilderness bug-out, or even just a run of the mill hike or camping trip.

Thankfully, even predators generally want nothing to do with humans and would much rather avoid us altogether. However, if they are especially hungry, agitated, diseased, or have learned to associate humans with food, they are more likely to engage you. Sometimes, of course, we don’t know exactly why an animal became aggressive in any given case, so it’s important to learn the basics.

Even if you only take a single camping trip, you’ll want to keep at least a few basic items on hand in case of an encounter with an aggressive animal. We’ll outline these first:

Bear spray is basically a highly concentrated, high-velocity form of pepper spray that can be fired further than pepper spray meant for humans. When a bear charges you, it may be the last thing keeping you from being tackled—or worse. It’s affordable and easy to clip onto your gear.

Here’s the Frontiersman Bear Spray with Chest or Belt Holster.

This stuff is a potential life-saver, but is powerful and has definite drawbacks, making it not ideal for every situation. For example, it may backfire if you’re dealing with strong winds, there are trees for the spray to ricochet off of, or if you’re in close quarters like a tent.

Regardless of animals, every hiker and camper should have a good knife—and bring it with them on every trip. Hopefully you never have to use it to defend yourself against a bear or other animal, but with so many practical uses, a versatile knife should be one of the mainstays of every gear load-out.

Like a good knife, rain gear is another basic item that every hiker and camper should have from the get-go. The weather-related reasons are obvious , but when it comes to handling encounters with wild animals, a big rain poncho or jacket has an important use as well. We’ll get into this in more detail in the next section.

What to Do in an Animal Encounter

When an animal is becoming aggressive, it usually displays clear signs. These often include grunting, scratching, hair standing up, scratching the ground with antlers, and “bluff” charges where the animal begins to charge, but then stops short. However, animal may not necessarily show aggression right away. The first step if you see an animal out in the wild is to get it to notice you. 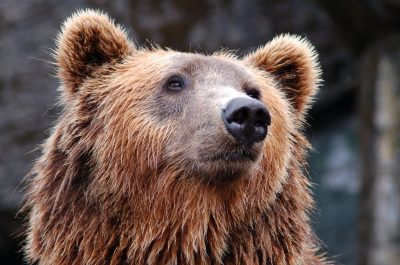 This may seem like the opposite of what you want, but the key is identifying yourself non-threateningly, and never startling the animal. This helps keep the animal calm and helps prevent you from being identified as prey. If an animal has already begun aggressive postures, it is already in an agitated state. When out in the wild you’re also much better off in a group, even a small one, than being alone. Being alone greatly increases the potential likelihood of being targeted for attack.

Obviously you want to make your presence known to the animal from a distance, but may not always have this liberty. If you have a surprise, close-distance encounter, you’re already at the stage where you may have to ready your bear spray and/or knife. Otherwise, follow these steps to get an animal to notice your presence and identify you as a non-threatening human rather than a prey animal:

In the animal kingdom, every encounter is a cold calculation on the part of the animal. Is this strange two-legged thing good prey? Is it a threat to me? How hard will it be to kill? Do I want to find out more about it, or is it not worth my time and risk? 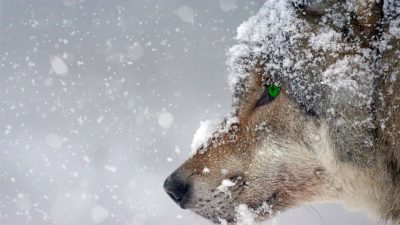 That in mind, when an animal is being aggressive, you want to do things that make the animal say to itself, “Hey, this thing isn’t good prey, and it might be able to hurt me if I mess with it.” That primarily means making appear as large as possible.

That’s where the rain gear comes in. By spreading it out as wide as you can behind yourself, you’re making yourself look enormous to the animal. These things hopefully add up to enough of a perceived threat that the animal decides to leave you alone.

When you’re dealing with a predator like a bear, wolf, or mountain lion, never turn and run away. Predators will be excited by this and take chase, as is their instinct. Despite the urge to run when charged, it’s important to stand your ground.

Since herbivores don’t have the same predator instincts, when it comes to some of these, your best bet is to run to nearby cover if charged. For example, if a bull moose becomes aggressive, fleeing toward nearby cover is your best bet. That means any tree, table, or anything else you can get between yourself and the animals’ enormous antlers, and then hope that it tires itself out or gives up.

In the next section we’ll delve into more tips and strategies for dealing with specific types of animals, and what to do once they’ve already made the unfortunate decision to attack.

You may have heard to play dead in a bear attack. This may be a good option with certain types of bears and situations, but not for others. Therefore, always educate yourself to be sure you can identify both bear types in your area. As a few basic identification tips, grizzlies have a hump on their back and black bears do not. Grizzlies also have shorter, more rounded ears than black bears do.

Never stare any type of bear in the eye, as this will be interpreted as aggressive and may induce a hostile response. Also, regardless of what kind of bear you’re dealing with, certain types of approaches mean that you’ve already been identified as prey and shouldn’t play dead. These include being stalked before being attacked, or being attacked in your tent. In these situations, even if it’s a brown or grizzly bear, instead of playing dead you should attack the bear’s face right away. 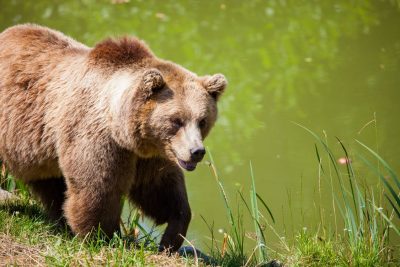 According to the US National Park Service, during encounters with aggressive brown bears or grizzly bears, playing dead is your best good option. However, don’t just go limp. With your pack still on, lie on your stomach, spread your legs to make it harder for the bear to turn you over, and clasp your hands behind your head to protect your head with your arms. If after this the bear continues its attack, your best option is to fight back in any way you can. Try to hit the bear in its face with sticks, fists, knives, with your feet—any way you can.

When it comes to black bears, on the other hand, you want to skip the playing dead stage and go right into attack mode if they have charged you. Scream, look large, swing poles or sticks, and generally use anything you can as a weapon to intimidate the bear and try to strike the bear’s face. In no case should you ever attempt to climb a tree to escape a bear, as they are excellent climbers.

If wolves or coyotes approach you at all, make a lot of loud noise by yelling and hooting while you make yourself appear large. If you have noisemakers like whistles or horns, use them. Use hiking poles, sticks, or anything else you can grab and wave around to look big and use in case you have to fight. Throw rocks at them, if there are rocks nearby that you can easily grab. If you’re in a group, always avoid turning your backs to the animals, and be aware they may be in a pack, attempting to surround you. 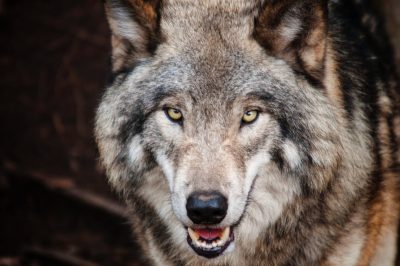 Also unlike bears, canines can’t climb trees, so as a last resort of escape, this may be a good move. The obvious concern is that the wolves simply wait for you to come down, but wait long enough, and they’re likely to go looking for easier targets elsewhere.

Oftentimes, mountain lions will stalk their prey for long distances before making themselves known. Usually you’ll never even know you were being followed, as the lion will mercifully give up the chase before making any further aggressive move. Once they’ve engaged you directly, it’s likely that they’ve already spent a lot of time sizing you up. This means they are probably readying to attack. 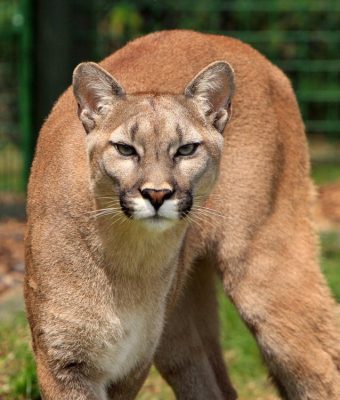 Many of the principles are the same as with canines: make noise, appear large, and back away slowly to start putting distance between you and the mountain lion. By shouting loudly and in distinct words, you may be able to mystify the mountain lion enough to break its predatory spell. You can also bang walking poles and water bottles to make unusual noises.

Overall, with the exception of moving back slowly, do everything you can to avoid appearing afraid. Try to exude a defiant, powerful energy. Unlike with other types of wild animals, during mountain lion encounters you want to make and maintain eye contact. If the mountain lion attacks, protect your throat and try by any means necessary to strike the animal’s face.

When a moose becomes aggressive, it’s usually a male bull during mating season. Regardless of whether a moose is male or female, however, if they become aggressive you should back away and then run. As we touched on earlier, you want to try to get as many sturdy objects between you and the moose as possible: trees, fences, boulders, or anything else that can provide a buffer between you and the moose. 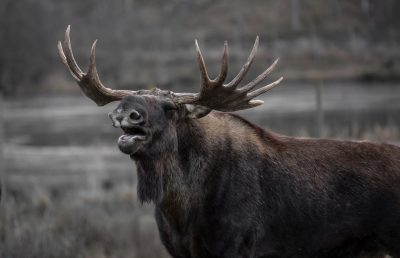 Although they can run over 30 miles per hour, they don’t particularly enjoy it and will only run for short bursts. Moose are lazy, so you can use this to your advantage. If you are unable to get away and the moose is upon you, get on the ground in a tight ball. In all likelihood, the moose will nudge you around and then leave. Just try to be sure the moose has completely left the area before getting back up again.

Thankfully, even when you encounter a potentially dangerous animal in the wild, you’re unlikely to be attacked. However, for homesteaders, campers, hikers, wilderness buffs, and outdoor adventure lovers of all kinds, a wild animal encounter is a situation you’re sure to have to deal with first-hand at some point.

When that time comes, reacting correctly versus incorrectly can mean the difference between an exciting animal sighting and a devastating animal attack. To that end, a little knowledge and equipment will go a long way!

The Grumpy Prepper’s Guide To Surviving The Holidays

How to Have a DIY Body Detox at Home

The Many Uses Of Tarps For Survival and Prepping