When I first wrote about desiccants, the context surrounding the use of desiccants was a mystery to me.  I knew that little pillows of gel were frequently packaged with electronic gizmos, new shoes, pill bottles and even clothing purchased over the internet.  I also knew that many articles, books, and websites with information about long term food storage also talked about desiccants.

As far as my knowledge of desiccants went, I was clueless. What are they?  How are they used?  And were they really necessary?   It seemed that depending upon who you consult, they were absolutely 100% necessary or a total waste of time and money.  Talk about being confused. 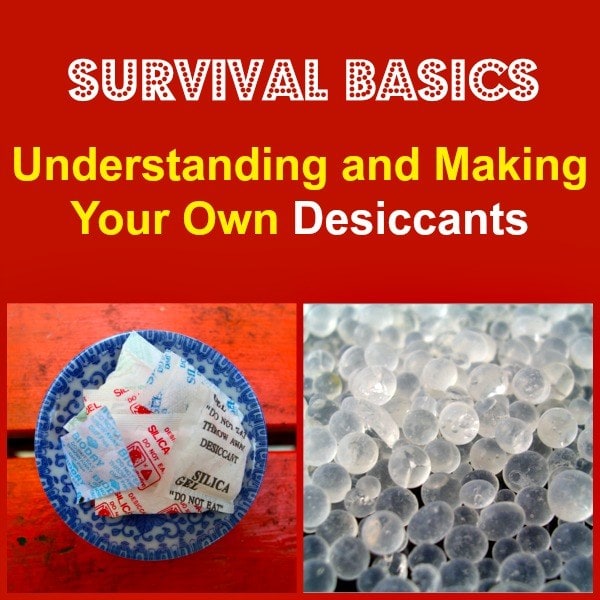 A lot of has changed since then.  I am more educated as is the prepper community as a whole.  I now know that a desiccant is to moisture what an oxygen absorber is to the oxygen in the air.  Sounds simple enough, right?

Three years later, it is time to update what we now know about desiccants and provide you with some easy peasy directions for making your own.  But first, what exactly is a desiccant?

Starting with its most basic definition, a desiccant is a substance that absorbs water. It is most commonly used to remove humidity that would normally degrade or even destroy products sensitive to moisture.

As an oxygen absorber is to air, a desiccant is to moisture. That means items that may be subject to mold and mildew if left unprotected in a damp area will be safe from those nasties if stored with a little pillow or packet of desiccant on board.

There are many types of desiccants.  Wikipedia gives us a lengthy list of desiccants but instead of burdening myself with figuring them out on my own, I asked my friend Ron Brown to share his knowledge of desiccants as well as the results of his experiments using various types of this magical stuff.

Here is some of what he has shared with me.

Some Common and Not So Common Desiccants

Silica Gel:  Silica gel is one of the more common desiccants.  Crafty types use it to dry flowers and in other projects.  As with other desiccants, as water evaporates from the flowers, it’s soaked up by the gel, thus drying them out for posterity.  Packets of silica gel are also found packaged with pills, over the counter remedies and vitamins.  What many people do not know is that these can be reused if you dry them out using low heat in the oven. 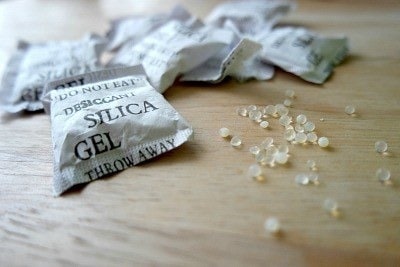 Salt:  Salt is a desiccant. If it cakes in the shaker and won’t come out, that means it’s soaked up moisture from the air and the little grains of salt have glued themselves together. To prevent caking, calcium silicate is added to table salt.

Rice:  Rice is added to salt shakers to keep the salt flowing freely. So if salt is a desiccant, maybe rice is an even stronger desiccant.

Calcium Chloride:  Ron told me that he totally ruined a pair of leather shoes once, spreading calcium chloride with a shovel off the back of a flat-bed truck (to minimize the blowing dust) back in his college-student, summer-job, road-construction days.

Plasterboard or Wallboard:  Ever heard of a Kearney fallout meter?  When building a Kearny fallout meter to detect radiation, Kearney himself said you must have a desiccant in the cell to keep the atmosphere as dry as possible. In his original fallout-meter directions, he tells how to make a homemade desiccant from plasterboard. He recommended a piece of wallboard or plasterboard that has been broken into half-inch cubes and dried in the oven.

Which Desiccant is Right For You?

Now here is where things get interesting. Ron ran some experiments testing various types of desiccants and was kind enough to share the results and a tip for making your own desiccant packets.  Here, in his words, is what he had to say.

So which desiccant is best?

To answer that question, I took one cup each of silica gel, salt, rice, calcium chloride, plaster of Paris, and non-dairy creamer, poured them in separate bowls, then lined the bowls up on a table in the cellar. Relative humidity was in the 65-75% range. I weighed them in the beginning, gross and tare, and at the end of 40 days.

SIDE NOTE:  At the time I conducted this test I was aware that Cresson Kearny recommended against using calcium chloride as a drying agent in a Kearny Fallout Meter. He said, “Do not use calcium chloride” (see page 215 of “Nuclear War Survival Skills” by Cresson H. Kearny).  Pretty straightforward.  But he never said WHY and that puzzled me because calcium chloride is a top-drawer desiccant. Later on, I think I discovered why. After a couple of months in a continuously moist atmosphere, calcium chloride turns to a liquid. What part of “mess” don’t you understand? 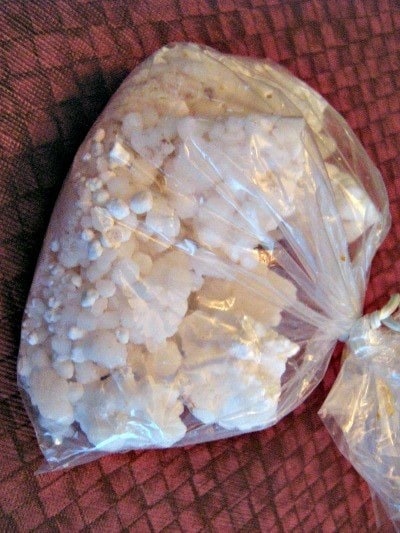 Even so, calcium chloride was the clear winner. Please note that a hard, half-inch thick crust had formed over the surface of the calcium chloride. The crust was almost like concrete, really quite difficult to chip away without breaking the dish.

So where can you buy calcium chloride? One place is in with the canning supplies, sold by Ball as “Pickle Crisp Granules”. It makes the pickles crunchy and is used in commercial dills (Claussen, for example). 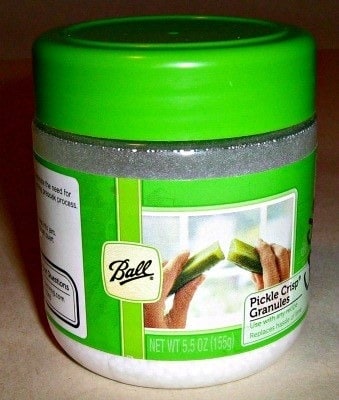 It’s cheaper to buy Morton Safe-T-Power ice melter in plastic cans, 9 lbs. for $5. People use it on their outside steps and sidewalks in winter to melt ice. If you buy pallets of calcium chloride in 50-lb. bags, you can get it for $12 a bag. Tractor-trailer loads are even less.

I put “packets” of desiccant in with my vegetable seeds. 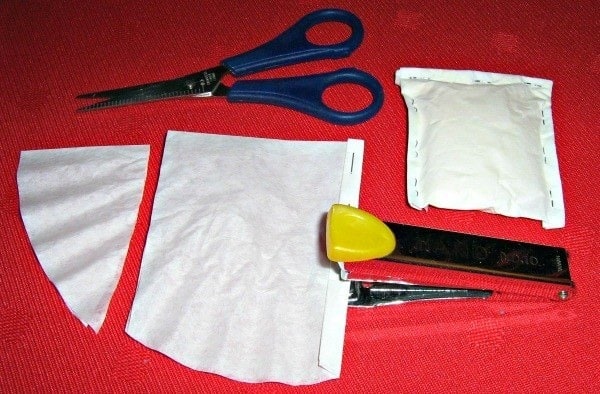 I make the packets from coffee filters (Mr. Coffee-type), cutting, folding, and stapling as necessary. Don’t forget that calcium chloride can potentially double in volume from its original (dry) size. So don’t stuff the packets. More is not better.

Were I to use larger containers – 5-gallon buckets, say, or 30-gallon trash cans – for storing grains, flour, and the like, then I would not use fragile coffee-filter packets. I would use old vitamin bottles or mayonnaise jars (of whatever size seemed appropriate for the task at hand) with many small holes punched in the lid. Jars LABELED with what’s inside, thank you! 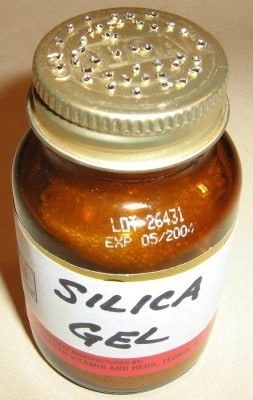 But whatever desiccant you choose and however you use it, it is crucial to the success of your storage program. Crucial, critical, important, essential, indispensable, all that stuff.

But Wait. There is More!

After posting the original article, Ron contacted me and owned up to a mistake.  It is best to let him describe his error/goof in his own words.

OPS! I made a mistake. As difficult as that may be to believe, my wife assures me that such a thing is possible. (But that’s what wives are for, eh?)

In the above comparison, I concluded that silica gel did not absorb enough moisture to measure. Turns out I didn’t use it correctly.

Silica gel contains “indicator” crystals. When blue, the gel is ready to go. When pink, the silica gel is already saturated with water vapor and won’t pick up anything further.

And that’s what I (mistakenly) did in my comparison. I used silica gel that had been setting around for a long time and had pink indicator crystals. After discovering my error, I dried the gel in the oven at 250 F for 45 minutes. The pink crystals turned back to blue and we were ready for business.

Depending on your application, silica gel has a nice feature in that it remains granular, pourable like sand, even when saturated. Calcium chloride cakes into one solid lump.

One really good use of a desiccant is to store one with the vegetable and herb seeds we save at the end of each growing season.  In addition, depending on your climate and packaging techniques, it may not be a bad idea to include a desiccant in with the grains and bulk foods we hope to store for months, years, or even decades. Just know that a desiccant will moderate and maintain the moisture content of stored food; it will not change or alter the moisture content in the food itself.

In closing, I want to thank Ron for his help in educating me relative to the use of desiccants as well as his experiments and methodology for creating DIY desiccant packets.  Who would have guessed that coffee filters and a bit calcium chloride or non-dairy coffee creamer would be so useful?

Finally, I would also like to put in a plug for Ron, who is the author of The New 2000-Hour Flashlight as well as the Non-Electric Lighting Series of print books and eBooks.  Each of his books is chock full of information that is not only useful, but a darn interesting read as well.

Bargain Bin: Thinking of making up your own packets of desiccant?  Here are some of the products that will get you started as well as other links related to this article.

Ball Pickle Crisp 5.5 oz. Jar: You can make up a large batch of desiccant packets with this tub of “pickle crisp” and some coffee filters such as the Brew Rite #4 Cone Coffee Filters.

DampRid Hi-Capacity Moisture Absorber, 4-Pound Tub:  This is Calcium Chloride. This stuff has been used by boaters for years and is a popular item.  Seems to me that a 4-pound tube, used to make desiccant packets, would last forever.

“Dry&Dry” Silica Gel Packets Desiccant Dehumidifiers:  These are 3-gram packets of silica gel.  As a rule of thumb, use 3gm to 5gm per gallon.  Note:  these do not take the place of an Oxygen Absorber.

60 – 300cc Oxygen Absorbers: This is one area where you want to make sure you are getting a quality product.

Nuclear War Survival Skills:  Updated in 2012. this book by Cresson Kearny is based on the Cold War scenario of a major thermonuclear exchange between the Warsaw Pact and NATO. It provides an impressive range of nuclear survival techniques including how to: – Make your own radiation meter – Decide whether to evacuate – Construct your own fallout shelter – Keep your water safe from contamination It also includes detailed plans for six nuclear fallout shelters and two nuclear blast shelters.  It is not as richly illustrated and some of the newer chapters are missing.  Still, free is free.

How To Use A Sharpening Stone

How to Prepare for Nuclear War