Longtime readers of Backdoor Survival need no introduction to my friend Ron Brown. He is the author of the popular Propane for Preppers series and the NEW 2000-Hour Flashlight, a book that teaches how to take a $5 flashlight and MacGyver it so it will operate for 2000 usable hours on a single battery. Now to be honest, originally the 2000-Hour Flashlight book was to featured in Backdoor Survival Prepper Book Festival 8.

But, me being me, I did a switcheroo.  Ron’s series of books on non-electric lighting are so fantastic that I twisted his arm and used positive persuasion tactics to convince him to offer one lucky reader a set of the first five books in the Non-Electric Lighting Series.  And he finally agreed. 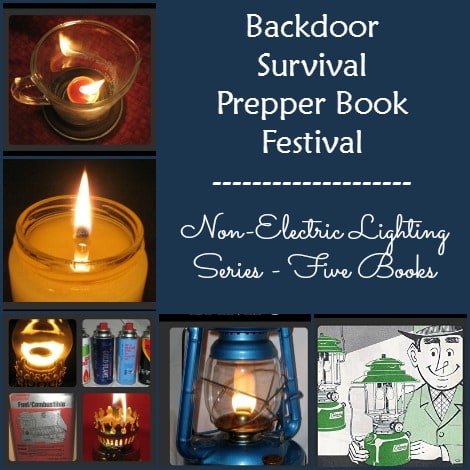 Enjoy the interview with Ron and be sure to enter the giveaway.  It’s a good one!

An Interview with Ron Brown, Author of The Non-Electric Lighting Series and The NEW 2000-Hour Flashlight

Given your background, knowledge and experience, what do you feel are the three most important survival or prepping skills?

Second, you must take care of your health. “All happiness begins with good health,” they say. And that’s true in good times and bad. And third, you need some salable skills. The operative word is salable. Stuff you can carry over an international boundary and they cannot confiscate. Skills that will earn you a living when you get to the other side. How to repair a bicycle. How to grade rare coins. How to sew. How to butcher a cow. How to change an automobile engine. How to hatch eggs. How to make candles. There. See? I WAS able to work that question around to the lighting theme.

Some money would, of course, go towards food. Potatoes, apples, and carrots can be stored in a cold back bedroom. No canning or refrigeration or freezing is necessary. In fact, no COOKING is necessary. Every one of those items can be eaten raw if need be. Rice would be high on the list. It stores forever. I have seen my father-in-law in the Philippines go to work, physical factory work, on a breakfast of cooked rice. A heaping plate of steaming white rice. No side dishes, no meat, no coffee, no salt, no condiments. It was a matter of choice, not necessity. And he was one tough old bird, let me tell you. Forget the MRE’s and the freeze-dried dollar bills. Think RICE. Some money/resources would go into a Geiger counter or the knowledge of how to make a device capable of measuring radiation. If you ever need it, there will be no substitute. This item and/or knowledge is an absolute must-have. Procrastinate at your peril. I’ve seen it suggested that you could load a lot of personal info on a thumb drive (scans of birth certificates and so forth) and carry the thumb drive in your pocket. But how about an SD card (the kind of “chip” that goes in a digital camera) rather than a thumb drive? An SD card is smaller than a thumb drive and PC’s and laptops all have slots to accept them. My SD card holds 32GB although larger sizes are available. You can scan your birth certificate, marriage certificate, house deed, insurance papers, etc., then drag-and-drop the files onto the SD card. Don’t forget a password-protected list of passwords. Picture yourself sitting in a foreign airport needing funds. And you have funds in your brokerage account. You just can’t remember the most recent password. Lastly, load up the card with survival books. “Where There Is No Doctor” and “Nuclear War Survival Skills” by Cresson Kearny. Stuff like that. An EMP-proof method to carry the SD card is to put it in its little plastic case, wrap the case in aluminum foil, and place the wrapped case in a metal Altoids “Smalls” tin. Alternatively, a somewhat sneaky “conceal-carry” method is to put the SD card in your camera. That shouldn’t arouse much suspicion. Everybody carries a camera. Any leftover money would go into tools and camping gear and flashlights and lanterns and other gadgets, your choice.

I do not feel totally prepared. Far from it. The prep area that concerns me the most is my own aging and ultimate demise. I know I can’t stop it. I’m not even sure I can slow it down. I’m 74 and the years just seem to go by faster and faster. You’ll see.

To what extent does your family participate in your personal preparedness efforts?

For the most part, my family equates to my kids. They’re probably closer to my way of thinking than they would like to admit. On the surface they will say, “Oh never mind. It’s just Dad. He’s talking again.” Today they may be college professors and computer programmers and suchlike, but most of them, whether they ever think about it or not, live in the country with a few acres and a vegetable garden just like I do. Just like they were brought up with.

What is your favorite survival or pepping book? (It can be fiction or non-fiction.)

What about your survival favorite movie?

ASIDE: Probably should leave this question out. I’m too busy tinkering in the shop and writing. Rarely see a movie.

Just a personal anecdote you may find amusing. There was a question/test on Facebook a while back to the effect, “Are you right-brained or left-brained?” You may have seen it. It starts with a ballerina balanced on one foot. “Is she rotating clockwise or counterclockwise?” the question asks. Left-brained people are logical. They tend to be engineers (like me). Right-brained people tend to be more creative and intuitive. Halfway through the test, the mouse slipped out of my hand and clattered on the floor and the screen flickered and flashed. So . . . did I just answer the same question twice? Or did I miss a question altogether. I went on and took the rest of the test and it said, “You are 92% right-brained.” Well, that’s ridiculous. So I started over and took the test again, being careful not to drop the mouse this time. And it said, “You are 92% right-brained.” WHAT?!! AM NOT! Am balanced. Balanced I tell you. Am not 92% anything. And, besides, I worked my whole career as an engineer. Machines and numbers and stuff. Am logical! Then again, as I think back over my career . . . even as I think back over my answers to these questions . . . hmm . . .

Gaye’s Note:  Indeed. Ron changed his interview answers a couple of times.  I think he was trying to make sure I was still awake and on my toes.

a Rafflecopter giveaway The deadline is 6:00 PM Pacific next Tuesday with the winner notified by email and announced on the Rafflecopter in the article.  Please note that the winner must claim their book within 48 hours or an alternate will be selected.

Something I did not mention is that I have written for Foreword not only to the 2000-Hour Flashlights book, but also 4 of the 5 books (so far) in the Non-Electric Lighting Series.  They were good enough for my stamp of approval which, as you know, is not always easy to get. Here are the five books in the giveaway.

You can read more about Ron Brown here.  Good luck! Enjoy your next adventure through common sense and thoughtful preparation! Gaye If you enjoyed this article, consider voting for Backdoor Survival daily at Top Prepper Websites!  In addition, SUBSCRIBE to email updates  and receive a free, downloadable copy of my e-book The Emergency Food Buyer’s Guide. Spotlight:  The NEW 2000-Hour Flashlight

The first edition showed how to modify one flashlight, a specific Eveready model, such that it ran 2000 hours on one battery. Unfortunately, Eveready has replaced that particular light with newer models. This edition shows how to obtain extended run times using other brands – one of which runs 2200 hours, better than the original. (Incidentally, 2200 hours equates to three months of continuous running, night and day.) In general, the modifications or “hacks” are accomplished by adding a resistor (30 cents) to a $5 flashlight. Simplicity is the watchword. Wire glue (a glue containing carbon that conducts electricity) can be used in place of solder. Wire glue eliminates soldering and reduces the task from a techie project to Junior High School level. What with floods, hurricanes, tornadoes, tsunamis, typhoons, earthquakes, blizzards, and downed power lines, there’s always a blackout somewhere. If people in general knew the information in this book, life would be a lot easier for a lot of folks.

Tools for Survival: What You Need to Survive When You’re on Your Own The Organic Canner The NEW 2000-Hour Flashlight The Garden Pool – Feed Your Family From Your Backyard Ecosystem Survival Savvy Family: How to Be Your Best During the Absolute Worst Doctor Prepper’s Making the Best of Basics Family Preparedness Handbook – Version 12.5 The Prepper’s Financial Guide Saving Jimani: Life and Death in the Haiti Earthquake The Age of Earthquakes: A Guide to the Extreme Present Practical Prepping: No Apocalypse Required: An Everyday Approach to Disaster Preparedness

After the Crumble (Volume 1) A Time to Endure (Strengthen What Remains) Aftermath: A Story of Survival Resurrecting Home: A Novel (The Survivalist Series) Game Changer