What better way to start off the new “Prepper Book Festival” than with The New 2000 Hour Flashlight?

I say this because, from the get-go, I was part of the feedback team that Ron used to fine tune the technique in the first edition and get it ready for prime time.  Although I don’t know for sure, my guess is that thousands of copies of the original “Flashlights” is out there and likewise, scores of prepper’s have used Ron’s technique to build their own survival flashlight with a usable beam and battery life of 2000+ hours. 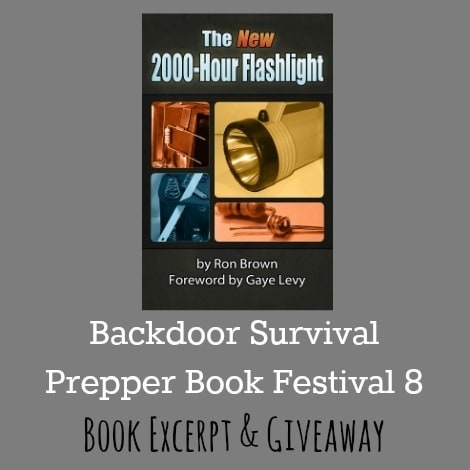 That brings me around to today.

As you may know, Eveready stopped producing the lantern style flashlight used in the original book.  So, rather than leaving folks up a creek, Ron completely overhauled the book and rebranded it The NEW 2000-Hour Flashlight and all is good.  In doing so, he expanded the type of flashlight that could be MacGyver’d so there are now lots of choices.  One goes out of production?  No big deal.  There are others.

Back on topic, Ron has set aside three copies of the print version of The New 2000 Hour Flashlight for 3 lucky readers.  He also told me he has some additional books up for grabs but he is holding me hostage for those until I send him some interview questions.  Fair enough.

But I still want to offer you something today and so, with his permission, I share his chapter on batteries to give you a feel for some of the incredibly useful information in his book.

Batteries – An Excerpt from The NEW 2000-Hour Flashlight

The purist might object to the way I use the terms ‘battery’ and ‘cell’ in this manual. Technically speaking, a battery consists of multiple cells. I’m aware of the distinction but I’ve chosen to use the terms as they appear in everyday speech. Picture two kids squabbling on the sofa. Mom intervenes. “Fred! Give him back his flashlight cells.” Would anybody really say that?

As regards to D-cell longevity, I tested Duracell, Energizer, and Rayovac side by side (all alkaline). The Duracell D-cell outlasted the other two by a fair margin. 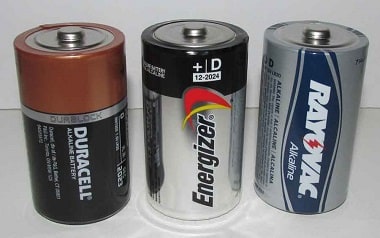 Duracell is thus the winner, providing the biggest bang for the buck amongst alkaline D-cells.

Although Duracell won the D-cell contest, when it comes to the big, square 6-volt batteries, different story. Typically, 6-volt batteries contain four F-cells. F-cells are the same diameter as D-cells but are longer.

A reader’s comment (in regard to the first edition of this book) tipped me off. He noted that Duracell 6-volt batteries contained not four F-cells but four D-cells. I couldn’t believe it! In my mind Duracell was the premier brand, $9 at Lowe’s; 50% more than the $6 Rayovac at Wal-Mart.

So I performed some surgery to get to the bottom of things. 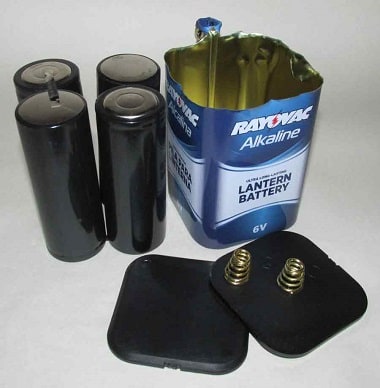 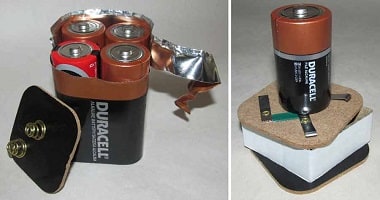 And here’s a Duracell with four D-cells inside.
Hey! Them cardboard spacers don’t come cheap, lemme tell ya.

A test showed that, whereas the Rayovac 6-volt gave 2000 hours of useful light (in the original 2000-hour flashlight), a Duracell 6-volt gave only 1100 hours.

Note that the 6-volt Duracell pictured above contains three Duracell Coppertops and one Duracell Procell. From my reading, Coppertops and Procells are interchangeable, built to the same spec. (And it would appear, judging by what I found inside the Duracell 6-volt, that they really are interchangeable. Duracell certainly thinks so.) Why does Duracell market two different brands made to the same spec? Dunno. I guess it’s just an example of corporate decision-making in action.

It’s also interesting that Duracell advertises a shelf life of ten years for their D-cells. But take those same D-cells and put them in a 6-volt case and, amazingly, the claimed shelf life shrinks to seven years. 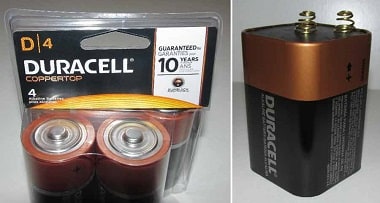 Here is the part you have been waiting for because I know you are going to want to have a copy of the print version of this book.  There will be THREE winners.

Ron and I have been pals for awhile and I both trust and respect his opinion on all things that have to do with emergency lighting, not the least of which is flashlight power.  And you know that I have a thing about flashlights!  You can never have too many.

Let us pull out all stops on this one and convince Ron we want more of the same!  For more about Ron, be sure to visit his page here on Backdoor Survival at Meet Ron Brown.

If you enjoyed this article, consider voting for Backdoor Survival daily at Top Prepper Websites!  In addition, SUBSCRIBE to email updates and receive a free, downloadable copy of my e-book The Emergency Food Buyer’s Guide.

The first edition showed how to modify one flashlight, a specific Eveready model, such that it ran 2000 hours on one battery. Unfortunately, Eveready has replaced that particular light with newer models. This edition shows how to obtain extended run times using other brands – one of which runs 2200 hours, better than the original. (Incidentally, 2200 hours equates to three months of continuous running, night and day.) In general, the modifications or “hacks” are accomplished by adding a resistor (30 cents) to a  flashlight.

Simplicity is the watchword. Wire glue (a glue containing carbon that conducts electricity) can be used in place of solder. Wire glue eliminates soldering and reduces the task from a techie project to Junior High School level.

What with floods, hurricanes, tornadoes, tsunamis, typhoons, earthquakes, blizzards, and downed power lines, there’s always a blackout somewhere. If people in general knew the information in this book, life would be a lot easier for a lot of folks.

No list of books would be complete without my own book, The Prepper’s Guide to Food Storage. The eBook print version is available. 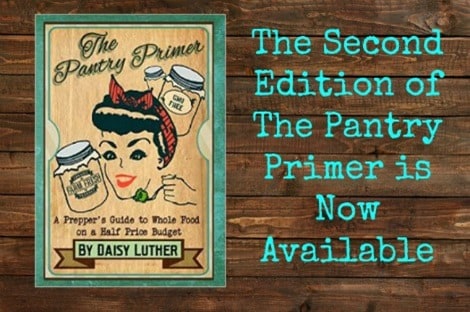 Book Festival and Giveaway: An Interview with James Mushen