Editor’s Note: This is a special contribution from longtime BDS reader Donna. Since it’s flu season, we resurfaced this one!

Making real homemade bone broth is a fantastic way to stay healthy and boost the immune system during food shortages or calamity.

Broth, Stock, Bone Broth, whatever you want to call it is the trending item for health right now. Our grandmothers trusted its healing benefits for their families and taught their daughters the art of making a nutritious bone broth.

Ounce for ounce good homemade broth is one of the most nutrient-packed foods available and is a staple in ethnic diets around the world. It is versatile, travels well and is available in liquid or powder form. It’s good for what ails you, giving the old immune system a power charge.

Believe it or not chicken, beef or fish stock is easy to make. It is a satisfying process and even the aroma of simmering stock simply makes you feel better. I enjoy making it in the Autumn when there is a nip in the air. I guess that’s just the nesting instinct.

Having a generous supply of home canned bone broth is a must for a well-supplied prepper pantry. It serves as a base for healthy soup or stew, and as a hot sipping beverage at the hint of cold or flu symptoms.

Real homemade stock contains minerals in a form the body can easily absorb. This is not your Swanson. This is not your Campbell. This is real, no sodium in the 800 mg. range, no caramel color or artificial flavor kind of stock.

The real stock has not been irradiated with microwaves as broth packaged in cartons or cans has been.

This is stock like granny used to take days to prepare. When it is finished and cooled, it becomes a nutritious gel. There’s nothing in the world like the real stuff!

There are 3 elements to consider when choosing to make or to buy stock.

For me the best chicken, fish or beef bone broth recipes are from Sally Fallon Morrell’s book.

Besides having fantastic healthy recipes, the book is simply fun to read. It contains well-researched nutrition facts, food stories from around the world, and little blurbs about what ingredients are actually contained in some of our most consumed foods.

It just might change the way you think about nutrition. Of course, there are many wonderful recipes available, so peruse them and choose the one that best suits your needs.

When anyone in our family begins to feel a hint of a cold or flu symptoms or just a smidgen of stuffiness, I head to the pantry and pull out a quart of bone broth…in every case so far the symptoms leave and health is restored quickly.

Usually there is no costly trip to the doctor’s office nor prescriptions to buy. And best of all, no head stuffiness or coughs that lasts for weeks.

There really is “something” to bone broth. Granny did know best!

Chicken soup’s reputation for curing the common cold goes back thousands of years, and this nourishing food is present in one form or another in just about every part of the world, from the traditional Jewish golden yoich to Chinese QiguoJi.

More recently, Dr. Stephen Rennard a researcher at the University of Nebraska Medical Center began to study the effects of chicken soup after a conversation with his grandmother. His findings, reported in 1993, have since been cited in more than 1,200 publications.

Dr. Rennard found that chicken soup is a veritable “soup” of beneficial ingredients that can help alleviate common cold and flu symptoms, and even help the body fight off the infection itself. And best of all, with this remedy there are no bad side effects!

The study began with a focus on possible anti-inflammatory properties present in chicken soup. His studies of white blood cell movement in particular showed that grandma’s chicken soup had the ability to inhibit that movement, which in turn would lead to decreased mucous production and reduced inflammation.

How Does It Work?

Despite years of study, scientists have not managed to nail down exactly how chicken soup works the way it does. It has been made clear that gelatin and numerous amino acids may play a large role. In addition, the warm broth may be partially responsible for relieving sinus pressure.

Some of chicken soup’s effectiveness stems from the vegetables and spices that are added.

When combined, all these ingredients make up the perfect comfort food and cold-fighting remedy. There’s no doubt that chicken soup is very beneficial.

Each of the ingredients in Grandma’s Chicken Soup recipe below was chosen for the vitamin and minerals it provides. Even if scientists haven’t quite figured out all the details yet.

Serve this at the first hint of a cold or flu. This is best sipped from a large mug while relaxing—allowing your body to renew and heal.

Chicken soup is good for you when you’re sick. That’s the widespread consensus, the wisdom passed down by mothers and grandmothers for generations. Some claim that this is just an old wives’ tale, and that the soup is really just “comfort food.” But is that really true, or does chicken soup have some special health properties after all?

As you can see, scientists have recently put this feel-good dish to the test and concluded that, once again, old wisdom holds true: chicken soup really is an effective home remedy for the common cold and flu.

Using organic or grass fed chickens is the best if you can do it. I like using the chicken legs because the long bones contain more marrow. Note the small bits of gelatin already in the pan after baking. This goes into the pot and adds a deep meaty flavor to the finished stock. 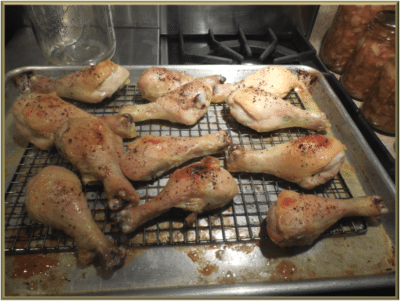 Wings and the whole carcass are healthy additions that create even more gelatin. If you have access to organic clean chicken feet add them to your broth ….. you’ll have an amazing amount of gelatin. Add any cartilage parts like chicken backs to increase the amount of gelatin produced. 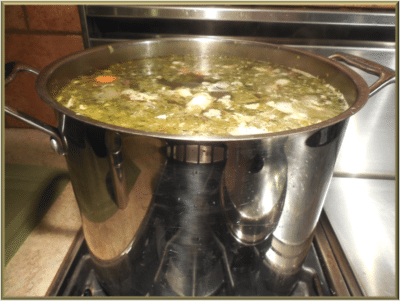 Put all ingredients into a large stock pot, cover and simmer slowly for at least 48 hours.   You may use a slow cooker but you’ll probably need to borrow a few extra slow cookers to have enough broth to make it worthwhile to process them in a pressure canner.

When all has been simmering for about an hour, remove the meat from the bones and return bones to pot and continue simmering. Save the cooked chicken to make chicken salad, or use in another recipe. 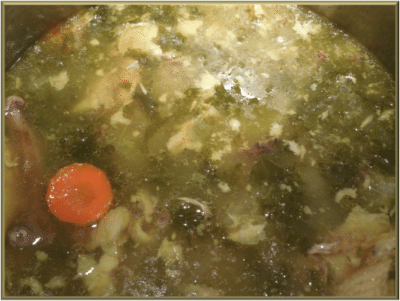 Continue simmering the bones and vegetables, being careful to maintain a slow boil. If any scum rises to the top just skim it off with a large wooden spoon and discard.

After simmering for 60-75 minutes remove the chicken and cool it enough to handle and remove meat from bones. Save meat for another use. Return bones to the stock pot. Cover with lid. 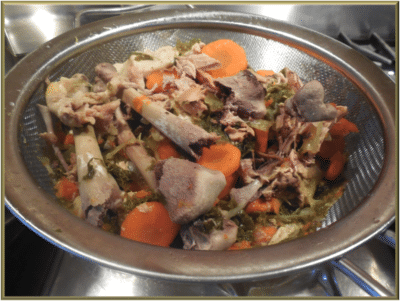 With a sieve, strain solids from broth and crack the bones. 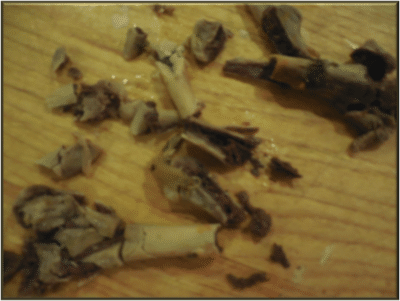 After 8-9 hours of simmering remove the bones with a slotted spoon and place on a cutting board. You will find the ends to be quite soft. With a small hammer crack the bones to expose the marrow and return them to the pot. Cover and continue simmering.

As the stock simmers the bones and cartilage are releasing minerals, collagen and that wonderful bone marrow. Don’t panic about the length of time making bone broth takes. Most of the time you can be doing other things. 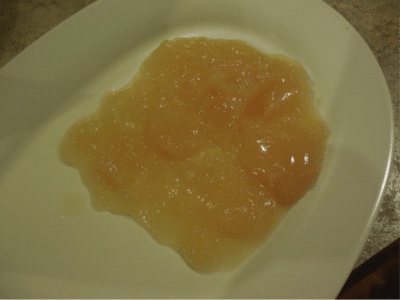 Collagen is the most important protein in connective tissue, skin, and bones; you actually have more collagen in your body than any other type of protein. Degradation or lack of collagen can cause problems from skin wrinkles to osteoporosis.

Gelatin is the cooked form of collagen – it’s the way we can eat the beneficial amino acids in the collagen without having to sit down to a plate of raw tendons for our supper. So ladies and gentleman if you want lovely skin and strong bones have bone broth often.

If you want to make beef broth you need both the knuckle bones, for the collagen and marrow bones for the goodness of marrow.

Making fish stock requires the whole fresh fish carcass as well as the head. Your local butcher or grocery seafood department will usually save carcasses for you. When I use fish stock I make chowder. It is rich and hearty. The chowder is made from the clear stock. You cannot process any milk products. 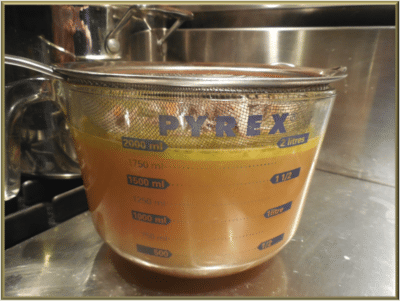 I usually have 2 large stockpots going at the same time or as I mentioned you can use slow cookers as long as the actually slow cook. Some of the newer “slow” cookers can boil on low heat. 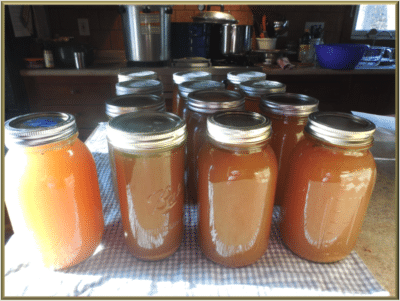 Jars of heathy goodness! Bone broth can be consumed as a beverage or as a stock base for soups and stews. You control the salt and spices. Usually a quart calls for a teaspoon of salt but I use ½ teaspoon. More can always be added after canning.

When canning broth, you must absolutely use a pressure canner, not a pressure cooker. The cooker does not get to the pressure needed to kill any pathogens that might be present.

Hydrolyzed Collagen hydrolysate is not exactly the same thing as gelatin. In the hydrolyzed form, the collagen is processed more intensively, as in pressure canning, which actually breaks up the proteins into smaller pieces.

They both have the same amino acids, but different chemical properties. When heat processed the gelatin is no longer in a gelatinous state.

Is Bone Broth Good for Dogs and Cats?

A resounding yes! One caution is to make sure it is homemade so sodium levels can be controlled. Excessive sodium intake may cause the same problem in your dogs and cats as it causes in their humans, mainly heart disease and kidney problems.

One of our grown children has a pair of German Shepherds. The older one has hip dysplasia and arthritis. Since taking bone broth regularly he is more mobile and doesn’t lay around in discomfort. Although not quite acting as a puppy he has a more youthful outlook on life.

Bone broth reduces joint pain and inflammation courtesy of chondroitin, glucosamine, and other compounds which are released from the long simmered cartilage. This is true for humans as well.

*Don’t give your animals the leftover chicken bones as they are sharp and can cause choking and death. Beef bones are fine to share with your dogs. They will love you even more!

At first glance, the task of making bone broth may seem daunting. But making it is the same as any new project. Once it is attempted, the process becomes easier and by the second or third try you become a pro.

Having a supply of nutrient rich bone broth, as a line of defense against illness, is well worth it. I have given you some basics about preparing and using it. Now you know a few of its healthful benefits.

Returning to what our Grandma’s used to make, to sustain them and their families through hard times, is one important skill we can learn now to protect our family’s health and well-being now and when calamities come.

If your time is limited or you don’t have a pressure canner there are several powdered bone broth options on the market. Whichever way you decide to go, adding bone broth, beef, chicken or fish, is a sustaining addition to excellent prepping.

As a reminder, be sure to pick up Sally Fallon Morrell’s book Nourishing Traditions here for a variety of hone broth recipes.

Coping With Emotional Distress After a Disaster

Garlic: A Powerfully Effective Herbal Remedy You Don’t Want to be Without