On more than one occasion, I have suggested that our greatest risk is that of an EMP, whether caused by natural events or a cyberattack.  Regardless of its source, experts say that the massive destruction of the power grid will send us back to pioneer days.  The difference, of course, is that back in those olden days, folks were not reliant on technology to power virtually ever aspect of their lives.

Circling back, today it gives me great pleasure to introduce you to  Lights Out: A Cyberattack, A Nation Unprepared, Surviving the Aftermath by award winning news anchor and journalist Ted Koppel.  Hang on to your seats, everyone, because if you thought you knew everything there was to know about the repercussions of a cyberattack and EMP, think again. 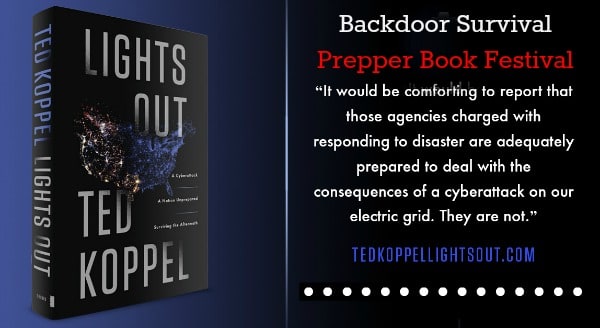 In Lights Out, Mr. Koppel makes it clear that our leaders are ill-prepared to protect our power grid. Furthermore, there are only rudimentary plans in place to help the millions who will be caught off guard with no preps and only meager skills to survive.  Think about it.  If large regions of our country were to go dark, who would be mobilized to evacuate the masses and even then, where would they go?

Without question, we are all vulnerable and as Ted Koppel explains in his book, we all need to have a plan, get ready, and be prepared.

Today, as part of Prepper Book Festival 10: The Best New Books to Help You Prepare,  I share a special conversation with Ted and, in Book Festival tradition, have five copies to giveaway to lucky Backdoor Survival readers.

Enjoy the interview then be sure to check in below to learn about the giveaway.

A Conversation with Ted Koppel, Author of LIGHTS OUT

Ted, how likely is an attack on our power grid?

When I posed that question to former Secretary of Homeland Security Janet Napolitano, she put the likelihood at 80 or 90 percent. General Lloyd Austin, who currently heads up the U.S. military’s Central Command, told me that it’s not a question of “if, but of when.” Former Defense Secretary Leon Panetta has warned of a cyber Pearl Harbor, and President Obama highlighted the threat to our power grid in his 2013 State of the Union address.

In short, government and military leaders think it’s likely, and I found no compelling evidence to the contrary.

What could happen if our power grid was attacked?

Depending on the sophistication of the attack it could take out all or part of a grid, of which there are only three in the entire United States.

Under a worst case scenario, tens of millions of Americans could be without a normal supply of electric power for weeks or even months. The resulting shortages would, inevitably, lead to civil unrest, with the likelihood that large numbers of people would flee affected cities.

The wealthy (assuming they could access their money) could relocate to unaffected parts of the country. Those without means would very likely be urged to keep moving.

You say the Internet should be viewed not only as an incredible tool, but also a potential weapon of mass destruction. That phrase has a lot of immediate connotations, specifically to nuclear weapons. Why use it here?

Using that as a measure, denying an urban population electric power (other than that produced by emergency generators) over an extended period of time would result in significant casualties: patients needing life support systems powered by electricity; the most vulnerable elderly, dependent on electric heating in the winter, cooling in the summer; and the unpredictable casualties that would result from civil unrest when food, water, and medicine are in short supply.

Why is our power grid so vulnerable?

The electric power industry is made up of more than 3,000 companies, many of them using old and difficult-to-repair equipment. The large power transformers, for example, which are crucial to the transmission of electricity across the country, are almost 40 years old on average. They are enormous, so they are not easily moved or replaced. They tend to be custom made, so they are not easily interchangeable. They are very expensive, so small companies don’t keep backups on hand, and most of them are built overseas and it takes more than a year to get a new one.

The largest, most profitable companies have taken elaborate precautions against cyberattack; but they are interconnected with the smaller, less protected companies. Like any chain, the power grids are only as strong as their weakest link.

Who is most likely to mount a cyberattack?

The Chinese and Russians are the most capable of launching an attack against one of our power grids, but because of their many interlocking interests with the United States they are less likely to do so. (As we’ve seen, of course, these ties haven’t stopped the Chinese from launching the biggest cyber-espionage attack in history, vacuuming more than 21 million personnel files out of the U.S. government’s computers).

The great danger of a catastrophic cyberattack comes from entities that have fewer common interests with the United States: countries like North Korea or terrorist groups like ISIS. There is a growing belief among U.S. intelligence specialists that independent groups already have, or will soon have, that capability.

What kind of plans are in place if the power does go out? What agencies would be responsible in that event?

The only plans our government has in place are those created to deal with natural disasters, such as hurricanes or blizzards.

A cyberattack on one of our power grids would be vastly different—its impact would be spread over a far wider area and the outage could last weeks or even months. FEMA and the Department of Homeland Security are the two agencies that have the greatest responsibility to prepare, but they disagree over the likelihood of such an attack and over how to respond.

One area of disagreement is over the option of evacuating our urban centers. The deputy administrator (the number two man) at FEMA thinks evacuation is the right option. His boss, the administrator, disagrees. He thinks there would be too many people involved, not enough time and not enough willing host destinations.

Indeed, I found that in one small rural state, the governor has developed plans to keep refugees moving: give them a sandwich, a bottle of water, and a map indicating the nearest gas stations.

Who, if anybody, is best prepared for this kind of scenario?

The Church of Jesus Christ of Latter-day Saints, the Mormons, have been conditioned throughout their history to prepare for one form of disaster or another. I devote three chapters to the Mormons and their extraordinary level of organization.

It would be difficult for any other institution to duplicate, but there are measures Mormon families take from which the rest of us can learn.

Is there anything ordinary citizens can or should do to prepare for such a possibility?

Preparing for the unexpected is always a tricky proposition.

I spent my earliest childhood years in London during World War II. The British had gone to great lengths preparing for poison gas attacks, which never materialized. They evacuated well over a million people from their cities in anticipation of German attacks, but hundreds of thousands of those evacuees, as it turned out, preferred taking their chances at home to being refugees in someone else’s home.

Past experience in preparing for the unexpected teaches us that, more often than not, we get it wrong. It also teaches that there is value in the act of searching for answers. Acknowledging ignorance is often the first step toward finding a solution.

You are going to want this book!  Ted and his publishers have reserved FIVE copies of Lights Out  for this Book Festival Giveaway.

To enter the giveaway, you need to utilize the Rafflecopter form below.  Select one or more of the options after signing in using your email account or Facebook, the choice is yours.  The best way to start is by clicking on “Free Entry for Everyone”.  After that, each option you select represents an additional entry.  There are a number of different options so pick and choose or select them all.

The deadline is 6:00 PM Pacific Tuesday with the winner notified by email and announced on the Rafflecopter in the article.  Please note that the winner must claim their book within 48 hours or an alternate will be selected.

Lights Out is not a book about doomsday and yet the consequences it describes are terrifying.  If our power grid is attacked, masses of humanity will suffer and recovery will be slow.

The message is clear; there is still much to be learned and to do in order to prepare for such an event. Make no mistake. This message is directed as much to the leaders who set policy as it is to citizens such as you and I. It is a wakeup call warning us not only of the danger ahead, but of need to educate and take our preparations to the next level.

It is my hope that Lights Out will also open the eyes of those who have thought the notion of prepping was silly.  You know who I am talking about – reluctant spouses, partners, and family members.

I don’t say this often, but this is truly a must read.  As always, be well, be safe, and be prepared.

Spotlight:  Lights Out: A Cyberattack, A Nation Unprepared, Surviving the Aftermath

In this book, Ted Koppel reveals that a major cyberattack on America’s power grid is not only possible but likely, that it would be devastating, and that the United States is shockingly unprepared.

Imagine a blackout lasting not days, but weeks or months. Tens of millions of people over several states are affected. For those without access to a generator, there is no running water, no sewage, no refrigeration or light. Food and medical supplies are dwindling. Devices we rely on have gone dark. Banks no longer function, looting is widespread, and law and order are being tested as never before.

It isn’t just a scenario. A well-designed attack on just one of the nation’s three electric power grids could cripple much of our infrastructure—and in the age of cyber-warfare, a laptop has become the only necessary weapon. And yet, as Koppel makes clear, the federal government, while well prepared for natural disasters, has no plan for the aftermath of an attack on the power grid.

With urgency and authority, one of our most renowned journalists examines a threat unique to our time and evaluates potential ways to prepare for a catastrophe that is all but inevitable.

No list of books would be complete without my own book, The Prepper’s Guide to Food Storage.  The eBook  print version is available.

Prepper Book Festival 13: Power From the Sun – A Practical Guide to Solar Electricity

77 Responses to “Prepper Book Festival 10: Lights Out by Ted Koppel”