A lot of retrospective pieces are being written about the Great Depression.  Between blog articles, eBooks, and the first-hand memoirs of those that grew up during the period, it seems that preppers can not learn enough about how people survived during this period of economic woe.

On the other hand, within the blogging world, I don’t see much being written about the Cold War period.  Perhaps I am not looking hard enough.  Or perhaps it is there but being overshadowed by concerns of the next Great Depression. 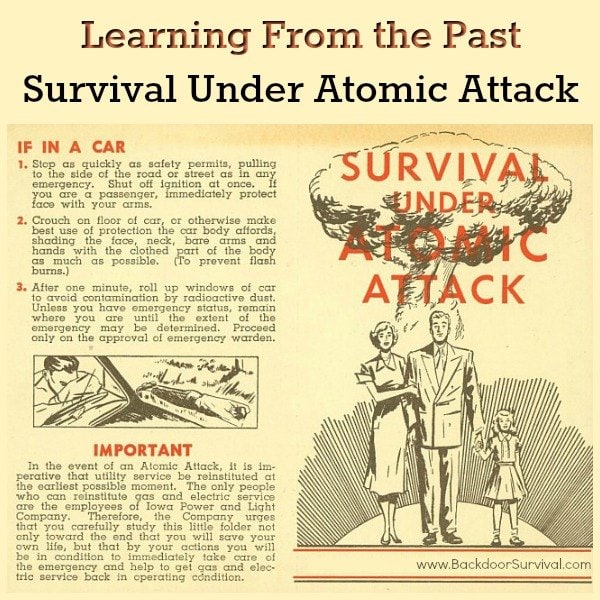 In any case, back during the Cold War days of 1947 to 1991, the US Government as well as its citizens were apprehensive of a potential nuclear bomb attack from Russia.  That was “the end of the world as we know it” scenario of the era.  It was an era peppered with the do’s and don’ts of survival as well as the commercial proliferation of bomb shelters, survival gear, and survival food items.

Additionally, the US Department of Civil Defense was active in issuing all kinds of educational material to the public.  The twofold intent was first, to educate citizens as to how to shelter in the event of a nuclear bomb attack while.  Secondarily, the OCD (as the Office of Civil Defense was called) spent a good deal of time and effort assuring the public that the likelihood of danger was minimal.

This all seems contradictory to me, but then, over the years the government has not changed much and I am certain that then, as now, contradiction was considered “business as usual”.  You might even call it propaganda.

Learning From the Past: Survival Under Atomic Attack

Interestingly enough, as I look back in time, right around 1970 and 1971 and at the beginning of my career, I worked at a decommissioned Nike missile base in Bothell, Washington (near Seattle).  The underground building had been converted in to a bunkered office for the then-called Office of Emergency Preparedness.  It was one of six similar centers built during the late 1960s.

The structure itself was totally subterranean and it was designed to be reasonably survivable in the event of natural or man-made disasters.  (It now serves as the Region Eight headquarters for FEMA.)

Little did I know then that I would be totally consumed by prepping and preparedness later in life.

The missile’s housed in Bothell were the Nike Hercules.  These nuclear-tipped anti-aircraft missiles were intended to protect Seattle and environs from Soviet bombers, should war break out. They were removed in 1974.

Today I am sharing with you some of the materials that were published by the Office of Civil Defense during the cold war era.  Depending on your perspective, you may consider the materials to be educational, humorous, silly or simply another instance of control seeking propaganda.  Regardless of how you feel about it, I find the materials to be a fascinating glimpse in to our not so distant history.

So sit back, relax, and enjoy the ride.

Survival Under Attack – The Book

Survival Under Atomic Attack was the title of a booklet issued by the Civil Defense Office in 1950. It was broadly released, with many local governments and utility districts distributing copies to their continuants and customers.

The booklet consisted of 32 pages including four pages in the center of the booklet that we designed to be removed and used as a quick reference.

The exact words were:  “Remove this sheet and keep it with you until you’ve memorized it.” 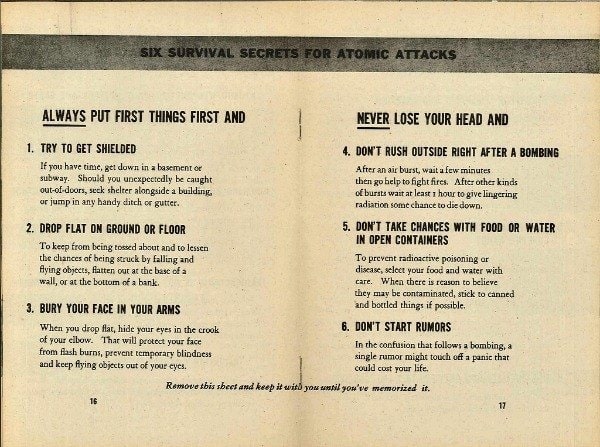 Here are portions of the text.

ATOMIC WEAPONS WILL NOT DESTROY THE EARTH
Atomic bombs hold more death and destruction than man ever before has wrapped up in a single package, but their over-all power still has very definite limits. Not even hydrogen bombs will blow the earth apart or kill us all by radioactivity.

DOUBLING BOMB POWER DOES NOT DOUBLE DESTRUCTION
Modern A-bombs can cause heavy damage 2 miles away, but doubling their power would extend that range only to 2.5 miles. To stretch the damage range from 2 to 4 miles would require a weapon more than 8 times the rated power of present models.

RADIOACTIVITY IS NOT THE BOMB’S GREATEST THREAT
In most atom raids, blast and heat are by far the greatest dangers that people must face. Radioactivity alone would account for only a small percentage of all human deaths and injuries, except in underground or underwater explosions.

RADIATION SICKNESS IS NOT ALWAYS FATAL
In small amounts, radioactivity seldom is harmful. Even when serious radiation sickness follows a heavy dosage, there is still a good chance for recovery.

1. Try To Get Shielded

If you have time, get down in a basement or subway. Should you unexpectedly be caught out-of-doors, seek shelter alongside a building, or jump in any handy ditch or gutter.

2. Drop Flat On Ground Or Floor
To keep from being tossed about and to lessen the chances of being struck by falling and flying objects, flatten out at the base of a wall, or at the bottom of a bank.

3. Bury Your Face In Your Arms
When you drop flat, hide your eyes in the crook of your elbow. That will protect your face from flash burns, prevent temporary blindness and keep flying objects out of your eyes.

4. Don’t Rush Outside Right After A Bombing
After an air burst, wait a few minutes then go help to fight fires. After other kinds of bursts wait at least 1 hour to give lingering radiation some chance to die down.

5. Don’t Take Chances With Food Or Water In Open Containers
To prevent radioactive poisoning or disease, select your food and water with care. When there is reason to believe they may be contaminated, stick to canned and bottled things if possible.

6. Don’t Start Rumors
In the confusion that follows a bombing, a single rumor might touch off a panic that could cost your life.

1. Strive For “Fireproof Housekeeping”
Don’t let trash pile up, and keep waste paper in covered containers. When an alert sounds, do all you can to eliminate sparks by shutting off the oil burner and covering all open flames.

2. Know Your Own Home
Know which is the safest part of your cellar, learn how to turn off your oil burner and what to do about utilities.

3. Have Emergency Equipment And Supplies Handy
Always have a good flashlight, a radio, first-aid equipment and a supply of canned goods in the house.

4. Close All Windows And Doors And Draw The Blinds
If you have time when an alert sounds, close the house up tight in order to keep out fire sparks and radioactive dusts and to lessen the chances of being cut by flying glass. Keep the house closed until all danger is past.

5. Use the Telephone Only For True Emergencies
Do not use the phone unless absolutely necessary. Leave the lines open for real emergency

Survival Under Atomic Attack: The Movie

In 1950, The Office of Civil Defense also prepared a short movie in 1950 explaining the dangers of the atomic bomb, the effects of radiation and how to protect oneself if caught in the open or in the home. The movie is, of course, in the public domain so don’t get suckered into buying it when you can view it online or download it for free.

You can also download the movie Survival Under Attack Movie here for free (check out the download options the left part of the screen.)

As cynical as I tend to be these days, I find that some of this information, although dated, is still valid.  Yes, some of it seems kind of silly and misinformed given what we know now.  But still, the slice of history represented in the book and the movie are significant to understanding that back in the day, preparedness was alive and well, albeit misguided by today’s standards.

In closing, I have one more short clip to share.  As you listen, keep in mind that his was produced in 1961.  So perhaps we are not the first generation to prep . . . and also not the first to have a bit of fun!

Survival is all about learning to fend for yourself. Here are some of the emergency medical supplies that belong in every household first aid kit – and every bomb shelter!  For more ideas, read Fast Track Tip #10: 8 Uncommon First Aid Items.

iOSAT Potassium Iodide Tablets, 130 mg (14 Tablets):  These were backordered for weeks at a  highly inflated price-wise after Fukushima.  Be sure to get a package now for each family member.  The way these tabs work is that they fill the thyroid gland with potassium iodide, thus reducing the chance that harmful radioactive iodine will enter and cause sickness or cancer.  For more information, see Using Potassium Iodide Following a Nuclear Incident.

New-Skin Liquid Bandage, First Aid Liquid Antiseptic:  I have been using New Skin for years.  It is an antiseptic, invisible, flexible, and waterproof.  It works.

First Voice Self-Adherent Stretch Bandage (Pack of 10):  I first learned about self-adhesive bandages when my dog came home from the vet such a bandage wrapped around his leg.  A light went off telling me I needed to add some to my first-aid kit.  And so I did.  This is a fantastic price and rivals the price at the farm supply.

Spark Naturals Essential Oils: My first line of defense for minor ailments and illness is essential oils.A good option to start with is the “Health and Wellness” kit that comes  packaged in a tin and includes a brochure with suggested uses for each of the oils.  As kits, these oils are already discounted but as an added bonus, you get an additional 10% off with discount code BACKDOORSURVIVAL at checkout.

Cooking Lessons From the Great Depression

Dealing with Dental Abscesses Off The Grid

10 Commandments of Survival You Need to Know About

7 Responses to “Learning From the Past: Survival Under Atomic Attack”