As someone that has rendered quite a bit of lard over the years I was curious about rendering tallow from beef fat so when we got our pork fat for rendering this year we also purchased 30 lbs of beef fat from a local producer of grass fed beef. Hickory Nut Gap Farm was luckily having a sale on beef fat so it was the kick I needed to give this a try. 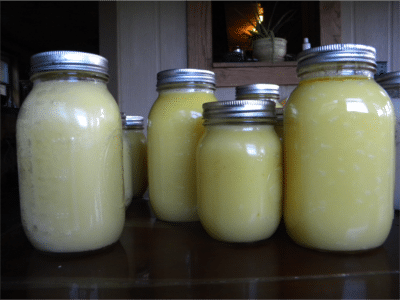 With so many gastro pubs and fancy eateries grasping for something good and different there has been an increasing demand for unique twists on old favorites. I wanted to see what all the fuss was about tallow and the flavor it offers.

Cut up tallow into cubes for faster rendering. A food processor can be used to shred it further if you want to render really fast. I just cut it into chunks using a knife with a towel wrapped around the handle to prevent slippage from it being too greasy. It is not as melty and greasy to cut up as pork fat.

The Crock Pot was turned to high for a few hours and then I turned it down to low. I was very surprised how fast the fat started rendering off beef.

It is simply amazing how much faster tallow renders when compared to pork fat. I would say that it takes half the amount of time to render.

A Note On The Smell

Before I rendered this fat I read that beef fat smells bad when rendering. I hoped that it wouldn’t be a smelly as some said it would be. As I suspected, it wasn’t that smelly with a vent hood on high and a window open.

There is a chance that if you buy lower quality beef fat that the smell might be worse. Sometimes when beef fat is bought it is just that fat that is around the kidneys. The fat I rendered was better quality than this type of fat.

Grass fed beef generally smells different than conventional feedlot beef so that might also be a factor. Regardless, I still would not recommend rendering if you have folks coming over to visit that day or early the next.

It rendered pretty fast but I came to same conclusion with tallow as I did Lard when it comes down to easiest method. The Crock Pot wins hands down for ease of use and how fast it renders. It is also a little safer to do it in a slow cooker.

Some people really like beef cracklings for cooking but after tasting them I am not a big fan. They have a very strong beefy taste that is just not for me. If you render tallow you should at least try one to see if you like them. There are a lot of Turkish recipes that use them so maybe I am missing something.

I plan on freezing mine in small bags and using them for quality dog treats. Our Great Pyrenees approve of the plan! The fat was really cheap per lb so these are pretty cheap treats, especially considering they are all meat and from grass fed cattle.

Most of the bits have been spooned out but with tallow the bits don’t rise to the top entirely so you get a lot of small bits that could probably be filtered out more easily if you poured this through cheese cloth or a wire mesh. I didn’t filter. I just carefully scooped the clear tallow off the top. If I did it again I would filter at least the last 20% of the tallow.

When it comes to jar size that is up to you. I use quarts most of the time for rendered oils but in this case I used some pints. I suggest scaling your jar sizes based on your family size or how much you plan on being able to use within a week with refrigeration after opening.

If you are using new jars then I would still give them a quick wash an rinse because they can have a smell and residue from the factory. Stick the jars in a 250 degree oven for 10 minutes or so to sterilize.

I have never had a problem with a jar not being clean enough using this method. Use a jar lifter like the type that come in any canning kit to lift hot jars out and place on a towel or other heat proof surface when ready to fill with tallow.

Fill jars with hot tallow using a ladle. Take your time with this. Hot oil is nothing to play around with. It doesn’t take too long to fill jars safely.

Make sure rims of jars are free of grease or residue after filling with tallow. You can use a paper towel with some vinegar on it if clean up is needed. Put on lids and tighten rings down. Use a towel or mitts to help with this because jars are going to be hot.

Considering that beef fat is usually the same cost as pork fat per lb but yields less oil, I prefer lard for putting back. At the same time tallow can be excellent for deep frying, making candles, and for soap. Lard was used for soap a lot years ago.

For general cooking I prefer lard but French Fries made from tallow are a delicacy everyone should try. Frying breaded chicken at the same time as the Fries and maybe a few veggies sides is a meal to remember.

Beef fat calories are definitely like lard in that they are some of the cheapest calories out there. While you can’t live on fat alone, it is important in a survival situation to get enough of it to stay healthy.

Adding a spoonful of tallow to your dinner during hard times can stretch out your other rations and make your meal more filling and satisfying. The high levels of Omega 3 fatty acids in grassfed beef fat are good for your health. Sure there are fats like olive oils and others that may have some major benefits too but imported oils are not going to be as readily available in a true SHTF scenario.

Rendering your own fats gives you some high quality oils an fats at a fraction of the cost. You are not going to find a quart of olive oil or similar for $3 a quart. Sometimes very cheap soy bean oil or canola oil can be had for that price but that is about all you are going to find.

Beef fat or tallow has 4,072 calories per lb. Assuming I yielded about 22 lbs of tallow (with the rest becoming cracklings or being lost due to evaporation)

Beef fat simply has more meat solids mixed into the fat. If you like the cracklings you get from beef then it may be worth it to you for a reduced oil yield.

Tallow is capable of a very long shelf life. In fact this is one major thing it has going for it. Even if tallow is opened and left without refrigeration it can take a long time to turn rancid. This is one reason it was so popular over the years for use in soap and candle making.

Even if it was just rendered and stored, it could be made into a lot of useful things later on. People did not waste anything they did not have to back in the day before $1 bars of soap or cheap electric lights.

Have you ever made soap or candles with tallow? How about cooking and recipes? I have some tallow to use up now and would love to hear what recipes you like the most.

Samantha Biggers lives on a mountain in North Carolina with her husband and pack of loyal hounds in a house her husband and she built themselves. When not writing she is working in their vineyard, raising Shetland sheep, or helping her husband with whatever the farm and vineyard can throw at them.

How To Store Seeds for the Long Term

6 Responses to “How to Render Tallow”