Fire season, 2017 was a devastating period for much of California. First, I am thankful to be safe. Second, in this blog, I am going to talk about fire safety and preparedness and I am going to try to be frank about what this means.

I’d like to start this process by saying that what is in the past, is in the past and nothing that you do today is going to change the past. This is not a blog about “I told you so” or a means of casting blame. The first rule of fire preparedness is to understand that some catastrophic events you cannot prep for – try as we may.

Survival of the Fittest

Survival of the fittest is part of the laws of biology that make an organism an organism. It does not, however, mean that the strongest always survive. Luck plays a role in the survival of all organisms – even man. The aim here is to move past what fire does so that in the future we can look with a keen eye and find a place where home is best positioned.

The evening of the fire, the wind started. It growled outside like a tornado and then hit the house and shook it. The sounds were incredible. Then silence. Then it came again and again. The lights flickered and I figured the power would go soon. 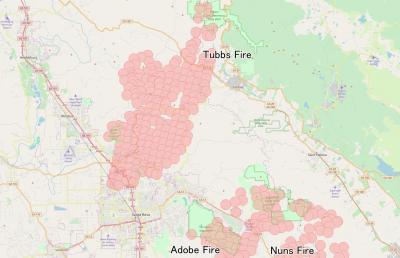 At 9 pm I went to bed not wanting to risk damaging the computer or anything else. It had already been a long day and I figured that in the morning there would be a mess to clean up and maybe or maybe not the power would be on. Such small concerns in a world that was about to come unraveled.

At 4 ish in the morning, I work up coughing on the smoke. It was thick in the house and I grabbed the flashlight and went to see what was burning. Nothing. I got dressed and went outside to see if I could see the fire. Nothing. The sky, black. The smoke thick. The wind moving it around like snow. I could not see the fire, but it had to be near. It wasn’t. I turned on the computer and the lights. No information anywhere. I checked the Sheriff’s webpage. Nothing. I checked Facebook nothing. There was a bit of information on Google about the Tubbs Fire. I read it. 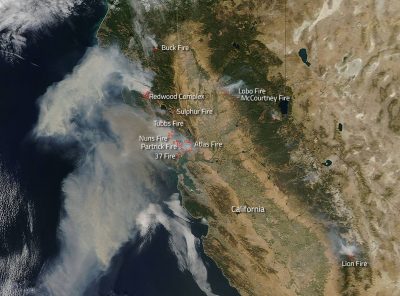 Calistoga is over an hour away by car. The smoke was thick. We thought about leaving – bugging out – but without any information, we could well be driving into the fire. We stayed. I turned on the swamp cooler and let the wet filters clean out the worst of the smoke. By 0600 the news was hot.

Clearlake was on fire too – The Sulfur Fire. By 0700 Santa Rosa was burning. In the night they evacuated two major hospitals – Kaiser and Sutter and a dementia facility. The Trailer park went up. Houses burned. Blocks burned. Neighborhoods burned. Santa Rosa was in flames. In 2016 the US Census Bureau pegged the population of Santa Rosa, California at 175,155 people. [2] View the Terran of the Tubbs Fire – https://earth.app.goo.gl/a9D8 on Google Earth.

As this sank in, we learned about the other fires. The Napa Valley was on Fire – the Atlas Fire burned 51,625 acres and 442 structures – six dead. Between the Napa Valley and Santa Rose is a mountain range. It was burning. The fire crested the hills driven on by 75 plus mile per hour winds and sped across terrain nobody ever dreamed would ignite. 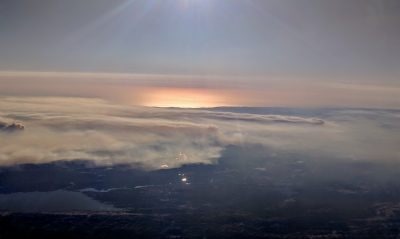 It was night time. The bombers could not fly. There were people there trapped. Windy, two-lane roads, some of them dirt. No way out. Gone. It takes about 40 minutes or longer to drive from Calistoga to Santa Rosa along the Mark West Springs Road. The fire apparently made the trip in just a few hours.

There are not enough emergency personnel to fight the fire and to wake and evacuate everyone. Situations like this are why we prep -why we prepare. It was not enough for many people. 43 People have died from the Tubbs fire. The fires however just continued to multiply. One erupted in Geyserville – Pocket Fire, one along Highway 37, a big one in Redwood Valley.

At one point, there were five major wildfires burning all within 10 miles of my house. There are only a few roads out of here. All were closed. Highway 29 takes you Calistoga and right into the fire. Highway 20 West takes you to US 101 which was blocked at Santa Rosa, and North at Redwood Valley. Highway 20 East takes you to I-5 but that too was blocked. There was no way out. There was no place to go that would have been safer than just staying put. We stayed.

There were no more fire resources left either. There was no more help.

The fire started on October 8 and was not contained until October 27, 2017. It took down 2,207 acres and burned 169 structures. The fire was started by a fallen transformer toppled by the high winds. It sprang up in the night trapping people between it and the lake. There were pleas for anyone who had a boat to head over there to pick up people stranded on the docks. Eight people dead. [3]

This part of the world is forever changed. 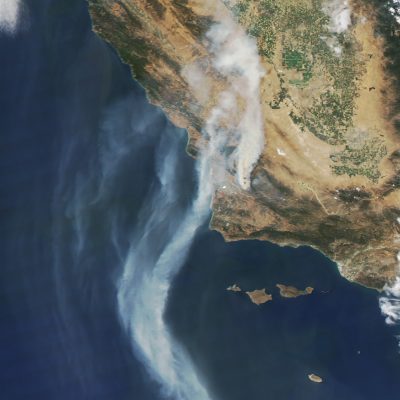 Any disaster will take a toll – Property is lost, lives are lost, in the aftermath, you are changed. Life becomes a constant worry over when the next fire will start. There is plenty of stress and anger. I was very fortunate in that I only smelled the smoke. My sister and her husband lost their house in the 2015 Valley Fire. In 2016 there was the Rocky Fire here in this community.

It has been three years of progressive devastation and 2017 was the worst thus far. We’ve also only had a tiny amount of rain and the grasses and trees here are still very dry. In my opinion, the fire season is not over – even if the trees that remain have gone to sleep the threat of wildfire remains.

What we can learn for this is where not to build our homes. Wildfire is not about your property it is about the terrain and properties that are miles away from you. It is about the path of least resistance and the freakish nature of bad luck or bad timing.

The general rule for fire safety is 100-foot clearance around your structures. In a forest, 100 feet around your house is not going to save it. It is not a defensible space. In that kind of fire, it does not matter if the fire never reaches your home or not. 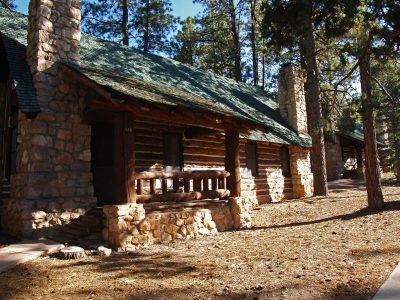 The heat from the surrounding fire will cause the place to self-combust. It will explode simply from the changes in the pressures and the rising temperature. Those points are important. That is not what we are taught. We are taught to build a defensible space as though these 100 feet are going to save us and our homes. What we are not taught is to look past that 100 feet at what is around the area.

Choose a place to build your home or buy a home where that 100 foot around your the place is defensible. Different types of fires burn with different intensities. A grass fire is much cooler than a chaparral fire. About -800-1000 °C for a grass fire [4] versus Chaparral which can top 12,000 BTU’s. in the Mack Lake Fire, the fire reached a peak of 29,700 BTU/ft/second. [5]

Understand the Nature of the Vegetation Around the Area

Chaparral is a plant that is made to burn. It has a deep relationship with fire. The plants are high in volatile oils and when they burn, they burn hot and fast.

Many stands of chaparral burn on a 10-25 year cycle, though there are some stands that have not burned for over 100 years. Those kinds of details are important. In short, where you live matters and it is the first building block in creating a secure base.

My Plan was always to go leave going one way or the other. Never in a million years did I think that, so many fires would break out so quickly. It has made me reconsider my exit plans. We are fortunate here that we have California’s largest lake.

By next fire season, my exit plans will include a boat on which I can park in the middle of the lake if what is left catches fire. There were several days where There was no place to go and if another fire erupted, it would have been life and death for many people. There were no more resources to fight another fire. Those of us that remained were on our own. 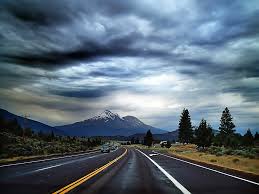 Choosing a location that has very limited access is a risk. Sure, the solitude is important and highly desired, but if the space is not defensible and you cannot get out quickly, then you are sitting ducks. We must learn from these mistakes, grieve those losses, and honor that lesson by not repeating it.

The loss of life in these fires – all people I did not know – they were still one of us and each of their deaths is just unacceptable and as such, cannot be repeated. Prepping has many aspects, but one of the main chords is to survive. The lesson for me is that leaving by truck is not always the only option. Ideally, a houseboat would be a top consideration as a fire evacuation vessel and bug-out location.

When I was awakened at 4 in the morning, there was no information only smoke. I have scanners, radios, cell phones, there was simply no information. There is really nobody to fault for this. The entire situation was so large so quickly that informing people not immediately involved was way down on the list of priorities.

What I’d like to see come out of this is a way for the public to help without being a hindrance. How that would work, I don’t know, but we are at least having conversations about improving that and in developing tools that accurately put people in touch with resources. It is important to be capable of passing on good information and not just public or personal opinion – a means of separating fact from the good intentions is a must. 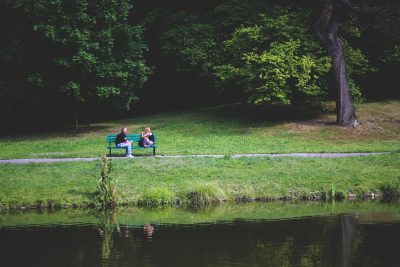 Those are all tools that we are working on in the local setting. These fires touched many different communities all at the same time and each community was divided by mountain ranges that proved to be a very little barrier to fire, but a huge obstacle for communication, firefighting, organization, and ultimate for safety.

There are many reasons to prepare for the worst but even the best plan can go wrong. You can start to improve those odds by paying attention to where you choose to live, and what your options are for surviving.

Is your Vehicle Ready for the Winter Snow Season?

3 Responses to “How to Prepare for Forest Fires: Fire Season and Preparing for the Worst”