Jerky is an ancient food preservation process that fits well into this modern world. There is a word for jerky – dried meat – in almost all regions of the world. The Egyptians are the first known people to use dried meat, yet there is a version of jerky on every continent. Jerky is an amazing way to preserve meat, especially in the times before refrigeration and in today’s times when the potential of catastrophic events is likely. A good example of this is a prolonged power failure, which occurred this summer when the local power company decided to shut off power as a means of reducing the risk of wildfires due to winds. The result was the loss of power at the house for four days. Should the situation be extended, then frozen food would likely have been at risk of spoilage. Thankfully, there is a generator in place so things in the fridge and freezer were safe. This real-world event illustrates the reliability of dried meat as a food source.

In the ancient world, jerky represents a way to harvest and store quantities of meat that help people, such as the Egyptians or even the Native Americans to store provisions for the coming winter or to produce trade items. In the modern world, there is also a place for jerky. Whether you want to make a durable snack or put dried meat away as part of your food storage plan, jerky is a hit. In this blog, I walk you through the simple process of making jerky and give you some variations of that process that might fit into your lifestyle. 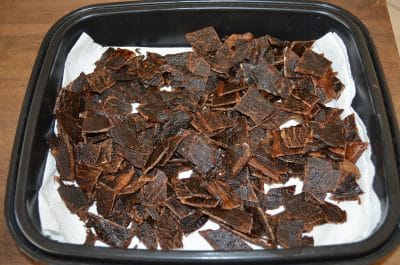 We mentioned the ancient world and as preppers, it pays to look closely at the way that ancient people lived and how they stored and preserved food. From their methods, we can adapt to modern versions that are safer, require less equipment, and produce amazing results. There are three methods of making jerky and each has a simple to a complex range of procedures. They are air/heat/smoking and you can use a dehydrator, smoker, or an oven.

Many ancient cultures air-dried meat on hot days. They used the sun to dehydrate their foods, not just meat, but also fruit and vegetables too. Some cultures built a smoky fire under the air-drying strips of meat. So, you have this blend of natural methods. It is thought that the ancient Egyptians laid strips of meat on clean, hot rocks and left it in the sun until the meat was hard. Some Native American people hung strips of meat over a fire until it was hard. Smoke is very drying and it can add flavor too. This is likely an adaptation of smoking fish.

The Methods of Making Jerky

As mentioned, drying meat can be simple or complex. What is important to consider is food safety. Primarily, we are discussing bacteria and fungi, but there are other concerns too such as pest contamination from insects such as flies. Another concern is the airborne contaminations and issues like dust poisoning. An example of this comes from my childhood. We are not permitted to eat the blackberries along the highway because of the potential of lead poisoning from particulates from car exhaust.

What this means is being somewhat aware of your surroundings – next to a freeway or road, farming and ranching, etc. – You also want to consider things like the time investment, power source, and how the dried meat fits into your food storage strategy.

In today’s world, the use of an electric dehydrator is probably the easiest way to make jerky. That process is simply to slice the meat, marinate it if desired, and then dehydrate it. The real variation comes in how you dehydrate, season, and usage.

The process takes about four hours plus prep time. If this is your preferred method, buy a dehydrator with an adjustable temperature dial (and check out our review of the Nesco Snackmaster Pro). You will want to dehydrate meat at 160 degrees Fahrenheit and do so until the meat reaches 160 degrees internally. This will ensure that the meat is dehydrated completely and that it stores more evenly and safer.

Using an oven – Gas or Electric

Set the temperature to 160-175 degrees Fahrenheit It takes about four hours in an oven to make jerky and the cost of gas or electricity can make this cost prohibited. An electric dehydrator is usually much less expensive to run. However, in a situation where you don’t have electricity than a gas oven is an option. You will also need baking sheets to catch the drippings, and racks that fit in them on which to place the meat.

This is a big subject and many ways to accomplish the task. True smoking does not really involve heat. Heat is cooking while smoking is drying. You can buy an electric smoker in which the heat dries the meat and the smoke flavors it. In another type of situation, you can make a fire and channel the smoke from the fire to the meat without the heat from the fire having much impact. This is a long process and can take a few days to achieve. In a situation where you are in the wilds or without modern conveniences, this is a really good way to make dried meat and a fairly low-cost operation too. It has its drawbacks, such as time and the increased length of time can increase food spoilage. I grew up with this option and we smoked fish on a regular basis. It can take 2-3 days to smoke fish and other meat. One advantage is that you can smoke a lot more meat at one time than you can in an oven or a dehydrator.

The setup we used was a 4’x4’x8’ rectangular box with a pitched roof. In the upper reaches, the walls were lined with slats onto which we could slide wooden frames over which we had stretched chicken wire. The wire worked well to hold the fish and help up well with usage and cleaning. For wood, we used alder and the firepit was outside of the drying chamber. This allowed the heat to rise without cooking the fish and because the alder is slightly damp it produced a ton of smoke. You can get a bit fancier with the smoke and use a variety of woods, such as apple wood, for an enhanced flavor. A word of caution, though, you cannot cook with all wood types. The trick to smoking is not to have flames, you just basically want a bed of coals where new wood smolders rather than burns with a flame.

We talked a bit about how ancient cultures, such as the Egyptians, placed meat outside in the sun to dry. Air drying is the same concept, though it can be done by lying strips of meat in the sun or suspending them on a cord so that they hang in the air. Providing there the air is clean, you can safely dry most types of meat with the exception of poultry and fowl. This is not my favorite method meat, but it works well for fruit and in situations where there is no power and a smoker is not available then you have air drying. We made frames using 2×4 boards – the size is up to you we found a 3’ x 2’ frame was very manageable. For the screening, we used tooling fabric to create an inner chamber where the meat slices lie and an outer chamber that helps keep bigger insects – wasps and flies – away and off of the meat.  The inner layer is really thin and you end up with about 1” of space between the outer tooling and the inner tooling. You could also use metal screening for the inner chamber too.

How to Make Jerky 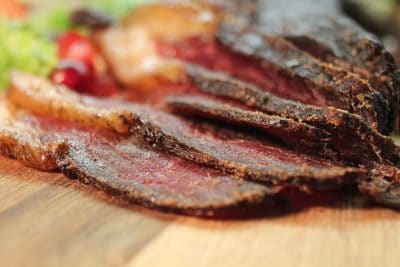 The following instructions are for an electric Dehydrator, but with a little modification, you can adapt this to any of the other methods. The key to making jerky is to understand when it is done. The dryer it becomes, the longer it stores and you want jerky that if you bend it, it will snap for longer storage but if you want it to consume in the next month or two, then it needs to be dry and pliable. Around here, we make jerky for cooking not for snacks.

Focus on Lean meats as meats that are fatty tend to store the least amount of time and the fat often goes rancid faster making the quality of your work diminished. You also don’t have to buy the most expensive cuts of meat. Good old London broil is perfect – It is lean, dries well, and is often on sale.

TIP: Keep your meat strips close to the same thickness as this means they will dry evenly and be finished nearly at the same time.

TIP: It is important that the warm air can circulate around and over each strip of meat. This allows the center of the meat to dry from both the top and the bottom and will give a better result.

If you are going to make jerky in an oven, then the same general steps are involved. The temperature can vary from 160°F to around 170°F. Higher temps cause the outside of the meat to cook and the inside to stay moist and that is not a good mix for jerky. Your goal is an even dryness throughout the strip of meat.

There is no hard and fast rule for seasonings. A good rule of thumb is to season the meat how you best enjoy it. Keep in mind that as the drying process removes the water, the seasoning becomes more potent.

The process of making jerky in a dehydrator is simple. It takes a little bit of prep and some time to check the process, but after you make a few batches, it becomes second nature. I hope that this inspires you to be more proactive in learning to make food storage a sustainable endeavor.

A Review Of The Camp Chef Oven Outdoor Gas Range

Why You Should Store Wheat for Survival

Beyond Standard Wheat : Top Grains To Put Back For A Long Emergency

2 Responses to “How To Make Jerky”