Hot peppers are a staple in many home gardens and when well-cared for peppers can overrun your home in much the same way that zucchini can. There are many ways to preserve a fresh harvest of hot peppers and those range from pickling them to canning them. A cautionary note about hot peppers is that when working with them, use gloves. They have a waxy film that can work its way into the cracks on your hands and cause blisters. Because it is waxy, it is more difficult to get off your skin once it is there. This article focuses on how to can hot peppers as pickles. Pickled peppers are amazingly versatile in meal preparation and work from anything from a side to toppings on pizza or as a zingy additive to bread. You, of course, can just snack on them too. 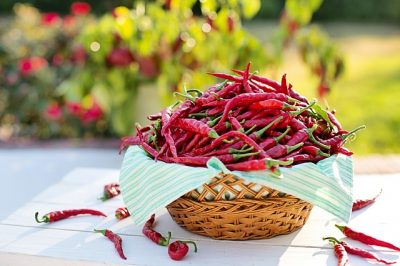 NOTE: It is important not to deviate too much from any canning recipe because you risk changing the acidity of the canning brine or solution and that would change how your canning project is processed.

Note: Vinegar – You need a vinegar that has 5% acidity. A quality vinegar will list its acidity on the label. Also, around 2010 (or so) companies began to mess with the acidity of vinegar so even the old cider kinds of vinegar which have always been at 5 percent acidity may now be different. Read the labels.

Preparing to Can Hot Peppers

Depending on the harvest, I can around 30-35 pints of hot peppers each summer. Peppers take a long time to mature enough to harvest them

In a stock pot – combine the vinegar, water, and garlic and heat until boiling. Reduce heat so that the mixture simmers for five minutes. The mixture needs to be hot when you use it so prepare after you have packed your jars and the water canner is near boiling. 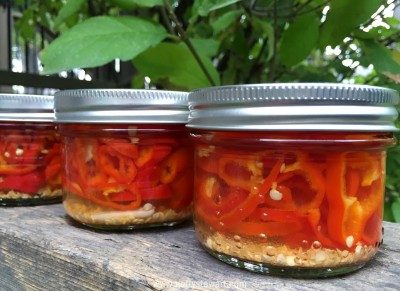 We pack the peppers into cold jars and then add in the hot brine. My goal is always tightly packed peppers which help to stretch the brine. As mentioned, you can use whole peppers, cored and seeded peppers, slices, or julienned. The jars require ½ inch headspace as the peppers will plump slightly during their water bath.

Once the jars are pack – add the brine, wipe the jar rim with a clean cloth and place the lid and ring on the jar. The ring should only be just barely tightened. I put the rings on until it just barely locks into place. You will tighten them down after the jars have sealed. The reason for this is that during the canning process air is forced out of the jar as the hot liquid expands. When the jar cools, the shrinking volume causes a vacuum and helps the jar to seal. Never Tighten the ring all the way down as the jars can explode if the air cannot escape.

Once all the jars are packed, brined, lidded, and ringed, they go into the water bath, which should be at boiling. There is a kind of production to make sure that everything kind of happens at once. For pint jars, you process them in the boiling water bath for ten minutes.

Note: if you are new to canning you want to figure out how many pint jars will fit into your water canner so that it is full and then you want to work in batches of that capacity. A 12-quart water canner usually fits seven, single pint jars. That number will change with different sizes of water canners. If you are at the end of your batch and have only a partial load, use empty clean and sterile jars filled with water to fill up the canner. For this reason, I have a small stash of used canning lids that I mark with an X so that I know they are used. If you do not fill up the canner, the pint jars may wobble around in the boiling water and break.

Once the peppers have processed for ten minutes in their water bath, remove them from the canner and place the jars on a double folded towel on the counter where they can cool. You will hear them start to pop as they seal. Do not bother the jars until after they have all sealed.

These are a high acid food, so their shelf life if stored properly is 1-2 years. My goal is always to use high acid food within 12-months of canning. Store them in a cool dark place, such as a pantry.

A Note About Storage Systems for Canned Foods

My pantry is organized by the FIFO method – First in First out – which is an excellent way to keep your canned foods rotated so that you are using the oldest canned foods first. With this method, I can store one year’s worth or more extended amount of food in my pantry. If you consider that my garden grows nearly year-round and that I have 1-2 years worth of home canned food available, then you begin to realize that my food needs are met for the next year and maybe longer.

There are many recipes out there that are variations of this. My sister makes wonderfully pickled Jalapeno peppers that are sweet and tangy. They are one of my favorite late-night snacks. There is also a method for canning peppers that are not pickled. So, if you want peppers that are better for traditional recipes without all the pickled flavor – non-pickled peppers work great. Those require a pressure canner, and we will likely cover that topic in another article.

Generally, you can count on about 25 peppers per plant. Sometimes less, sometimes much more. In my garden, I plant 10-15 pepper plants just for pickling. Overall I plant anywhere from 50-75 pepper plants in a wide array of varieties. The reason is that I share a considerable number of peppers and other produce with people and family. There are also a vast variety of ways to use peppers – not just hot peppers. But to keep on topic, one of my favorite things to do with hot peppers is to make hot pepper jam. These are delightful over cream cheese as an appetizer, and they make great gifts.

Why grow so many peppers? Beyond sharing them, a pepper plant generally requires 100 days for a seed to produce ripe fruit. Once the heat of summer fades so do the peppers. I grow enough to enjoy year-round with extra just in case the harvest is poor. Last year, the summer was densely overcast due to the smoke from all the fires and the gardens, everyone’s in the area, produced very little fruit.  As a result of the poor growing season, the peppers were small. The plants also produced fewer pods. The yield was about 1/4 of what I normally grow. The tomatoes were also pathetic. I plant 4-5 sun gold cherry tomatoes which would typically produce enough fruit to feed half of the state. One plant produced only 37 tomatoes and likely so because of the smoky air. In my garden, I plan for 1.5 times what I think I will need, and I give the rest away. I also rely heavily on my last year’s canning and this year, it has been a godsend. So, when planning your garden think about how much food you need and plant more so that you have a decent chance of meeting your yield expectation.

Feeding People in the Era of Corporate Farming

One Response to “How To Can Hot Peppers”