Pokeweed is a perennial plant that grows commonly throughout roughly the eastern half of the United States, but is particularly prevalent in the southeastern United States. It grows large at full size, and sprouts dark purple to black berries in the warm months.

For foragers, the pokeweed plant has a unique position: all parts of the plant are poisonous, but if the right parts are harvested correctly, at the right time, in the right way, and then are processed properly, it’s considered a culinary delight in certain regions. In fact, southern grannies are known to have been cooking a pokeweed-based dish called “poke sallet” for generations.

This uniquely rural, southern creation consists of young boiled pokeweed leaves that are then sautéed in bacon grease, making for a rich side dish. Poke sallet even used to be available in canned form.

The dark berries are tempting for children to eat or crush up and use to paint their faces, terrifying many parents when they discover the toxic nature of the discovery. Like all poisonous things, pokeweed has a greater chance of causing issues in children, the elderly, pregnant women, and people with compromised immune systems. And yes, it is possible to die from pokeweed poisoning. More likely, however, you’ll just have an incredibly unpleasant day or two of vomiting, diarrhea, and cramps. 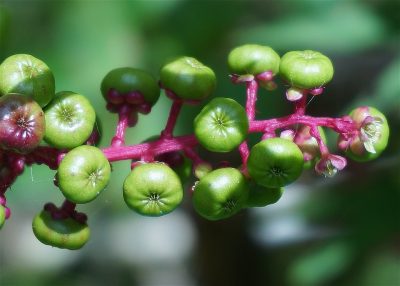 It’s only natural, then, that due to the decline in foraging wisdom, and the knowledge that the pokeweed plant can be deadly if not harvested and prepared correctly, the art of making poke sallet is at risk of becoming lost.

While being inherently more risky and labor-intensive to forage compared to other common wild greens, losing complete touch with the tradition of eating pokeweed would be a true shame. To prevent generations of passionate, fiery little southern grannies from rolling over in their graves, follow along and learn how to make foraging pleasure from a plant that, in its basic form, is poisonous to humans.

More information on foraging and a guide to our recommended books

That hasn’t stopped the plant from retaining an almost legendary status in many parts of the south, however. In fact, a hit 1969 song dedicated to pokeweed, called Poke Salad Annie, was written by Tony Joe White in dedication to the dish commonly made from the plant.

The only problem? The word “salad” implies that you eat the leaves raw, which can be deadly. You still hear folks using the term “salad” instead of “sallet,” but don’t be mistaken: tossing pokeweed leaves into a forager’s salad for your upcoming family reunion will result in, at absolute best, a very few very sickly cousins.

Either way, the cultural importance of poke sallet can still be felt in the south, in the form of pokeweed festivals held in states like Georgia, Virginia, and beyond, to keep the poke tradition alive.

Once you know it, pokeweed is easy to identify, and only has superficial lookalikes. The stems are smooth, usually with reddish streaks, becoming more red as they age. Young leaves are egg to lance-shaped, hairless, and alternate along the stem. Older leaves become fleshier and often take on a slightly ruffled appearance as they age. 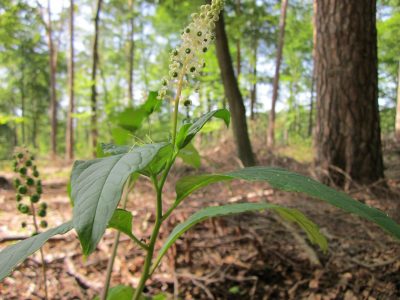 Mature leaves can be up to a foot long and four inches wide. The first shoots emerge in mid-spring, but pokeweed becomes easier to identify the older it becomes. Unfortunately you need to harvest from only young plants, so it may take a season or two to familiarize yourself with the growth stages before you can confidently identify the younglings.

Pokeweed blooms in early summer, sprouting berries that begin white and then become dark purple or almost black in appearance. The berries sort of look like long grape bunches. Depending on the plant, they can be very densely arranged, almost like a corn cob, or more widely spaced. Full grown plants can be up to ten feet tall and bushy. Several pokeweed stems often emerge from a single taproot. Flowers are whitish to green. 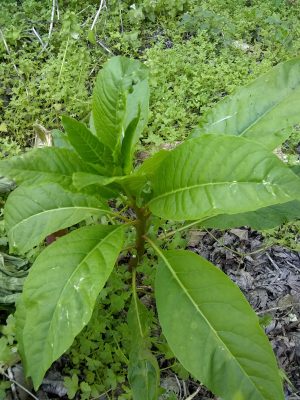 Young pokeweed looks similar to young amaranth, which is also a prized edible (and not poisonous.) To find pokeweed, look for disturbed areas where lots of weeds grow like the sides of popular hiking trails, the edges of lots, and areas where other plants have been recently cleared away.

It is recommended to only handle pokeweed with gloves, as even the leaves contain toxic chemicals. The roots should never be touched, as they contain the highest concentration of these toxins and have been known to cause reactions just from being handled. While handling the young leaves is unlikely to have an immediate effect, it’s better to be safe than sorry.

The key to pokeweed harvesting is timing. The young leaves and shoots have the lowest concentration of toxic compounds compared to all other parts of the plant, and these are the parts you use to make poke sallet. Ideally, you want the plants to be as young as possible.

I try to only harvest leaves growing from the very tops of only specimens that are six inches tall or shorter. Some foragers say that the leaves are fine to harvest all the way until right before the first white berries begin to sprout. But again, when it comes to a plant that can theoretically kill you, “better safe than sorry” is always my policy. 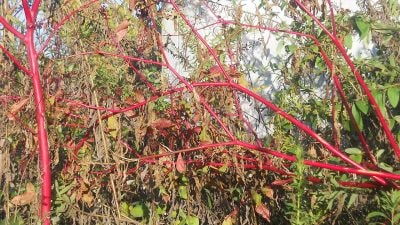 In a SHTF scenario, I might loosen this rule just to be able to harvest more food. However, pokeweed nearly always coexists with so many other fantastic edible plants that come with no risk of poisoning that I can’t imagine the added risk would be necessary to take. If you can find pokeweed, you can be pretty certain that total non-toxic edible greens are growing nearby as well.

It’s worth mentioning, however, that we eat all kinds of foods every day that could hurt or poison us if we don’t process and cook them properly. Raw pork and chicken are just two examples among many. For a wild green, however, the prospect of poisoning feels more likely and immediate. In this author’s opinion, that’s more a result of fearful modern attitudes toward foraging than a reflection of the actual level of danger.

Still, it’s prudent to wear gloves during your harvest, and minimize the degree to which you handle the leaves with bare hands. Also, never touch the roots! They are highly toxic. Thankfully, there’s no need to pull up the entire plant to harvest leaves, unless you are trying to reduce the local pokeweed population. Since the plant spreads like wildfire, this might indeed be the case. But if so, use caution. 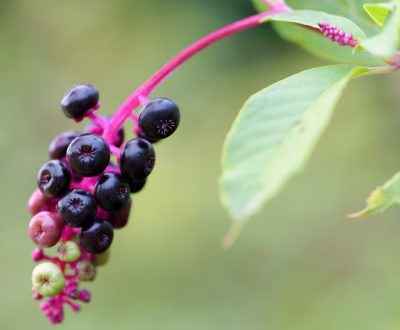 Also use caution when storing your pokeweed leaves. You should try to process and cook them within a day of harvesting, and you don’t want a spouse or child to mistake them for spinach and start eating them raw. Be sure to label them carefully, not mix them with other foods to avoid cross-contamination, and tell the rest of the household what they are.

Proper processing of your harvested pokeweed is critical to ensuring all the toxic compounds have been leached out, and you don’t end up with a poisonous meal. Thankfully, the process is simple.

All you have to do is rinse your young leaves and shoots off with cold water, then put them in a pot of water and bring it to a full rolling boil. Boil the leaves for at least 20 minutes, then dump the boiled leaves in a sieve to strain the hot water out, rinse them with cold water, and rinse out your pot to remove any residual toxins. Then bring a fresh pot of cold water to boil. Dump in the leaves and boil for another 20 minutes, and repeat. 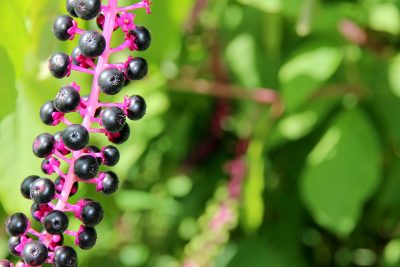 You want to boil them this way at least three times. After three or more boils, you can be close to certain the toxic components have been removed and the leaves are ready to strain and fry. Could you get away with only boiling them twice? Or not rinsing the pot each time? Maybe, maybe not. Who knows. When it comes to ensuring you’re not about to eat a toxic meal, you don’t want to take any chances.

I don’t do this, but extra-cautious pokeweed chefs will also use a fresh set of gloves every time they touch the leaves during processing. Again, I don’t bother with this step, but if you’re a bit nervous, it certainly wouldn’t hurt.

How to Cook Pokeweed

Once your young leaves and shoots are boiled in the manner described above, they are ready to cook. This is as simple as frying them in a pan for a few minutes in bacon grease. You can also use butter, but this is decidedly not as tasty, or as traditional, as the bacon grease method.

The leaves have a flavor similar to spinach, while the young shoots taste somewhat like asparagus. They will be soft from the boiling; this is part and parcel with the necessity of processing out the toxic compounds they contain.

Also take note that, as with spinach, a huge harvest of pokeweed leaves will be reduced to a very small-looking portion after boiling. The leaves shrink significantly, so don’t be disappointed if your huge bag of poke reduces down to what appears to be hardly enough for a proper side dish. Harvest as much of it as you can carry! The final product is rich in protein (by plant standards), along with being loaded with vitamins and minerals.

Simply fry the leaves until they absorb the bacon grease and become imbued with its rich, fatty deliciousness. Then, add salt and pepper to taste. For extra richness, mix in little bits of fried bacon with the greens. Then serve with eggs or as a side dish to nearly any meal, and see what southern grannies have been fussing about for so long!

Because of the repeat boiling, pokeweed is one of the most labor intensive greens I’ve ever foraged. Though tasty, I’d generally be inclined to stick with plants that don’t require tons of boiling (and come with no chance of toxicity), but as a wild plant loving resident of the south, it felt important to at least make sure I knew what all the buzz was about. 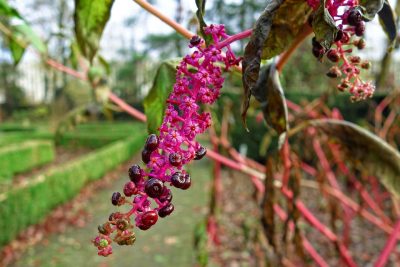 After all, poke sallet is an integral part of old southern tradition. I’d be remiss not to know how to make it, even if it’s just to spread that tradition beyond the south, and keep it alive just a little bit longer.

Interested in foraging other plants.  Our recommended books on all things foraging.

Respect for the Lowly Pinto Bean

0 Responses to “Pleasure & Poison: A Guide to Safely Foraging, Processing, and Enjoying Pokeweed”