One of the more frequent issues with food storage is the lack of viable options for those that must, for health reasons, maintain a gluten-free diet.  I am not talking about individuals who do so by choice, but those who have Celiac disease or are seriously gluten intolerant.

Since I do not have any issues in that area, I have been hesitant to write about gluten free food storage.  On the other hand, a number of readers have asked, no begged, for recommendations.

While I am still not in a position to make recommendations, I am thrilled to be able to share the experience of one reader and her family. 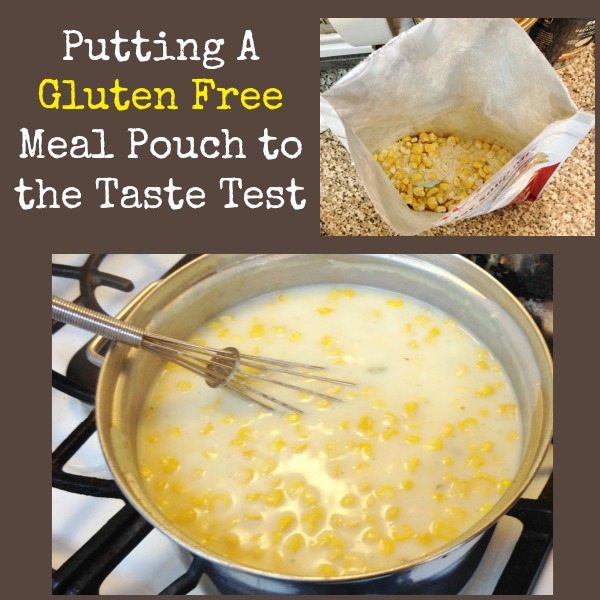 Here is how it came down.

As is usually the case, I received an email asking for advice and assistance with gluten free meal products.  Again, not having any personal experience in this area, I offered to contact one of the more popular food storage companies to see if they would be willing to send a sample to this reader in return for an honest review.  What follows is the result.

Although the reviewer prefers to remain anonymous, I am able to tell you that she has a master’s degree in public health and is a frequent commenter on the site.  She has worked in some of the largest public hospitals in the world and knows her stuff.  For the test, four family members ate the supplied pouch of corn chowder.  This included the reader/reviewer, her husband, and two teenage boys. One of those boys has gluten intolerance issues causing him extreme misery when not adhering to a GF diet.

I received a pouch of Legacy Foods’s “Legacy PREMIUM Spicy Corn Chowder Soup Mix” for a taste-test as one of my stepsons has gluten intolerance, making stocking long-term emergency foods complicated at times. The pouch was recently manufactured (dated 14DEC2016) and had very simple instructions for making either two or four servings.

I made the four servings version (the entire pouch) for my family of four as a side dish for dinner.

The ingredients in the pouch smelled very fresh and slightly sweet with bright yellow corn dotting the powdered mix and an easily identifiable bright blue oxygen absorber packet. The pouch contents mixed effortlessly and completely into the boiling water using a wire whisk, as instructed, but I believe it would likely end up lumpy without the benefit of a whisk. After boiling for 12-15 minutes, and sitting for another 3-5 minutes, the initially watery mixture had thickened slightly.

I was impressed by the fact that, besides being gluten-free, the soup mix was also non-GMO, suitable for vegetarians, had no trans fats, had almost no cholesterol per serving, and actually had some dietary fiber in it (3 grams per serving). The high saturated fat content was attributable to the use of coconut oil, a saturated fat that scientists continue to debate over but that has been shown to have a variety of health benefits.

A small amount of sugar was included, but it was actual sugar, not high-fructose corn syrup solids. Five grams of protein per serving wasn’t bad for a soup that did not contain meat or beans. Given that “potato” was the first ingredient, the soup also contained a noteworthy 20% of the recommended daily intake of vitamin C per serving. The calorie content of 280 calories per serving initially appeared good, but more on that later.

Everyone in my family loves to eat soup, so they were eager to test this out.

The first response out of all of us was that it tasted too salty and had a brine aftertaste, but as a caveat, we do eat low-sodium versions of nearly all frozen and canned foods, including soups, and don’t add salt while cooking or at the table. (We use a lot of other herbs and spices as well as salt-free seasoning mixes.)

The initially hard, freeze-dried corn had softened to a very nice texture — not mushy but tender-crisp, like eating cooked frozen corn. The corn had a surprisingly sweet flavor, but there wasn’t much corn in the soup after adding 8 cups of water. The white soup base had the appearance of being a cream-style base, but it remained relatively thin. Small pieces of potatoes were discernible as well as an occasional piece of jalapeno and some flecks of spices.

Unfortunately, the general verdict was that as a stand-alone soup it wasn’t very flavorful or substantial. However, using this soup as a base and adding other foods such as low-sodium canned chicken, canned vegetables, and canned beans along with powdered milk and/or freeze-dried cheese, and some rice or pasta plus additional seasonings could not only enhance the flavor of the soup but also substantially extend the soup and expand its nutritional value while lowering its per-serving sodium content.

After dinner, I further examined the pouch.

One serving of the soup constituted 2 cups (16 fluid ounces!). Pull any can of soup off your pantry shelf and you will see that a standard serving of soup is roughly 8 fluid ounces. I understand that Legacy does pride itself on offering “larger” serving sizes per their website, but larger serving sizes should also come with more calories and nutrients.

– A one-pot meal. Not a lot of dishes/pans to clean up after cooking. Saves clean-up time during an emergency.

– Corn is tender and sweet.

– Ingredients list is pretty short and simple. No preservatives.

– Can be used as a good starter base for a hearty soup with further additions of low-sodium canned meats, vegetables, and beans plus powdered milk and pasta/rice.

– Contains some fiber and 16 fluid ounces of water per serving, both of which can help reduce the common problem of constipation when eating freeze-dried emergency foods.

– Uses a lot of fuel to prepare, and fuel might be limited depending on the emergency situation. First you must bring 8 cups of water to a boil and then continue boiling it for 12-15 minutes.

– Requires a large deep pot, which will not fit on many compact emergency single-burner stove units (including my single-burner propane unit) or canned fuel cells with their tiny metal pot stands (including a majority of mine). The pot is also very heavy once filled with 8 cups of water.

– Requires a wire whisk, which may not be readily available in some crisis situations.

– Overall flavor was not very appealing for a stand-alone soup.

– It is not nutrient-dense. Having to consume 16 fluid ounces just to get 5 grams of protein and 280 calories is excessive. It may make you feel full to consume that much, but you will not receive sufficient calories or nutrients for strenuous activity. And then needing to eat additional foods to add enough calories may make you feel overly full or bloated.

– Too high in sodium, both for health and flavor. Saltiness overpowers all other flavors.

– Not “spicy” as described in the soup mix title — only salty. Needs more other seasoning.

– More potatoes than corn (as per the ingredients list), so the soup name really doesn’t reflect its contents.

– Soup isn’t very thick despite it looking like it should be a cream-based soup (white). Needs more/better thickeners.

In conclusion, I personally believe this product’s primary value is as a soup starter base, to which you can add other ingredients of your choice, depending on availability. Such “starter” mixes can definitely save you time and energy when cooking during an emergency.

Adding such mixes to your emergency food supply will expand your options for using staples such as rice, pasta, powdered milk, etc. However, using this product as a stand-alone meal might leave you feeling full but lacking in necessary energy and nutrients.

Because I have not tried this product myself, I can not comment on it specifically.  I do, however, include a copious amount of Legacy Food products as part of my own long-term food storage strategy.  Not being a dietician, I have not dug into the nutrients as much as I probably should.  Instead, my focus has been on taste and calories and the fact that their products are domestically sourced and GMO-free.

My suggestion, regardless of the company, is to purchase some samples up front.  Legacy Food Storage has sample packs that are reasonably priced and will give you ample opportunity to come to your own conclusion.  They even have a gluten-free sample pack.

Whatever you decide, understand that meal pouches can play a valuable role in getting you through the first days or weeks of a disruptive event.  After that, consider supplementing your meals with other store products including canned goods, packaged goods, and bulk products such as beans, rice, and oatmeal.

Here are some of my favorite food storage items. Whether you are just getting started or a seasoned pro, here are the items you will need when purchasing food in bulk for long term, SHTF needs. And for help with your food storage questions, get my eBook: The Preppers Guide to Food Storage.

FoodSaver Vacuum Sealer: As long as the unit has an accessory port (and this one does), an inexpensive FoodSaver will work just as well as the fancier models. That is my two cents, at least.

FoodSaver Wide-Mouth Jar Sealer: Already have a FoodSaver? If so, check out this jar sealer which can be used to vacuum seal your Mason jars. This is a great option for short to mid term storage of items such as beans, rice, sugar, and salt. Store your jars in a cool, dark place and you are set with the added advantage of removing a small amount for current use without having to disrupt your large Mylar bag or bucket of food.  There is also a version for regular sized jars.  See Fast Track Tip #4: How to Use a FoodSaver for Vacuum Canning.

60 – 300cc Oxygen Absorbers: This is one area where you want to make sure you are getting a quality product.

Ball Regular & Wide Mouth Jar Storage Caps:  I must have 30 or 40 of these.  I love to use mason jars for pantry storage and for those items I go through quickly, I see no need to use the vacuum seal gizmo that goes with my FoodSaver.

A Blueprint for an Effective Food Storage Rotation Plan