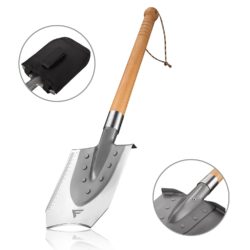 As soon as I unpacked, I was impressed. It has a real heft to it, with no hint of that dreaded “cheap feeling” you get from some tools as soon as you pick them up.

The carbon steel head feels very strong and solidly attached to the natural wood handle. While quite attractive-looking, I got the immediate sense that this was tool that could take lots of abuse. And for something that will spend its entire practical life being jabbed into the ground and slammed into wood, that’s a very important thing.

FiveJoy advertises that the shovel can handle being run over by two-ton vehicle, even encouraging customers to test their claim.

Rather than pop one of my car tires on one of the sharp edges trying to confirm this, I’ll take their word for it and just say that the thing feels extremely sturdy, well-made, and durable right out of the box.

The shovel comes with a cover, which also seems to be decent quality. Rugged-feeling on the outside, the inside has a rubbery liner that won’t get too dirty even with a dirty shovel head constantly being shoved into it. The stitching, hook-and-loop straps, belt loop, and other components on the cover all feel well-made.

Put simply, any situation in which you need to quickly hack, dig, or otherwise clear an area of debris. While there might be “better” tools for each task, a good survival shovel can serve multiple purposes in a pinch:

Other uses could include splitting breaks, cinder blocks, cutting wire, and skinning wood.

When SHTF, every item you have needs to serve a purpose. You won’t necessarily have access to your entire tool shed, so the tools you DO have ready to go should serve multiple purposes.

One of the first things you’ll notice about the FiveJoy Military Entrenching Shovel is the concave shape to the tip of the spade. Since the shape forms two edges that both dig into the ground at once, it seems to loosen dirt with greater ease, and cover more area for your digging efforts, than the standard shovel design.

The only potential downside of the curved blade design is that, compared to a standard shovel shape, removing the loose dirt as you go can be awkward if you’re digging holes that are both narrow and deep. You can’t get enough of an angle to simply drag the tip back up to capture and remove loose dirt, as the little bits tend to slip through the curved part instead of being scooped up. 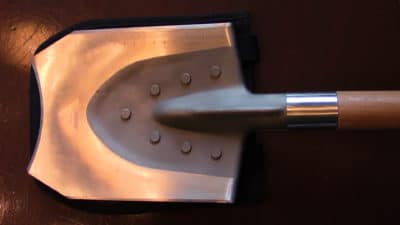 Thankfully, the reason I only call it a potential downside is, it’s still possible to remove loose dirt from deep, narrow holes with minor adjustments to your technique. It’s also pretty rare in any situation to have to dig a hole that is significantly deeper than it is wide. For that reason alone, the concave digging tip isn’t a major drawback.

Digging cat holes and a fire pit was an absolute breeze with this thing, despite the inevitable criss-crossing roots I’d encounter as soon as I started digging.

The FiveJoy Entrenching Shovel erases the familiar struggle of digging around roots, chopping awkwardly with an imprecise shovel tip, or cutting away with a separate tool just to dig a six or ten-inch hole.

Trying to set up camp in the pouring rain, with the sun quickly setting, this entrenching shovel made a world of difference. I made quick work of even the thickest, most obstructive roots and felt like I had vastly reduced the time, frustration, and energy expense usually required for digging. 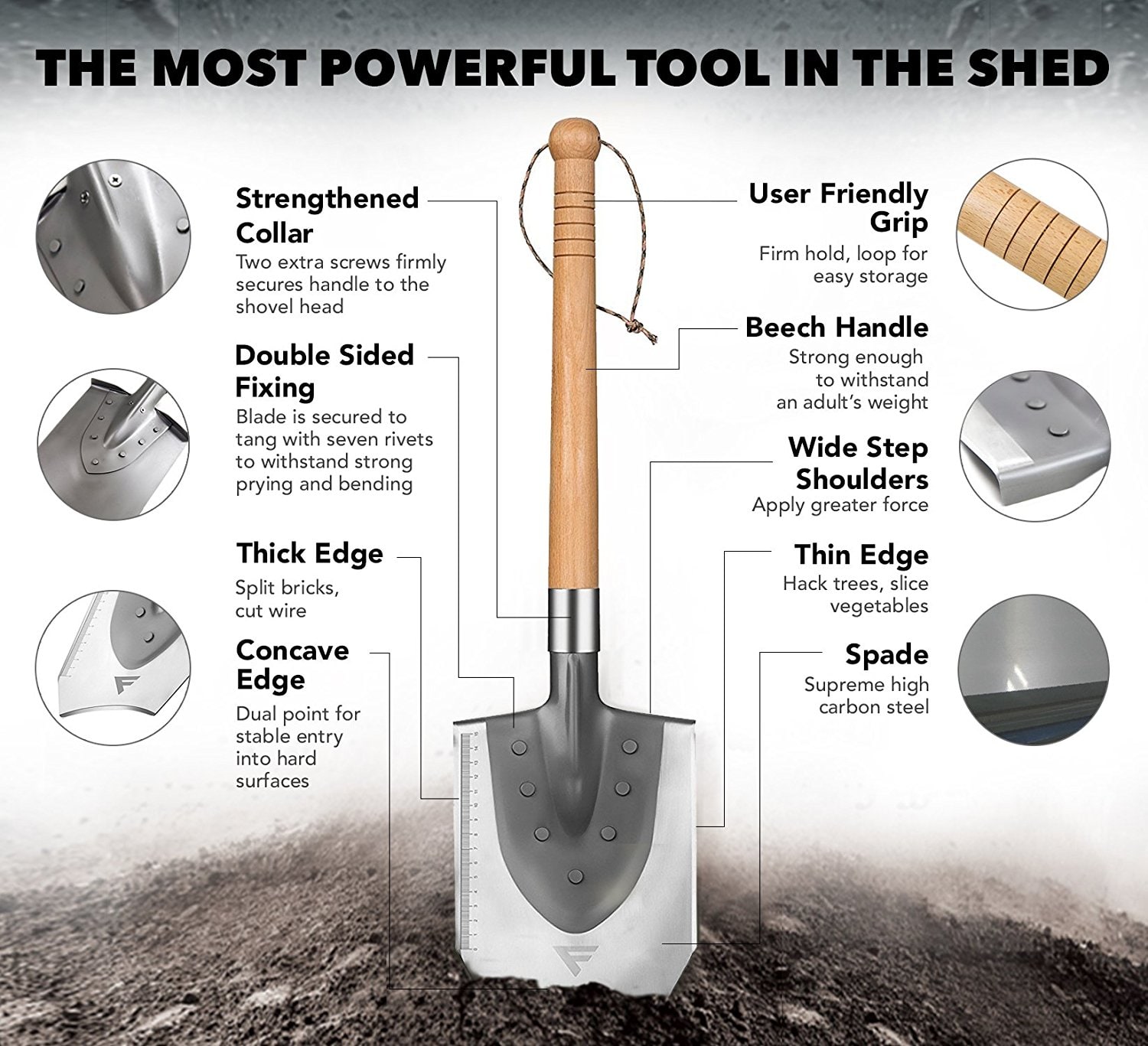 Both side edges of the FiveJoy Entrenching Shovel are sharpened to add more uses to the tool than just plain old digging. One edge is thicker and the other thinner. According to the FiveJoy website, the thinner edge is for “hacking trees, branches, chopping wood, paring,” and “slicing vegetables.” I didn’t find it effective for chopping large pieces of wood – -see the picture below to see how far the blade penetrated into some thick, partially-split logs I had out back – but for the chopping small tree branches up to two or three inches thick, it did very well. 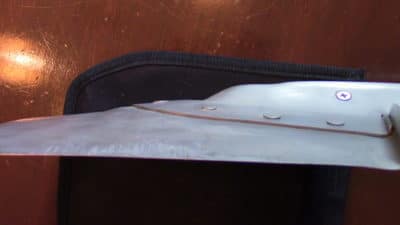 It also definitely splits smaller pieces of wood, but its use for larger log splitting does seem limited. You’d be much more assured with an actual axe, if you were depending on the shovel for major splitting and chopping. I could see it becoming more formidable for chopping larger wood if you sharpened the narrow edge yourself, but doing so would probably make the shovel more dangerous to handle. 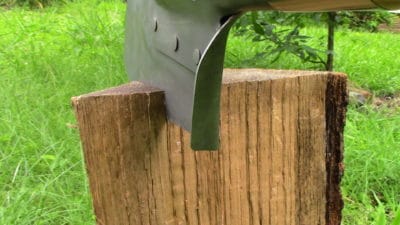 The edge had to be sharp enough to be useful, but not so sharp that people constantly ended up cutting themselves during packing, unpacking, or use. That being the case, I think FiveJoy probably struck as good a medium as they could have.

For what I see as the edges’ most important function – chopping through pesky roots as you dig – it performs brilliantly.

For slicing vegetables, paring, and other uses requiring precision and small movements, the thin edge is certainly sharp enough. But given its size, the shovel is cumbersome to use for such small tasks. With the availability of all kinds of excellent lightweight pocket knives, you’re better off just packing something small for the small slicing jobs. However, it is nice to know that in a survival situation or disaster zone where you can only bring one tool, this one is versatile enough to cover those bases if you need it to.

The thicker, duller edge is advertised as being able to cut wire and split bricks. I was able to easily chip away at a brick, but couldn’t get a clean split. Still, eventually you’d be able to find useful applications for the thick edge if you had the tool for long enough. 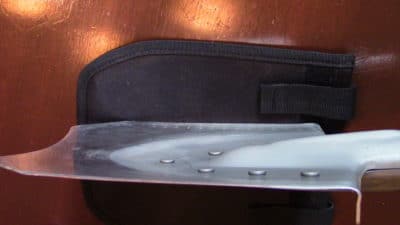 The thick edge also has metric measurement markings up to 15 centimeters. This might be helpful for little things, like making sure your cat hole is deep enough, but I’m not sure how much it adds to the shovel’s practical appeal. Still, it’s a nice thought, and shows that FiveJoy is approaching designs with those little details in mind. 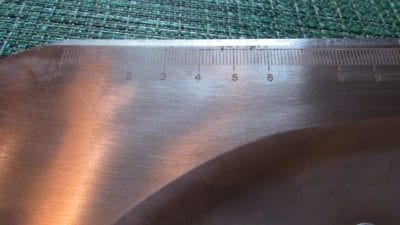 Despite not having much blade surface on either side, with a little practice, the FiveJoy Military Entrenching Shovel was surprisingly effective at chopping away branches, shrubs, and bushes to clear a small campsite. For uses where you’ll need to dig and do some chopping, it’s a huge advantage to be able to take a single tool rather than both a shovel and a machete. Besides chopping roots as you dig, clearing brush was my favorite other use for this shovel’s chopping edges. 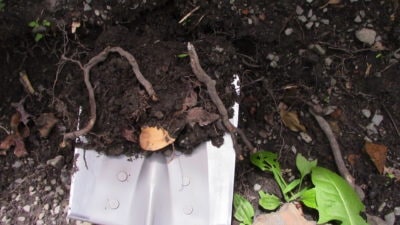 A hole drilled through the top of the handle is threaded with a rope, making for easier storage in your closet or for hanging on tree limbs around a campsite. It’s a minor but nice addition, making the tool a little bit easier to put away without taking up much space or having to lean it against something. 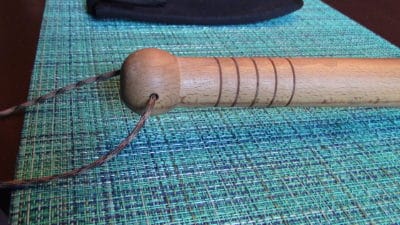 This matters even more because this is not a folding shovel, so at just over two feet from the tip of the blade to the end of the handle, it takes up more space than a small folding shovel. However, it performs at a higher level than any folding shovel I’ve used. Because of the chopping ability that most folding shovels lack, this entrenching shovel has more applications and can handle more difficult digging situations.

The flipside of the FiveJoy Military Entrenching Shovel’s heavy-duty digging ability is that at 2.04 pounds, it’s a bit heavier than most types of folding shovels. If you truly need that extra digging power, it will be well-worth the extra half-pound or so to pack, as the weight is still impressive for such a durable, powerful tool.

That being said, it may not be a great shovel for extended backpacking trips where you’re counting every last ounce.

But for short backpacking trips, camping that doesn’t involve long hours hiking, home use, natural disaster-related digging, small shelter building, brush clearing, and as a car tool for roadside emergencies, this versatile and rugged tool is excellent. For situations where you would ordinarily need to bring multiple tools, the FiveJoy entrenching shovel is an even bigger asset. 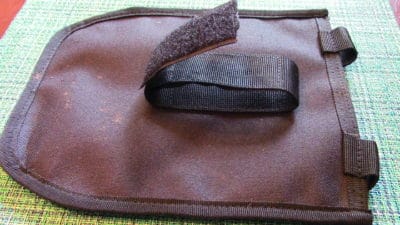 If you’re in the market for a small shovel, I highly recommend the FiveJoy Military Entrenching Shovel. For situations where you absolutely require need something ultra-light, or a shovel that folds up small, it may not be the best option. But barring those restrictions, between the concave tip, chopping side edges, superior durability, and other design details, it’s an excellent tool for everything from everyday use to bona fide survival situations.

Eric is a nature-loving writer, experience junkie, and former Boy Scout who never forgot the Scout Motto: Be prepared. Aside from camping and survival, he loves writing about travel, history, and anything he finds strange and unique!

The Best Water Shoes and Boots for Preppers

Beyond Bic: Lighter Choices For Survival and SHTF

A Review of the Boker Kalashnikov Automatic Knife