Editor’s Note: This is an updated and revised edition for 2018.

For most people, the coming of autumn brings thoughts of orange and red leaves twirling to the ground, crisp weather, pumpkins, harvest festivals, and Thanksgiving.

But for foragers, it means that root season has arrived, and it’s time to get digging!

Some of autumn’s best edible wild plants also happen to be the most common and easy to identify.

Here, I’ll go through my top four picks for the choicest edibles that you can find growing wild from the end of summer all the way until winter strikes.

Despite being a fantastically healthy and delicious subterranean treat, wild carrots are avoided by many who think they look too similar to poison hemlock to be foraged safely. 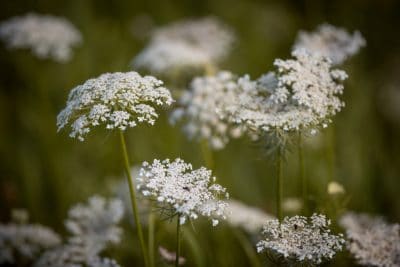 However, a few very basic checks make them easy to separate. Wild carrots have sparse, sort of parsley-like leaves, flower tops with numerous groups of tiny white flowers on them forming a dome-like shape, and a root that smells like, well, carrots! 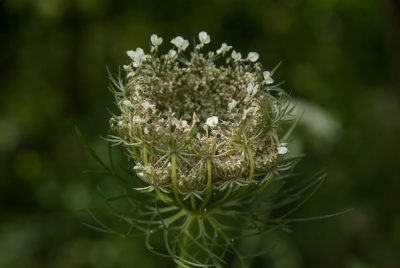 See the “poisonous lookalikes” section below for easy ways to differentiate them from hemlock.

Leaves (mostly as a flavoring herb), young shoots, and of course the roots. Fall is root season, making it an exciting time for wild carrot lovers!

Harvest roots in the fall by digging around them with a trowel.

They’re great in anything you’d use store-bought carrots for, but are tougher, so they actually tend to work even better in soups and stews since they won’t get as mushy even during a very long, slow cook. They will be smaller but more flavorful than store-bought carrots.

Poison hemlock looks similar, but is really easy to differentiate! First off, wild carrot has hairs on the stems, and hemlock stems tend to be smooth and often have a powdery coating.

The flowers of wild carrot also curl up into a kind of ball as they turn brown and go to seed, like a dead spider (sorry for the image, but it really is similar), whereas hemlock flowers don’t change in this way with aging.

Finally, pull one up and smell the root – if it smells strongly like a carrot, it’s a carrot! If it doesn’t, it’s poison. If you aren’t sure or you’re a beginner with a stuffy nose, just move on.

As with all foraging: when in doubt, throw it out!

Known by many preppers for its highly medicinal essential oils, Common Evening Primrose is also a prime edible. Plants frequently get above waist-height, reaching up to six feet or even larger, with bright yellow flowers. 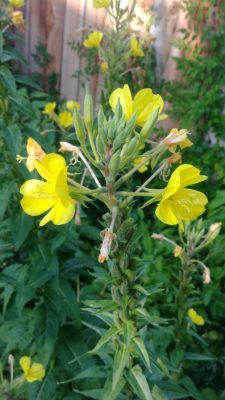 In the young first-year phase, however, the plant appears as a rosette lying flat on the ground, with distinctive white lines through the center rib of each lance-shaped leaf. In chilly weather, the leaves can have a reddish color. 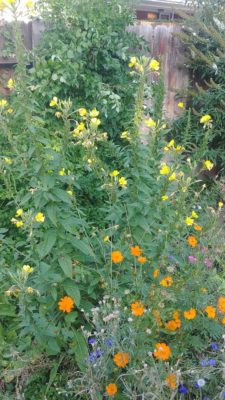 Once it grows out of the rosette stage, it forms a tough stalk with alternate leaves. Look for it in sunny areas in dry soil on trail sides and on the edges of disturbed lots.

Most of the plant is edible, though stalks are too tough. The leaves taste mild, and the roots sort of spicy and peppery.

Flowers make a mild but decorative addition to almost any meal that could use some extra color. The seed pods can be eaten as well and are highly nutritious, though I never have, so I’m not sure what they taste like!

Pop off the new leaf growths on top of the plant, and trim younger leaves from the stalk. Eat in a raw salad or stir-fry them. You can also toss them into soups. 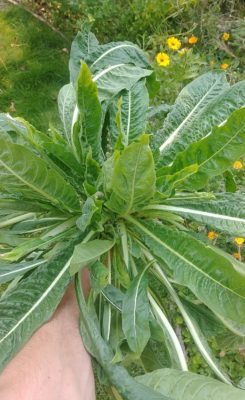 Dig up the root and use it to flavor dishes or in soups or stews. Use the blooming flowers as an edible garnish to mix in with yogurt, salad, cream cheese, or just about anything else. 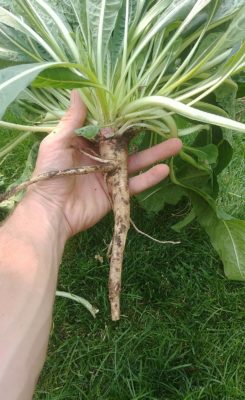 Once the leaves are older and tougher, they can be boiled to soften them up before eating. Roast the seed pods.

None to speak of.

Most people’s first brush with burdock involves getting its little burrs, said to have inspired the invention of Velcro, stuck to your clothes.

As a youngster I spent many an afternoon flinging these sticky little buggers at siblings and friends. Prized in Japan in particular, the leaf stalks and roots are the major catch of a Burdock forage. 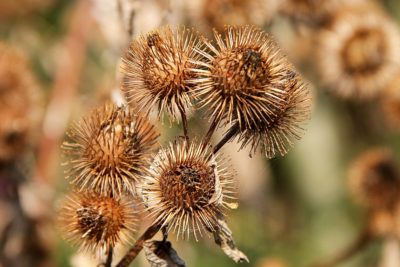 Burdock looks quite a bit like rhubarb. Its leaves become enormous, often becoming by far the largest-leafed plant of all the plants that surround it. Leaves are thick and meaty, with wavy edges.

Peeled young leaves and leaf stems are edible, but most find them too tough. The roots, ideal on younger plants, have a flavor similar to Jerusalem artichoke. 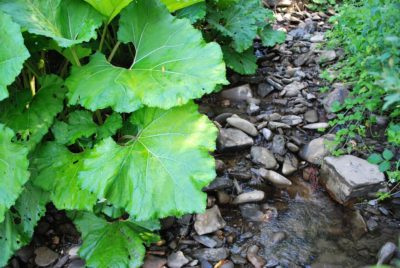 Roots are generally quite entrenched, so they take some effort to remove, but are well worth it.

Clean thoroughly and peel the tough outer rind, and you have an ideal root for just about any soup or stew.

Rhubarb leaves are poisonous, and the plant looks similar. However, Rhubarb has no hair or fuzz on the leaves, whereas Burdock leaves have hairs on their undersides.

Unlike Rhubarb, Burdock also has hollow stems, making the two easy to separate.

Once a staple of Native American diets, acorns have long-since been forgotten by most people as a food source. However, they’re a forager and survivalist’s dream.

Though labor-intensive to process, they are an incredible source of fat and protein that can be stored long-term to last all winter (or longer).

They can fall from entire forests of oak trees, making a 2,000-pound haul entirely plausible, as long as you had enough people to gather it. Acorns are living proof that while money doesn’t grow on trees, nutritious food most definitely does! 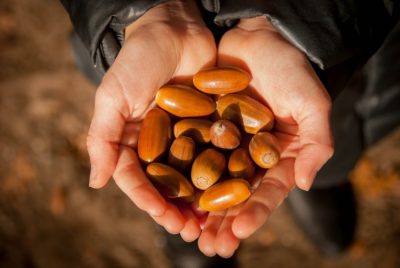 I’ll skip a physical description, since pretty much everyone knows what an acorn looks like. All types are edible, but different types of oak trees produce acorns with varying levels of bitter tannins.

Still, the underlying process for gathering and processing them is the same. You can do an on-site taste test to find acorn types that aren’t as bitter, and focus on gathering those.

Just beware: worms, bugs, and squirrels waste no time stealing each fall’s crop for themselves, so if you plan on foraging acorns, waste no time!

The nut meats inside the acorn, just like any other type of nut.

Gather fallen acorns from the ground and place into a basket or mesh bag (no plastic, as it will accelerate spoilage). You can also hold a basket beneath a tree and shake; any that fall easily should be ripe.

Caps should pop off with total ease, if they are attached at all. To find good acorns, look for any discoloration, dents, or cracks.

The meat inside yellowish off-white, and while you don’t have to break them all open to inspect the meat as you gather, but once you process them you’ll inevitably end up discarding at least a few brown or wormy ones.

To find the less bitter acorns, you can nibble a small piece and get an idea for the flavor.

All acorns are boiled to remove the bitter tannins, but some oak species produce acorns with drastically more tannins than others, so an on-site taste test is an easy way to tell without having to know every type of oak tree.

To shell them, I put them on an old towel and place a wooden plank on top, then jump across it. 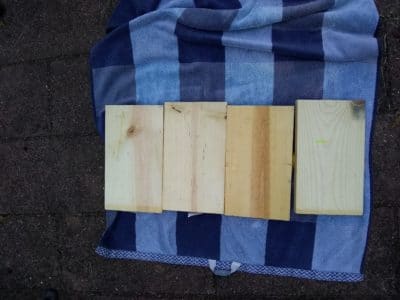 You’ll have to separate the semi-crushed nutmeats from the shell bits by hand. 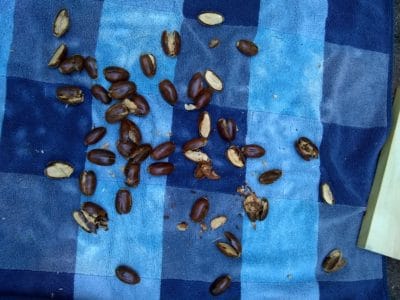 There are many techniques—this is the hardest part of processing them, so experiment to see what works best. Of course, if you have a nutcracker, you can use that as well. 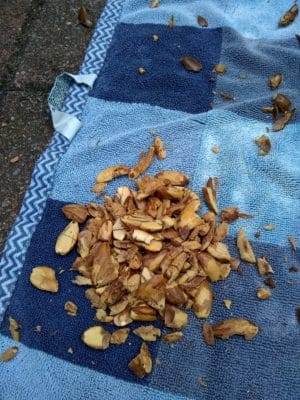 Letting them dry out a little bit will make them easier to shell. The skins are bitter, but these can be removed much more easily during leaching than shelling. 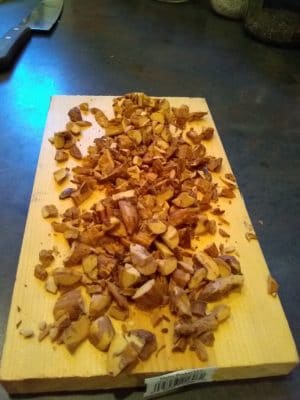 You can apparently also freeze the fresh acorns before shelling to loosen the skin. As you shell them, they will oxidize and turn brown—this doesn’t ruin them, but you can avoid it by tossing the shelled meats into a pot of water as you work.

Once shelled, they need to be leached. This is the process of removing tannins so they’re not bitter.

You can leach in cold water, which takes a long time, or in hot water, which is faster. I opt for a hot water leach, so I’ll describe that process here. Basically all leaching involves is soaking in repeated changes of water.

The major downside to hot leaching is that it cooks some of the starch in the acorn, making the ground-up final product less ideal for use as acorn flour (but fine for many other uses).

The method for hot water leeching is simple. I crush the acorns somewhat so the pieces are small, then dump the pieces into a pot of boiling water. 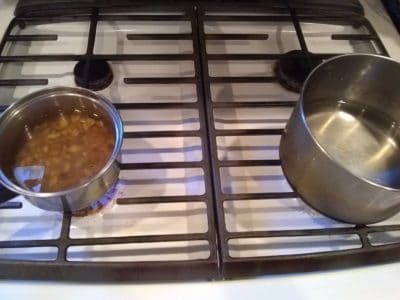 The smaller they are, the more efficiently they will leach. I leave them until the water is nice and brown, then get another pot of clean water up to boil. Remove the bitter brown skins as they disconnect and float to the top.

I strain the acorns and add them to the clean boiling water. After three or four rounds of this, nibble a piece. If there’s any bitterness, keep going. If not, you’re done! 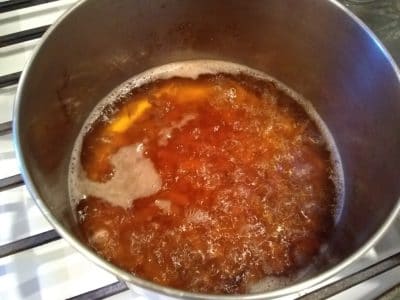 The water might still turn a little brown even after the acorns are done leaching, so judge by taste rather than the color of the water.

I’ve heard that when switching water, the clean water should already be boiling when you add them, or else it locks in their bitterness for good. I’m not sure how true this really is, but so as not to tempt fate, it’s what I’ve always done.

Once they’re leached, if the bitter skins haven’t come off, I try to rub them off or shake the nuts between two ceramic cereal bowls to remove them for a less bitter final product.

Then put them in a coffee grinder, food processor, or strong blender to turn them into mash. They will dry more easily this way than if you leave them in large pieces. 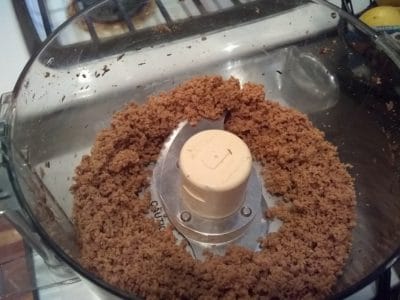 Once ground up, put them in an oven or dehydrator at heat below 150 degrees Fahrenheit, to avoid cooking the starches further. I used 110 degrees for about two hours. 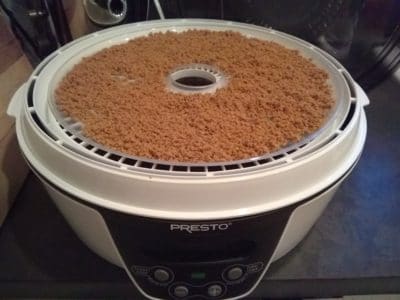 You can crush them into mash after dehydrating, and just dehydrate the larger pieces, but since they’ll be quite soft after leaching, they grind much more easily while wet. They will also dehydrate much faster if they are ground up first.

Once you have your dried acorn meal, you can grind it even finer or use it as-is. Some great uses include soups, tasty vegan “burgers,” meat rubs, sauces, or stews, or just salt them for snacking (you may want larger pieces for straight snacking purposes, rather than a mash, so consider this before you grind). 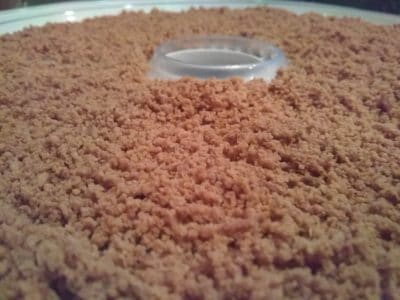 Once dried, try different recipes! There are plenty of tried-and-true ideas online that show just how versatile and delicious acorns can truly be, far from the bitter, wince-inducing “survival mush” that many people envision.

Eric Raue is a nature-loving writer, experience junkie, and former Boy Scout who never forgot that time-honored Scout Motto: Be prepared. Aside from camping and survival, he loves writing about travel, history, and anything he finds strange and unique!

Security Cameras: What You Need To Consider Before Purchasing and Installing