It seems like just yesterday we could wake up each day to a routine.  We would get up, go to work, eat an evening meal, then spend a bit of downtime with friends and family or in the pursuit of personal hobbies.  We worried about making ends meet, our careers, and the health of our loved ones.

What we did not worry about was being safe from terrorist attacks, nuclear wars, global pandemics, or an economic collapse. 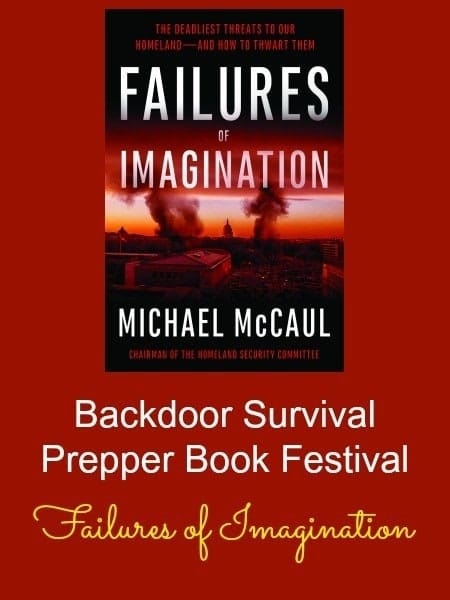 Alas, times have changed, and with each day we face more uncertainties.  Couple these uncertainties with little confidence that our government and our leaders have a pulse on the world situation, and we feel a sense of abandonment.  Our solution is to prepare.

With that introduction, I introduce the final book in Prepper Book Festival #11.  Failures of Imagination: The Deadliest Threats to Our Homeland-and How to Thwart Them was written by Michael McCaul, Chairman of the House Homeland Security Committee.

In this book, Chairman McCaul gives us eight vignettes representing plausible terrorist events; events that we need to know about.  Each chapter begins as though it is a novel, getting right to the heart of the matter, and working up to a specific attack.  Different perspectives are given, from the terrorist themselves to the innocents affected by the attack.  Concluding each chapter is a summary report to the president and a discussion of “Could this really happen?”.

In this very special book festival article, I have received permission to post an excerpt from the book, plus, in Book Festival tradition, have a dozen copies of Failures of Imagination up for grabs in a giveaway.

Enjoy the read then be sure to check in below to learn about the giveaway.

In hindsight, there was nothing improbable in 1941 about Japanese fighter-bombers descending from the skies over the most vulnerable American port in the Pacific. Similarly, there was noth­ing improbable in 2001 about civilian airliners being turned into cruise missiles targeting America’s symbols of financial, military, and political power. Indeed, less than a decade earlier, terrorists had bombed the very same World Trade Center with the intention of toppling both towers.

As the 9/11 Commission put it in their oft-referenced report on the attacks: “The most important failure was one of imagina­tion.”

Admiral Bobby Inman, a veteran of the intelligence com­munity who served in senior positions at the CIA, DIA, and NSA, said that 9/11 was “grounded in a failure of the imagination,” the kind in which “you don’t know what you are looking for; you don’t know where to look.”1 We didn’t see the enemy coming. Because we didn’t want to.

Expanding the limits of our imagination is the purpose of this book.

The goal is not to frighten people and certainly not to en­tertain. Instead, it is to envision possible scenarios through which terrorists, foreign nations, and their allies could inflict great dam­age on our homeland. In other words, we can’t afford to live under comfortable and false assumptions any longer. We need to imag­ine the worst in order to prevent it.

Today, the free world faces numerous dangers, many of them brought to us by the same sort of radical Islamists who once al­lied themselves with Hitler. These enemies of civilization seek the death and destruction of the American way of life, and they view no citizen of our nation as an innocent bystander. They seek the world’s most lethal weapons and will gladly kill any man, woman, or child in their line of sight.

There are other dangers that await us in this new century, too, from lone-wolf terrorists seeking to sow chaos to amoral cyber-mercenaries to nations seeking to undermine America’s global leadership and maybe even the very foundations of our democ­racy itself.

Make no mistake about it: the United States of America is still very much a target.

Operations against us, using diverse methods, are discussed around the world—and here at home—every single day. Our vulnerabilities are being probed, our fortitude tested. Foreign citizens, even our fellow Americans, are being recruited to wage acts of horror and violence on our homeland. Some of these attacks have been thwarted in their planning stages; oth­ers were stopped when they were far closer to being carried out. Other plots are forming even now, waiting for just the right mo­ment. And we are not ready for them.

Fourteen years since the September 11 attacks, the United States is not any safer. In fact, we are less safe, even as the threats against our people multiply. That is why this book is needed so urgently.

Before my election to Congress, I was a federal prosecutor. I served as the chief of counterterrorism and national security in the U.S. Attorney’s Office for the Western District of Texas, where I led the Joint Terrorism Task Force (JTTF) and got a firsthand look at the threats against our citizens. Now, as chairman of the U.S. House of Representatives’ Committee on Homeland Security, I see every day the interconnected threats that span the world and link together America’s web of enemies.

I’ve also met the dedicated men and women working around the country and around the world to stave off these threats. One exercise in which the intelligence community frequently engages is setting up so-called Red Teams, informal groups of people tasked with the job of thinking like our enemies, probing our own weaknesses, and gaming out future scenarios in which American security might be put at risk.

This book is a series of Red Team exercises in which ordinary Americans can be observers. They have been developed in con­sultation with experts in a number of fields and reflect the lat­est unclassified intelligence assessments. There are, of course, any number of different potential terror scenarios to choose from, but for the purposes of this book, our list includes:

➤ A “decapitation strike” on America’s political leadership at the U.S. Capitol

Each of these scenarios is shown through the eyes of those who would see it play out on the ground. You will see the perspectives of the attackers and their victims. And you will experience, in real time, the launching of a major assault on the United States.

From there, we will move to an analysis that delves deeper into the possible avenues for planning and executing such an attack, including hints from real-world events that should be taken into account and flaws that could be exploited. Finally, we will discuss the future in the form of recommendations and strategies to pre­vent these kinds of attacks from happening.

When counterterrorism work consumes so much of your life, it’s easy to become complacent and assume that others are aware of these issues as well. The truth is, most people aren’t—even if they should be. That’s why I wrote this book. I have intended it to be accessible to every American: policy makers, intelligence of­ficials, our military servicemen and -women, and to any member of the public who wants to understand the ever-growing—and ever-changing—nature of the dangers to our country.

At the very least, we should expect our own government to be honest with us.

Reprinted (or Adapted) from FAILURES OF IMAGINATION: THE DEADLIEST THREATS TO OUR HOMELAND—AND HOW TO THWART THEM Copyright © 2015 by Michael McCaul. Published by Crown Forum, an imprint of Penguin Random House LLC.

Chairman McCaul and his publisher have reserved 12 copies of Failure of Imagination for this Book Festival Giveaway.

The deadline is 6:00 PM Pacific Tuesday with the winners notified by email and announced on the Rafflecopter in the article.  Please note that the winners must claim their book within 48 hours or an alternate will be selected.

Note:  This giveaway is only open residents of the United States.

The message is clear.  These eight scenarios represent a wakeup call to our leaders.  In my own words: quit fooling around and start thinking outside the box.  Think like a terrorist and come up with a plan of counterattack.

The message for the rest of us is also clear.  Keep on prepping to the best of our ability and budget.  We, too, must think outside the box and become proficient at skills to use if forced to hunker down for awhile. Move outside of your comfort zone if need be, and remember that there is always something to do to further ensure are comfort and safety if the SHTF.

For more information about the books in this latest book festival, visit Prepper Book Festival 11: The Best New Books to Help You Survive.

Spotlight: Failures of Imagination: The Deadliest Threats to Our Homeland-and How to Thwart Them

America’s inability to foresee the September 11, 2001 attacks was deemed a collective “failure of imagination.”  Our political leaders and intelligence professionals failed to anticipate the wide-ranging and unorthodox threats to the nation’s security.

Nearly a decade and a half later, imaginations in Washington D.C. are still failing.  Despite assurances from our leaders that America is safer today than it was before 9/11, the truth is, we are still vulnerable.

Congressman Michael McCaul has spent years in Washington watching the Obama administration ignore or dangerously underestimate the most pressing threats to the country.  In Failures of Imagination, the sitting chairman of the Homeland Security Committee, who receives daily intelligence about threats materializing against America, depicts in real time the hazards that are closer than we realize.

From cyber-warriors who can cripple the Eastern seaboard to radicalized Americans in league with Islamic jihadists to invisible biological warfare, many of the most pressing dangers are the ones we’ve heard about the least—and are doing the least about.

Failures of Imagination offers a call to action for Americans to address these very real and present dangers, and the need for the White House—whoever its occupant will be—to combat them with the seriousness and urgency they require.

No list of books would be complete without my own book, The Prepper’s Guide to Food Storage.  The eBook  print version is available. 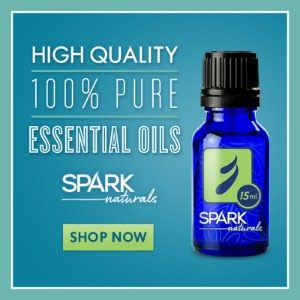