Before I begin, let me put this out there.  Ebola is most assuredly a deadly virus but I am not afraid nor am I in fear of the virus itself.  I have prepared the best that I know how and will do what needs to be done to isolate myself if Ebola moves into the neighborhood.

Now that we have put that aside, I will tell you what I do fear:  Biological Warfare.  That scares the heck out of me.

At the risk of being overly dramatic, today I share another aspect of Ebola and other potential pandemic agents.  Biological warfare, or bioterrorism, is one of those disasters that we should fear and whereas it has not yet happened on a global basis, the possibility is out there. 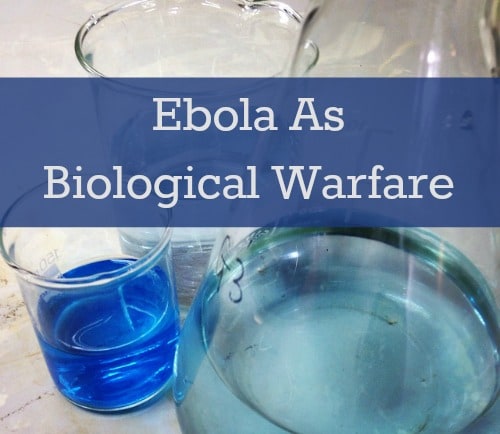 Ebola in the Western World

A few days ago, during our weekly call, George Ure and I discussed Ebola as it relates to internet marketing.  Within days of Ebola landing on US soil, eBooks, video courses, and pandemic kits were being pitched by those wanting to make a buck on the backs of Ebola and pandemic-related fears.

Sarcasm aside, we noted that without discussing it in advance, we had each posted a few Ebola-related articles but then moved on to our normal fare of economic and coping news (Urban Survival) and prepping and lifestyle tips (Backdoor Survival).

Coming full circle, we agreed that in our opinion, most Ebola victims in the US and other western countries would stand a good chance of recovery.  We attribute this belief to better hydration with clean, pure water, the availability of state-of-the-art medical treatments, and sophisticated isolation and quarantine procedures (CDC protocol goofs notwithstanding).

The big deal and the cause for concern is the potential use of Ebola or another deadly agent as a tool for biological warfare. What is to stop an infected bioterrorist from walking across our border, getting on a plane headed to a major metropolitan area, and coughing up a storm to spread the Ebola virus?  Or introducing bodily fluids into the water supply of an urban area? Or simply adding Anthrax to the salt shaker in a popular restaurant?

Now that, the act of bioterrorism itself, is something to fear.

So here is the deal.  Contributing Author Dr. Joe Alton has written a thoughtful article that goes through the history of biological warfare and why we should or should not be concerned.  He has asked that I distribute this article so that you can learn and become better educated relative to biological weapons.

I agree that information is power and leave it up to you to come to your own conclusions.  Could Ebola be used as a form of biological warfare?

With Ebola in the news, there are some that have pointed out the possibility that some nations may attempt to weaponize the virus. This is a concern that deserves discussion, so let’s talk about something that few consider a likely cause of a collapse scenario: biological warfare.

Biological warfare is the use of infectious agents such as bacteria, viruses, fungi or their by-products to wreak death and havoc among a specific population. The user’s goal is to achieve control over an area or a segment of the population by weakening the ability to resist. Biological weapons don’t necessarily have to directly kill: unleashing a horde of locusts to destroy crops or agents that kill an area’s livestock can be just as effective.

This type of weapon has been used since ancient times, and even appears in the bible as some of the plagues visited upon Pharaoh by a wrathful God. Medieval accounts of diseased corpses catapulted into besieged cities abound; this method was used as late at 1710, when the Russians attacked the Swedish city of Reval (present day Tallinn) in this manner.

The Western hemisphere was changed forever by the inadvertent introduction of smallpox into the Native American population, killing 90% in some areas and opening vast swaths of land for European colonization. In addition, purposeful biological warfare occurred against Native Americans when the British presented a large “gift” of infected blankets as a “peace” offering during Pontiac’s War in the mid-1700s.

As time progressed, new methods and infectious agents such as Anthrax were used in certain situations during World War I. As a result, use of biological weapons was banned by the Geneva Protocol in 1925, but research and production was still carried out by both sides during World War II. Research into the use of Anthrax by the United Kingdom left their laboratory area in Scotland contaminated for the next five decades.

Eventually, the storage, production, and transport of such agents was banned in 1972 by the Biological Weapons Convention (BWC). Despite this, there are a number of violations that have been documented in the former Soviet Union and Iraq, and various others suspected. Presently, 170 countries have signed the BWC pact.

CHARACTERISTICS OF THE PERFECT BIO-WEAPON

The perfect biological weapon would have these characteristics:

• Be infectious and contagious in a large percentage of those exposed
• Cause severe long-term debilitation or death of the infected organism
• Have few available antidotes, preventives or cures
• Be easily deliverable to the area or population targeted
• Have low likelihood of causing damage to those using the agent

Some candidates for use as biological warfare agents include Anthrax, Smallpox, Viral Hemorrhagic Fevers (Ebola, etc.), and Pneumonic Plague.

Anthrax is a bacterium that can be contracted in several ways: Skin contact, inhalation, and through the gut. More common in livestock than people, Anthrax may be transmitted through the air, but isn’t perfect as a weapon. A “cloud” of Anthrax would be necessary to affect a large population. Large numbers of infected livestock, however, could result in an epidemic of the disease in humans.

Having said this, Anthrax has been the biological weapon of choice. Why? It is exceptionally hardy and can survive for centuries in the ground despites weather extremes.

Although Penicillin, Doxycycline, and Ciprofloxacin (Fish-Pen, Bird-Biotic, and Fish-Flox) are effective against this bacteria if treated early, full-blown inhalation Anthrax is deadly.

“Pneumonic” is one of three types of plague and, by far, the most contagious, easily spread by coughing bacteria into the air. It is caused by a bacterium known as Yersinia Pestis, usually found in rodents and other small animals and their fleas.

Unlike inhalation Anthrax, which may take weeks to develop symptoms, patients with Pneumonic plague may be dead in 2-4 days if not treated early. Tetracycline (Fish-Cycline), Doxycycline (Bird-Biotic) and Ciprofloxacin (Fish-Flox), and IV Gentamycin are common treatments.

Smallpox is another viral illness that is highly contagious and was responsible for the decimation of the Native American population in the Americas . Once infected, there is no cure. Although rare in developed countries now, FEMA is still thought to stockpile Smallpox vaccines in enough quantity to vaccinate every U.S. citizen.

The candidate in the news today is Ebola Hemorrhagic Fever. The current strain of the virus in West Africa has a 55-60% death rate and is out of control in the epidemic areas. You would think that Ebola would, therefore, be an excellent choice as a biological weapon.

It isn’t. Ebola virus is very sensitive to its environment and just doesn’t last long outside a host. It doesn’t tolerate sunlight and needs high temperature and humidity to survive. Most cities in developed countries don’t have the climate conducive to Ebola’s survival.

It’s, also, not easy to work with. Even if a terrorist kidnapped an Ebola victim, working with the virus in anything less than an advanced microbiology lab (called a “Biosafety Level 4”) would likely result in the terrorist dying from the disease. As well, Ebola virus is too sensitive to survive the complex process of refining, enriching, etc. that is necessary for weaponization.

So don’t panic the next time you read about “Ebola Gas” or “Ebola Bombs”. Be aware of the virus, have supplies available that will help in a crisis, and use your most important survival tool: Your mind. Do you own research, get the facts, and come to your own conclusions.

In many respects, preparing for a pandemic is no different than preparing for any other disruptive event.  The only difference, in my view, is an increased focus on sickroom supplies, shelter in place tactics, and a what-if lockdown strategy.

As I said at the onset, I do not fear an Ebola pandemic per se, but I do fear biological terrorism regardless of the actual weapon used to evoke the mass destruction of humanity.  Ebola as biological warfare?  It could happen.

My advice to you?  If you have not done so already, read the article Preparing to Hunker Down in Place and ensure that you have at least a month’s worth of extra food and water supplies.  Be mindful of your surrounding and the people around you, and, as always, be a responsible prepper and citizen of the world.

If you enjoyed this article, consider voting for me daily at Top Prepper Websites!  In addition, SUBSCRIBE to email updates  and receive a free, downloadable copy of my e-book The Emergency Food Buyer’s Guide.

Bargain Bin: Here are some of the basic preps you should have on hand, pandemic or not.

3M N95 Particulate & Respirator Mask: This is an inexpensive mask that can be used in a variety of emergency situations. They come in a box of 20 and are NIOSH-certified. The molded cone design is fluid and splash resistant and will greatly reduce your exposure to airborne particles.

Moldex 2730 N100 Respirator Mask:  Do not confuse P100 masks with the N100s.  N100 is what you want since the P100’s are used to filter particulate only and not gasses and vapors.  For a smaller person, I suggest the Moldex 2731 which is the same mask in a size small.  For additional information, read Surgical Masks for the Survival Kit.

3M TEKK Protection Chemical Splash/Impact Goggle:  I purchased these based upon the reviews and am thrilled with both how they fit and how comfortable they feel.  Highly recommended.

Dynarex Black Nitrile Exam Gloves, Heavy-Duty, Box/100:  This brand is the #1 seller on Amazon.  Pick your size; both Shelly and I wear a medium.

Disposable Protective Coveralls: There are plenty to choose from and as with the gloves, better to be too large than too small.

The Survival Medicine Handbook: A Guide for When Help is Not on the Way: By Joe and Amy Alton, this book will teach you how to deal with all the likely medical issues you will face in a disaster situation, and including strategies to keep your family healthy even in the worse scenarios. It covers skills such as performing a physical exam, transporting the injured patient, and even how to suture a wound. This medical reference belongs in every survival library.

Essential Oils:  The two essential oils I recommend for pandemic preparedness are Shield Protective blend and Oregano.  You can read about oregano essential oil in the article 25 Ways to Use Oregano Essential Oil for Health and Wellness. Note that you will receive an additional 10% off all items from Spark Naturals when using code BACKDOORSURVIVAL at checkout.

How to Grow the Best Antioxidants

How to Forage and Use Purslane & Stinging Nettle: Two Super-Foods for Spring Foraging

6 Responses to “Ebola As Biological Warfare”