A while back, I asked the question: If SHTF, Could You and Would You Shoot Someone?  This article resulted in an outpouring of comments not only here at Backdoor Survival but at Activist Post, SHTF Plan Blog and a couple of other sites that were given permission to reprint the article. 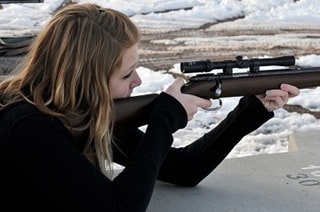 I also received quite a few direct emails.  Today, I would like to share one of the more poignant pieces from an former marine and current member of the law enforcement community in main stream America.

I once used deadly force against an armed robber/rapist.  People analyze the law, and think it will guide them in lethal encounters, but it won’t.  My district attorney was satisfied that my incident was within the bounds of the law, because it was an offender fleeing from a violent crime that I actually witnessed.  Legally of course, he was correct.  But that wasn’t the reason I shot.

I had many people tell me that they don’t know if they could have done it emotionally, because he was running away and I couldn’t have either if he was just running, that is.

But, what “pulled the trigger in my head”, was that he was running with a gun, towards cops that could not see what I had seen.  And furthermore, I knew they were in mortal danger. They were also in a bad position to defend themselves because there were also many innocent bystanders in the area.

The instant that all became clear to me, I fired the shotgun.

For most people, it’s a reaction, similar to what happens when a child runs out in front of you in the street.  Some people brake and/or swerve to miss the kid. They never think about what they did – they just do it. It wasn’t a cold calculated plan that they executed with precision.

Others (very few) freeze with panic and do nothing.  In their panic, they run straight over the child.  The consequences are not pretty.

It’s hard to predict what people will do.

But basically, there is a central thing that should comfort people pondering this.  If you do not see a threat that makes you fear for your life, you won’t **be able** to shoot.  As angry as you might be, no matter what you saw them do, you won’t kill them.   Unless you are sociopath, you simply **will not** shoot them in cold blood.

On the other hand, if a person feels a threat to their safety, or the safety of another, people who never thought they could shoot to kill, do just that and find themselves standing there mystified, after the fact, while holding a smoking gun.

Let me tell you this:  shooting someone feels exactly like NOT shooting them, except for the superfluous detail of a cartridge firing.

Cops often experience aiming at a hardened armed criminal.  As you look down the sights at them, you are waiting to see if they surrender and do what you say, or if they will MAKE you shoot them by grabbing for their gun.  It is a very fine difference, and all of the training and equipping of the cop has placed him there, aiming at the murderer. But the final pull of the trigger is utterly in the hands of the criminal.  For no matter what he has done, the cops (or any normal person) won’t shoot until he presents that final immediate threat.

This is quite literally what separates us from the criminals, gang members, predators and sociopaths.

So if you are not a murderer in real life, get a gun and practice all you reasonably can. Then trust your hard wiring to get you through a bad incident. You simply won’t murder wrongfully, your morals won’t let you.

This is a very powerful thing to know.  Because with this knowledge, you now can clear your head of “what would I do?” and “could I?”.   This frees you to select a gun, shoot it for fun, and get used to operating it. When it’s for real, in a dark, cold lonely place and the kids are counting on you, you’ll do fine.

Now for a few lighter things. (and yes, i shudder at the thought of what this career does to a person):

99% of people don’t barf afterwards either, though this is in every movie, bar none.

The snub nose 357 with the hottest federal 125’s that money can buy, is so nasty that you can’t even stand to shoot it in practice. In a real deal, it will sound and feel like an airsoft BB gun.

Last, my ex had a little 38 in the car when i was in the war. She always said it was silly because she was certain that she could never shoot anyone. But one night she got off a late shift and was headed home. Some man pulled up beside her at a red light and then followed her down a dark deserted road. He finally passed her, and then suddenly blocked her in and began walking back to her car.  She presented the 38 and he stammered and left.  What she said stayed with me.

She said in an instant, when she realized that the predator was going to hurt or kill her, those doubts vanished.  She said **I was going to shoot him**.

Women are often told that guns are manly, macho, etc.  This intimidates many from learning how to shoot a gun. No gun i know of requires any more strength, or hand and eye coordination to operate than an average blow drier. Think about that next time you see a woman blow drying her hair, backwards, in a mirror.  They are literally DUPLICATING a famous Annie Oakley trick shot, all the while thinking they couldn’t possibly shoot a GUN.

So all that to say, if someone grabs a bag of your beans and runs, as much as you hate them, you won’t shoot them as they flee. Yes it impacts your survival for a few weeks, maybe longer.  But that won’t make you shoot.  Likewise, when in a lifeboat, you’ll kill someone who starts to puncture the raft, but you won’t kill them if that same someone drinks too much water while you were asleep.

Let me repeat:  if your are in your remote home, and a stranger shows ill intent to you or your family, you will shoot. And you’ll be fine.

Happily, and sadly, it’s one of the easier topics in your blog.  Learning to make, store, grow, and cook food is much more technical.  Maybe it’s not as sexy as taking the assault rifle out to play at the range, but that’s the way it is.

Needless to say, this email stuck a chord personally and challenged me to re-evaluate the issue of shoot – no shoot.  In the meantime, Shelly (the Survival Husband) has obtained his concealed weapons permit and has taken some supplemental firearms training.  Now it is time to practice and practice some more

And yes, I am thinking long and hard about taking that step myself.  As I prepare to step into this mind shift, I ask that you share this article with someone you know, man or woman, that is facing this same “could you and would you shoot?” conundrum.  Perhaps they too will begin to see that this is not a yes or no question, but instead it is a simple maybe.

Update:  I, too, have received some training and have my concealed permit.  More training to come in April 2014 – a full week at “shooting camp”.

If you have not done so already, please be sure to like Facebook which is updated every time there is an awesome new article, news byte, or link to a free survival, prepping or homesteading book.  You can also follow Backdoor Survival on Twitter, Pinterest, and Google+.

Couple being a good neighbor and with strong primary defenses and you have a winning combination. Here are some items to consider as you build up your fortress.

Dorcy LED Wireless Motion Sensor Flood Lite: This light is awesome. I use mine downstairs as well as on my stairway and when I get up in the middle of the night, they come on automatically. They are quite unobtrusive and give off a ton of light.  Runs for a year on 3 D size batteries.

Holding Your Ground: Preparing for Defense if it All Falls Apart: This is a really good book from Joe Nobody – a book you should read if you care about defending your homestead.

Midland 36-Mile 50-Channel FRS/GMRS Two-Way Radios: These are the handheld radios that I own. There are lots of good uses for the these radios. Handy while hiking, traveling, or simply keeping in touch with your partner while out shopping. They are waterproof – a quality that I feel is important. Plus, in addition to using the included rechargeable batteries, they can use regular AAs in a pinch.  Note: the true range for this type of radio is actually 4 to 6 miles, regardless of brand.  Don’t be fooled.

Two-Way Radios and Scanners For Dummies: I will say it again.  Yes, I love these books for “dummies” even though I actually think I am quite smart.

Security Decals – 4 Pack: Security surveillance camera system warning decals/stickers. Increase security whether you have a system or not -no one will know but you.

Keypad Deadbolt: Need a good strong lock? With this, you will never have to worry about locking yourself out plus, you can secure the deadbolt from inside the house.

Motorola FRS/GMRS Two-Way Radios: Another option to consider. There are lots of good uses for the these radios. Handy while hiking, traveling, or simply keeping in touch with your partner while out shopping.

How to Use Pool Shock to Purify Water

29 Responses to “Can Nice People Shoot?”