A small part of each of us harbors a lack of trust in those organizations and agencies empowered to keep us safe.  This, I am afraid, is a 21st century reality.  While it easy to point fingers and play a blame game, it is my opinion that we are better served by fostering self-reliance so that we can depend upon ourselves and not on third parties.

The latest entry in the Backdoor Survival Prepper Book Festival 9 is a work of fiction titled New Recruits (The Shadow Patriots Volume 2).  It starts with the following quote by Frederick Douglass:

“The limits of tyrants are prescribed by the endurance of those whom they oppose.”

From that, you get the general idea, right? 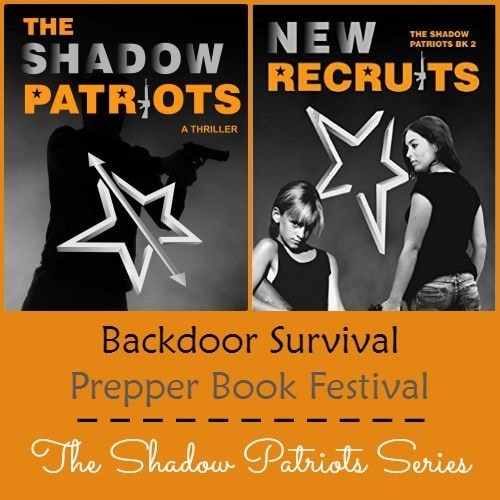 Today I share an encore interview with Warren Ray, the author of New Recruits.  In addition, Warren is generously offering both books in the Shadow Patriots series to three Backdoor Survival readers.

Enjoy the interview then be sure to check in below to learn about the giveaway to win a copy of both The Shadow Patriots and New Recruits.

An Interview with Warren Ray, Author of The Shadow Patriots Series

I’m constantly encouraging my family and friends to buy food storage and for five hundred dollars, depending on where you purchase it, you can easily buy six months of freeze dried food for one person or three months for two.

Then go get some five gallon water containers.  These are the easiest things to do for the novice.

I’m not a serious prepper, so no, I’m not as prepared as most people who are readers of your blog.  I do what I can where I can, but I’ve been on the road promoting my novels for the past year.  I have a go-bag in my trunk with enough to get me through a small emergency.

What is your favorite survival or prepping book?  (It can be fiction or non-fiction.)

My favorite survival book is called The Shadow Patriots by Warren Ray.  Hey, that’s me, if it sounds like I’m pandering, I am.

Everyone has an opinion on what’s going to happen to our country and I’m no different.

The current path we’re on cannot be sustained and if we continued to go down this path, at some point, we, as a country will fall down. It could be next year or the next twenty years.  When and how far we’ll fall is anyone’s guess.

My book series explores this possibility and what people are capable of doing, both good and bad.  It looks at how some people will take advantage of the situation, some will shrink away, while others will stand tall and do the right thing.

Warren has reserved three copies of both of his books, The Shadow Patriots and New Recruits for lucky Backdoor Survival winners.  Yes, that means there will be three winners!

The deadline is 6:00 PM Pacific Tuesday with the winner notified by email and announced on the Rafflecopter in the article.  Please note that the winner must claim their book within 48 hours or an alternate will be selected.

I don’t know about you, but I hope I am never forced to choose between defending myself and my home, or defending my country.  That would be an impossible decision since, during normal times, home, family and country would be one and the same.

Learning to cope during Impossible situations we can do vicariously by reading books in the survival fiction genre.  Practicing those coping skills day to day is a much tougher nut but do so we must, one tiny step at a time.

I do hope you take a few minutes to enter the giveaway; you are going to love the books!

The journey continues for Cole Winters and the Shadow Patriots as they discover a deviant activity that forces them to change their plans and deal with a new despicable nightmare.

The stakes are even higher as they put their lives at risk to save the most vulnerable. While on their conquest, they discover Islamic terrorism is in America and it’s led by a wealthy Saudi Prince trying to stake a claim in the Midwest. Meanwhile, Major Green who has been transferred to Washington D.C., has pledged to help the Shadow Patriots, as he works for the new National Government.

Green puts his life and the life of his mother on the line as he pieces together the inner workings of the conspiracy that has overtaken America. From South Bend Indiana, back to Canada and throughout Michigan, you’ll meet new characters and cheer on Cole Winters, who will need every ounce of courage as he races against time and impossible odds as the National Police and terrorists are hot on his trail.

No list of books would be complete without my own book, The Prepper’s Guide to Food Storage.  The eBook print version is available