Sometimes things can get pretty funny here at my house.  Take last weekend, for example.  Survival Husband and I decided to package up 25 pounds on Pinto Beans in the Mylar bags.  You might recall that I wrote about the process last month in the article Food storage and Beans: Using Mylar bags and a Food Saver.

Being a smarty pants, I decided to modify the technique that was described in the video in that article.  Instead of following my own advice, I used a process I found at the Emergency Essentials website.  And when that did not work, S.H. and I improvised,  making up our own technique. Ha!  We were like Lucy and Ricky in the old I Love Lucy show as beans were flying all over the place and bags were getting cut down to size and re-used as mistakes were made.

Finally, I went back to the original video, watched it again, and started anew.  After an hour of mistakes, false starts, and friendly verbal abuse between us, we were able to package up 25 pounds of beans in less than 15 minutes.

So how did we do it?

First of all, we extended the accessory hose of our FoodSaver with some extra tubing.  It was late on a Saturday afternoon but the marine store was open and they gave us some tubing that, with a bit of duct tape, extended our hose by about 12 inches.

Next we filled our 1 gallon Mylar bags to within two inches of the top and added an oxygen absorber.  (The oxygen absorber came packaged with purchased bags.)

Note that I said 1 gallon bags.  We felt that for our purposes smaller was better.  That way if we need to get in to our emergency food supply for any reason, we will have manageable quantities and will not have to break into a huge, 25 pound bag simply to get us through a two week long power outage.

The next step was to stick the end of the tube into a corner of the top of the bag and while holding it (the tubing) in place, use an iron to seal the top two inches of the bag

Still holding the tube on place, we pressed the canister button on the FoodSaver and like magic, all of the air was sucked out.  Coolness!  Now we were getting somewhere.  When the air was gone, we carefully removed the tube while moving the hot iron over the hole to make a final seal.

As you can see, we ending up with 5 “bricks” of beans,  each weighing approximately 5 pounds.  There is no question that at this point we were filling pretty darn smug.

The final step was to seal up a jar of beans for current use and also – very important – to seal up the unused oxygen absorbers so that they won’t start doing their oxygen absorption thing on their own. 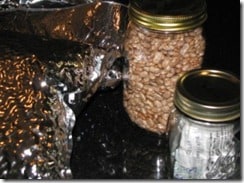 Now isn’t this a pretty sight?

So there you go.  This was really easy once we got the hang of it. Before trying this yourself, make sure you have the right type of FoodSaver – that is, one with an accessory port.  Plus, get yourself some tubing at the hardware store.  It should run about 15 to 20 cents per foot.  Keep your sense of humor, recruit your spouse, a neighbor, or a significant other to help, and reward yourself with a nice glass of wine when you are done.

Enjoy your next adventure, wherever it takes you!

Backdoor Survival Tip of the Day:  This is a dancer’s trick.  If the inside heels of your shoes tend to stick together, rub a little Vaseline in to the leather.  You only need to do this every couple of months but I promise you, your heels will not stick together when touched.

(SurvivalHusband landed smack on his fanny on the dance floor when his heels stuck together.  No more.  He now carries a little jar of Vaseline in his pocket when we go dancing.)

From the Bargain Bin:  A couple of readers have asked me how I use the FoodSaver to seal jars.  I use the FoodSaver Wide-Mouth Jar Sealer which attaches to the accessory port with regular canning lids.  The nice thing is that both the jars and the lids are re-usable.  There is something uniquely satisfying about opening a sealed jar and hearing that distinct “pop”.

Be prepared with emergency supplies from Emergency Essentials

.  If you have the bucks and the space, I highly recommend a water barrel (or two!)

2 Responses to “Getting Prepared Week 20: Hands on with Mylar Bags, Beans and the FoodSaver”