The BattlBox is an awesome concept for gear junkies. For a subscription fee at one of several tiers, you get a box of survival gear every month, many of them curated according to a specific theme. While I imagine there has to be overlap in terms of the gear provided – for example, I imagine you’d accumulate a great many pocket knives after a while – the excitement of getting a new cache of gear every month is the perfect fix for gear junkies. If you’re going to spend money on all kinds of new gear anyway, this is a way to satisfy your addiction at a lower overall cost.

In my experience, the biggest gear junkies tend to be men, and BattlBox’s branding definitely skews male. But in spite of that, BattlBox is potentially also a very useful solution for individuals and families who want to automate the process of building more robust emergency and bug-out kits. More on that later.

BattlBox sent me a “Civil Unrest” themed box in their “Pro Plus” tier, which contains everything the lower tiers contain along with a knife of the month.

If you are looking to save, our current promo code on BattlBox is SUMMER10 to save 10% on your first box. 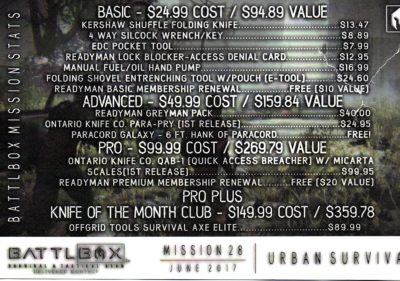 What’s in the Box?

Each BattlBox is different, and you never know what “Mission” will arrive next. I got a” Civil Unrest” themed box, and upon reading the “Mission Stats” printed on a card in the box, I had to laugh. That’s because, as truly useful a lot this gear is for everything from camping and survival to everyday use, absent an actual societal breakdown, it sort of looked like a starter pack for criminal vagrants.

With items like a pump to steal gasoline, a wrench to steal water from commercial buildings, and a set of special keys to barricade yourself into houses while locking out the original occupants, the stuff would definitely be handy for surviving in a post-collapse urban wasteland.

As society marches on with reasonable levels of law and order, however, the Civil Unrest box also seemed comically perfect for beginning a new career in petty crime. Joking aside, all the included gear is high-quality and could be potential life-savers in an emergency, even if that emergency didn’t include anything as extreme as a zombifying pathogen or EMP attack.

Here’s what came in my Civil Unrest BattlBox, courtesy of their informational insert. It shows which items are included under each subscription tier: Basic, Advanced, Pro, & Pro Plus. 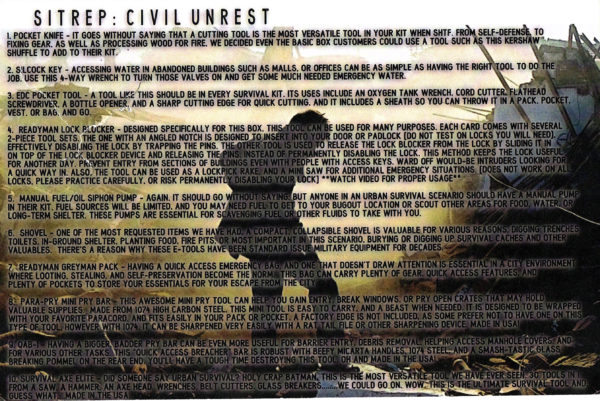 Let’s break down each of the tools.

This small but excellent knife fits perfectly in my hand. Aside from the 2.4 inch blade, the knife features a pocket/belt clip, bottle opener, and flathead screwdriver that doubles as a lanyard loop. It’s a high-quality and very practical addition to this BattlBox.

This key has four hexagonal sockets, allowing you to access exterior water compartments on buildings and get water flowing from the tap. This makes it a potential game changer in an urban survival situation, and a good addition to car emergency kits as well.

This is an impressive little tool. It has a wrench for opening and closing oxygen tanks, a cord cutter, a flathead screwdriver, a bottle opener, and a knife edge. Once I sharpened it the knife edge worked well shaving some wood for tinder, making it a formidable piece of equipment for its size. It also stores securely in a hard plastic sheath. 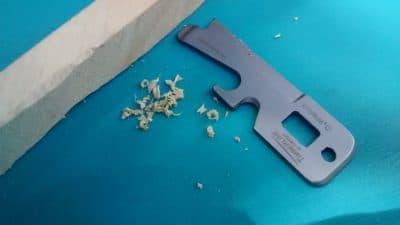 Designed as a card with eight blockers and eight extractors, this tool gives you lock blockers to deny access to a building, even if someone has a key to get in, and then remove the blocker with an extraction key. It’s a little difficult to use, especially when you’re trying to get the blocker out, and can damage locks permanently, so you have to be careful with it. But for a civil unrest situation, it would be an undeniably powerful security tool.

Beyond disaster scenarios, it still has plenty of other uses – for example, a landlord with disgruntled past tenants could use it to deny access until the locks are changed.

Described as a fuel and oil pump, this is a nice little piece of equipment that you could just as easily use to pump water into a filtration system or any other application where a pump would be handy.

I didn’t use the pump to steal anyone’s gasoline, as I didn’t want to occur the wrath of the Lord Humongous (that’s a Max Max reference, for those who aren’t familiar), but it worked as advertised on some water I pumped from a puddle into a bucket.

This is the smallest folding shovel I have ever owned. When you pack it up into the included case, complete with belt loop, it becomes small enough that it fits in the palm of my hand. Put it together, and you have a formidable shovel with a pick on the end and a serrated edge for sawing away at roots.

This little guy is now my go-to shovel for camping and backpacking, as it’s substantially smaller and lighter than my other folding shovels without sacrificing toughness. You could probably even fit it in your car’s glove box or door compartments.

This is a great little 18-liter pack. The clever design allows for quick access without making it feel like your stuff is going to fall out. It’s low-key, so it wouldn’t draw much attention during a collapse scenario. 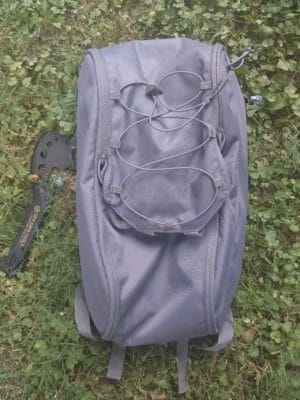 It’s roomy, but small enough so that you could run, jump, climb, or even fight without feeling encumbered. It has an exterior elastic draw-cord to stuff your rain gear, water bottle, or other item on the outside, as well as a narrow side compartment that’d be ideal for a water filtration straw, a couple of VSSL canisters, or other item. 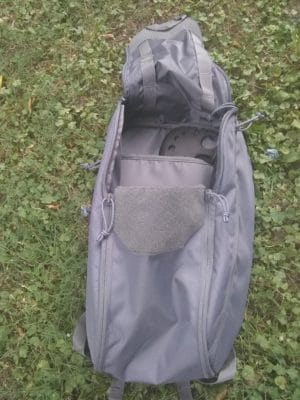 An interior laptop compartment is great for a computer, tablet, or just anything you want in a separate section of the pack. It’d make a phenomenal bug-out bag once filled with your essentials, but is versatile enough for ordinary day-to-day uses.

These are super-strong, solid pry bars. They can be sharpened to make the dull blades chop-worthy, but I’m keeping mine dull and using them for good old-fashioned prying and cranking. 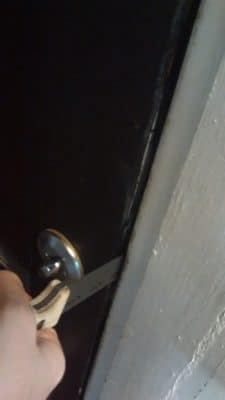 Simple but effective. Some paracord is included, which I wrapped around the handle of the smaller one.

The Survival Axe Elite is a 30-tool survival axe with a ton going on. Most of the features are great and others fall disappointingly flat, but overall I found it to be an impressive survival tool. The thirty features it includes, as described by the package insert, are: 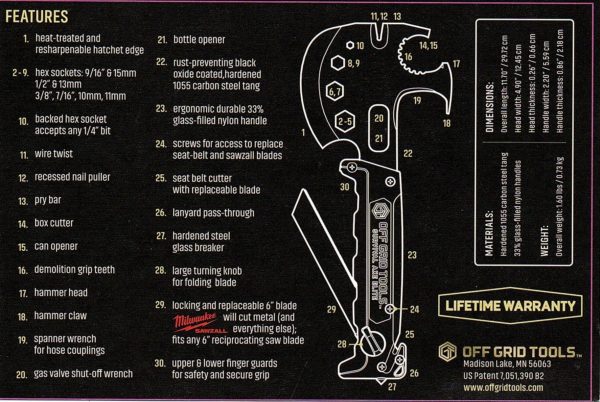 Most of the tools are well-integrated, and do the job they are supposed to do. When I looked at other people’s experience with the tool, I found some online reviewers were dismayed that their hammer heads broke off during use.

When testing the head myself, I used it to chip away at a small boulder and then at a chunk of cement, and had no problems. This tool could have turned the whole cement chunk to dust if I’d kept going.

Hacking at the concrete also generated sparks, which is good to know for fire-starting purposes and potentially adds a massive bonus feature to the Survival Axe Elite.

After sharpening the axe blade, it split a log with extreme ease. 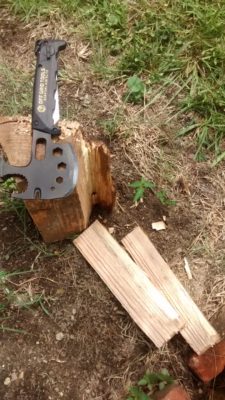 The glass breaker did its job as well, popping holes through glass of varies thicknesses with no resistance, and the variety of hex sockets built into the head are a clever way to turn this tool into a multiuse wrench.

The one truly major issue with the Survival Axe Elite is the integrated saw. The saw blade itself feels strong and high-quality, but the way it nestles in the handle of the axe leaves a lot to be desired. First off, the mechanism to unfold the saw from the handle is made of plastic and feels cheap. It claims to be a locking mechanism, but even a gentle swat to the dull side of the opened blade causes it to flip back in, so there’s no actual locking function at all. 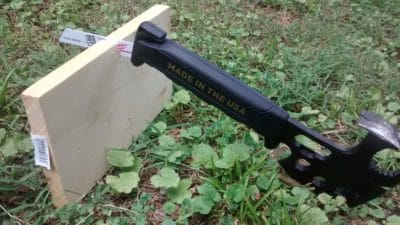 The cheap feel to the saw makes it a little bit scary to use. I didn’t have confidence that if I slipped a little, or had to crank really hard, that it would stay put. I’ll mostly forego using the saw at all, which is a shame, because if it felt more solid it would be a fantastic addition to the product. As a customer, I would be very disappointed that the saw felt too sketchy for me to comfortably use.

Lastly, the axe doesn’t come with a sheath. This is fine when it arrives, as the blade isn’t very sharp, but after sharpening the blade I definitely want a sheath to store it in. This is a relatively minor issue, but it seems like some kind of sheath should come standard.

For their part, Off Grid Tools appears to be very responsive to the design criticisms and is reportedly already working on a new and improved model of the Survival Axe Elite that addresses these issues. Given the time and money that costs a company to do, it says a lot about their attitude that they are being so responsive to concerns raised by their customers.

The BattlBox is an obvious win for gear junkies. I don’t consider myself part of that category, and I’d still be buzzing with excitement when each month’s BattlBox was due to arrive on my doorstep.

But there’s a definite appeal for the average prepper-next-door type as well, especially those interested in putting together bug-out bags or emergency kits for every member of their family.

The subscription model allows you to build out survival kits for multiple people for less than it would cost to buy equipment piecemeal. Over a few months of their premium “Pro Plus” subscription, you’d probably already have enough gear to put together survival packs for four people with basics like knives, blankets, fire-starting gear, and water purification equipment.

If you can’t afford Pro Plus, even the Basic tier included a surprising amount of equipment and is a great value for the gear you receive. You can also upgrade or cancel your subscription any time you want.

Eventually you’d all end up with very well-rounded kits for a variety of situations; you just have to be okay with the fact that you don’t know what BattlBox is going to send next. Some folks won’t be comfortable with that trade-off. While supplies and selection are limited, Battlbox does allow subscribers to purchase past boxes, which may help offset the issue of not being able to choose what you get next.

Overall BattlBox is a lot of fun, and sends high-quality gear that any preparedness-minded person would drool over. If you’re the type who doesn’t mind adding a little bit of surprise to your survival equipment shopping, it might be the perfect trip.

The Year of the Prepper: 10 Tips for Beginners

Garlic: A Powerfully Effective Herbal Remedy You Don’t Want to be Without