That’s right, there will be three winners! 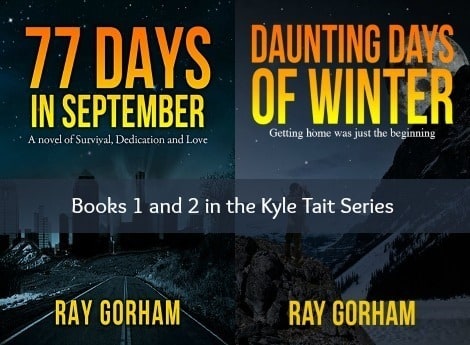 Before I turn things over to Ray and his interview, I feel compelled to mention that as recently as last week, scientists were warning that an attack on the US power grid is not something to disavow.  It could happen and if it does, we will, as a nation, be woefully unprepared to be thrown back to a time when technology as we know it did not exist.

As Ray describes in his books, “the road back home is a long one and the obstacles are great”.  It is my opinion that the more we read about fictionalized tales of survival, the better we will be able to plan for our own “rescue” should the unthinkable happen.

An Interview with Ray Gorham, Author of 77 Days in September

Tell me about your book, 77 Days in September. What is it about?

77 Days in September is the story of a guy from Montana stranded in Houston after a successful EMP attack, and his ordeal trying to return home to his family. It’s done from the perspective of an average guy who is not prepared to deal with the new reality and how he flounders while trying to survive.

Most of the research went into EMP’s and the impact they’ll have on our society. Beyond that I had to try and come up with a realistic route and scenarios for the characters to endure.

First draft took me about 6 months to write, then another 6 months of rewrites and polishing. Still not perfect, but it’s in pretty decent shape, with much thanks to my patient wife for all her efforts editing it.

Every book, fiction, and non-fiction includes a message. What message do you hope my readers will take with them after reading 77 Days in September?

I guess I have two messages in this book. First is that modern society is just a small nudge away from a pretty bleak future, and that ultimately the only one looking out for ourselves is us. When things get bad there won’t be anyone there to take care of us. The other message is about love and family, and what price a person will pay to have that in their life.

I’m just a normal guy living in Montana, building log homes, and trying to help my wife raise our five kids. 77 Days is my first novel, and while I’m no Steven King, I think it turned out alright.

I’m prepping for an EMP. I figure that’s about worse case, so if I’m ready for that I’ll do okay no matter what comes along. I’ve got stacks of canned foods, a large garden and orchard, beehives, guns, and a wood stove. Hope I never have to rely on them, but if I do I can probably struggle through.

Yes. I have a sequel to 77 Days in September, called Daunting Days of Winter, and I’m also halfway through a first draft of a book that takes place 15 years after a massive pandemic. With the Ebola thing going on I’m kind of wishing I already had it done. At least that will raise awareness when I get it out there.

77 Days in September is not a how to manual, and the characters frustrate a lot of hard core preppers because they are pretty clueless.

I wrote it more as an effort to alert people who are unaware of our vulnerability to such a devastating possibility, and have had lots of comments from people who said they were going to start prepping. I think it makes a great read for people who don’t see the need to do anything to prepare themselves for disaster, as well as for people who just want to meet some decent characters.

Two eBooks in the Kyle Tait series, 77 Days in September (Book 1) and Daunting Days of Winter (Book 2) have been reserved for three readers.  To enter the giveaway, you need to utilize the Rafflecopter form below.

The deadline is 6:00 PM Pacific next Tuesday with the winner notified by email and announced on the Rafflecopter in the article.  Please note that winners must claim their eBooks within 48 hours or an alternate will be selected.

An  EMP initiated by terrorist organizations could set up back 200 years or more.  I don’t know about you, but I am making up a list of those things that would impact me most if an EMP were to occur. Give some thought to that giveaway question; it is an important one.

If you enjoyed this article, consider voting for me daily at Top Prepper Websites!  In addition, SUBSCRIBE to email updates and receive a free, downloadable copy of my e-book The Emergency Food Buyer’s Guide.

In Book 1, Kyle Tait is settling in for his flight home to Montana when a single nuclear bomb is detonated 300 miles above the heart of America. The blast, an Electro-Magnetic Pulse (EMP), destroys every electrical device in the country, and results in the crippling of the power grid, the shutting down of modern communications, and bringing to a halt most forms of transportation.

Kyle forges his way home, his frightened family faces their own struggles for survival in a community trying to halt its slow spiral into chaos and anarchy.

In Book 2, having survived the harrowing, cross-country journey home to his family, Kyle must now struggle for existence in a post-EMP world that no one could have imagined just three short months prior. Follow Kyle, Jennifer, and the citizens of Deer Creek, MT as they plumb the depths of their resourcefulness, strength, endurance, and humanity while struggling together to survive the daunting days of winter.

Bargain Bin:  For your convenience, here is a list of all of the books in the current Backdoor Survival Book Festival.

Liberators: A Novel of the Coming Global Collapse
77 Days in September and Daunting Days of Winter
Good Crazy
Point of Crisis
Avalon: The Retreat and Avalon: Beyond the Retreat
Rebellion in Northwoods
Prepper Pete’s Twelve Days of Prepper Christmas
Prepper Pete’s Gun of a Son: A Gun Safety Book for Kids

Book Festival and Giveaway: An Interview with Anna Hess