It was not that long ago that the country of Greece suffered a devastating collapse of their economy.  At the time, there was a lot of blame game going on but, at the end of the day, it was years of irresponsible and unrestrained spending that took them down.  That, coupled with questionable accounting practices and misstated economic indicators left the Greek citizens befuddled and angry when the reality of depression hit.

Could the same thing happen here?  Not to be depressing but in going through my own thoughts as I answer the question “What am I least prepared for?”, I realized that it was time for a wake-up call and time to re-evaluate my own preps within the context of an economic collapse. 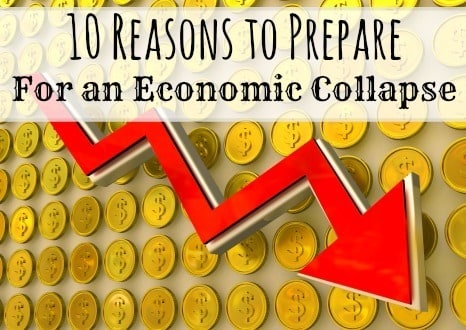 Looking back at what happened during or our own Great Depression, I have come to realize that an economic collapse, if it were to happen, would have the compound effect of combining all woes we so diligently prepare for into one huge mess – a mess that may take decades to resolve.

I worry about this, because, as prepared as I may be, I find it difficult to wrap my head around a mega collapse that will result in food and water shortages, power outages, civil disobedience, medical anarchy, and worse.

A global economic collapse, unlike a natural disaster which, as tragic as it may be, is a short term event, will change our lives forever.

Time for a Wake-Up Call

Back in 2012, Michael Snyder wrote about the lessons we can learn from the financial meltdown in Greece.

At the time, being a prepper in the United States typically branded you as a nut job.  Now that preparedness has become more mainstream, I feel that we should review those lessons and take another look at the ramifications of an economic collapse.

Here are the 10 lessons along with my own thoughts as they might apply to an economic collapse in 2015 and beyond.

10 Reasons Why We Need to Prepare for an Economic Collapse

Most people assume that they will always be able to run out to their local supermarket or warehouse club.  Those of us that prepare, know better. It is those folks that do not prepare that we need to worry about.

2. Medicine Is One Of The First Things That Becomes Scarce During An Economic Collapse

When credit systems and distribution channels are compromised, medical supplies will not make their way to the local pharmacy.  Any medicines and supplies that are available will likely be diverted for use by the power elite.  Sorry to be such a cynic but we all know that there are privileged classes that have the power and the means to get whatever they want, even if it means denying the rest of the population with their fair share.

3.  When An Economy Collapses, So Might The Power Grid

No money to pay workers and no fuel to fire the grid translates into no grid at all.  Going without power for a week or two is one thing but going off grid for months or even years?  We are a soft society accustomed to our comforts.  Without the grid, our lives will be quite different than the life we live today.

4.  During An Economic Collapse You Cannot Even Take Water For Granted

When the grid goes down, so goes the water treatment facilities that ensure that clean water flows from our faucets.  I survived 12 days without running water.  Do-able yes.  Fun? Hardly, but I knew the water would come back on eventually. What if the water never came back on?

5. During An Economic Crisis Your Credit Cards And Debit Cards May Stop Working

Same thing.  If the grid is down, our banking system will basically be down too.  This means that credit cards and debit cards will be useless to transact business and make purchases.

6.  Crime, Rioting, And Looting Become Commonplace During An Economic Collapse

This is not a maybe.  The haves will need to defend their property from the have-not’s.  I also suspect that the “haves” (aka preppers) may have to defend themselves from government looters.  It will be every man or woman on their own; defending what is theirs.

The young and healthy might be able to handle this but what about the elderly, the sick, and the disabled?  Even if they prep, how will they defend themselves?

7. During A Financial Meltdown Many Average Citizens Will Start Bartering

Without credit cards, debit cards, and quite possibly currency, a barter economy will emerge.  By the way, the best description I have read relative to how such an economy will work was is James Wesley Rawles book, Patriots.

Things will definitely fall apart during an economic collapse. Having supplies and especially skills to barter with not be an option.

8. Suicides Spike During An Economic Collapse

This happened in the 30s and it will happen again. When people no longer have hope, they feel that life is not worth living.  My guess is people will start jumping out of buildings and may take family members with them in a suicide pact.

9.  Your Currency May Rapidly Lose Value During An Economic Crisis

Let me take this one step further.  Your currency WILL lose value during an economic collapse.  It happened in Germany during the Weimar Republic and it has happened more recently elsewhere around the globe.  We are not immune to runaway inflation coupled with the devaluation of our currency.

10. When Things Hit The Fan The Government Will Not Save You

If you think that the government will come to the rescue of those that are suffering think again.  Remember the aftermath of Katrina?  Remember Super Storm Sandy?

It is foolhardy to believe that government assistance of any type will become available following a collapse. History has demonstrated over and over again that governments cannot be counted on when things hit the fan. You will be on your own so you better be ready mentally to accept that reality and the tough times that will ensue.

If you have made it this far you might be thinking “Gaye, we know all of that.  That is why we prep.”.

Agreed; I am preaching the choir.  But, that being said, the overwhelming ramification of having all of these things happen at once will be a blow to the psyche that is of greater magnitude than anything you can imagine.

Think about it.  To prevail following a collapse you will still need to get up in the morning, go about your chores, and go about the business of living.  This is going to take a level of fortitude that I can not fathom.  Heck, there are some days, during these modern, comfortable times, that I can barely face the day and all of its challenges.

So where do we go from here?  What solutions are there to get you through to that mental place you know you will need to go to?

Three things you need to remember are:

1.  Only you can be counted on to take care of yourself and your family.
2.  Leaning coping skills during times of calm will give you a heads up on coping during times of crisis.
3.  Give yourself permission to worry, to be concerned, and to be a bit afraid.  This will keep you alert and on your toes at all time.

At the end of the day, those that prepare will be in it for the ride.  The real question is whether we have the mental fortitude to get there without losing are path along the way.

How To Get A Reluctant Significant Other To Prep

The Plight of the Senior Prepper

What To Scavenge During and After Collapse and TEOTWAWKI

20 Responses to “10 Reasons to Prepare for an Economic Collapse”